Radford, the swinging sixties coachbuilder best known for creating bespoke Minis for the Beatles, Peter Sellers and other celebrities, has made a comeback in 2021 – and its first new model is going to be something a little special.

Under the guise of new owners, who include 2009 F1 champion Jenson Button, TV vehicle restorer Ant Anstead and designer Mark Stubbs, it has unveiled its Radford Type 62-2 – a modernised road-legal version of the 1969 Lotus Type 62 racer.

Just 62 examples will be built and they are set to be so unique and tailored to each customer that Radford says it can’t put a price on it.

Radford’s reimagined racer for the road: This is the new Type 62-2, the returning coachbuilding brand’s bespoke new model based on the iconic Lotus Type 62

The reborn brand showcased its plans for the boutique-built motor this weekend at the Lyon Air Museum in Orange County, California.

The supercar will be powered by a supercharged 3.5-litre V6 engine currently used in the Lotus Exige and will mark the first Radford coachbuilt creation for more than half a century.

It will be sold in three varying specifications, with the choice of levels of performance – and pricing – depending on how extreme you want your sixties racing car for the road to be.

An entry-level ‘Classic’ trim option comes with 430bhp and a six-speed manual gearbox.

It will be sold with forged alloy wheels – 17 inches up front and 18 inches at the rear – and use adjustable coilover suspension, Michelin Pilot Sport Cup 2 tyres and AP racing brake calipers and iron discs.

There will also be a unique electronic stability programme to modulate power and grip designed by Bosch. 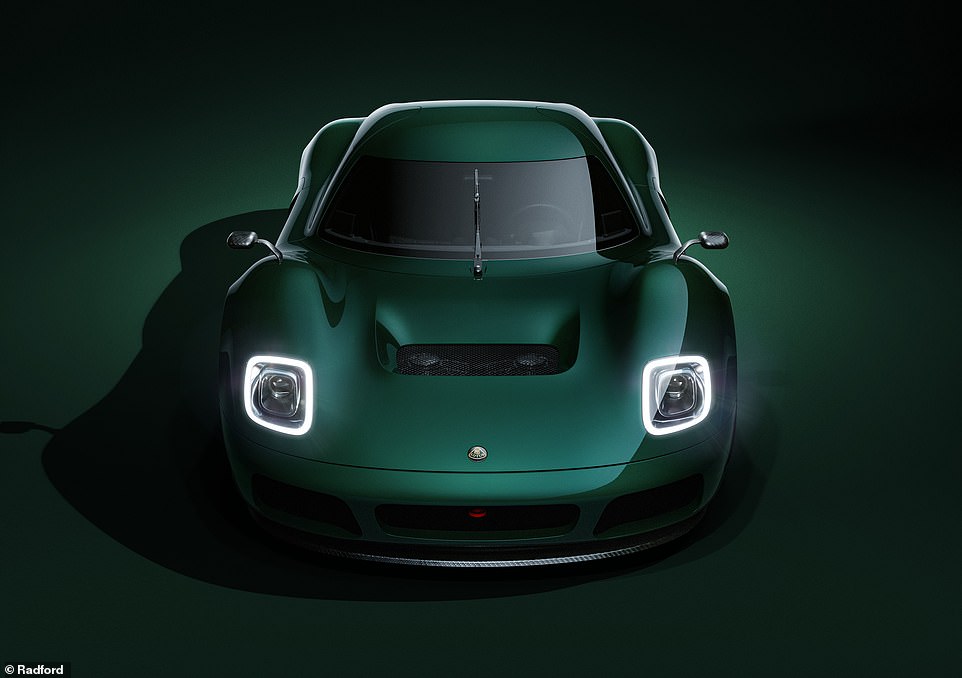 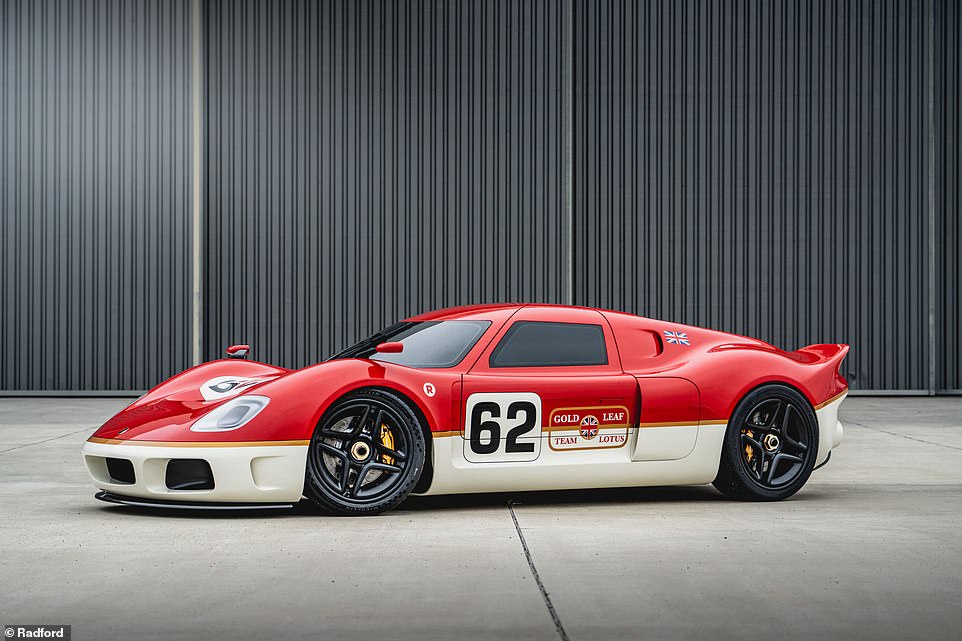 The mid-spec option is the ‘Gold Leaf’ will have its six-cylinder engine upgraded to 500bhp with the addition of stronger con-rods, new pistons, more aggressive camshafts, a remapped ECU and a titanium exhaust system 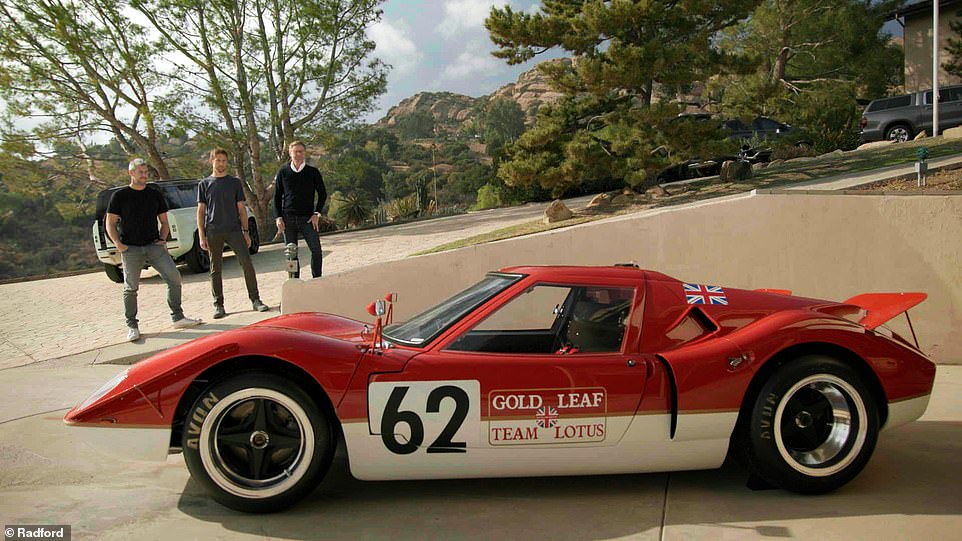 The three partners behind the rebirth of the Radford brand (left-to-right, Anstead, Button and Stubbs) feast their eyes on the original Type 62 Lotus racer that their new supercar pays homage to 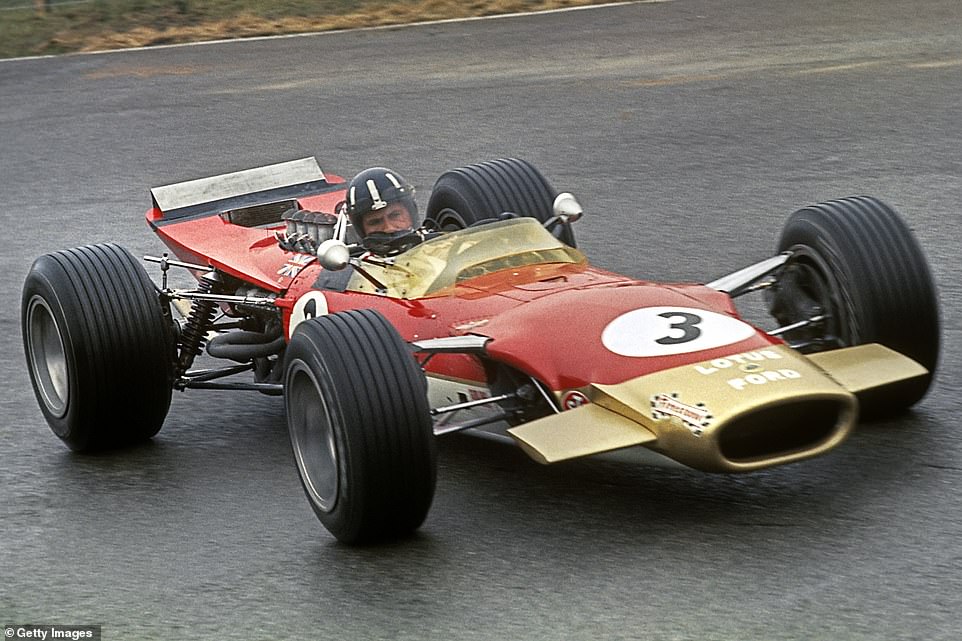 The mid-tier version is called the ‘Gold Leaf’, which will sport the iconic red-and-white livery of Graham Hill’s 1968 Lotus Type 49B Formula One racer.

The six-cylinder engine will be upgraded to a more potent 500bhp output with the addition of stronger con-rods, new pistons, more aggressive camshafts, a remapped ECU and a titanium exhaust system.

Customers will get the option of a sharp-shifting seven-speed dual-clutch gearbox.

It also receives upgraded two-piece forged aluminium wheels that are an inch larger in diameter on each axle compared to those fitted to the Classic trim – though are still lighter.

A motorsport-derived traction control and ABS system – honed by Jenson Button – will also feature to control the extra engine performance. 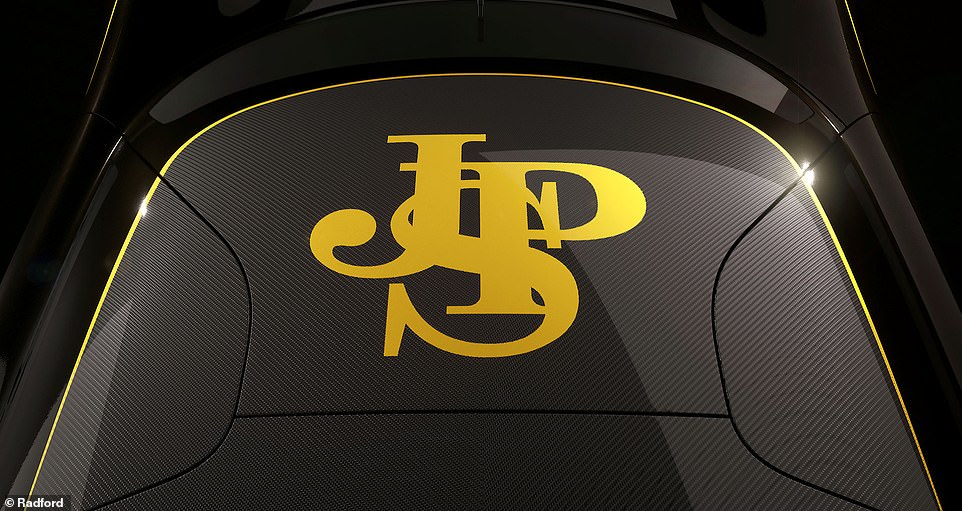 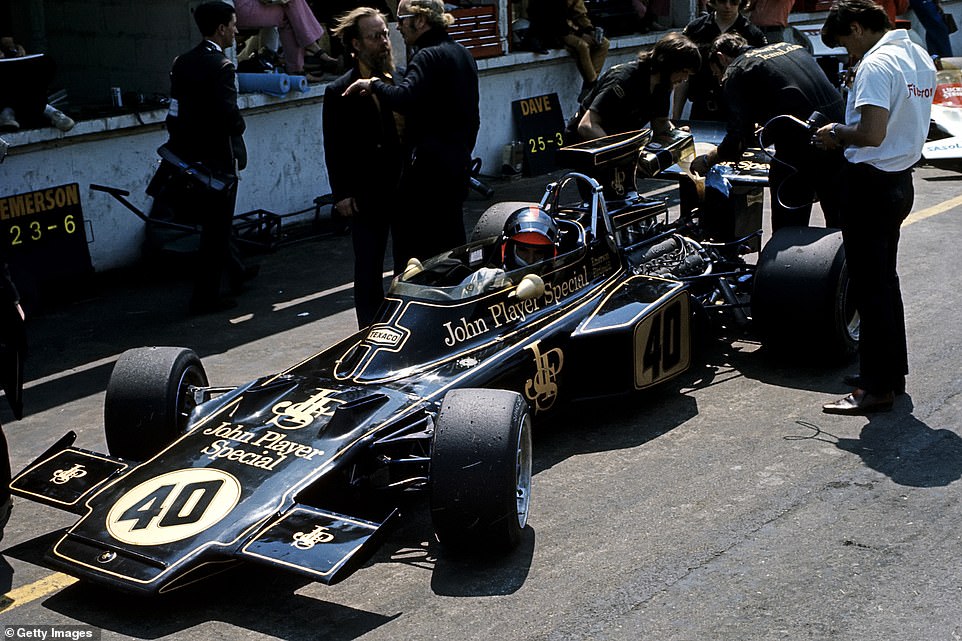 The most powerful Type 62-2 is a ‘JPS’ version with 600bhp and the same stunning livery used on Emerson Fittipaldi’s championship-winning Lotus-Ford 72D, pictured here during practice for the Grand Prix of Great Britain at Brands Hatch on 15 July 1972

Finally, the top grade examples will be the ‘JPS’ variants.

Having recently purchased the rights to use the legendary John Player Special black and gold livery, Radford will use the stunning scheme used on Emmerson Fittipaldi’s 1972 championship-winning Lotus Type 72D F1 car for its most powerful 600bhp Type 62-2 with all the bells and whistles.

While the top-spec gets the same chassis setup as the Gold Leaf version it has even lighter carbon composite wheels, monobloc calipers and carbon ceramic brake discs.

The team behind the limited-run car promise that the V6 engine will make a decent rumble, too.

‘The sound of the Type 62-2 even at idle is something really special. But when you begin to explore the rev range further up, it becomes incredible, raising the hairs on the back of your neck and putting a big smile on your face,’ Button says.

‘However, the unique thing about this engine is that we’ve kept it pure, no exhaust valves, no trickery of any kind – what you hear is uncorrupted and utterly authentic – just like every single element of the driving experience.’

Underpinning each model will be a Lotus platform, with a modified version of the bonded aluminium chassis from the Elise and Exige sports cars. 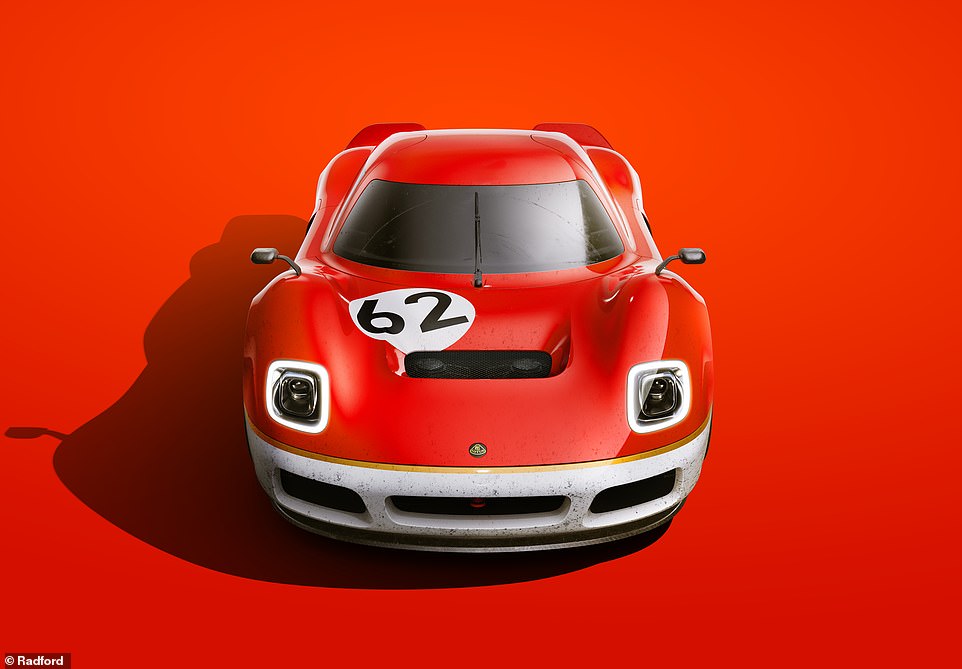 Only 62 examples of the Type 62-2 will be created, with production due to start at the end of this year and first deliveries arriving in early 2022 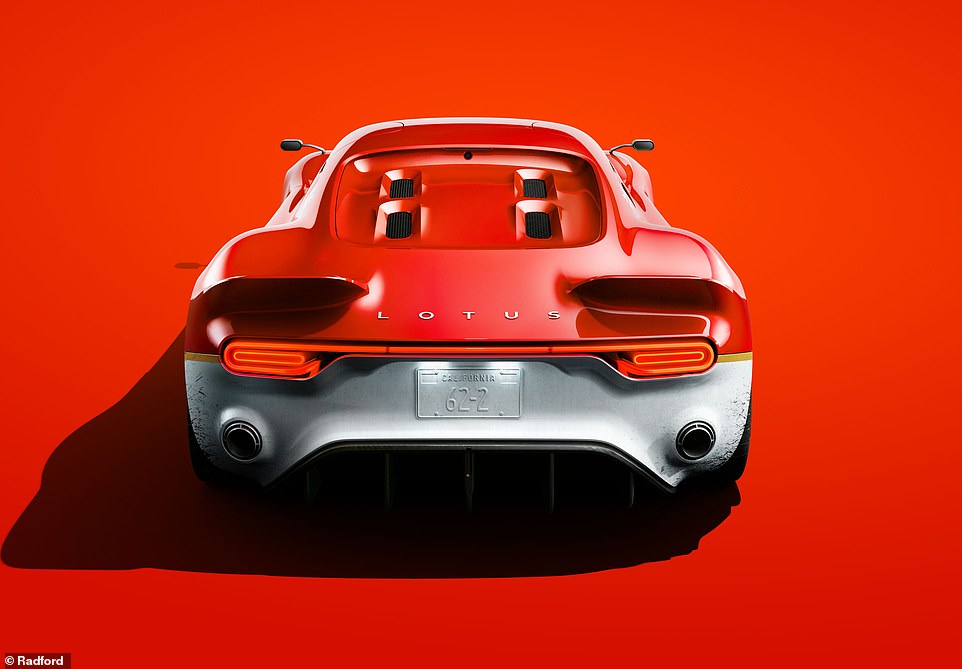 The bodywork will be almost entirely carbon composite while the cabin will also be wrapped in a carbon fibre roll-over crash to provide occupant protection in the event of an accident.

The combination of lightweight materials means the Type 62-2 should tip the scales at around 1,000kg – which is about the same as a Volkswagen Up! city car.

To improve both stiffness and how well it stick to the road in the bends, Radford will fit a bespoke – and sophisticated – tubular rear subframe that is promised to be a welded piece of art that’s visible from the back of the car.

Like you’d find on most race cars, the underside of the new Type 62-2 is completely flat.

This is designed to channel air towards the rear diffuser to generate downforce at high speeds.

As a result, the Classic version does without a spoiler at all, while the Gold Leaf and JPS will have just a pair of small ducktails at each rear quarter. However, the JPS example will have a larger rear diffuser and front splitter to generate more load into the tarmac. 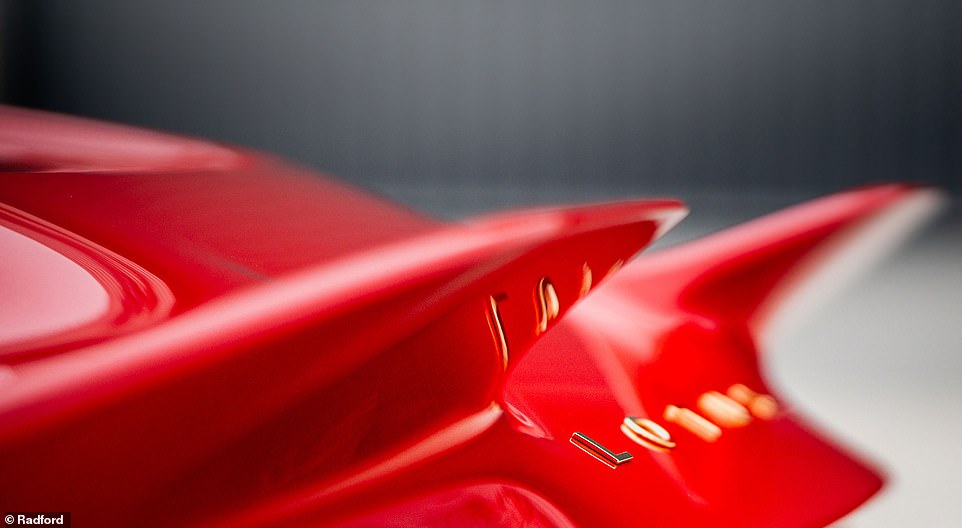 The Gold Leaf and JPS versions will both feature small ducktail tips on the rear quarters, which mimic those featured on the original Lotus car 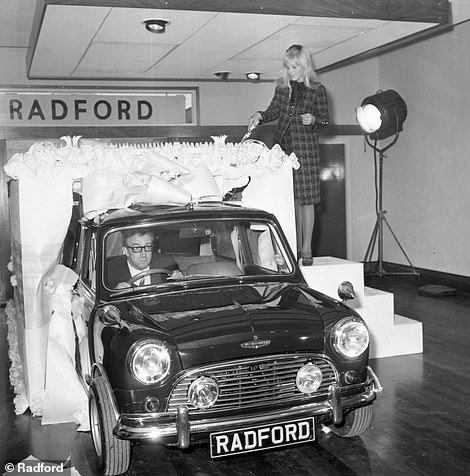 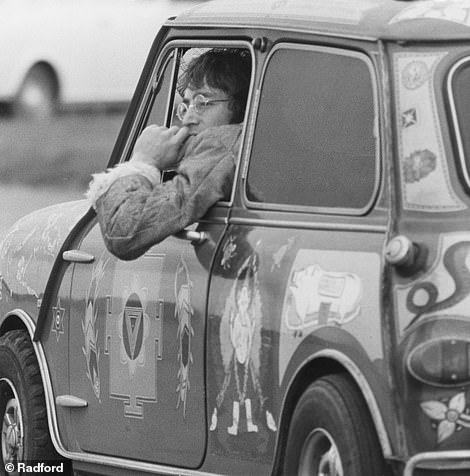 Radford is best known for coachbuilt cars, especially bespoke Minis in the 1960s. Left: Britt Ekland received a one-off Radford Mini from her husband Peter Sellers for her birthday in 1965. Right: John Lennon pictured in his bespoke Radford Mini

Commenting on the project, Jenson Button explained: ‘Creating a car that is simultaneously luxurious and comfortable, and great to drive, is a tough challenge, but the first Radford of the modern era delivers.

‘Type 62-2 is a driver’s car at its heart – when you see the design, it looks just like a 70s Le Mans car. And when you sit behind the steering wheel and look through the curved windscreen, you can see the front wheel arches – something you just don’t experience on road cars today.

‘With such a low centre of gravity, the car’s body doesn’t roll. The chassis exhibits all the hallmarks of a beautifully set up race car for the road – gifting the driver supreme confidence to extract maximum enjoyment every journey.’

Radford’s design will remain true to the original Lotus’s compact dimensions and will stand just 1,133mm tall – that’s only fractionally higher than an original Ford GT40 and makes the Type 62-2 one of the shortest models on the market.

Stood alongside the car on which it’s based, you might struggle to tell them apart at first glance – that includes the like-for-like doors, which will cut into the roof panel like a sixties endurance racer.

While this is a great period feature, it could cause problematic for taller drivers to get in and out. Jeremy Clarkson famously bought a modern-era GT40 in 2005 and struggled not only to get in but also to close the doors due to the lack of headroom. 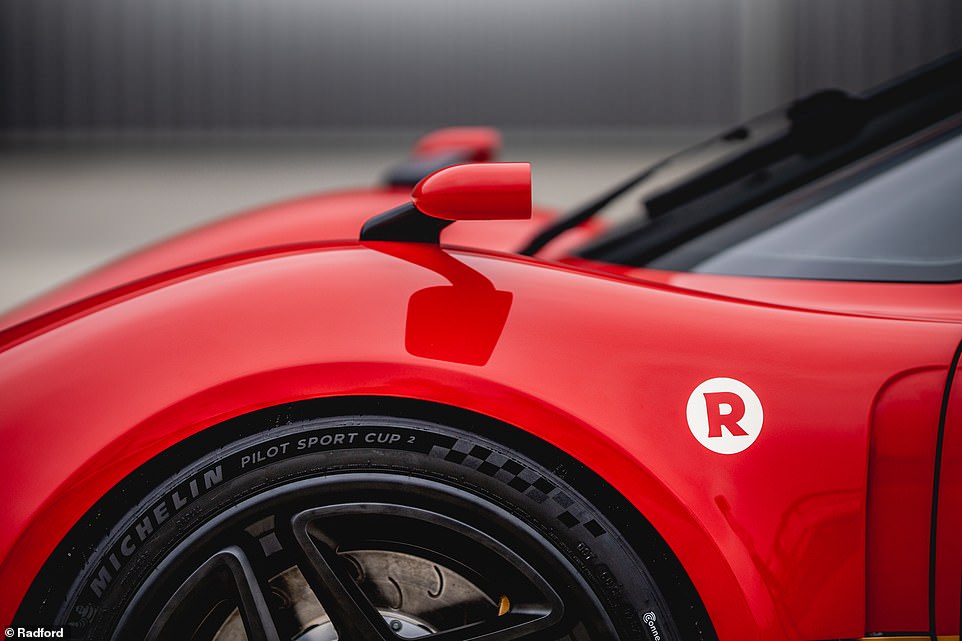 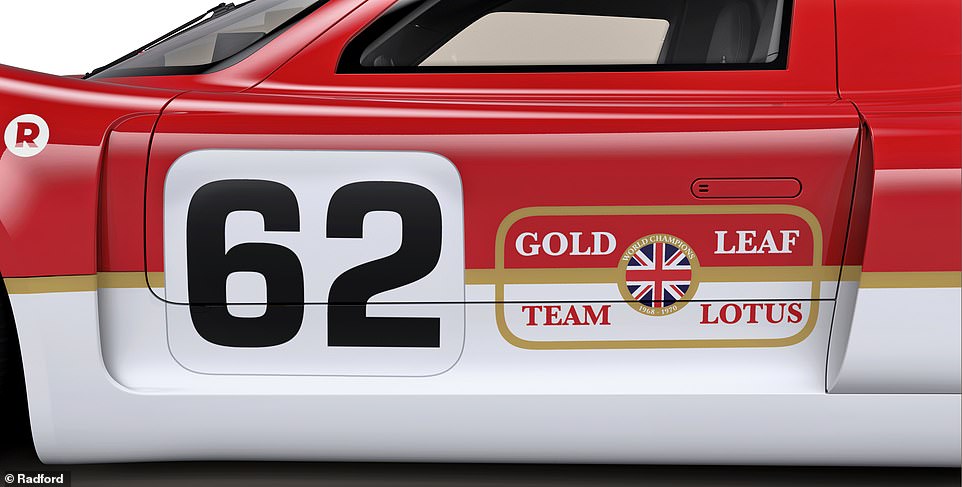 The Type 62-2 will stand just 1,133mm tall, making it one of the lowest cars to enter the market in recent history. The two doors will also have sections that cut into the roof panel, just like a sixties endurance racer 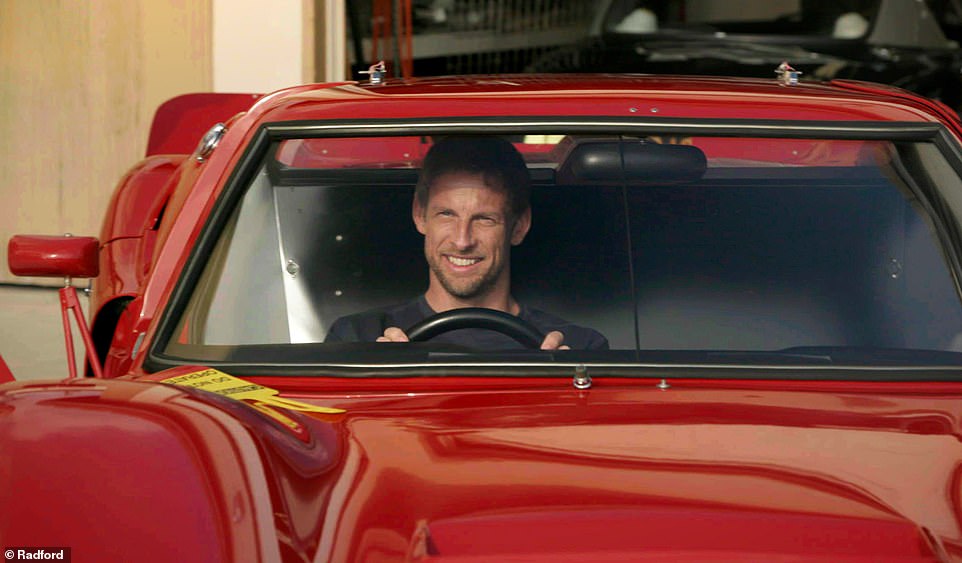 Modern upgrades include LED headlights – which have been designed to look like the original lamps – and a connecting LED bar between the two brake light clusters.

It also gets wing mirrors that are similar in shape to those on the original car but feature cameras mounted inside their housings that relay live images to the driver via small screens on each A-pillar so they can see what’s going on around them.

For those customers intending to take their Lotus remake back to the track, there’s a built in data logger and configurable displays the simplify the digital instrument cluster to show speed, gear selection and lap times for when they’re hurtling around a circuit. 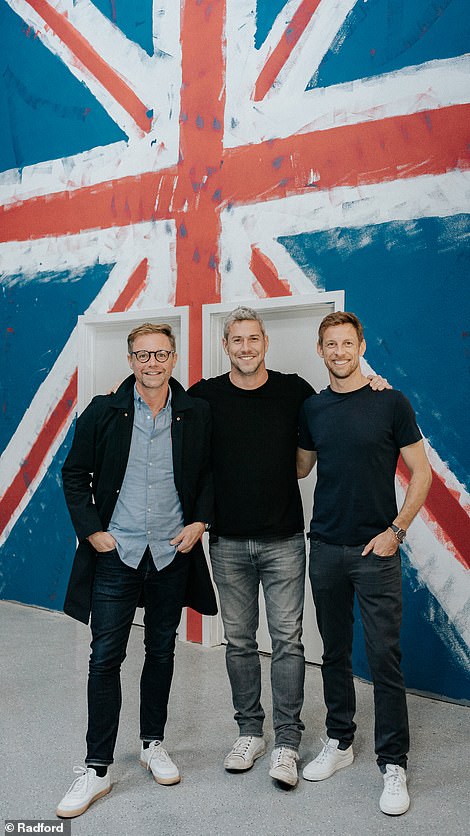 Each version will also be sold with an optional power nose lift system, which raised the front of the car so it can clear speed bumps and difficult angles for car parks and sloped driveways.

Customers will also get the opportunity to increase the bespoke purchase price with the addition of matching custom luggage from Mason and Sons, which slots under the front clamshell.

The returning car brand says buyers will work closely with its design team to select every element of their bespoke vehicle, from the upholstery finishes, paint colours and aero features on the bodywork.

It’s for this reason it says it can’t make the price of the cars publicly known.

Stubbs said: ‘Coachbuilding in the modern era utterly liberates an automotive designer. Advances in technology have ushered in a new era of this historic craft, making it possible to achieve levels of quality and design never before possible and deliver them in an extremely short time.

‘This enables us to evoke the spirit of an iconic car with stunning authenticity and offer owners the ultimate in customisation. However, while Type 62-2 elicits the original Type 62 Lotus hallmarks, it sets its own path as a Radford model – it’s all about creating a feeling of driving something timeless. Something that doesn’t look or feel like anything else on the road.’

Production of the Radford Type 62-2 begins in late 2021, with first deliveries being made in the first quarter of 2022.

Anstead added: ‘Only 62 Radford Type 62 models will ever be built. No two will be exactly alike, and each will be an exceptionally rare sight on the world’s roads.’