Dramatic weight loss through strict low-calorie diets can be more effective at keeping weight off than other types of weight control, a study found.

Oxford University researchers found those who ate no more than 810 calories a day through soups, shakes and bars had lost more than three times as much as other dieters a year later.

Dieters lost on average 1st 9lb (10.7kg), just over a stone more than other dieters who had followed an eating plan recommended by their GP. They also showed greater reductions in their risk of developing heart disease, stroke and diabetes.

The findings appear to contradict previous suggestions that people who lose weight quickly are prone to piling it back on.

Researchers found those who ate no more than 810 calories a day through soups, shakes and bars had lost more than three times as much as other dieters a year later

The study comes after NHS England unveiled radical plans to use ‘soup and shake’ diets to treat diabetes, as reported in the Mail earlier this month.

The latest trial involved 278 adults in Oxfordshire with a BMI over 30, making them clinically obese. Participants were either offered a referral to a low-energy total diet replacement programme for 24 weeks or enrolled into their GP practice’s weight management programme, which included advice and support from a nurse. Those on the diet replacement programme were asked to reduce their intake to 810 calories a day by switching all food with specially formulated soups, shakes and bars in addition to milk, water and fibre supplements.

Diet replacement products were offered for eight weeks, followed by a re-introduction of conventional food over a further four weeks. From 12 to 24 weeks, they were encouraged to continue to use one product a day to replace a usual meal.

They were also invited to attend regular meetings with a trained counsellor to develop techniques to help them follow the diet and later maintain their weight loss. 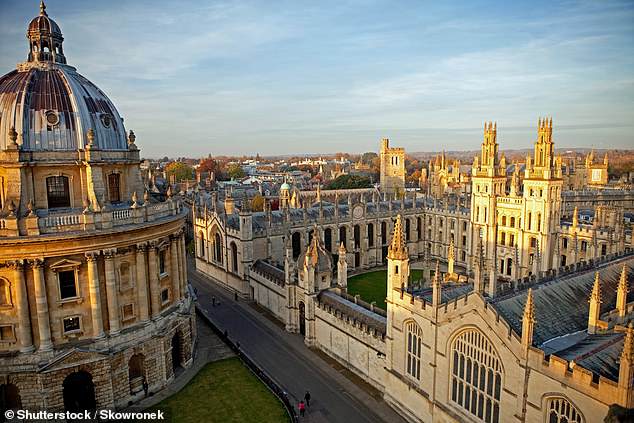 The research was carried out at the University of Oxford (pictured). Dr Nerys Astbury, senior researcher in diet and obesity at the university, said the programme could be scaled up across the NHS

Paul Aveyard, a GP and professor of Behavioural Medicine at the University of Oxford, said: ‘This study shows that GP referral to a total diet replacement programme … is an effective intervention which GPs can confidently recommend, knowing that it leads to sustainable weight loss and lowers the risk of heart disease and diabetes.’

However, they may not be appropriate for those who suffer from certain medical conditions or are taking particular medications.

Dr Nerys Astbury, senior researcher in diet and obesity at the University of Oxford, added: ‘This model of care … offers the potential for rapid roll-out at scale across the NHS and could help reduce the pressure on GPs in treating obesity-related disease.’

Dr Barbara McGowan, lead for medical obesity services at Guy’s and St Thomas’ Hospital, said the programme ‘has the potential to be scaled up across the NHS if found to be cost-effective as a treatment for obesity’.