Furious Radio 2 listeners are calling for Jo Whiley to be axed from the previously all-male drivetime show, a decision which was hailed as a victory for gender equality.

Ms Whiley joined the line-up just two weeks ago but now more than 5,000 people have signed two different petitions calling for her removal, claiming she has no chemistry with her co-host Simon Mayo.

The petitions call for a return to the old drivetime format, which the 59-year-old has hosted since 2010, reports the Times.

One disappointed listener wrote: ‘Listeners have “Gone with it” for a week. Listeners do not like. Listeners want drivetime back. 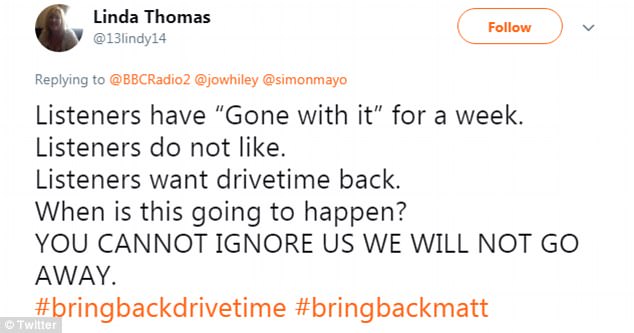 One individual said ‘you cannot ignore us, we will not go away’ over the change

Another said: ‘This doesn’t do it for me and I’ve given it enough of a chance – I’m off to find something entertaining’

‘When is this going to happen? YOU CANNOT IGNORE US WE WILL NOT GO AWAY.’

Another wrote: ‘I’ve tried, but I can’t listen to @BBCRadio2 anymore. Have loved Simon Mayo on the radio since teenage years but the new partnership has no chemistry.

‘Fun show is now so dry and strained. Such a shame they changed it.’

Insiders on the show told the Times that both Mr Mayo and Ms Whiley had concerns about the new format before it began.

A spokesperson for the BBC said: ‘We made an editorial decision to pair up two of our much-loved presenters in an exciting partnership. We were delighted that Jo and Simon responded positively, having known each other for 25 years.

‘We’re aware that Radio 2 has a very special relationship with its audience and we acknowledge some regular listeners are unhappy with the changes.’

The announcement that Ms Whiley would join the show happened in January, shortly after Carrie Gracie resigned from her role as China editor, claiming she was being paid less than other male foreign editors.

Some have slammed the decision to have Ms Whiley joined the show as pandering to political correctness.

One listener wrote: ‘Enjoyed listening to Simon Mayo and Jo Whiley’s old shows. But putting them together is a boring car crash.

‘This is what happens when political correctness gets in the way of common sense.’

Radio 2 previously confirmed that Ms Whiley and Mr Mayo would be paid the same amount for co-hosting the show.

One listener said: ‘Wrong slow for Jo Whiley, sorry but she’s boring. If it ain’t broke…’ 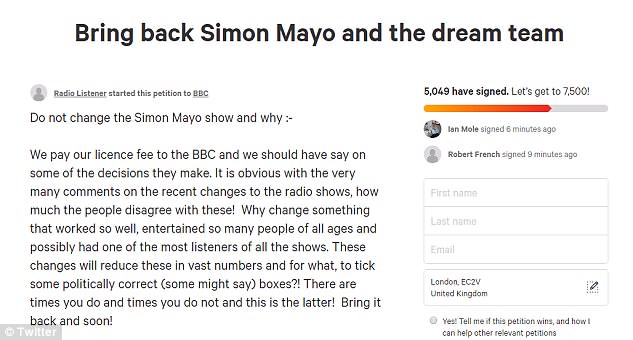 More than 5,000 people have signed a petition, pictured, calling for a return to the old format. The petition blasts the decision for ‘tick[ing] some politically correct (some might say) boxes?’