The BBC said she died peacefully in Southampton General Hospital on Wednesday evening, with her husband and daughter present.

There has been an outpouring of grief over her death, having only revealed she was terminally ill a week ago.

Her family said in a statement: ‘Ruth died peacefully in Southampton General Hospital on Wednesday evening with her husband and daughter present’.

While Lewis Carnie, Head of Radio 2 said: ‘Reverend Ruth Scott was much loved amongst the Radio 2 family. Working with both Sir Terry Wogan and Chris Evans, her Pause for Thought reflections were enjoyed by millions of listeners to the Radio 2 Breakfast Show over the years. Our thoughts are with Ruth’s family at this sad time’. 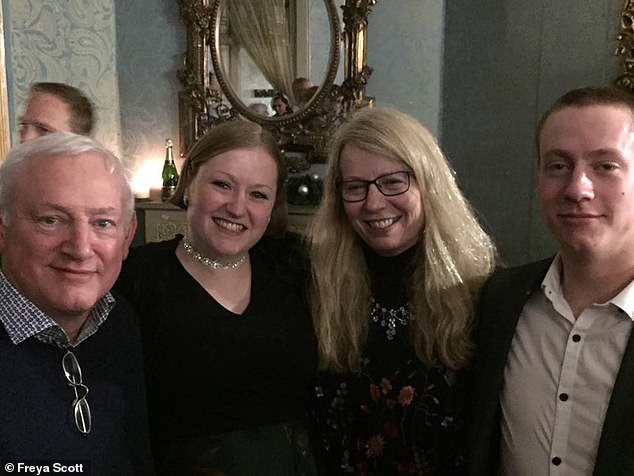 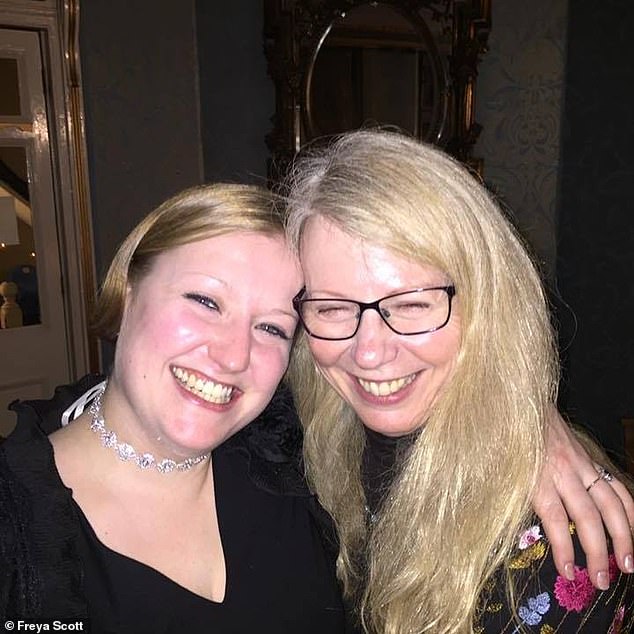 Broadcaster Reverend Ruth Scott pictured with her daughter Freya, 30. Reverend Ruth told Chris Evans she was ‘in the middle of saying goodbyes with the family’

Reverend Scott calmed the nerves of listeners in her frequent Pause for Thought broadcasts on the Radio 2 Breakfast Show.

The 60-year-old’s final broadcast left listeners in floods of tears when she revealed from her hospital bed that she has just weeks to live after battling cancer for two years.

Reverend Ruth was interviewed on Virgin Radio at Southampton General Hospital by close friend Chris Evans, who she worked with for almost a decade at his previous station Radio 2.

She was joined by her husband of 37 years, Chris, and talked about leaving behind her two children, Freya, 30 and Tian, 23.

Listeners took to Twitter after hearing the interview, praising Chris for his gentle interviewing style, calling it ‘some of the best radio I’ve ever heard’.

Another described it as a ‘soul enhancing start to the day’. 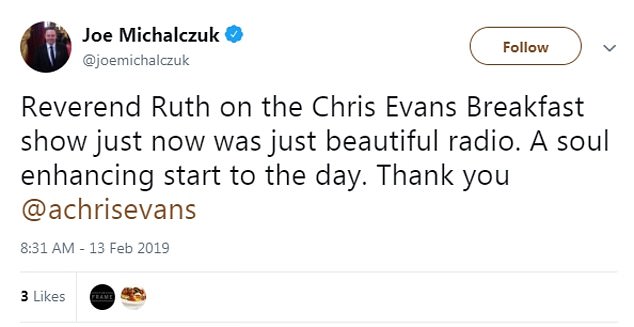 Listeners praised her bravery, calling her ‘wonderfully inspiring’ and encouraged others to listen to her honest interview with Chris

At the interview’s start, she told the Virgin host: ‘I might not be coherent.’

Reverend Ruth was diagnosed two years ago with a lymphoma and has been having treatment ever since. 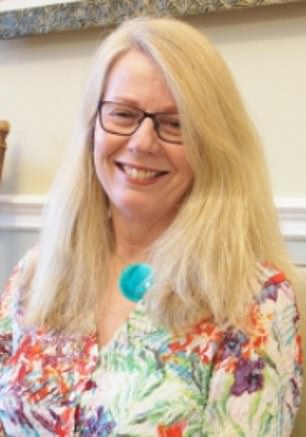 ‘I’ve got to accept the fact that I am dying’: Ruth was praised online for her honesty and bravery, with many listeners calling her an inspiration

The mother-of-two said she had been hoping to have a donor stem cell treatment.

However, she was told at the start of February that it was not possible, and that she had just weeks to live.

Chris mentioned her work as a missionary, a nurse and a midwife before describing her as ‘a hand to hold for thousands of people in her life’.

Reverend Ruth met her husband Chris, a vicar, while working as a student nurse at St Thomas Hospital. They married in 1982.

She bravely told the DJ: ‘I’ve got two or three weeks to live at most so we’re in the middle of saying goodbyes with the family and thinking about how it is to be separating from one another.’

She said: ‘Death feels very weird at one level, but it feels very natural at another level.

‘I’ve got to accept the fact that I’m dying. I’m not frightened. I’ve had the most fantastic life. I just wish that it had been longer.’

Reverend Ruth also mentioned a tender moment in which her son sat at her bedside and asked her if she could give him 60 years of wisdom in one day.

‘[My son] Tian keeps saying to me I love you, but it’s because I won’t be able to tell you for very much longer’. 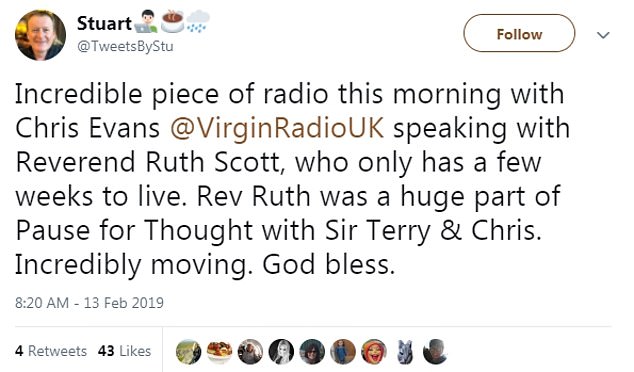 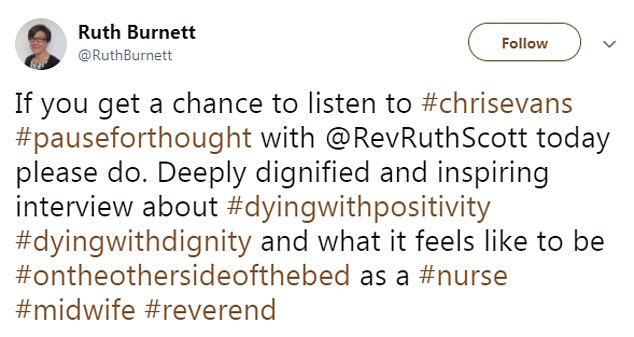 Listeners took to Twitter to share their feelings on the interview, with many saying they were in tears

Lymphoma is a cancer of the lymphatic system. In lymphoma, blood cells called lymphocytes become abnormal. These are the lymphoma cells.

Usually the body’s immune system destroys abnormal cells. But lymphoma cells are often able to avoid the immune system. This means they can keep dividing and grow out of control.

Over time, there are enough lymphoma cells to form a lump. The most common place for this to happen is in the lymph nodes. But lymphoma can start growing in other parts of the body.

Reverend Ruth said she thought she’d end up in a wicker coffin, or scattered in the Bay of Brodick and described planning a ‘celebratory’ memorial service of colour.

Chris and Reverend Ruth refused to say goodbye at the end of the 20-minute interview as they admitted ‘who knows’ what comes next.

Taking to Twitter after the show – which can be listened to in full on Chris Evans’ podcast – many listeners shared their thoughts on Ruth’s powerful interview.

Ruth has openly spoken about her cancer diagnosis before.

During a Pause for Thought show in 2018, she said: ‘Last year when I started with the cancer, uncertainty was the thing I found the hardest not knowing what the diagnosis was etc, but suddenly now I am quite happy with uncertainty. I can sit more easily with it than I did last year.’

Reverend Ruth Scott is an Anglican priest, writer and broadcaster. 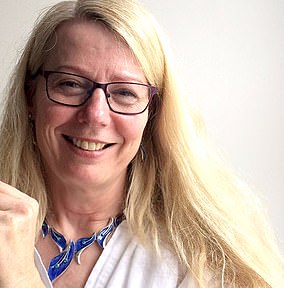 Originally from Essex, her working life began as a student nurse in St Thomas’ Hospital, London where she met her husband Chris. She went on to train as a midwife, and later became a Sister Counsellor.

After leaving nursing in 1985, she began freelancing as a journalist, writing for national nursing journals, and local broadcasting. During this time she suffered two miscarriages and began to think about ordination.

Her daughter Freya was born in 1988, a year before she started training as a priest. She became one of the first women to be ordained in the Church of England in 1994.

From there, she became involved with interfaith dialogue and broadcasting for the BBC.

To supplement her income she performed as a clown magician at children’s parties and learning fire-eating to boost her routine. Her son, Tian, was born in 1996 after three further miscarriages.

She regularly presented Pause for Thought and Good Morning Sunday on Radio 2, Prayer for the Day and The Moral Maze on Radio 4 as well as programmes on the World Service.