Kirsty Young has revealed she is leaving Desert Island Discs on Radio 4 for a ‘number of months’ because she is suffering from fibromyalgia.

The TV and radio presenter said she was stepping back from the ‘wonderful job’ to recover.

Young, 49, will be temporarily replaced by fellow broadcaster Lauren Laverne, 40, from BBC Radio 6.

Fibromyalgia, also called fibromyalgia syndrome (FMS), is a long-term condition that causes pain all over the body.

Young said in a statement to the Press Association: ‘Casting away some of the world’s most fascinating people is a wonderful job – however, I’m having to take some time away from Desert Island Discs as I’m suffering from a form of fibromyalgia.

‘I wish Lauren all the very best, I know she will be great. And I very much look forward to getting back to good health and back to work.’

Laverne said: ‘It’s a huge honour to be asked to cover my favourite programme on behalf of one of my heroes.

‘As a listener first and foremost I know what a special place Desert Island Discs holds in the hearts of the British public.

‘So much of that is down to the warmth, wit and peerless skill of Kirsty Young.

‘I wish Kirsty better and will do my very best to look after Desert Island Discs until her return.’

Young said in a statement that she would be leaving the ‘wonderful job’ to recover from a form of fibromyalgia. Symptoms include chronic pain, fatigue and muscle spasms

Desert Island Discs, during which guests share the soundtrack of their lives, returns on September 16.

Laverne will host the third episode onwards, as well as continuing to present her weekday mid-morning show on BBC Radio 6 Music. 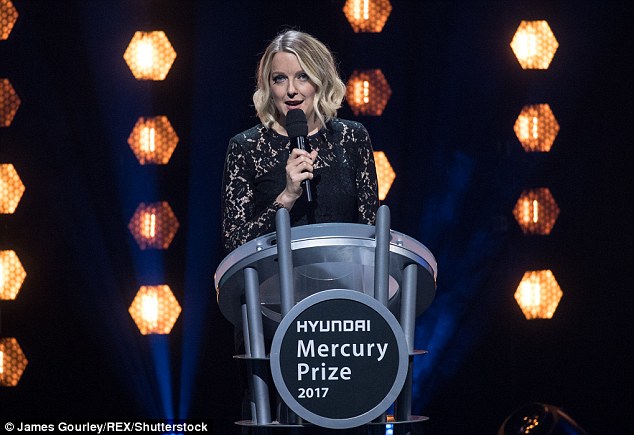 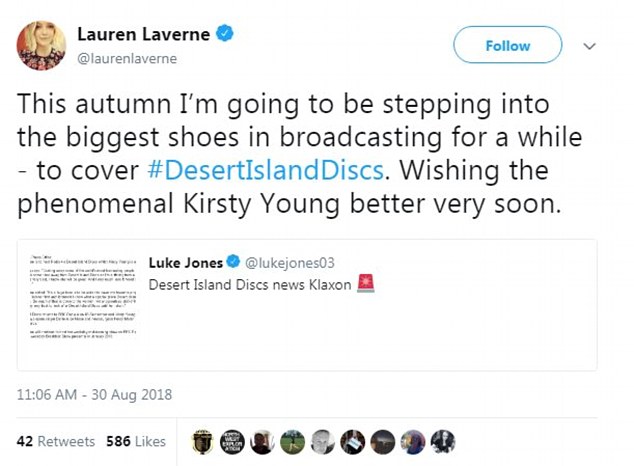 ‘Stepping into the biggest shoes in broadcasting’: Laverne told her Twitter followers about her new role

She took over from Sue Lawley as host of Desert Island Discs in 2006.

WHAT IS FIBROMYALGIA AND HOW IS IT TREATED?

Fibromyalgia is a chronic disorder that is associated with widespread pain throughout the body.

This occurs in an estimated five million people in the US, and 80 to 90 per cent of those are women.

Researchers have looked into fibromyalgia developing due to an issue with how the brain responds to pain receptors.

Treatment is used to minimize the symptoms, not to rid the body of the disorder.

There is a variety of medications to help treat pain, sleep problems and muscle spasms.

People can also turn to therapy, messages, acupuncture and yoga to see if it helps lessen the symptoms.

There is no current cure for the chronic disorder.