Sydney broadcaster Alan Jones has announced he will retire from radio at the end of the month, after 35 years on the airwaves.

Jones, 79, made the shock announcement to his 2GB listeners on Tuesday morning, telling them he had been told by doctors it was becoming detrimental to his health.

He will be replaced on the breakfast shift by Ben Fordham, who is currently the drive host on 2GB.

‘I have listened to the experts and I am taking this opportunity to indicate to my radio family that I will be retiring from radio at the end of this month,’ Jones said.

‘We are living in the world of coronavirus. The most repeated statement we hear is “we must listen to the experts”, well, the experts are telling me in no uncertain terms, and not for the first time I might add, “continuing with the present workload is seriously detrimental to your health”.

Alan Jones on his retirement

‘I have taken on extra load in television and print media but if I am to be serious about reducing the workload and listen to the experts then I’ve decided that the bulk of my workload is dominated by radio.

‘I guess after 35 years the full stop has to go in somewhere.

‘I have listened to the experts and I am taking this opportunity to indicate to my radio family that I will be retiring from radio at the end of this month.

‘I am not retiring, I am just retiring from radio.’

Jones told listeners that he will still be writing columns in The Australian and making regular appearances on Sky News.

When the phone lines were opened just minutes after his announcement, ex-Prime Minister Tony Abbott, NSW premier Gladys Berejiklian and former shock jock John Laws were among the first to congratulate him.

‘It is. You’re to blame for this! You keep running around and saying we must listen to the experts,’ Jones joked in response.

Over more than three decades in broadcasting, Jones became the most influential man in Australian politics.

Jones started his radio career with 2UE in 1985, taking over the morning show role which had been vacated by renowned shock jock John Laws, who moved to 2GB.

But when Laws returned to 2UE in 1988, Jones was switched to the breakfast slot, a move that saw his popularity skyrocket. 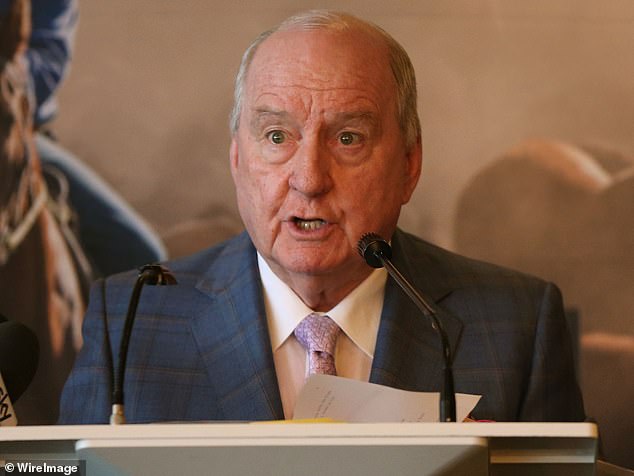 Jones started his radio career with 2UE in 1985, before moving across to rival station 2GB in 2002 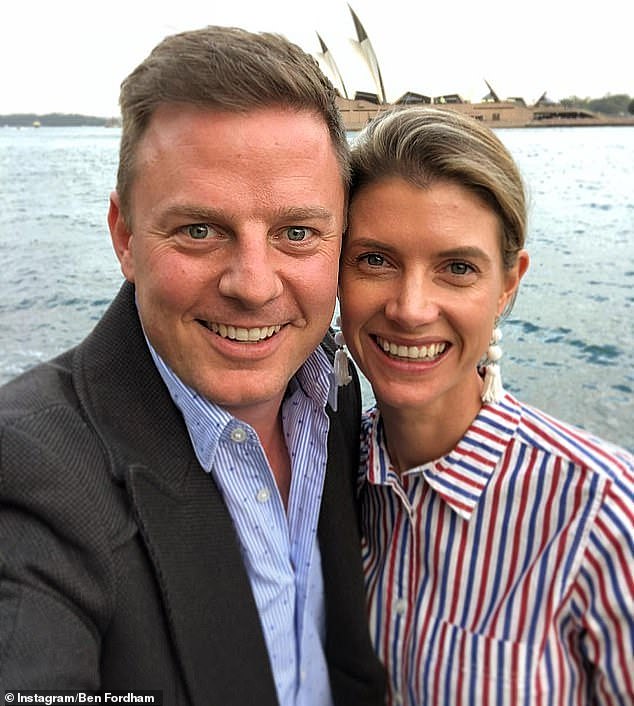 Jones will be replaced on the breakfast shift by Ben Fordham (pictured with wife Jodie), who is currently 2GB’s drive host

He switched to 2GB in 2002 after persuasion from Macquarie Radio owner John Singleton, taking his new employer to the top of the ratings.

Jones had previously been a speech writer for Liberal prime minister Malcolm Fraser and in 1977 ran unsuccessfully as a Liberal by-election candidate in the state seat of Earlwood in Sydney’s south, famously wearing Greek costume in a doomed bid to enter politics.

He had to famously apologise in 2012 for saying then Labor PM Julia Gillard’s father John had ‘died of shame’ to a Young Liberals function.

The broadcaster had called for Australia’s first female PM to be ‘put in a chaff bag’ and thrown in the ocean.

Before being a political adviser and broadcaster, Jones taught English at the Kings School at North Parramatta.

Future deputy prime minister and Nationals leader John Anderson was one of his students.