The Typhoons, which have a top speed of up to 1,500mph, left their base at Lossiemouth near Inverness at around 11.05am.

They screamed up to the Shetland Islands as Russian bombers passed through the Norwegian Sea and over the top of Scotland.

A RAF refuelling jet was also diverted towards Lossiemouth from Brize Norton as the British typhoons tracked the Russians. 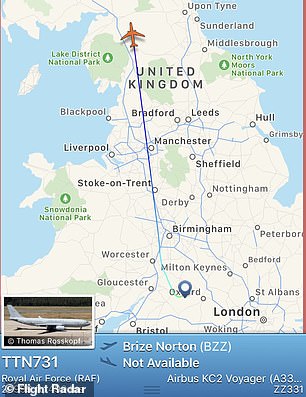 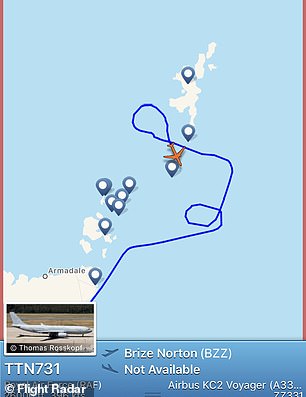 The Ministry of Defence said: ‘Typhoon fighters from RAF Lossiemouth were scrambled today as a precautionary measure against a potential incursion into UK area of interest by one or more unidentified aircraft. At no time was there a threat to UK airspace and the Typhoons subsequently recovered.’

Russia also confirmed its bombers were flying north of Britain, which has happened more than a dozen times this year so far.

An air force spokesman said on Facebook: ‘The duration of this will be about ten hours.

‘After the flight task, the crews will return to the home airfield. The event is held in strict conformity with the international rules for the use of air space without violating the borders of other states.’

Putin’s armed forces have been carrying out manoeuvres north of Norway as NATO members carry out exercises in the Scandinavian country.

Russia’s warships will test-fire some of Russia’s latest hardware in international waters near the Norwegian cities of Kristiansund, Molde, and Alesund from November 1 until November 3, the country’s military said.