A Battle of Britain veteran died just hours before VE Day, leaving one surviving member of ‘The Few’ who protected Britain from Nazi Germany in 1940.

Terry Clark was 101 when passed away from natural causes in a care home on Thursday evening, just as the nation was preparing to celebrate the 75th anniversary of VE Day on Friday.

It means that John ‘Paddy’ Hemingway is the only surviving member of ‘The Few’, a crew of RAF pilots who protected the UK from the Luftwaffe in the Battle of Britain in 1940. 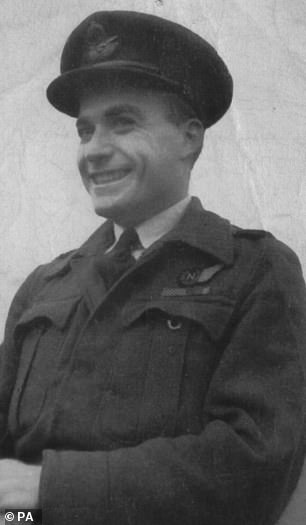 Terry Clark, who was one of only two remaining members of ‘The Few’ who defended the nation in the Battle of Britain, has died at the age of 101 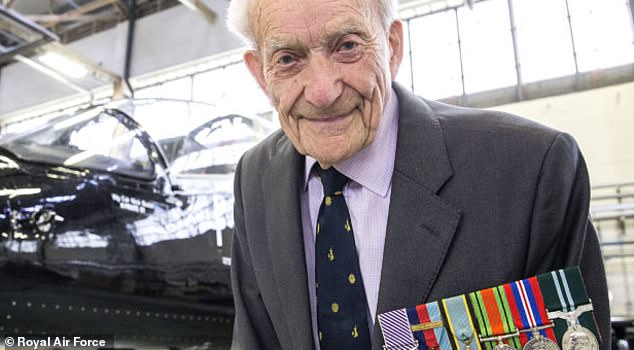 Mr Clark was responsible for protecting York and its nearby airfields during the Battle of Britain and made six kills. The pilot also protected Allied soldiers in Normandy on D-Day 1944 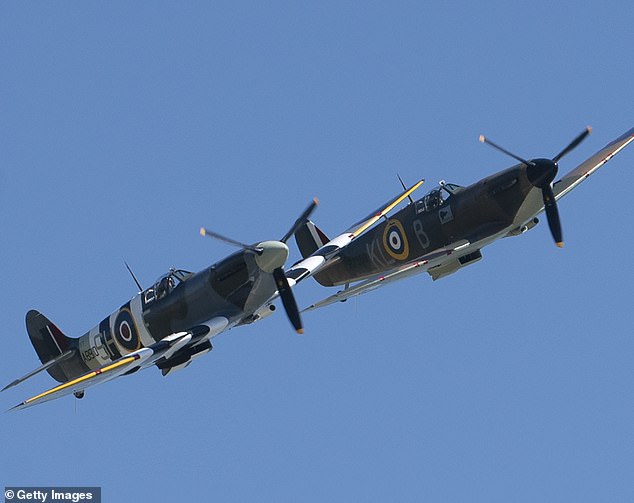 Mr Clark died from natural causes in a care home just hours before VE Day, where the nation celebrated the 75th anniversary of the end of the Second World War by flying planes across the skies of Britain (pictured)

In 1938, Mr Clark joined the Auxiliary Air Force as a 19-year-old. A year later, he was called up to RAF Catterick where he operated as an air gunner and a radio operator on the Bleinheim and Beaufighter aircrafts respectively.

He then joined Bleinhem fighter unit No. 219 Squadron in July 1940 as an Aircraftman Second Class, protecting York and its nearby airfields during the Battle of Britain, and was responsible for six kills.

He was awarded with the Distinguished Flying Medal in July 1941 for his bravery, as well as the Battle of Britain ‘clasp’ that all 3,000 serving men during the Battle received.

They fought the most important battle this country ever faced and their victory saved Britain from the tyranny of Nazi Germany.

The heroes of the Battle of Britain repelled Hitler’s Luftwaffe in the summer of 1940, although only a few of them are still alive.

At the time were in their late teens or early 20s when they took to the skies in Spitfires and Hurricanes from July to October 1940. Others flew in Blenheims, Beaufighters and Defiants, becoming the ‘aces’ of the Battle, shooting down plane after plane.

During the Battle, Sir Winston Churchill said: ‘The gratitude of every home in our island, in our empire, and indeed throughout the world, goes out to the British airmen who, undaunted by odds, unwearied in their constant challenge and mortal danger, are turning the tide of the world war by their prowess and by their devotion.

‘Never in the field of human conflict was so much owed by so many to so few.’

When it was over, 544 RAF pilots and aircrew were dead and had made the ultimate sacrifice to keep generations of Britons safe.

Also from the skies, he protected Allied troops on the Normandy beaches during D-Day 1944.

Tributes have poured in to pay tribute to Mr Clark, who himself described the Battle of Britain victory as ‘vital’ and the ‘turning point of the war’.

‘Terry belonged to a generation of servicemen and women who answered their country’s call without question.

‘We owe a debt of gratitude to every one of them and their legacy must be to remember their service.

‘John ‘Paddy’ Hemingway is now the last surviving member of The Few and in September we will mark the 80th anniversary of the end of the battle.

‘The RAF Benevolent Fund will be paying tribute to those pilots and air crew who ‘gave so much to so many’.

‘We honour their memory by supporting the Second World War and National Service veterans who need our help, before it is too late.’

Aviation artist Steve Teasdale, a Yorkshire resident and long-term friend of Mr Clark, said: ‘He was a true gentleman and a wonderful man.

‘It’s mixed emotions currently. We have got the flags and bunting out, we are here grieving and yet we are celebrating at the moment. 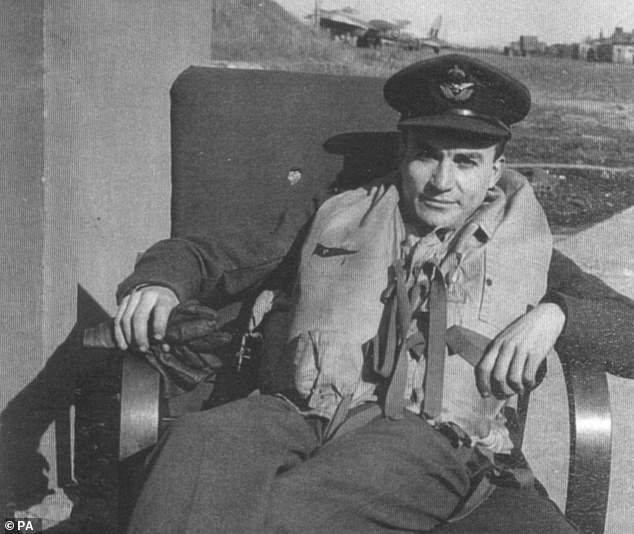 Mr Clark was one of 3,000 men who received the Battle of Britain medal for their service in what is often described as the turning point of the Second World War 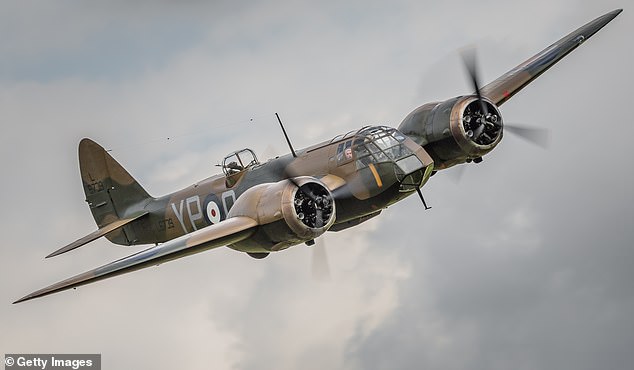 ‘It’s very difficult. All I can think about is Terry.’

Major Chris Chapman, branch secretary of the British Legion’s York branch, said: ‘It is sad to hear we have lost one of the Few, and perhaps even sadder that in the current circumstances we are not able to attend his funeral to pay our respects.

‘Our thoughts are with his family.’

The flag at the Battle of Britain memorial will be flown at half past by the RAF Association to pay tribute to Mr Clark.

The last surviving Battle of Britain pilot: How John A ‘Paddy’ Hemingway was shot down four times in the Second World War 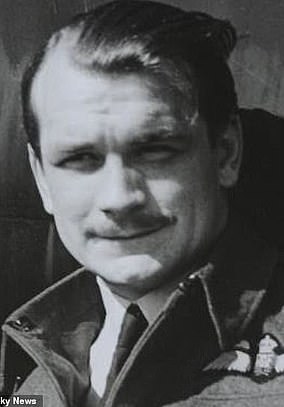 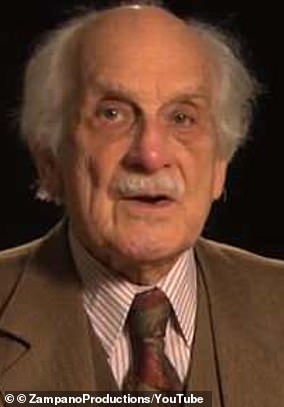 The only surviving Battle of Britain pilot John A ‘Paddy’ Hemingway, 99, who was born in Dublin, was awarded the Distinguished Flying Cross for bravery and shot down four times in the Second World War.

After joining the RAF in 1938, Mr Hemingway was posted to France to provide air support for the British ­Expeditionary Force as part of the No.85 Squadron in Croydon.

After drowning his first enemy plane in May 1940, which was a Dornier bomber, his Hurricane fighter plane was targeted and hit by anti-aircraft fire and had to make a forced landing.

And between July and October 1940, Mr Hemingway had to bail out first after intercepting a flight of German Junkers over the North Sea, where he was saved by a ship that had been passing by.

The second time saw him jump for his life after firing on German planes above the Essex coast.

After he was posted to Italy as a squadron leader, his Spitfire was hit by German ground fire in April, 1945 and he bailed out again.

The years following the war he continued to serve in the RAF before retiring as a group captain in September 1969. Other post-war RAF jobs included stints at Nato in Paris and the Air Ministry.

After the death of his wife Bridget, Mr Hemingway now lives at a nursing home on the outskirts of Dublin and is now one of the last members of ‘The Few’ who defended Britain in her darkest hour.

Last year, the Irishman hit headlines after he was wrongly thought to be missing and presumed dead based on the official roll of honour naming the airmen that are still alive.

It was only until a member of Mr Hemingway’s family got in touch with the Battle of Britain Fighter Association to point out the oversight, that their information was amended.

Speaking at the time, Mr Hemingway’s son, Brian, 66, from Guildford, Surrey told The Mirror: ‘He’s not particularly interested in the past. Like so many of his generation, he doesn’t feel as though he did anything special.

‘But he likes the idea he’s one of the last nine and he’s tickled by the fact that he’s the last known Irishman to have fought in the Battle of Britain. He’s loved and he’s not forgotten and that’s the way he likes it.’