Rafael Nadal cruises into the French Open’s last-16 with a 6-3, 6-2, 6-4 win over Holland’s Botic Van De Zandschulp… leaving the 13-times champion on a collision course with Novak Djokovic in next week’s quarter finals at Roland Garros

Rafael Nadal and Novak Djokovic remain dead set on their anticipated collision in next week’s quarter finals of the French Open.

To keep his side of the bargain Nadal must now beat Felix Auger Aliassime, and at least he knows that his next opponent will not be getting any inside information.

The Canadian is currently being coached by Toni Nadal, the most instrumental figure in the stellar career of his famous nephew, but he has long since warned his current player that he will step aside in the event that the two of them meet. 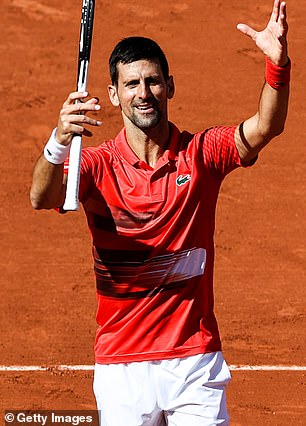 That will now come to pass in their fourth round match, after the 13-times champion – supported by Zinedine Zidane in the stands – steamrollered his way to the last sixteen, defeating Holland’s Botic Van De Zandschulp 6-3 6-2 6-4.

Auger Aliassime is completely accepting of the unusual coaching situation for his next match: ‘I don’t know if I need insight on how Rafa plays, to be honest,’ he said.

‘We had the discussion, it was black and white from the first time we started working together as we knew it was a possibility that eventually I would play Rafa when I’m working with Toni. I think Toni will watch from a neutral place and enjoy the match. 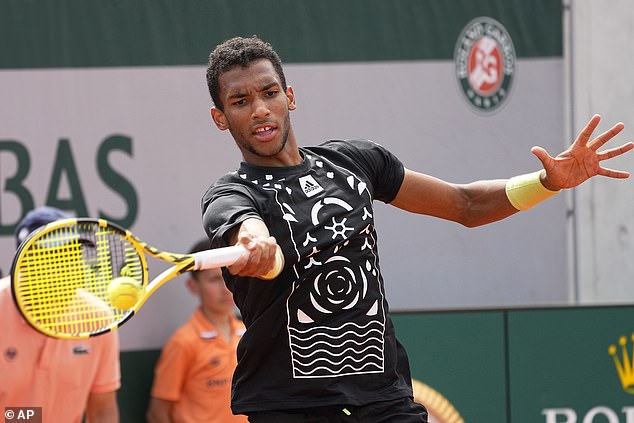 ‘I know this question is going to come quite a lot, so I just want to say that for me Rafa’s career and what he did with Toni is much bigger than the match this weekend.

‘What he did with his uncle will not take anything away from both sides and I just think we need to see it as bigger picture. It’s one match, let’s play.’ The Spaniard has completely dispelled any concerns about the long-term problem with his left foot that often leaves him in pain.

At the Italian Open fifteen days previously a downcast Nadal had limped off court following a defeat by Canada’s Denis Shapovalov with all sorts of downcast predictions about his chances at Roland Garros.

Yet the much-improved Dutchman was no match for a champion who has a history of talking down his chances ahead of Paris before coming to the boil. 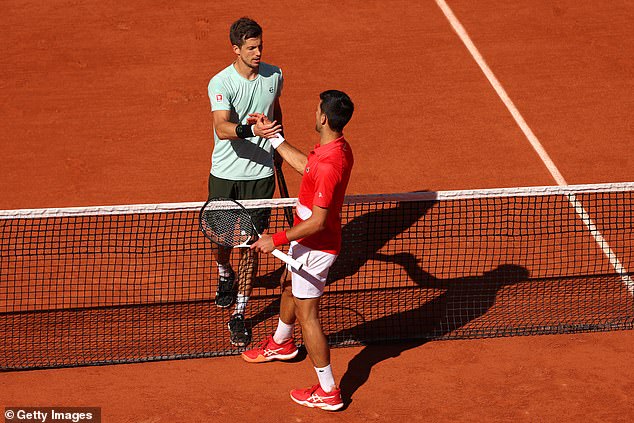 Djokovic had far too much for Slovenian Aljaz Bedene, who lost in straight sets in the third round

As experienced Nadal watchers will attest, he is often to be found ahead of Paris playing down his chances in some shape or form, before ratcheting up his level of play as the Grand Slam fortnight goes on.

If anything he has looked better here in the early rounds than in normal years, and nobody has got close to taking a set off him.

Djokovic will next meet Argentinian pocket dynamo Diego Schwartzmann, after proving way too good for Aljaz Bedene, the Slovenian who once changed his nationality to British, only to reverse it when it became clear he could not play in the Davis Cup.

For the Serb, who won 6-3 6-3 6-2, it has been a different and longer term turnaround in his fortunes. After his deportation from the Australian Open he is flying in Paris, although he will be wary of Schwartzmann, who has been highly competitive against him on clay before.