You can make an emergency switch of date from Paris in the springtime to the chilly autumn, but the outcome is just the same.

You could move the French Open to the Christmas and New Year period with snow on the ground, and Rafael Nadal would still probably win it.

This Roland Garros triumph on Sunday, his 13th, finally gave tennis its 20:20 vision. It came with added significance in that it moves Nadal up to 20 Grand Slam singles titles, equal with Roger Federer, and fights off the challenge of Novak Djokovic for another day. 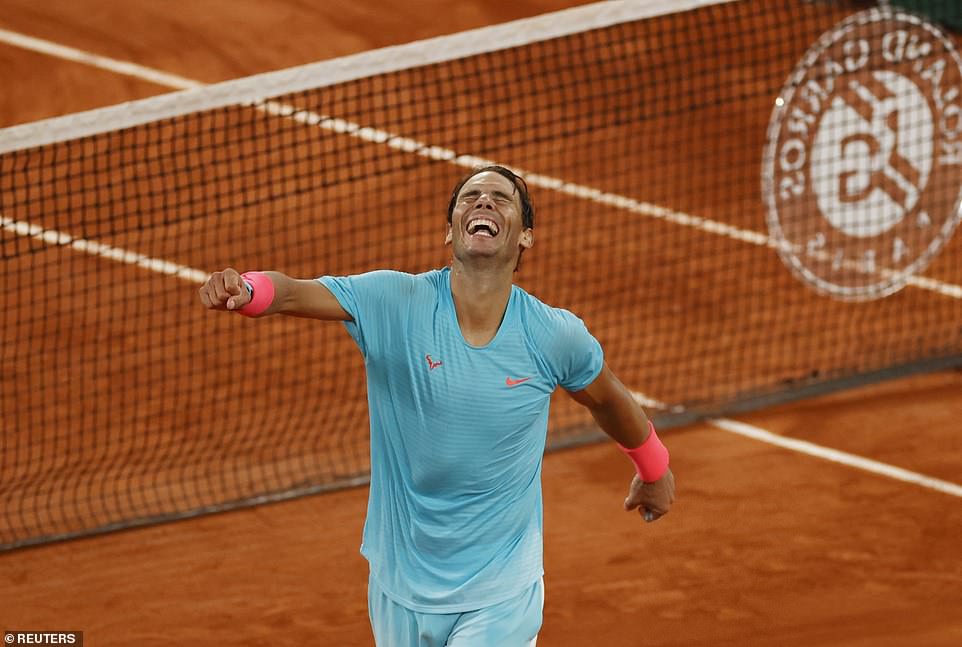 The Spanish star powered his way to his 13th French Open title in emphatic fashion, sweeping aside the Serb in straight sets

As witnessed so often with the 34-year-old Spaniard, the bigger the occasion the better he plays, and he demolished the world No 1 6-0, 6-2, 7-5 in two hours and 41 minutes to assert his familiar superiority on clay.

He was especially brilliant in the first two sets against a player who had not lost a completed match this year.

Remarkably this was only Nadal’s 10th competitive outing since February, and still he could bring himself to the boil.

Back in Switzerland, Federer —who will return in January — was suitably impressed. ‘I have always had the utmost respect for my friend Rafa as a person and as a champion,’ he said.

‘As my greatest rival over many years, I believe we have pushed each other to become better players. Therefore, it is a true honour for me to congratulate him on his 20th Grand Slam victory.’

There might be a note of resignation when he next posts a similar message. 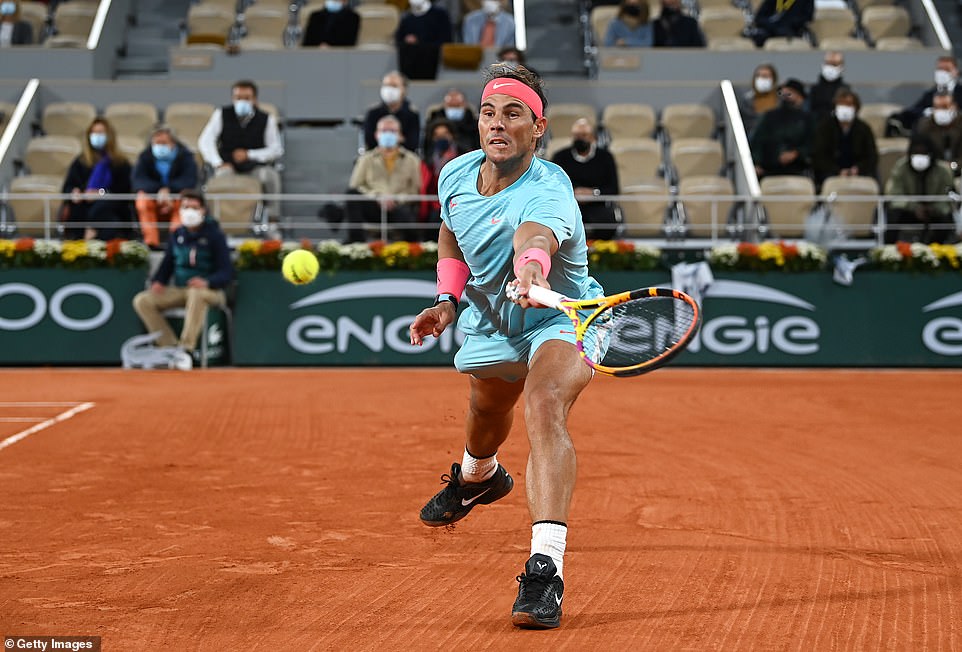 Nadal was relentless in keeping the ball in play, chasing down everything Djokovic had to offer to storm to a two-set lead 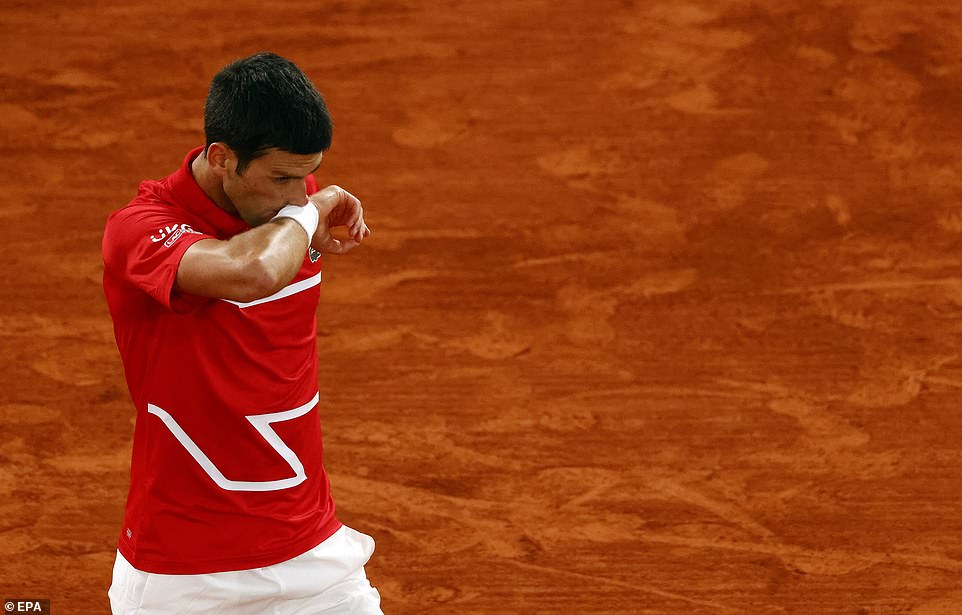 Interestingly, Federer and Djokovic have both described Nadal as their greatest rival in the past week, which makes a telling contribution to the debate over who will end up being regarded as the best of all time.

That is inarguable on clay, which makes up the lion’s share of an extraordinary record of having won one in every three majors that he has entered in his career, a better ratio than the others. And in only 224 days’ time he is due back at Roland Garros at a theoretically more favourable time of year, where he will be expected to add to his total.

An argument against Nadal’s claims is that one place has provided him with so much success, and he has a 98-2 record at Roland Garros. The man himself is somewhat allergic to discussing the overarching race with his rivals. ‘In terms of the records, of course I care,’ he said, before reasoning: ‘You can’t be always unhappy because your neighbours have a bigger house than you or a bigger boat or have a better phone.

‘Let’s see what’s going on when we finish our careers.’ Notably he also declined to commit to playing the ATP Finals at London’s O2 Arena next month, saying that he had yet to decide what schedule to embark on for the rest of the season. 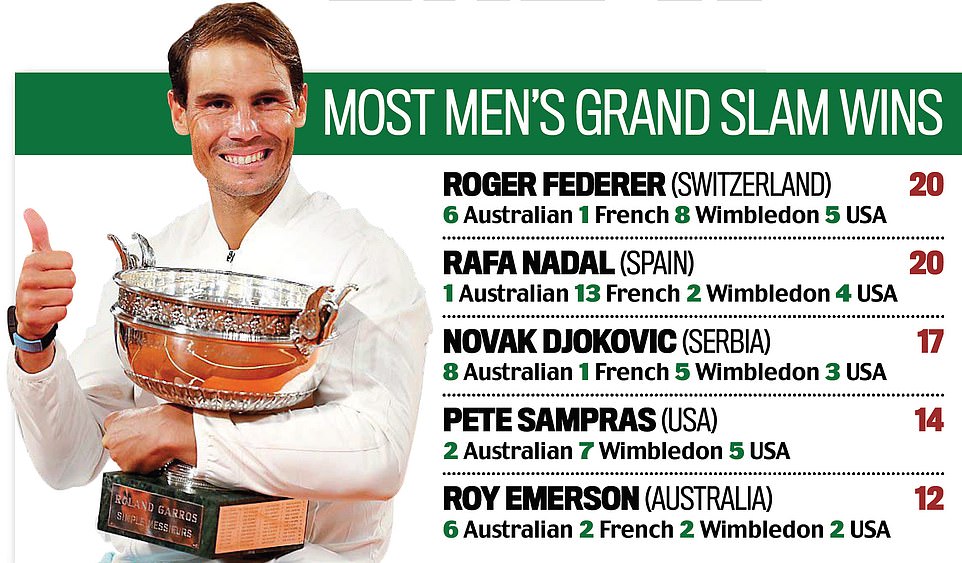 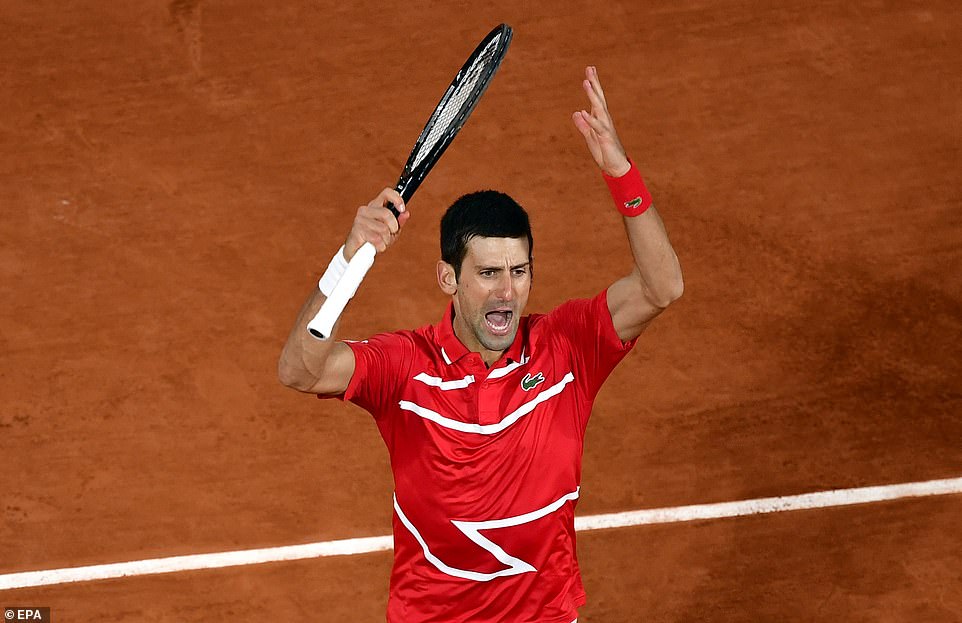 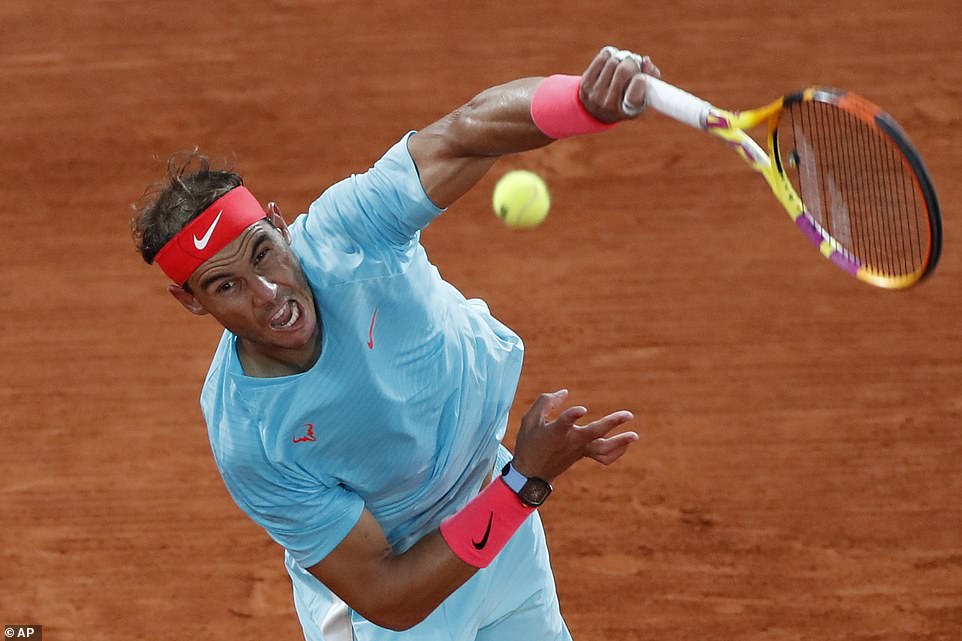 But Nadal was in no mood to let his lead slip as the Spaniard powered home, winning 7-5 in the third to seal an historic victory

If he has any weakness it is playing indoors, and he has never won the season finale for the top eight players.

On Sunday, due to early-afternoon rain, they closed the roof over his favourite court, which was supposed to deaden the bounce further and help Djokovic.

The answer came quickly to that proposition. It was not long before the match was starting to look like the 2008 final, when he allowed Federer only four games in all.Djokovic said that he had entered the final in an optimistic frame of mind, only to be subdued.

‘I was also thinking that these conditions are more favourable to me. I was feeling great throughout the tournament. He did surprise me with the way he was playing, the quality he was producing. He played a perfect match, especially in the first two sets,’ he said.

In the very first game, Djokovic attempted four drop shots, the manoeuvre that had been so effective for him in previous rounds. Nadal is, however, a different level of player. He gobbled up any that were remotely miscued, some by virtue of deft flicks across the court that scraped the lines in a display of the Spaniard’s incredible hand-eye coordination. 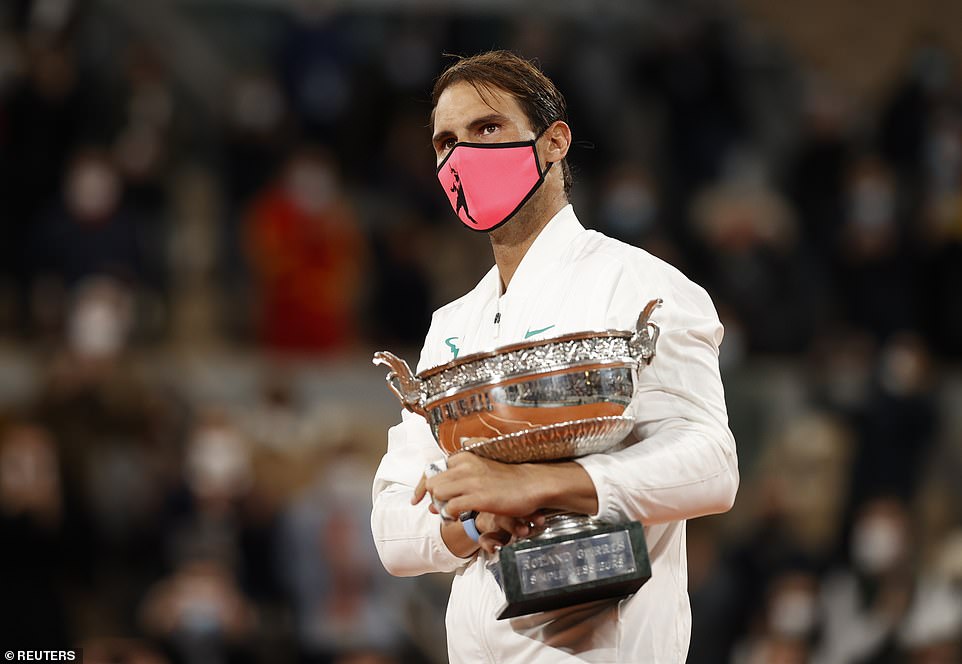 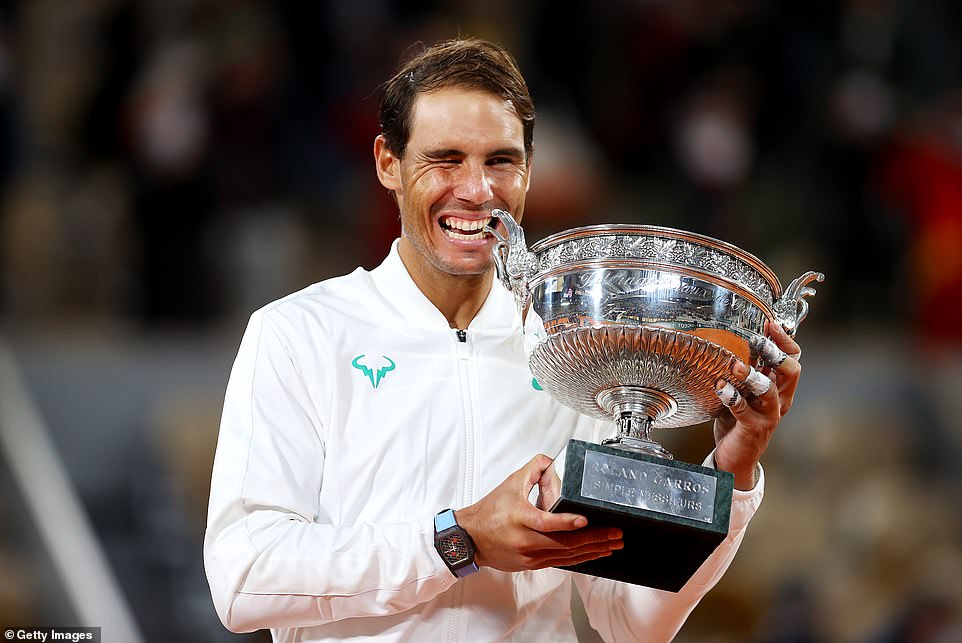 ‘It didn’t work great today, let’s say. He was winning a lot of those points,’ conceded the 33-year-old Serb. ‘I didn’t play so many at the end of the day. I did try tactically different things, but not much worked in the first two sets.

‘I wanted to disrupt his rhythm, but he was ready.’

Nadal was speaking the truth when he pointed out: ‘It’s impossible to have this score against him without playing great.’

The opener was the highest quality 6-0 set in history and took 45 minutes to complete. There were 55 minutes on the clock when Djokovic got off the mark, but the second was much the same.

He got closer in the third and broke back for 3-3, but the decisive game was at 5-5 when he double-faulted to hand the lead back. The denouement, slightly feeble at the very end, was uncharacteristic of Djokovic. The way Nadal closed it out was contrastingly typical of this extraordinary athlete. 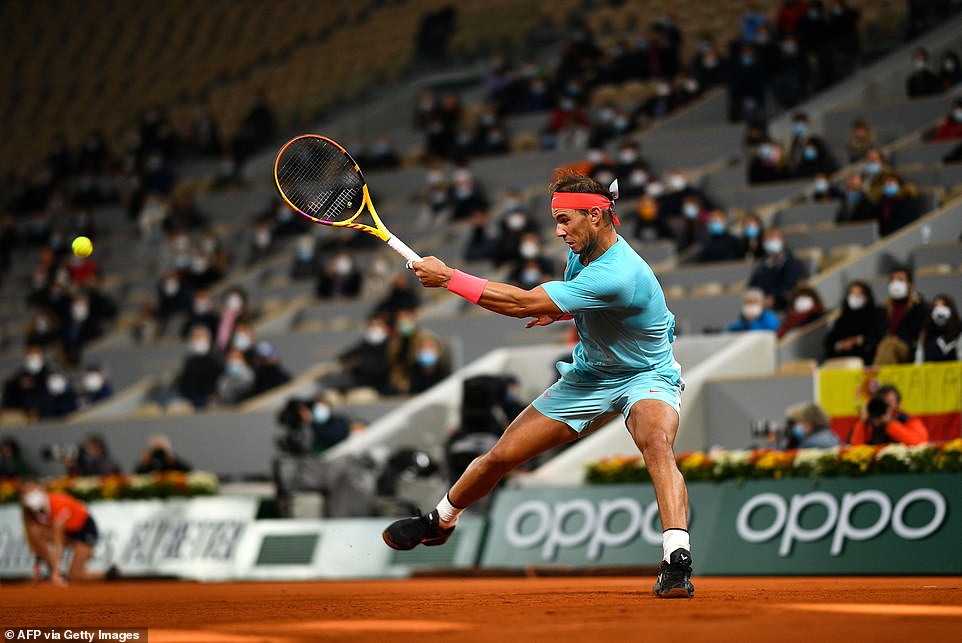 Re-live all the action as it happened in Paris right here with Sportsmail’s KIERAN JACKSON and OLLIE LEWIS.