A raffle to win a Brixton home has seen the deadline extended again – as well a reduction in the number of tickets needed to be sold for it to be given away.

Start-up Raffle House has extended the competition, this time to finish on 30 June 2019, despite launching over a year ago in April 2018.

It was initially expected to end in June 2018 before being extended to November last year, due to the lack of tickets being sold, before now being prolonged for a third time.

It wouldn’t confirm to This is Money how many tickets have been sold – while it is also offering extra tickets to those who snap up more.

The estate agents that sold the Raffle House property to its current owner have recently sold a one bedroom flat on the same road for £485,000.

The properties are very similar as both have one bedroom, one bathroom, a combined kitchen/dining area and outside spaces.

According to a local agent, since the Raffle House flat was sold to the owner, prices have dropped thanks to politically uncertainty.

This suggests the current value of the flat is likely to be lower than the given third party valuation of £650,000.

It said one of the main reasons the threshold hadn’t been met thanks to the rise in ‘amateurs’ raffling homes.

However, as the deadline has previously been extended due to insufficient ticket sales, it is safe to assume the firm have still not received nearly enough to raffle off the home.

This first flat being raffled is in SW2. It is said to have a monthly rental value of £1,900.

Not only will the winner receive the property, they will also get  legal fees up to £1,500 paid for as well as a cash lump-sum of £3,000 to cover ground rent, council tax and utilities for a year.

The ticket reduction follows on from a rise in the recent trend of raffling off homes rather than selling them through more traditional methods, either because they are struggling to get rid of their property or are simply looking to sell it in a more unique way. 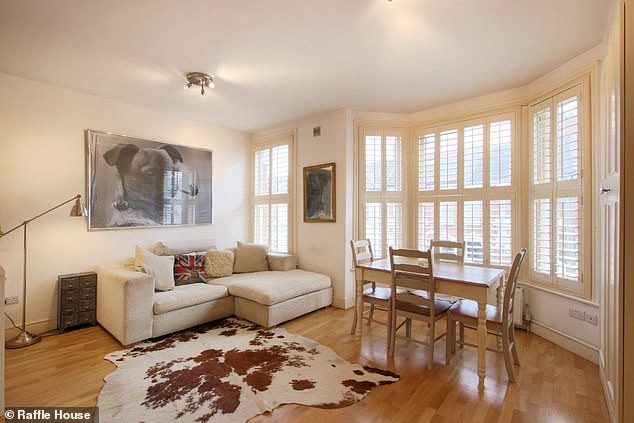 Raffle: The flat, worth £650k, comes with one bedroom, one bathroom as well as a balcony

While this is no doubt an innovative way to get rid of a property, it comes with its own hurdles – the main one being sellers not earning enough money through the raffles to actually part with the home.

Instead companies are offering much smaller cash prizes as an alternative which many feel is unfair and for those who entered the competition, not what they signed up for.

Raffle House has said it is looking to distinguish itself from other similar companies by holding regular property raffles and actually deliver the property that is originally promised, rather than monetary alternatives.

The company claimed part of the reason it was set up was due to the prospect of owning a house being so unattainable for so many people.

The firm was launched in 2018 by a team of entrepreneurs, including Benno Spencer, who ran a crowdfunding campaign to ensure they are able to run a viable business in the long term. 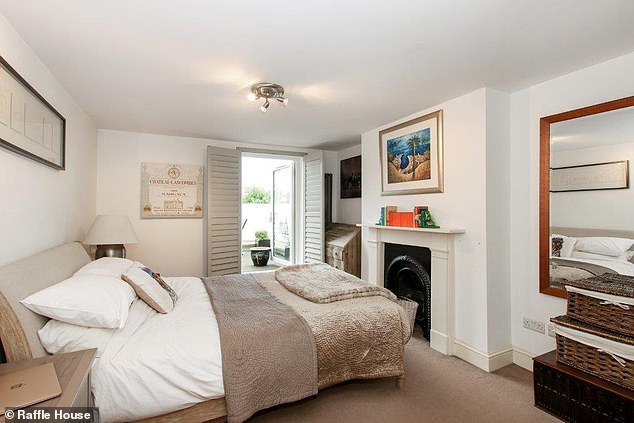 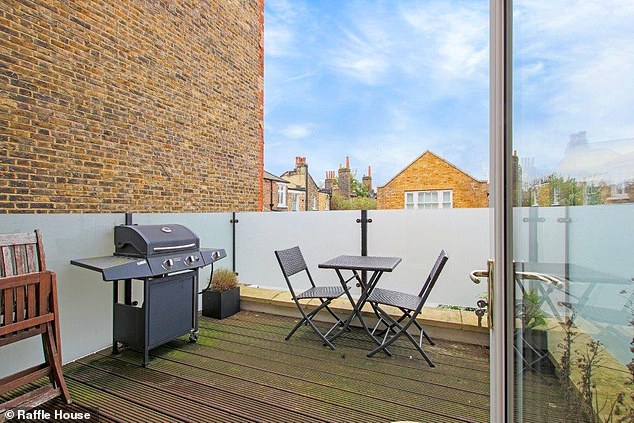 Benno, chief executive of Raffle House, told This is Money: ‘We launched Raffle House with one clear aim: to help people win homes.

‘We’re reducing the minimum number of tickets we need to sell by 20 per cent to help ensure that it’s the property in Brixton we award when this raffle concludes, not just cash.

‘This inaugural raffle is not, and never was, about profit for us as a business. It’s about proving someone can win a home for £5. Awarding this property to an aspiring homeowner and building trust in the Raffle House model is our only focus.

‘This is not some ill thought-out scheme like other so-called ‘raffles’ that have popped up in recent years.

‘We’re battling understandably pessimistic perceptions of this industry and therefore want to ensure we create a trustworthy competition platform that honours its commitment of awarding aspirational homes.’

The Gambling Commission has cautioned people who are raffling off their homes as well as those buying tickets.

It voiced its concern about some ‘raffles’ where organisers are breaking the law as their scheme has been set up in a way that means it is actually an illegal lottery.

In order to combat being labelled as a lottery, one thing firms must do is ask a question to those taking part to ensure the competition is a raffle.

Lotteries often need a license from the Gambling Commission and can only be used for good causes.

Raffle House works by players purchasing raffle tickets for £5 each – after they’ve correctly answered a question to enter.

Once a minimum threshold has been reached, the draw is held and the property is awarded.

Although raffling off properties can be a great way for the owner of the property to make money and for the winner to get a new home for just £5, there have been a number of reported instances where raffles have not delivered what they promised.

A couple of raffles recently made headlines for awarding winners cash prizes that were much smaller than the value of the property available.

A homeowner of a £2.5million Scottish castle, who put it up for offer as a raffle prize was recently reprimanded by the advertising watchdog after the winner received £65,000 instead.

The owner made tickets available for £5 on website winacastle.co.uk but the raffle failed to generate enough tickets and the prize was instead changed to cash giveaways which were handed out in June of last year.

After the Advertising Standards Agency were contacted, she argued that it wasn’t possible to give up the property if there wasn’t enough money to clear the mortgage and said it was clear from the beginning cash would be given as a prize if there were not enough tickets sold.

Another well documented case was of a couple who were raffling their £3million home.

They raised £750,000 in the process, instead of the £3million home initially offered.

Although, it did say in the small print that any replacement cash prize would amount to 75 per cent of the value of tickets sold after promotion costs, the top prize handed out after the draw was £110,000, meaning promotion costs must have amounted to some £600,000.

The couple maintain they spent £640,000 in advertising, marketing, PR and legal costs for the competition.

The Gambling Commission has confirmed it is investigating the case.