UFO sightings received by a dedicated RAF unit are to be published online.

The RAF closed its UFO unit in 2009 after concluding that – in more than 50 years – none of the reports showed evidence of a threat.

Records were handed to the National Archives, often classified before being released after a number of years.

But an RAF spokesman said the most recent reports are now going online.

This phenomenon was photographed by a retired RAF officer. He sent this photo to his old bosses tasked with investigating UFOs. The RAF closed its UFO unit in 2009

A spokesman for the RAF said that ‘it had been assessed that it would be better to publish these records, rather than continue sending documents to the National Archives, and so they are looking to put them on to a dedicated gov.uk web page’.

It added: ‘The MoD has no opinion on the existence or otherwise of extra terrestrial life and does not investigate UFO reports.’

A clearance process for the documents is currently under way before publication, which is expected to take place ‘some time within the first quarter of 2020’.

Ex-Ministry of Defence UFO investigator Nick Pope said: ‘Given the massive public interest in this subject, I’m pleased that these files will be released and made available online… I’m glad the public are to be given insights into our work on these real-life X-Files.’ 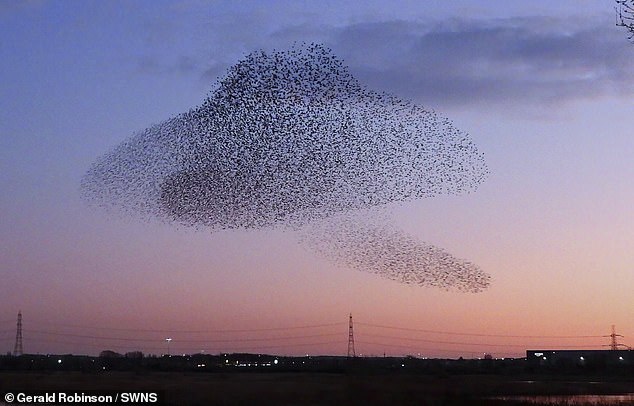 A flock of 70,000 starlings were seen earlier this month flocking to form the shape of a spaceship on a nature reserve in South Yorkshire. UFO sightings received by a dedicated RAF unit are to be published online