The storm that has ripped through the Pacific this week rapidly disintegrated south of Honolulu over Friday night, but meteorologists have warned heavy rains and strong winds still pose a threat to the islands.

Early Saturday morning, Lane was located some 135 miles south-southwest of the Hawaii capital and creeping toward it at just 3mph.

At a news conference Friday, Honolulu Mayor Kirk Caldwell urged people not to let their guard down while acknowledging that the state had ‘dodged a bullet’.

Dramatic photographs show the devastating flooding Lane has left in its wake after it unleashed nearly three feet of rain over just 48 hours, forcing thousands of residents on the Big Island to flee their homes and seek shelter. 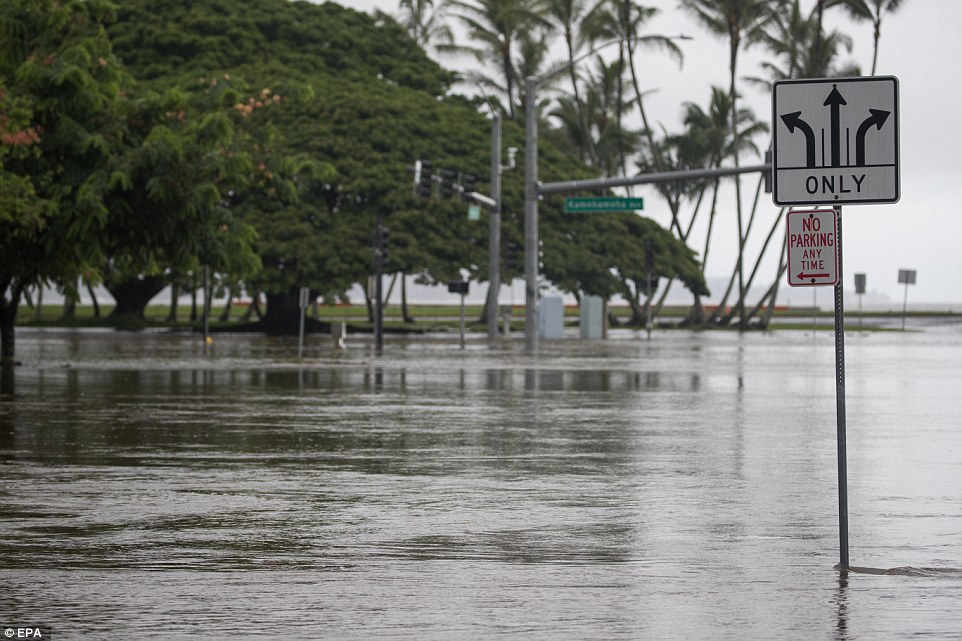 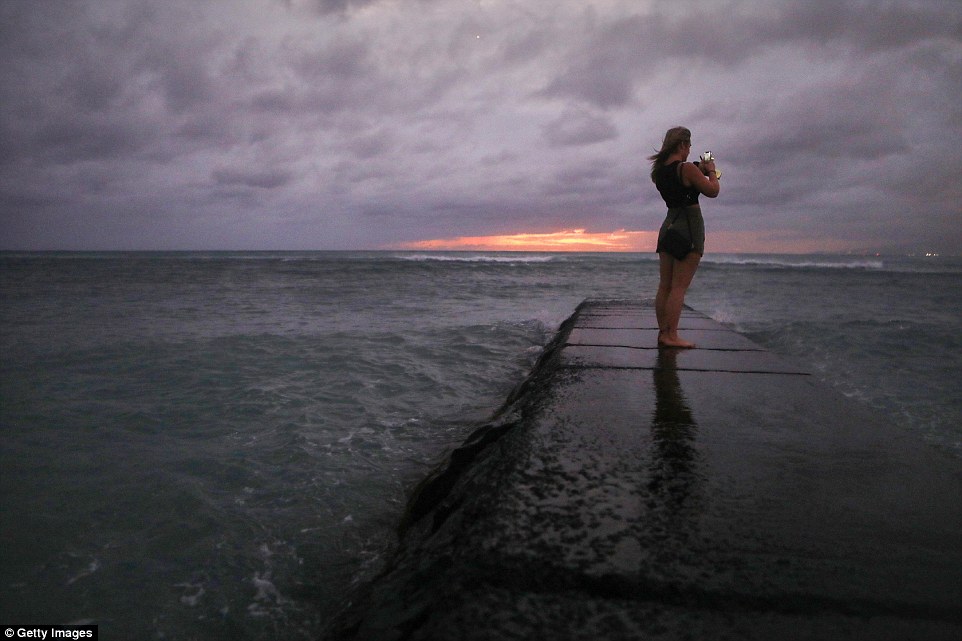 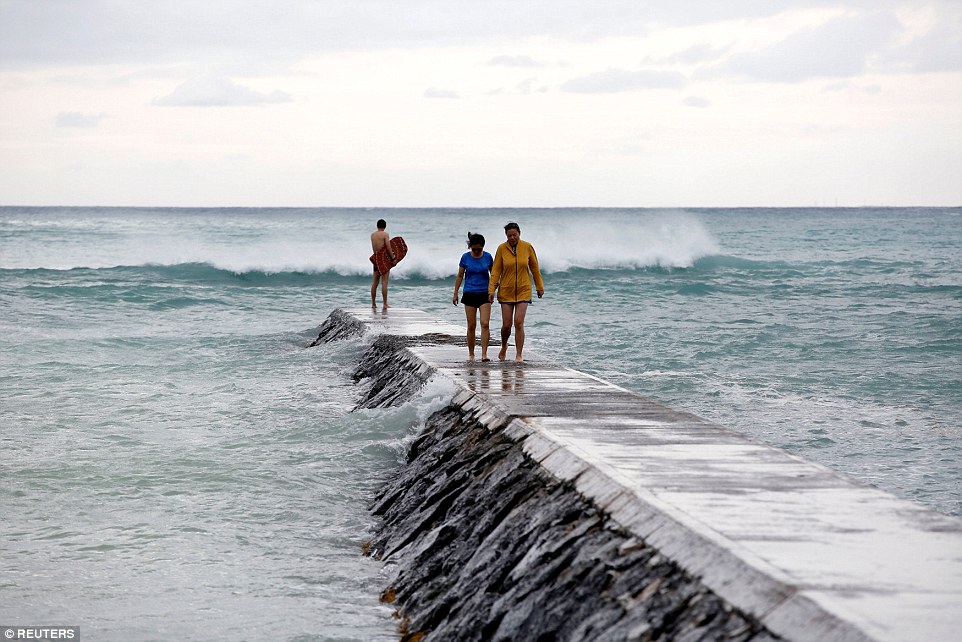 Lane roared toward the island chain early this week as the most powerful type of hurricane measured: a Category 5 on the Saffir-Simpson Hurricane Wind Scale. That meant it was likely to cause catastrophic damage with winds 157 mph or above.

But upper-level winds known as shear swiftly tore the storm apart. By late Friday, the National Weather Service said Lane had maximum sustained winds of 70 mph as it slowly twisted west about 120 miles south of Honolulu.

The rains have left the city of Hilo – home to 43,000 – waist-deep in water as National Guard and emergency services scrambled to rescue six people and a dog from their flooded residence. Five tourists from California were also rescued from another home, according to CBS.

‘There’s so much rain, the drainage is all saturated. We’re just letting nature take its course, getting water down to the ocean and responding to any rescues,’ Hawaii County Managing Director Wil Okabe said.

Margaret Collins, 69, woke up Thursday night to sounds in her Hilo backyard.

‘So I got up out of bed and looked out my bedroom window and saw water three feet high gushing past my window,’ she said. ‘And that’s when I realized I was standing in water.’

Collins called a neighbor for help, who crawled through bushes to bring her out of the house, half-carrying her as she clutched a plastic bag with medication.

The water knocked down a cement wall and lifted her truck out of the carport, sending it toward her neighbor’s house, she said.

‘My house is completely inundated with mud-water,’ said Collins, who was told the damage wouldn’t be covered by insurance. She hopes she can get federal assistance. 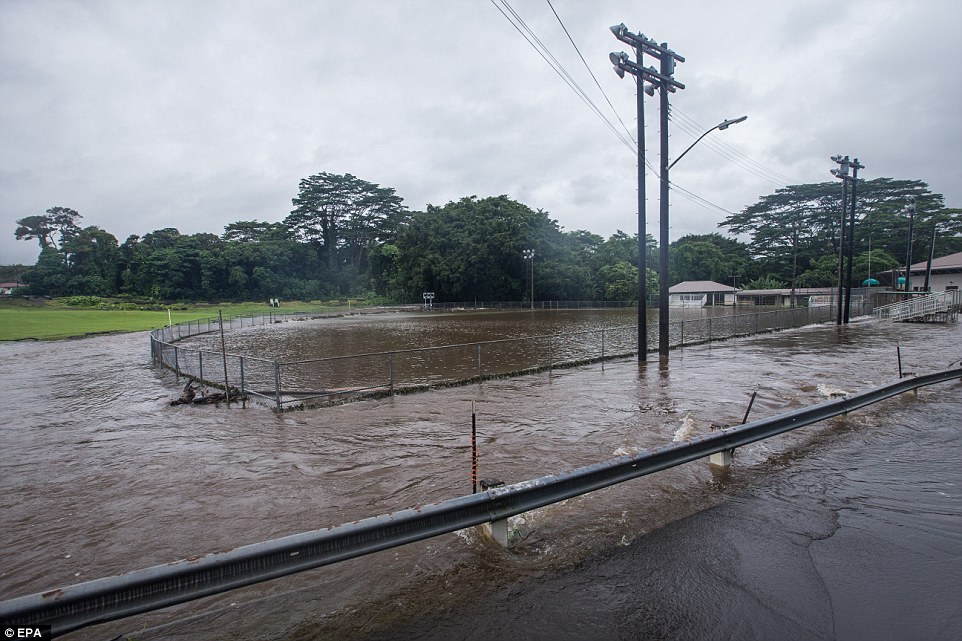 After 48 hours of unrelenting rain, water stills on a flooded street in Hilo, Hawaii, a city on the eastern shore of the Big Island 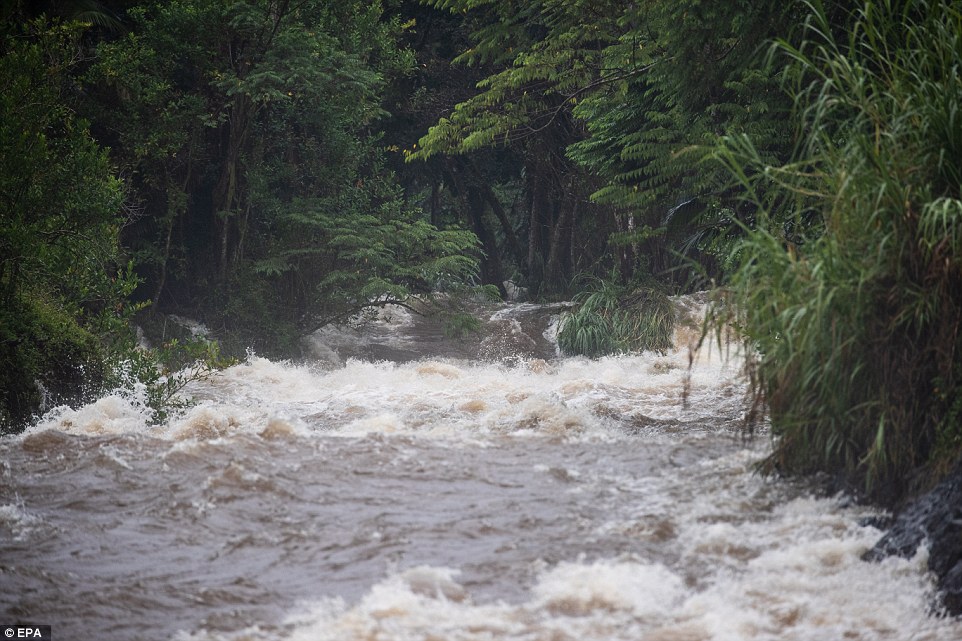 A once quiet stream gushes in Hilo, Hawaii, after nearly three feet of rainfall caused waterways around the island to swell 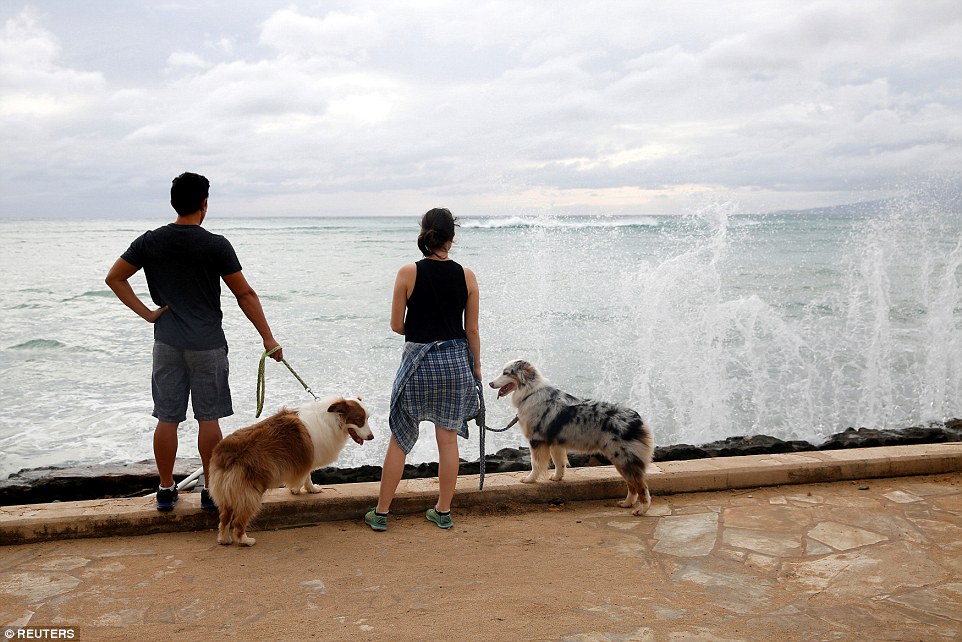 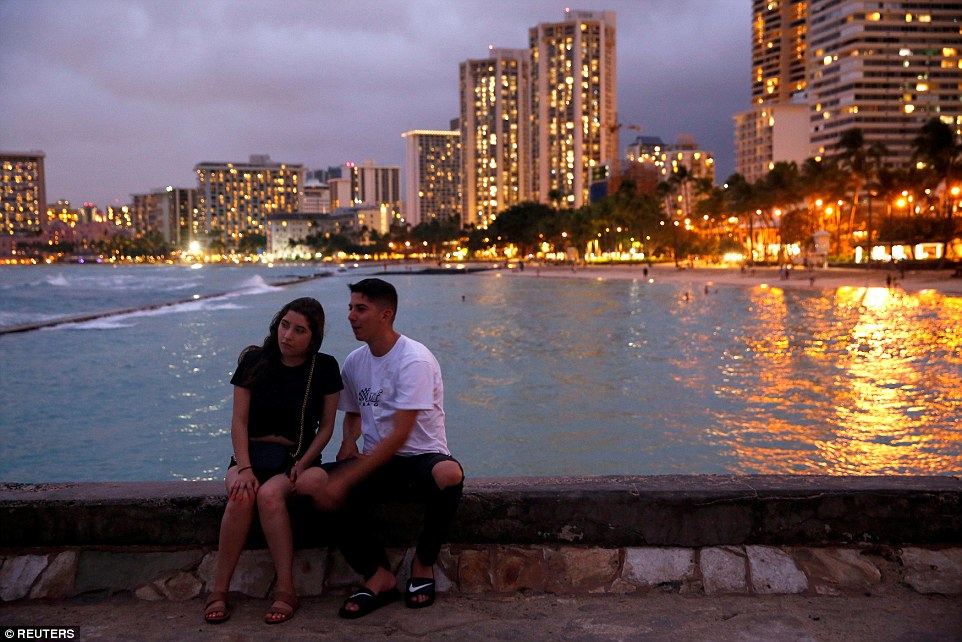 Shannon Velez, 23, and Miguel Aceves, 23, who were visiting from Los Angeles, enjoy the calm on a pier in Waikiki Bay 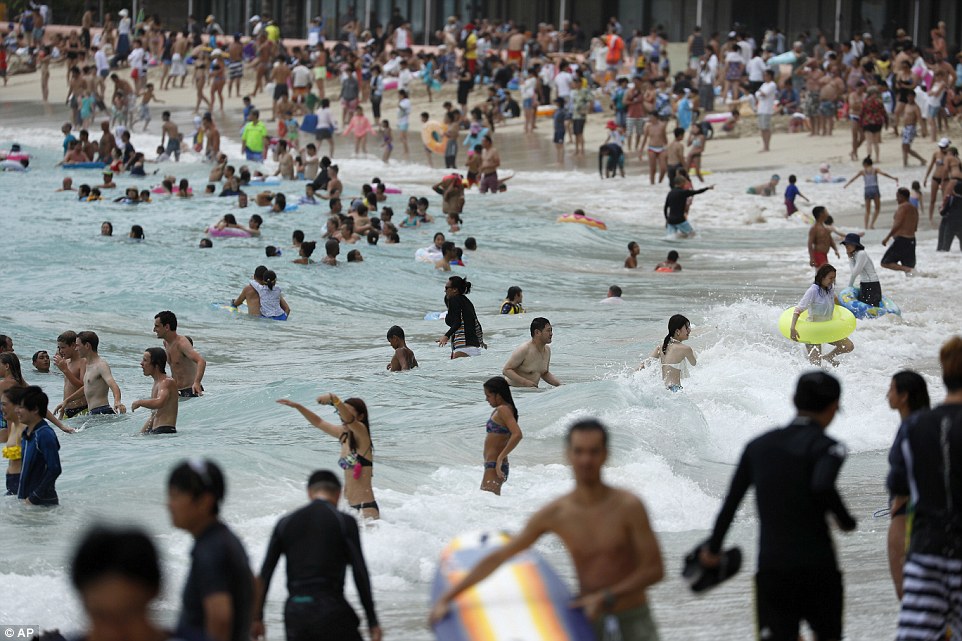 More than 2,000 people have taken shelter at 45 evacuation centers yet still many were seen on a crowded Waikiki Beach

Elsewhere on the Big Island, the National Guard and firefighters rescued six people and a dog from a flooded home, while five California tourists were rescued from another house.

A different type of evacuation took place on Oahu, the state’s most populated island.

Officials with the Department of Land and Natural Resources transferred about 2,000 rare Hawaiian snails from a mountain marsh to offices in downtown Honolulu. A staffer will spend the night and place ice around their cages in case the air conditioning goes out.

Some of the snails are the last of their kind, including one named George that’s the sole remaining Achatinella apexfulva in captivity. Staff members are trying to keep him safe in case he’s able to reproduce. 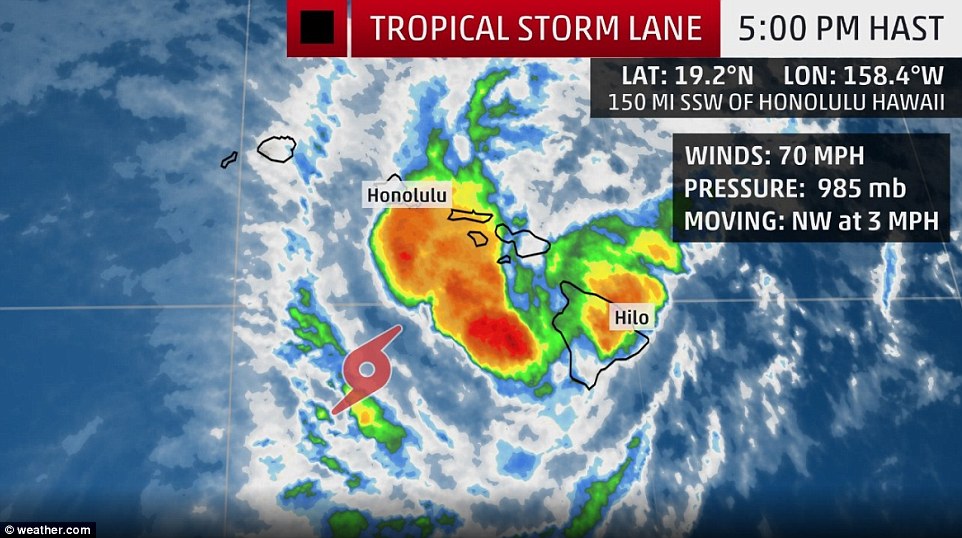 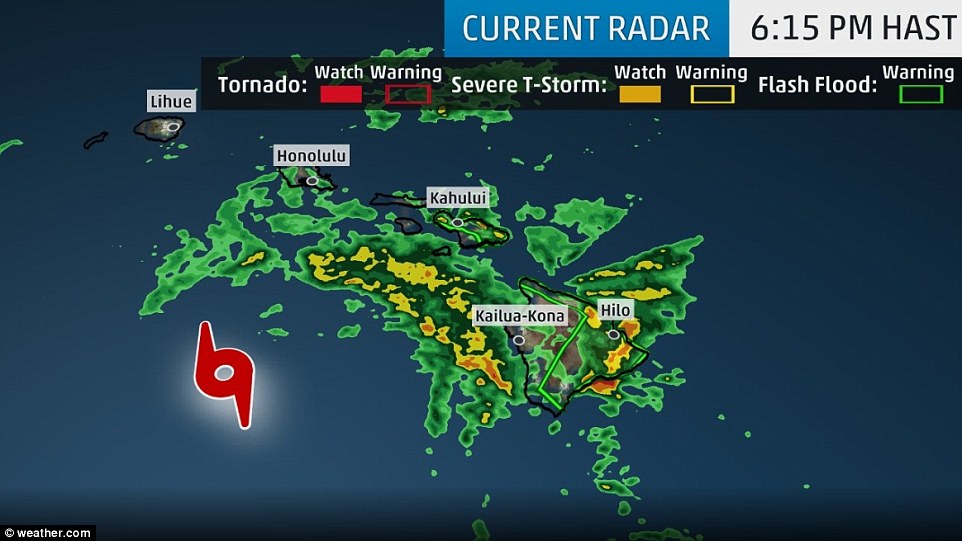 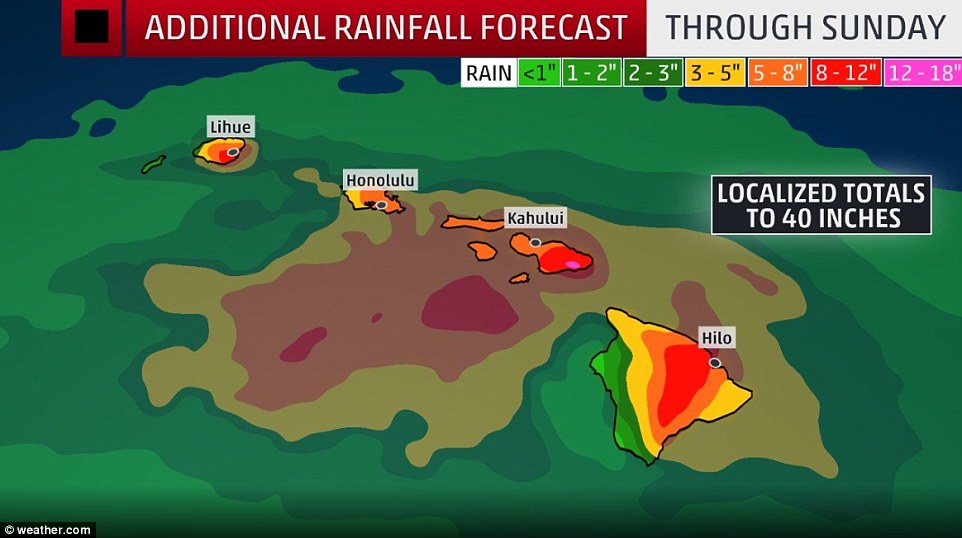 As flooding hit the Big Island, brush fires broke out in areas of Maui and Oahu susceptible to flames.

Some residents in a shelter on Maui had to flee when a fire got too close, and another fire forced people from their homes. A woman got burns on her hands and legs and was flown to Honolulu, Maui County spokesman Rod Antone said. Her condition wasn’t clear.

A man posted a video on Instagram showing flames several stories high starting to envelop parked cars. Josh Galinato said he was trying to sleep when he smelled smoke in his apartment in the tourist town of Lahaina.

‘I opened up my front door, and I just saw the fire spreading and coming downhill,’ Galinato said. He and neighbors honked horns to alert others to the danger.

Joseph Azam, who was vacationing in Maui with family and friends, hoped rain from the hurricane arrived before the flames did.

‘Trying to figure which comes first, the fire or the rain,’ said Azam, who’s from Oakland, California, and is staying at a hotel. ‘We’re praying the rain arrives soon.’

Others prayed for the rain to stay away. 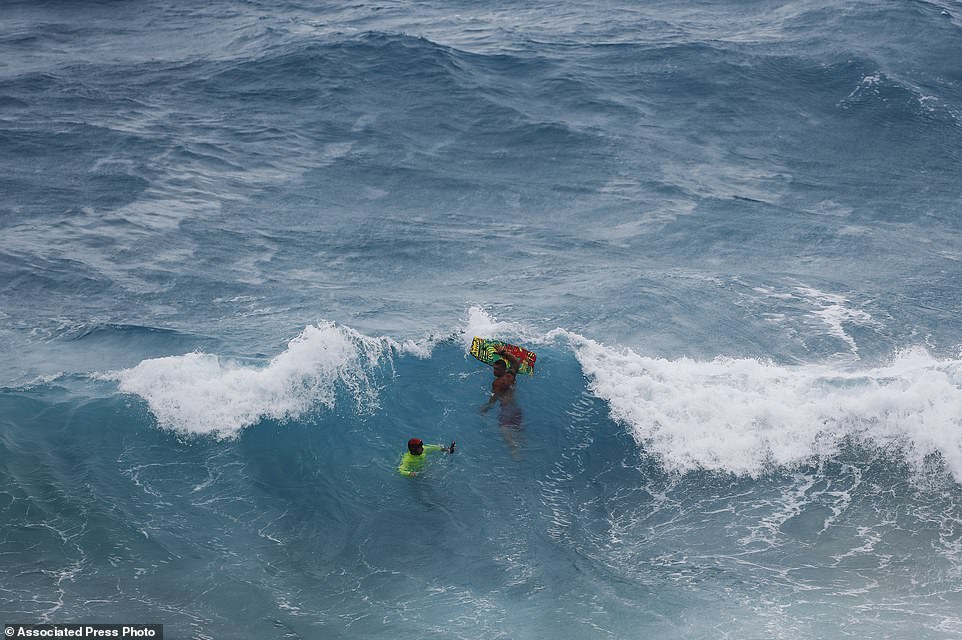 Swimmers get tossed around at Makapu’u Beach on Friday iin Waimanalo, Hawaii as the hurricane approached Oahu 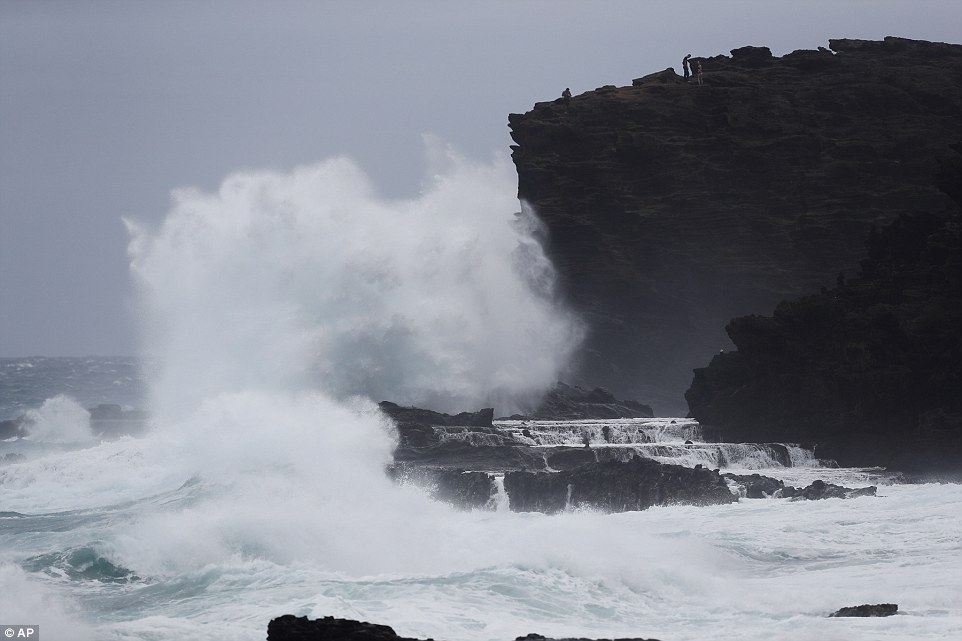 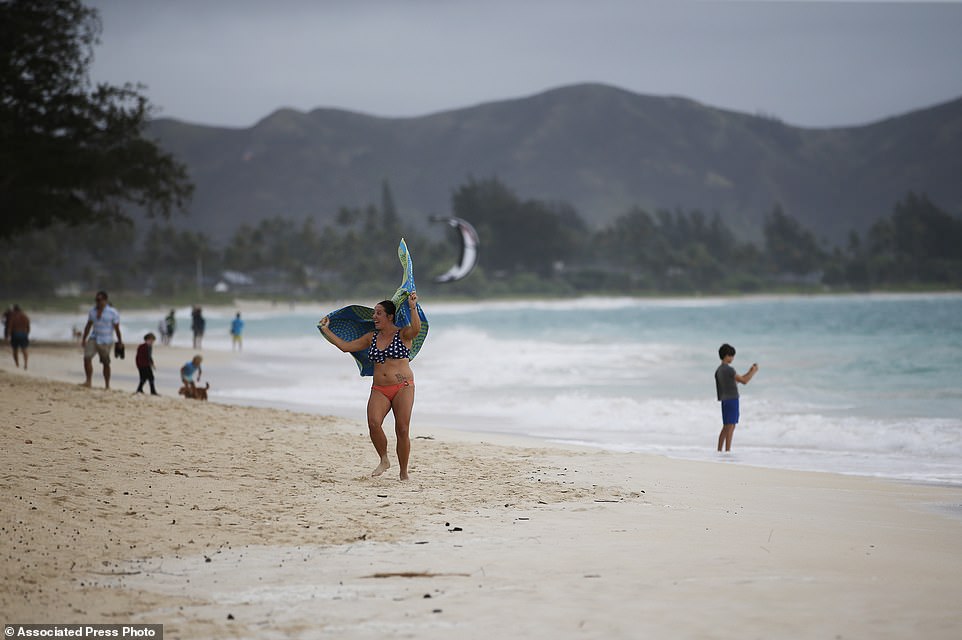 In Waikiki, the man-made Ala Wai Canal is likely to flood if predicted rains arrive, said Ray Alexander of the US Army Corps of Engineers. The canal marks the northern boundary of the Waikiki tourist district. Worries that it could overflow in heavy rains have prompted efforts to reduce the risk.

‘The canal has flooded in the past, and I believe it’s safe to say based on the forecast of rainfall it’s likely to flood again – the impacts of which we aren’t prepared to say at this time,’ Alexander said.

Officials received $345million last summer to build detention basins, a flood wall and pumping station, beginning in 2020 and expected to be completed in 2023, Alexander said. 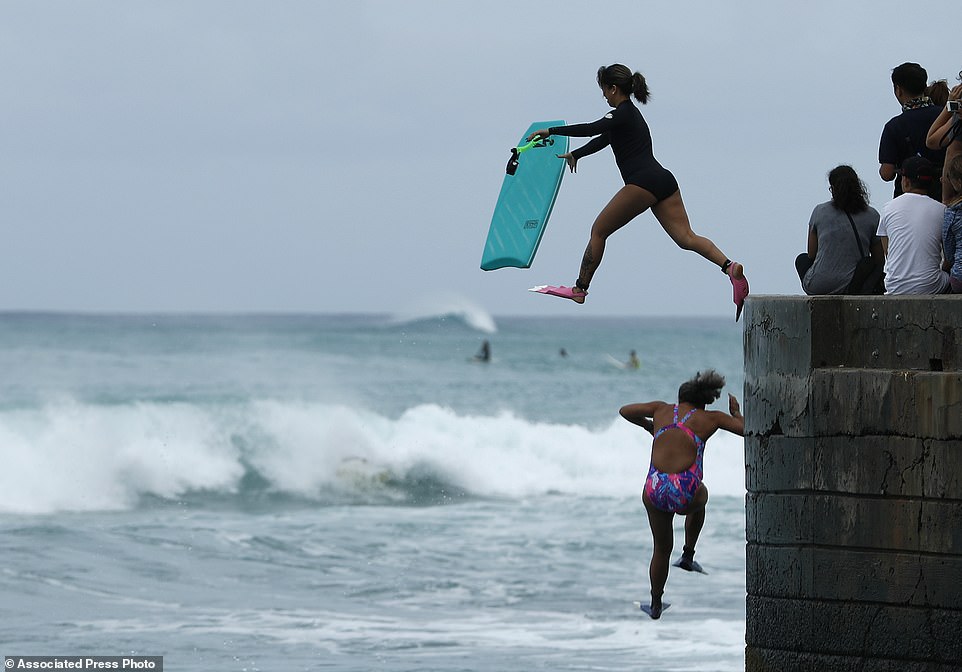 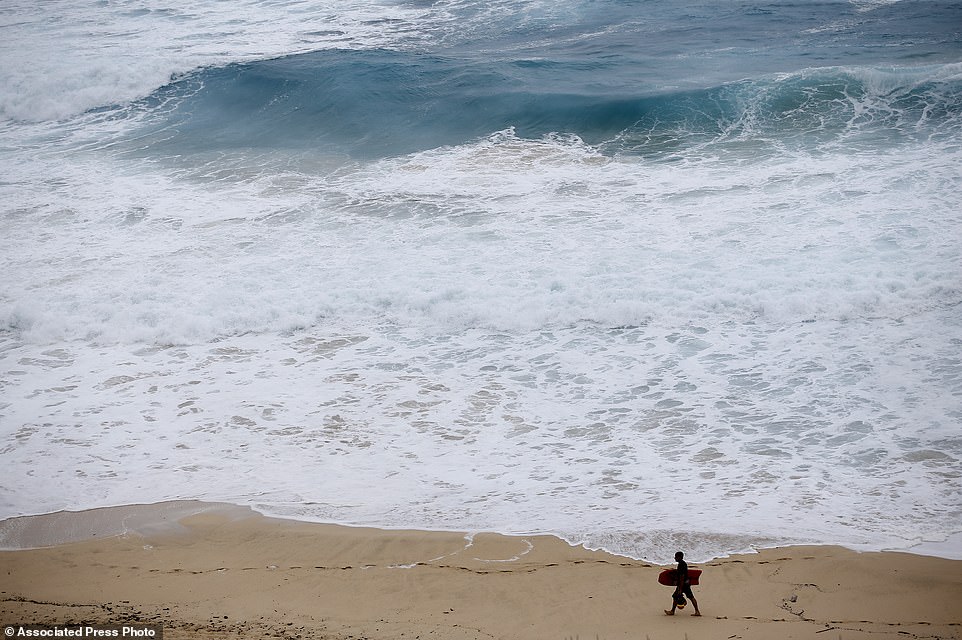 A boogie boarder walks near the swollen surf at Makapu’u Beach on Friday in Waimanalo, Hawaii 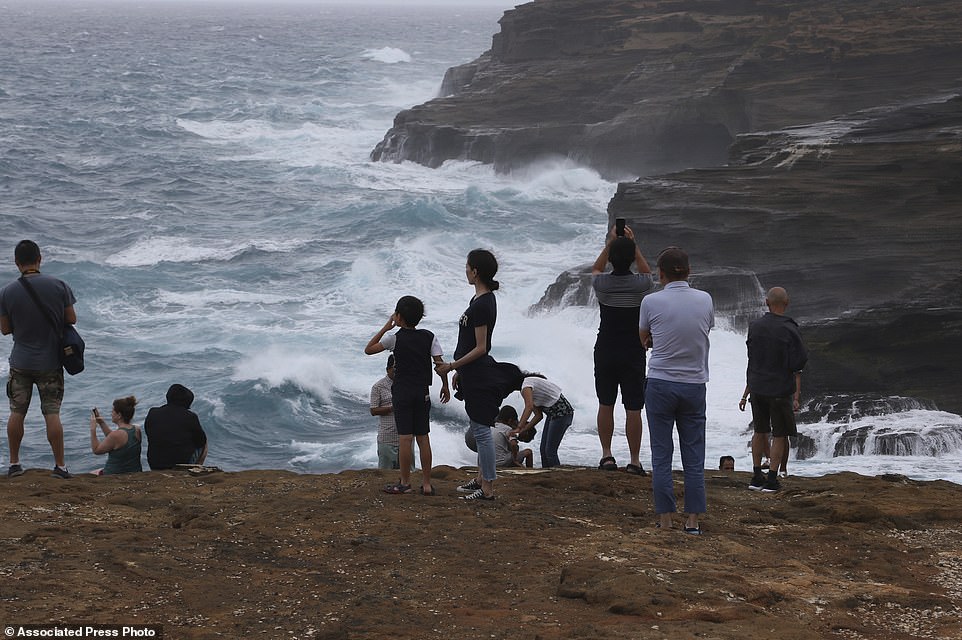 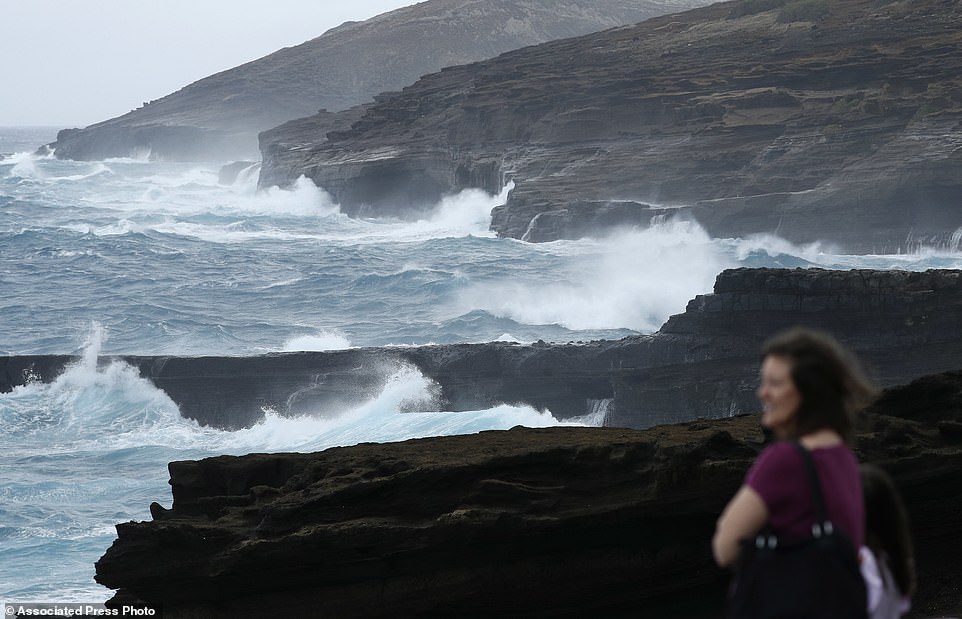 Not everyone feared the storm.

Swimmers and surfers ignored warnings from authorities and plunged into powerful waves at Oahu’s famed Waikiki Beach, which was closed.

Emergency officials said repeatedly over loudspeakers: ‘Please get out of the water! It’s very dangerous!’ Honolulu mayor Caldwell pleaded with tourists that they were putting themselves in danger as the storm churned closer.

‘I came in to visit, got here just in time for the hurricane,’ Bowden said. ‘We’re kind of excited.’

The central Pacific gets fewer hurricanes than other regions, with about only four or five named storms a year. Hawaii rarely gets hit. The last major storm to hit was Iniki in 1992. Others have come close in recent years. 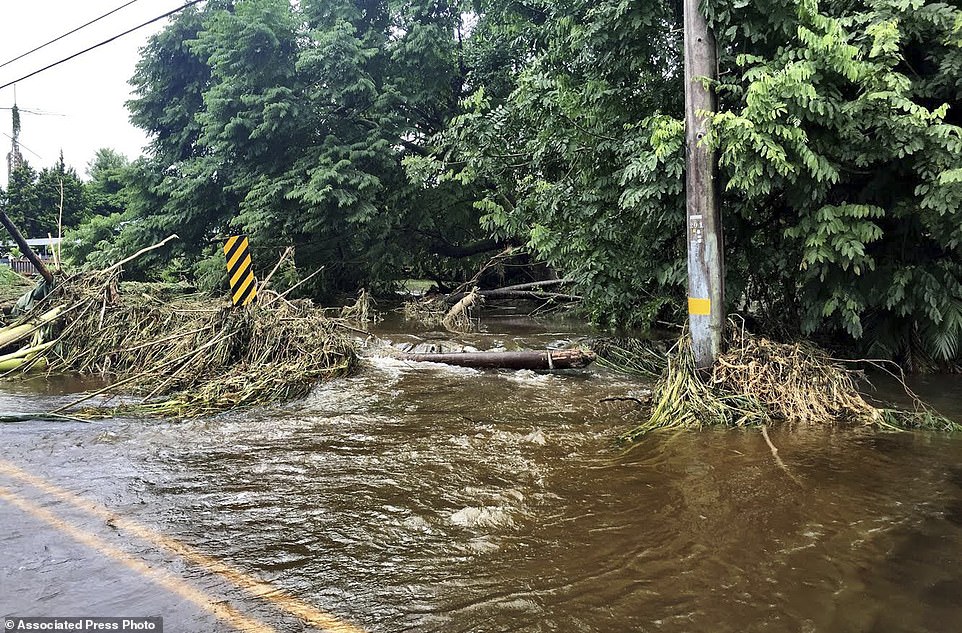 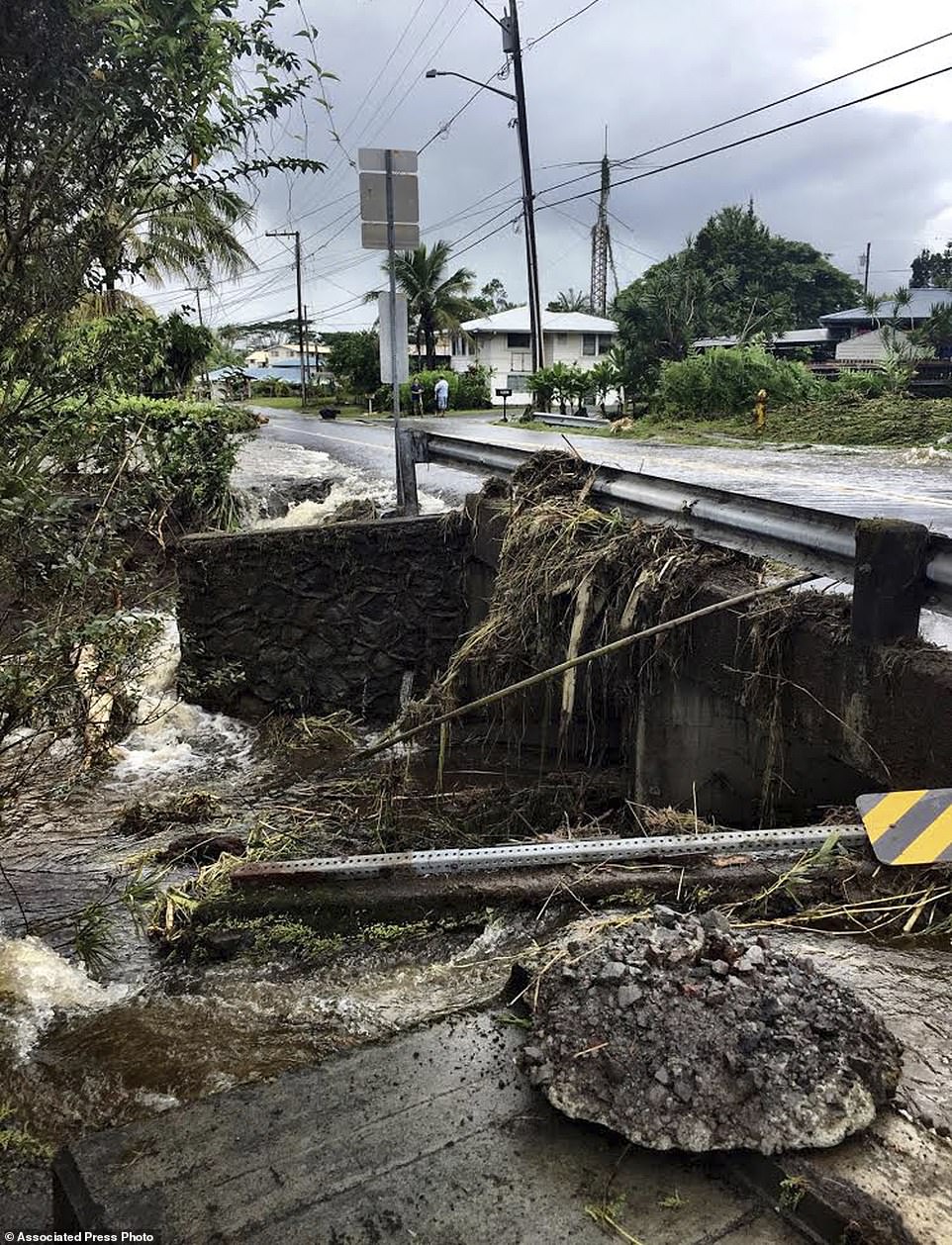 The city of Hilo, Hawaii was inundated with rain leaving residents stranded waist-deep in water following the deluge 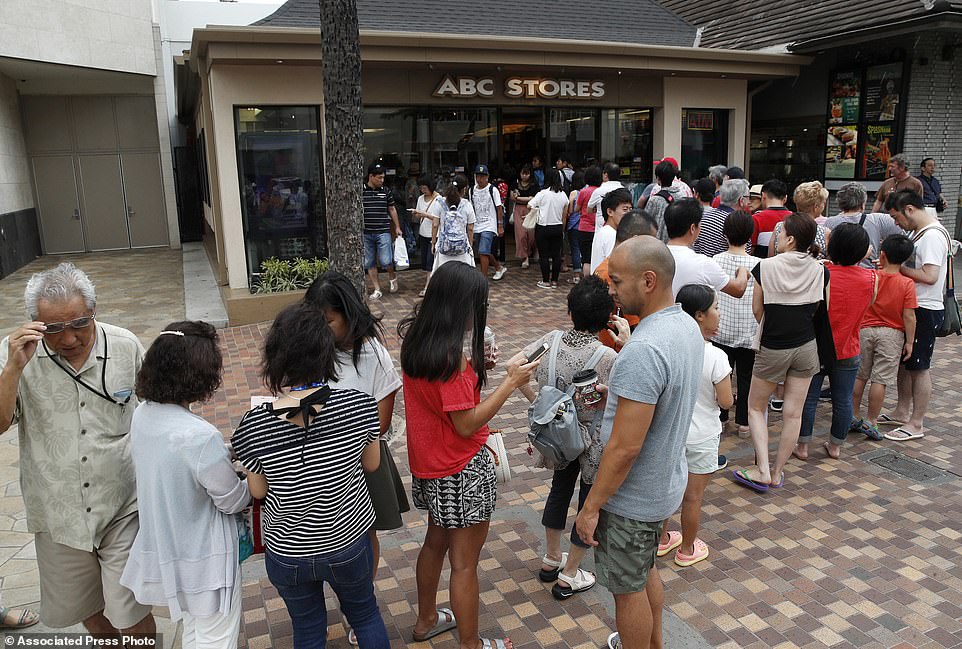