The wildfire in Northern California has almost been extinguished after several days of rain, and those in Southern California are returning home after the worst case in a century continued for two weeks.

But searchers are still completing the meticulous task of combing through now-muddy ash and debris for signs of human remains in the worst-hit city of Paradise.

Crews looked through destroyed neighborhoods for a second time trying to identify telltale fragments, bone or anything that looks like a pile of cremated ashes as 475 were still on a missing persons list when the blazes were 95 percent contained.

After a brief delay to let a downpour pass, volunteers resumed their search for human remains at a mobile home park in Paradise Friday 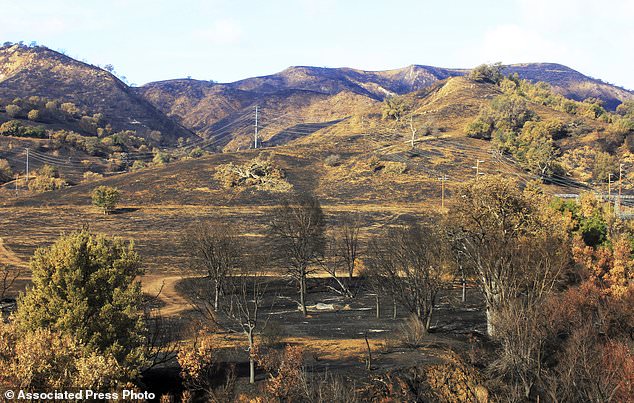 In Southern California, more residents were allowed to return to areas that were evacuated due to the 151-square-mile (391-square-kilometer) Woolsey Fire as crews worked to repair power, telephone and gas utilities

The deadliest wildfire for a long time in the United States killed at least 84 people after flames ignited November 8 in the parched Sierra Nevada foothills.

Named the Camp Fire, it then quickly spread across 240 square miles (620 square kilometers), destroying most of Paradise in a day.

The fire burned down nearly 19,000 buildings, most of them homes, and displaced thousands of people, the California Department of Forestry and Fire Protection said.

But the fight against the infernos got a boost Wednesday from the first significant winter-like storm to hit the state. 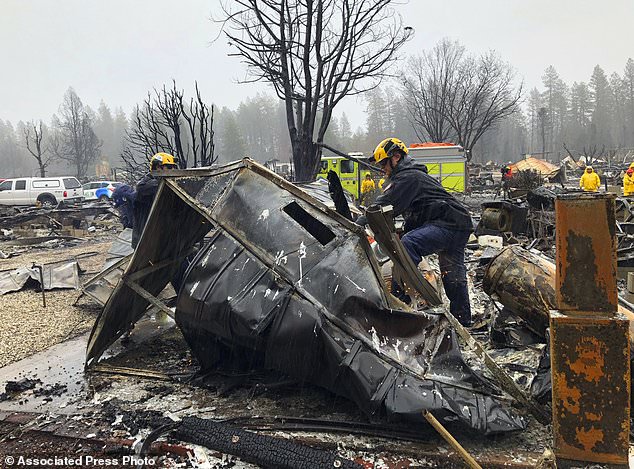 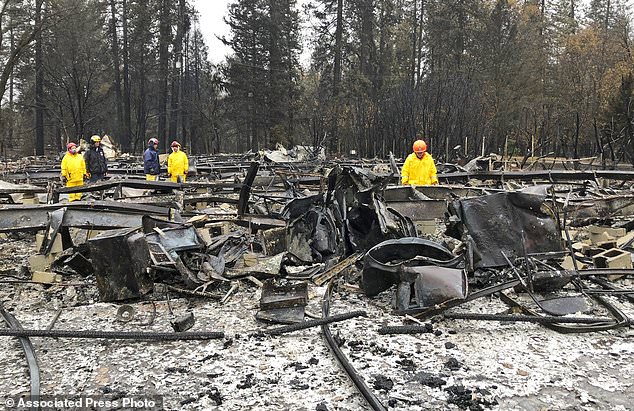 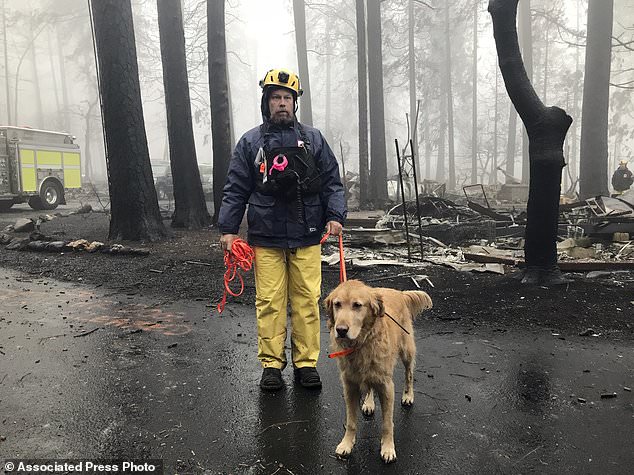 It dropped an estimated 7 inches (18 centimeters) of rain over the burn area over a three-day period without causing significant mudslides, said Hannah Chandler-Cooley of the National Weather Service.

Despite the inclement weather, more than 800 volunteers kept searching for remains.

Crews worked on-and-off amid a downpour Friday. While the rain made everybody colder and wetter, they kept the mission in mind, said Chris Stevens, a search volunteer who wore five layers of clothing to keep warm.

Steven McKnight and Daniel Hansen were pictured sawing through large pieces of sheet metal so they could be moved to allow cadaver dogs to search beneath at a mobile home park.

‘It doesn’t change the spirits of the guys working,’ he said. ‘Everyone here is super committed to helping the folks here.’ 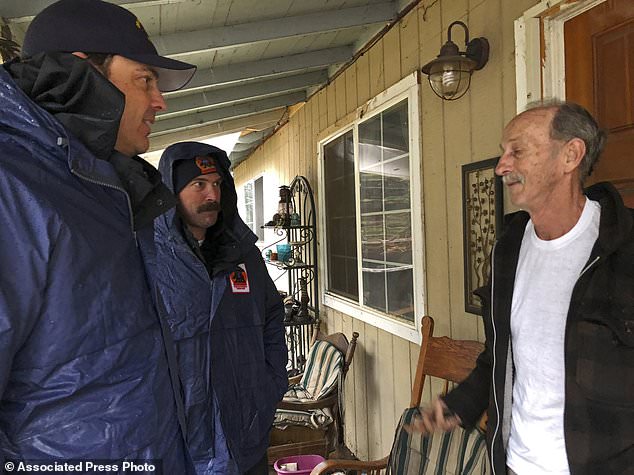 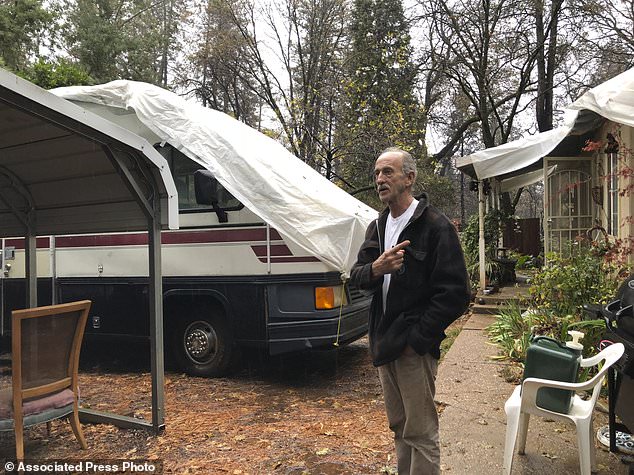 Resident Stewart Nugent stayed in his home during the Camp Fire 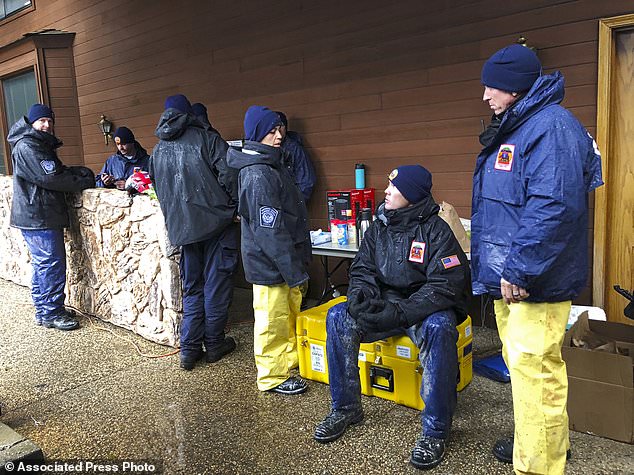 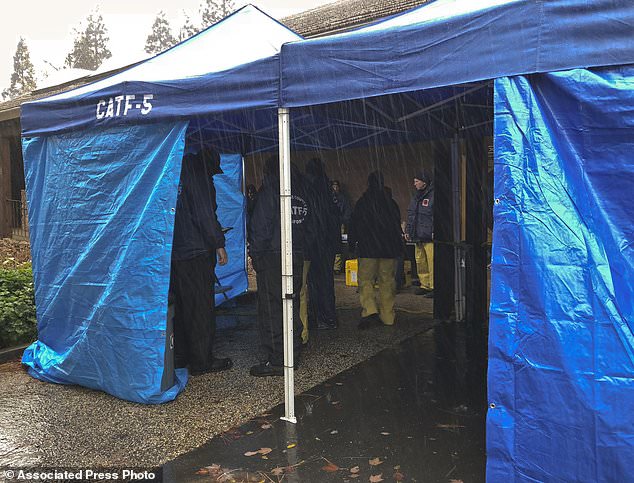 Los Angeles County sheriff’s officials said they were in the last phase of repopulating Malibu and unincorporated areas of the county. At the height of the Woolsey fire, 250,000 fled their homes.

But the scene around Malibu State Park was a shadow of itself with some burned bushes now standing in place of the usually green landscape in the Golden States.

On the same day as the Northern California fire sparking off, one in Los Angeles burned through suburban communities and wilderness parklands to the ocean. 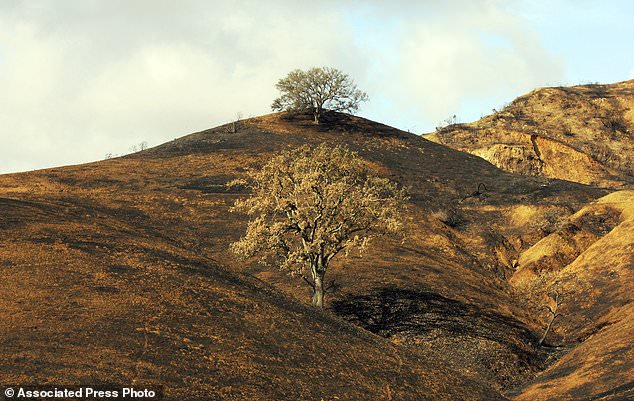 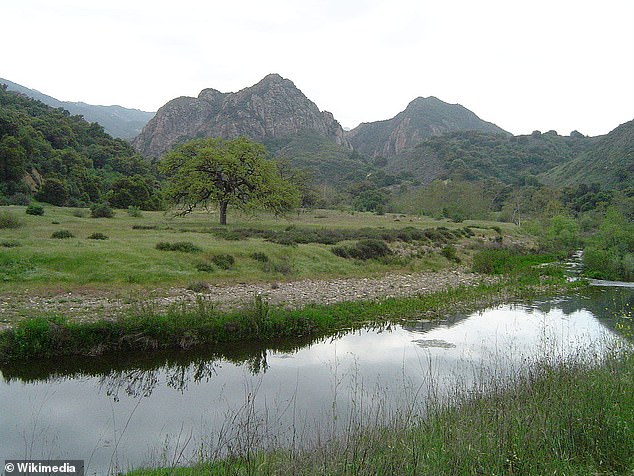 Three people died down there, and 1,643 buildings, most of them homes, were destroyed, officials said.

In Northern California, searchers tried to keep their minds on the task rather than the tragic situation.

‘The guys will never say it’s hard,’ crew member David Kang said. ‘But it is.’

Covey and several team members took two giant brown bags full of lunch to the 64-year-old, who stayed in his home and fought off flames.