Raine Spencer should be remembered for blazing a trail through society, says her biographer

London, early 1990. Had I not just been made beauty editor of Tatler I should likely never have set eyes on Countess Raine Spencer. The occasion was a drinks party at an auction house and the soirée was in full swing when a towering vision with huge sculpted hair, vast taffeta skirt and twinkling diamond jewellery sailed into the room.

As the crowds parted, a hushed reverential awe fell over the champagne-quaffing throng. ‘Who on earth is that?’ I hissed to my neighbour as the woman wafted by, smiling broadly, kissing friends on both cheeks, ‘Dah-ling, hello,’ and turning every few seconds to check on her rotund, smiling husband.

‘Where on earth have you been?’ asked my bouclé-suited drinking partner, aghast at my ignorance. ‘That’s Princess Diana’s wicked stepmother Raine and her husband Earl Spencer. He’s lovely, but she’s a real piece of work.’

So that was Raine Spencer. Having lived in the United States for the previous four years, I’d vaguely heard about the feud between the world’s most glamorous woman and her stepmother. This side of the water, however, headlines such as ‘Raine, Raine go away!’ abounded, and everybody knew exactly who ‘Acid Raine’ was.

But this woman was not at all what I had expected. She had poise and presence; who else other than a royal or a Hollywood movie star could silence a room so completely? I was fascinated.

Countess Spencer photographed in 2015. Raine had also meticulously planned her own farewell

On my return to the Tatler office, among the coffee cups, broken pearl necklaces and empty champagne bottles, I consulted the oracle: Peter Townend, the magazine’s social editor and a former author of Burke’s Peerage. After fixing me with the sort of world-weary frown he might employ on a badly behaved gun dog, he enlightened me. ‘The thing about Raine,’ he said, after offering a rundown of her pedigree – former deb of the year and bride of the year ‒ ‘is that it’s what she did before she met Johnnie Spencer that makes her so interesting’.

And so, when I should have been writing about Estée Lauder lipsticks, instead I spent hours researching Raine…and I discovered she was not at all as she seemed. Neither aristocratic, nor fabulously wealthy at her birth on 9 September 1929, the then Raine McCorquodale was the daughter of Barbara Cartland, the pink-hued, panda-eyed penner of bestselling romance novels, who assiduously sought to make her daughter what she was not: titled.

She managed it, too, after positioning Raine as debutante of the year in 1947, among the 20,000 hopefuls to be presented to King George VI at the first ceremony since the war.

Raine went on to marry the Hon Gerald Legge (heir to an earldom). A smart home in Belgravia, Central London, decorated by society interior designer David Hicks, and two children, William, born in 1949, and Rupert in 1953, soon followed. (Her other two children with Legge, Charlotte and Henry, were born over a decade later.)

By luck or good judgment – likely a bit of both – Raine was part of the riotously fun smart set led by Princess Margaret, sister of Queen Elizabeth II. Like many other privileged young women of her generation, Raine could have spent her time socialising, doing charity work and waiting for her husband to inherit. But she had been imprinted with her mother’s work ethic.

The redoubtable Cartland, who had survived a scandalous divorce, had worked ferociously hard in her job as a newspaper columnist and novelist to send Raine and her two stepbrothers to private schools. Not that Cartland thought Raine’s intelligence was an asset: ‘Oh, do tidy your hair, darling. No man wants a clever woman,’ she would say whenever Raine burst through the door with news of her latest academic achievement. 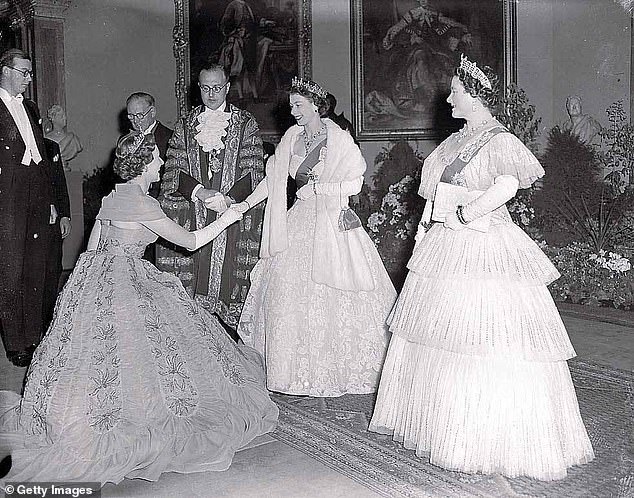 Raine meeting Queen Elizabeth II and the Queen Mother in 1956. Neither aristocratic, nor fabulously wealthy at her birth on 9 September 1929, the then Raine McCorquodale was the daughter of Barbara Cartland

Nonetheless, as Cartland later admitted after Raine had married and given birth to the prerequisite heir and spare, ‘we both felt that she should do something to help’.

And so, at the age of 24, Raine Legge, as she then was, won a seat on Westminster City Council as a Conservative. It is hard to imagine what a woman with a butler, cook, maid and nanny might want from a job that entailed legislating on everything from sewers to car parks, but she relished the challenge.

Later she would win seats on East Lewisham and Richmond councils, before finally giving up politics after meeting Earl Spencer in 1972 (Raine and her first husband eventually divorced in 1976). As the original society It-girl in the 50s and 60s, Raine was in demand from newspapers and TV shows clamouring for her views on everything from teenage angst to male grooming.

Raine had been a serious player, too, in her role as chairman of the Greater London Council’s Historic Buildings Board, and had helped save Covent Garden Piazza, the National Portrait Gallery and the façade of what is now Tate Britain. She had also contributed to the world’s first Earth Summit ‒ the UN Conference on the Human Environment in Stockholm in 1972 ‒ for which she authored A Report on the Human Habitat.

But it was when Raine began hitting the headlines in association with Earl Spencer that the news cuttings revealed a dramatic and vertiginous downswing in her popularity. A hate campaign saw her pitted as the evil stepmother against the Spencer children, one of whom, Diana, would marry the heir to the throne. Gone were the positive headlines and in their place were accusations that Raine had done everything from turning the Spencer children out of their bedrooms at their stately home of Althorp, to selling off their inheritance in the form of art and antiquities to fund the property’s renovations. 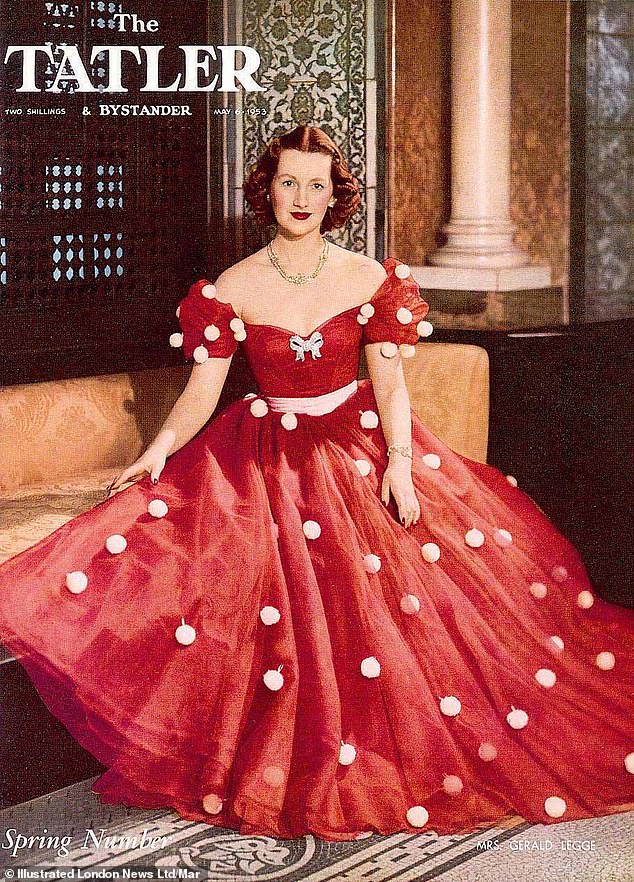 Raine on the cover of Tatler in 1953. As the original society It-girl in the 50s and 60s, Raine was in demand from newspapers and TV shows clamouring for her views on everything from teenage angst to male grooming

Fast-forward to 2018, by which point Raine had been dead for two years. Having given up my job as a magazine editor because of chronic illness, I was talking to my agent about writing a series of biographies on so-called ‘difficult women’. Raine’s name rose to the top of the pile. Why? Because with the passage of time I had come to know more about this extraordinary woman, and wanted to be sure she was remembered for the right reasons.

A little over a decade previously she had been the key witness in the coroner’s inquest into the death of Diana, Princess of Wales at the Royal Courts of Justice. The pair had been reconciled since Raine’s third marriage (a year after Spencer’s death) to Count Jean-François Pineton de Chambrun in 1993.

While the marriage had not lasted, Raine’s relationship with the Princess had deepened: ‘She would ring up and, at very short notice…come round and sit on the sofa and talk… she said that I had no hidden agenda,’ Raine told the inquest.

At a time when Diana was estranged from her mother – the two had supposedly fallen out over Diana dating ‘Muslim men’ ‒ Raine had become Diana’s chief confidante and greatest supporter. The two women had, after all, cherished three men in common: Earl Spencer, King Charles III (then Prince of Wales, with whom Raine had maintained a rapport) and Dodi Al Fayed. 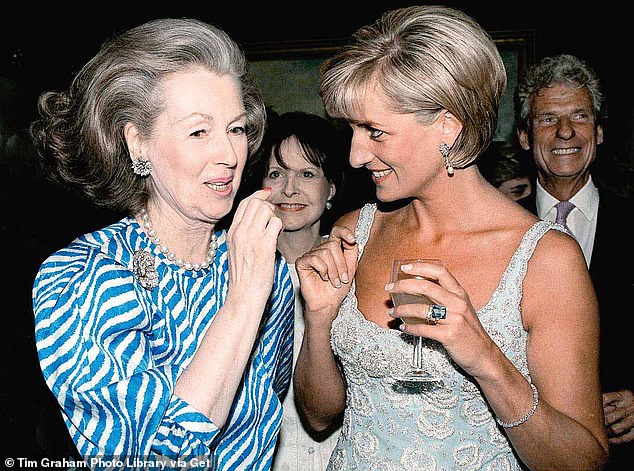 Raine with Diana, Princess of Wales, in 1997. It was thanks to Diana and Dodi’s father Mohamed Al Fayed that Raine was employed in her final and perhaps happiest role, as board director and sometime shop assistant at Harrods

It was thanks to Diana and Dodi’s father Mohamed Al Fayed that Raine was employed in her final and perhaps happiest role, as board director and sometime shop assistant at Harrods. ‘Mohamed, this is the woman you should employ – she can organise anything,’ the Princess told her friend when the three found themselves at a party during early 1996. ‘OK, I will offer her a job,’ responded Al Fayed. ‘I thought he was joking,’ Raine later said. ‘Happily, he wasn’t.’

Raine seized the opportunity, forging a successful career at the store, liaising with wealthy customers. She loved the shop floor, working the tills at every sale. ‘She was particularly good with middle-aged men,’ says a friend. ‘They’d go in looking for a tie and come out with four cashmere sweaters’.

It came as no surprise to learn that Raine had also meticulously planned her own farewell. Having reluctantly relinquished her role at Harrods when she became ill with cancer in late 2014 (something she confided to very few people), she gave a dinner for 35 of her closest friends at Spencer House, thanking each one for their friendship in a thoughtful speech.

It took a while for them to comprehend that she was saying goodbye. ‘Raine never complained or mentioned her illness,’ says her friend Julian Fellowes. ‘She was all about living in the ‘now’.’ She had even persuaded another friend, Michael Cole, former BBC journalist and Harrods public affairs director, to give the eulogy at her memorial service, sending him two typed pages in advance, detailing her achievements. ‘We shall never see her like again,’ rues Cole. ‘Raine was entirely and absolutely a one-off.’

Three Times a Countess: The Extraordinary Life and Times of Raine Spencer by Tina Gaudoin is published by Little, Brown, £25*