Rampage could have been one of those ‘so bad it’s great’ B-Movies, but instead it’s a monster mess

There are some films that can send your spirits plummeting just by being described, let alone seeing the trailer, and Rampage, alas, is one of them.

Never mind that it stars Dwayne ‘The Rock’ Johnson – I’ve been doing this job long enough to know that the likeable wrestler-turned-actor has made some very entertaining films – but Johnson in a film that includes a super-sized gorilla, a wolf the size of a helicopter and the sort of pumped-up alligator that could leave a Tyrannosaurus Rex feeling inadequate?

Nope, as someone who’s never really warmed to King Kong or Godzilla, it didn’t sound like a film for me. 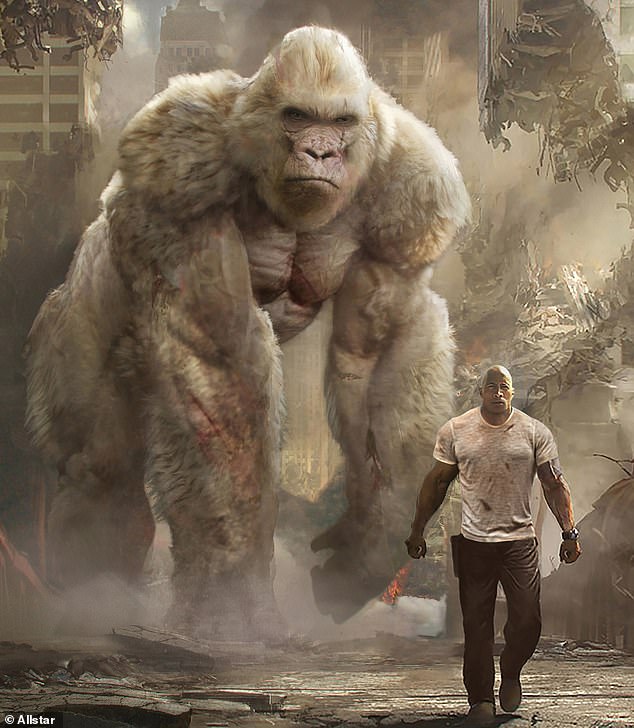 There are some films that can send your spirits plummeting just by being described, let alone seeing the trailer, and Rampage, alas, is one of them

Then I saw the destruction-filled trailer and knew it wasn’t.

Now, however, I’ve seen the whole thing and…? Well, the only good news I can offer is that Rampage is no worse than I expected.

The visual effects so vital to this sort of thing are variable in quality and the ridiculous goings-on are underpinned by a vein of comedy that is clearly meant to signal that everyone involved knows it has been made with tongue in cheek. 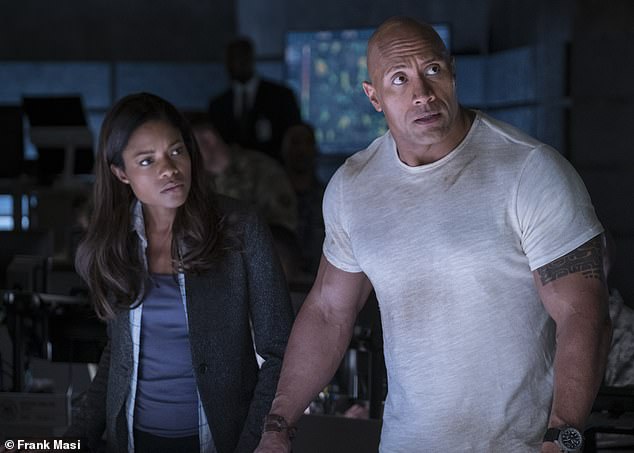 Dwayne ‘The Rock’ Johnson  stars as Davis Okoye (above with Naomie Harris), a musclebound primatologist who has built up a sign-language-based relationship with an albino gorilla

At times it’s pretty obvious that they’ve almost set out deliberately to make a bad film; an old-fashioned B-movie, if you like.

But if that was the case, what they have failed to do is make a B-movie so wonderfully bad that, by a mysterious process of cinematic transmogrification, it becomes deliciously enjoyable.

No matter how badly the supporting cast overacts, Rampage never quite makes it over this ‘Wow, this is actually so much fun’ barrier. 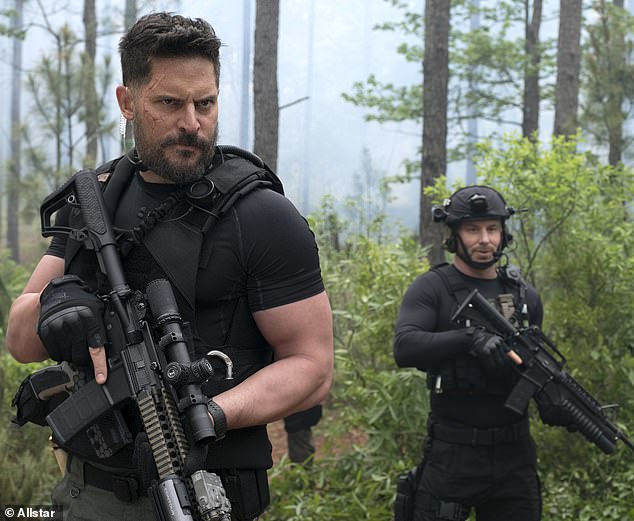 At times it’s pretty obvious that they’ve almost set out deliberately to make a bad film, but no matter how badly the supporting cast overacts, it doesn’t quite reach ‘so bad it’s great’ status

For most of its running time it’s just plain mediocre. At least for anyone over the age of 12.

Describing the plot cannot be done without taking a very deep breath.

And that’s not just so we can believe in the highly improbable character played by Johnson – Davis Okoye, a musclebound San Diego primatologist who has built up a sign-language-based relationship with an albino gorilla called George, and who just happens to have a background in the Special Forces. Which is handy because… 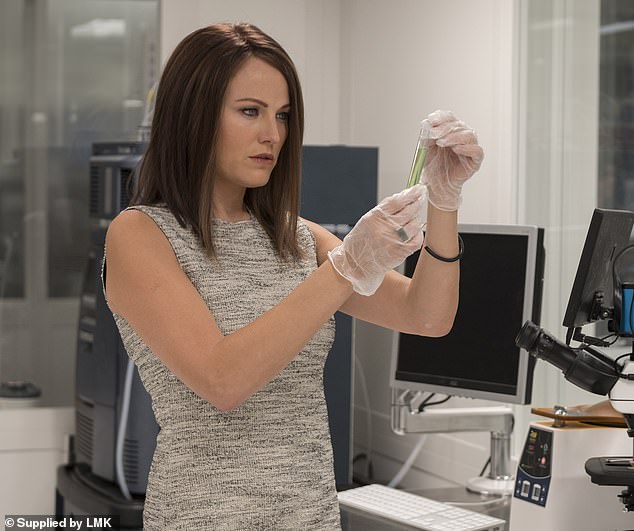 Elsewhere, the sinister Energyne Corporation – run by the unscrupulous but hugely wealthy Wyden siblings (really quite badly played by Malin Akerman and Jake Lacy) – have been experimenting with gene-editing on their privately financed space station.

When that explodes (clearly not a good sign), the only things that survive re-entry are three canisters containing the gene-transforming pathogen – one of which lands in the San Diego gorilla sanctuary, a second in the forests of Wyoming (good wolf country), while the third lands in the Florida Everglades. And we know what lives there.

What does for the film is its sheer inevitability. From the moment we see the stepped silhouette of the Energyne tower, we know that George – by now growing at a rate of two feet every 24 hours – will be climbing up it, King Kong-style, pretty soon. 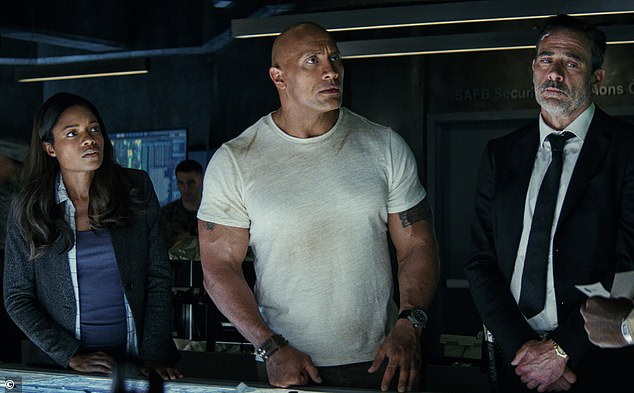 There’s so much other attendant silliness going on here. Jeffrey Dean Morgan’s massively over-the-top performance as the mysterious Agent Russell (above right) is extraordinary

OK, having a giant tusked alligator attempt the same could go down as a surprise but, hey, it’s just another a big reptile in a high-rise city, and that’s very familiar territory for Godzilla fans.

But There’s so much other attendant silliness going on here. Jeffrey Dean Morgan’s massively over-the-top performance as the mysterious Agent Russell is extraordinary.

But then if you’re playing opposite The Rock, I suppose you do need to bring something pretty big. 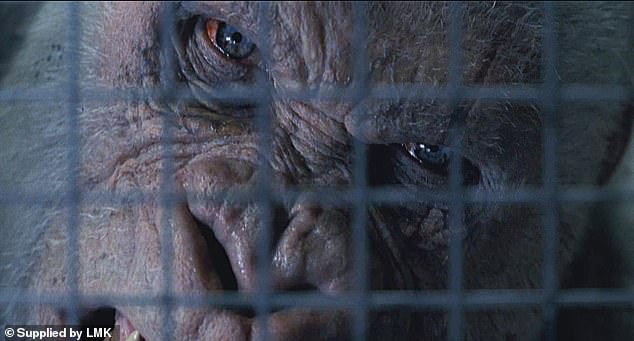 The visual effects so vital to this sort of thing are variable in quality. For director Brad Peyton Rampage is clearly film-making by numbers. Sadly, numbers that just don’t add up for me

Or something just pretty, if we’re talking about Naomie Harris, who pitches up to play the inevitable sidekick, a beautiful geneticist.

For director Brad Peyton this is clearly film-making by numbers. Sadly, numbers that just don’t add up for me.

Inescapable evil has become a familiar horror-film trope in recent years, often producing genuinely scary movies such as The Ring, Final Destination and It Follows.

But sometimes it produces mediocre films like Truth Or Dare – despite it being co-produced by genre ace Jason Blum.

A group of glossy/buffed high-school students head to Mexico for the spring break, get drunk on tequila and end up in a spooky chapel playing truth or dare with a stranger they’ve just met.

It’s not the best idea they’ve had, but worse awaits when they get back home – because the game has come with them.

Every now and then, a passing face contorts into that sinister, smiley look so beloved of horror films, a guttural voice growls ‘Truth or dare?’ and we’re off. No one stands out in a film that ruffles remarkably few feathers. 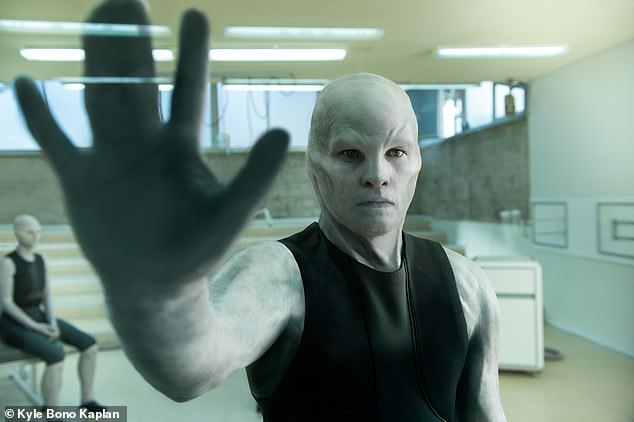 Sam Worthington (above) leads a rather unconvincing cast in The Titan, set in a preapocalyptic 2048. While the first half genuinely intrigues, the Earthbound story falters as things evolve

You, Me And Him is a likeable but inconsistent British romcom with a twist – the will-they-won’t-they couple are lesbian.

Olivia (Lucy Punch) is brisk, broody and pushing 40, while her girlfriend, Alex (Faye Marsay), is messy, free-spirited and likes her intoxicants. As for the ‘him’, that’ll be John (David Tennant), who gets Alex pregnant after a drunken one-night stand.

Which is awkward, as Olivia has just conceived herself using a sperm donor. The female performances are lovely but every time the film gains a little comic momentum, it’s frittered away courtesy of some ill-advised and occasionally toe-curling slapstick.

Set in a preapocalyptic 2048, The Titan posits the familiar idea of an overpopulated Earth running out of resources, but then comes up with a rather more original sci-fi solution.

Instead of heading to the stars and ‘terra-forming’ planets for human occupation, why not modify humans so that they can occupy hostile habitats such as that offered by Saturn’s giant moon, Titan?

With Sam Worthington leading a rather unconvincing cast, the first half genuinely intrigues but the Earthbound story falters as things, er, evolve.