If you peered over your neighbour’s fence to see this flooded plot, complete with ramshackle shed and a large pile of sticks, you might politely offer to help them with the gardening.

But having been presented to the judges at Chelsea Flower Show – for this is indeed an exhibit there – Rewilding Britain’s entry won the top prize.

Designers Lulu Urquhart and Adam Hunt swapped traditional blooms for flowering weeds – and included a dam made of branches nibbled by beavers.

It showed, Mr Hunt explained, how the creatures can channel water and prevent flooding naturally. Clutching his best in show prize, he added: ‘This isn’t a political garden. It comes from the heart.’

The Rewilding Britain charity wants 5 per cent of the country to be returned to an uncultivated state to help tackle climate change.

Rising temperatures in the Arctic were highlighted in John Warland’s entry, with a 15-tonne ice block at its heart.

Speaking of the dam and lodge at the centre of the garden built for the charity Rewilding Britain, Mrs Urquhart added: ‘Every stick has been individually chewed by a beaver.’

Hilary Cross, a spokesman for Rewilding Britain said the charity would like to see ‘5 per cent’ of Britain ‘rewilded’.

‘The enormous benefits include flood prevention and carbon capture (when plants absorb the greenhouse gas carbon dioxide from the air), helping to reduce global warming.’

Other politically engaged gardens include the London Fire Brigade’s garden in Chelsea’s Grand Pavilion which highlights how global warming increases the risk of flooding.

The reminder was a timely one – as torrential rain drenched the Chelsea site in the early afternoon. 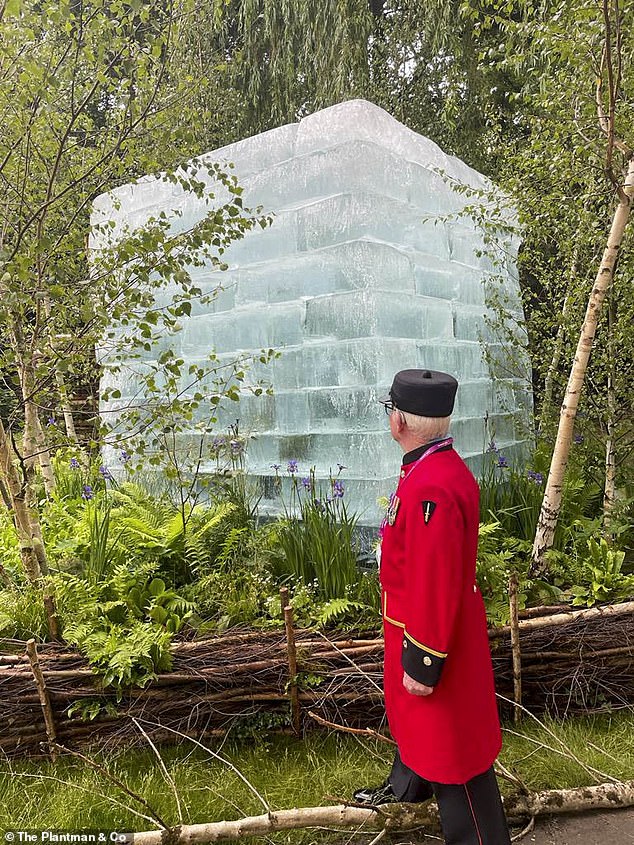 Rising temperatures in the Arctic were highlighted in John Warland’s entry, with a 15-tonne ice block at its heart

David O’Neill, the brigade’s deputy assistant commissioner said: ‘Last year we attended over 7,000 flood related incidents so it is on the increase for us’ up 12 per cent on the previous year.

He said the LFB wanted people to understand paving over gardens increased the risk of urban flooding, as tarmac and concrete surfaces stopped water soaking into the ground.

He said: ‘It’s always been part of our remit to prepare for reasonable risks. It’s not just about climate, it’s about burst water mains too.’

Another garden, Hands Off Mangrove, highlights the 55 day trial of a group of black defendants known as the Mangrove Nine.

The group of seven men and two women were cleared of the main charge of inciting a riot during a protest against heavy handed policing of a restaurant called The Mangrove in Notting Hill, west London.

The charity behind the garden, Grow2Know said: ‘At the centre of the garden sits a four metre tall, deforested Mangrove sculpture with nine deliberately bare roots, each one honouring a Mangrove Nine member and symbolising a stark reminder of the impact humans are having on the planet’s most important ecosystem’.

The garden’s designers said it has ‘a singular path of crushed concrete [which] represents the harsh challenges, threats of racism, poverty and violence of life in Notting Hill in the 1960s and 1970s, many of which are endured by our communities today’.

Tayshan Hayden-Smith of the Mangrove garden said: ‘This is a garden grown from activism both from the beginnings of the Grow2Know which was in response to the Grenfell Tower fire, but also the story of the Mangrove Nine which was the first acknowledgement of racial hatred in the police and judicial system.

‘But it also raises awareness of deforestation of mangrove forests’.

James Alexander Sinclair, RHS Judge, said: ‘RHS Chelsea Flower Show 2022 shows the power that gardens have to address some of the most pressing issues of our time. ‘People relate to gardens and therefore if the garden is gorgeous they will also be excited and interested in the charity that the garden is championing.

‘Charities and good causes are a perfect match with our shows because not only do they promote excellent horticulture but they give so many different organisations the chance to promote themselves.’