Who else but Alfredo Morelos? Just when Rangers needed it most, the Colombian striker delivered his latest precious European strike to avert another night of ignominy at Ibrox.

Morelos has scored against many more formidable opponents than Alashkert during the process of assembling a club record tally of 25 goals in continental competition.

Knocking one in against the Armenian champions wouldn’t normally be noteworthy. But then this wasn’t your normal Europa League evening for Steven Gerrard’s side.

Reduced to ten men by the dismissal of John Lundstram just before half-time, Rangers were suddenly confronted by the unthinkable.

Nine days on from that dismal Champions League exit against Malmo, they could scarcely have hand-picked more amenable opposition for their bid to salvage group stage football from the continent’s second competition. Or at least that’s how it should have been.

Lundstram’s two bookings in the space of ten minutes capped what had been a dire opening period overall. The prospect of taking no lead into next week’s second leg in Yerevan – or perhaps even worse – loomed large.

Replacing the struggling Ryan Kent with Scott Wright was a big call that added much more pep to the ten men. It was still not vintage stuff but Morelos wasn’t found wanting when his 67th minute opportunity arrived.

Lundstram should be the first to offer him thanks. On Wednesday, the summer addition had spoken of the need to ‘step up to plate’ as the Ibrox men sought to put the misery of Malmo behind them. This was a funny way for him to go about it. There was a slackness about both bookings that leaves him with some making up to do.

At least his suspension for the second leg will be offset by the return of Glen Kamara from a three-match ban. The Finn is surely a far more accomplished operator at this level.

As it is, this slender margin means Gerrard will not be able to overly rotate his squad when they undertake the 5,000-mile round trip for the second leg – just three days before Celtic visit for the season’s first Old Firm game. A group stage financial reward worth more than £10 million is simply too important.

Before then, the Ibrox manager will be acutely aware of the need for a better performance when they head north to meet Ross County in the Premiership on Sunday. A spark to ignite their season is still awaited.

Testing opposition in the shape of Ufa, Legia Warsaw and Galatasaray had stood in Rangers’ way over three previous seasons of Europa League play-offs. Alashkert are several rungs below any of those side. The expectation, rightly, was of comfortable progress.

Calvin Bassey was picked ahead of Borna Barisic and didn’t waste much time in making his presence felt. A robust challenge on Aghvan Papikyan near the touchline eventually forced the winger’s substitution.

Bassey showed more creative traits with a terrific cross that sent goalkeeper Ognjen Cancarevic into a panic, but Rangers weren’t clicking. At all.

This was stuttering, hesitant stuff that lacked intensity. After a rousing reception, the volume of frustration being expressed by the crowd steadily increased.

Crossing remained a key element of the gameplan but the quality was variable. Bassey cut back a decent one back into the path of Kent, whose low drive was deflected wide. If there was a degree of misfortune there, the same couldn’t be said when the £7 million man spurned a golden 22nd minute chance.

Alashkert coughed up possession around 30 yards from their own goal. Ianis Hagi took over and slipped the ball right to Kent inside the area.

There was a big target of offer but he failed to hit it. A rising right-foot strike clipped the top of the bar as Cancarevic breathed a large sigh of relief. 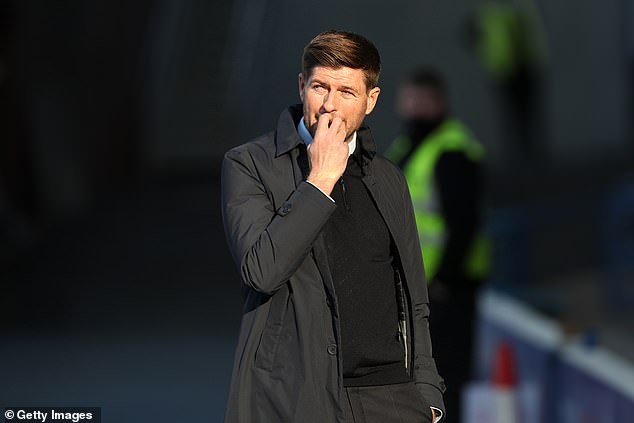 The limits of the visitors were obvious but they still caused the odd moment of concern. One through-ball caught the Rangers backline square and might well have spelled danger had Jose Embalo not stood on the ball.

Scorer of two goals against Kairat, the Portuguese striker then saw a speculative drive blocked behind by Connor Goldson as Ibrox expressed dismay at the Armenians being allowed a comfortable period of possession.

More upset soon followed. Lundstram had been booked on 33 minutes for a lazy foul on David Khurtsidze after the Russian got away from him in midfield. That should have placed him on high alert but the ex-Sheffield United man sinned again two minutes before the break.

This time, he wasn’t aware of Embalo powering through to nick away possession. A little jersey tug sent the striker toppling and prompted Sidiropolous to reach for a second yellow card.

Sympathy from the stands was in short supply for Lundstram. When the half-time whistle sounded – after Bassey had optimistically claimed for a penalty – this place echoed to booing.

It was hardly the ideal circumstance for new signing Juninho Bacuna to be paraded at the break. Warm applause greeted the 24-year-old before supporters returned to fretting about those actually left on the pitch.

Wright at least asked some searching questions of Alashkert following his introduction. One surging run saw him toppled by Cancarevic. Loud claims for a spot-kick followed but Sidiropolous wasn’t swayed.

The Alashkert keeper didn’t convince. He spilled a James Tavernier cross, allowing Morelos to hook at goal. Didier Kadio hooked off the line but there was no reprieve when the visitors botched an offside trap.

Morelos was left in acres of space as he ran onto Tavernier’s forward pass. He took his time, but stuck the ball between Cancarevic’s legs to bring a dose of relief to a difficult night.