Rangers 1-2 Malmo (agg 2-4): Scottish champions OUT of the Champions League

Ibrox was full again. Full of raucous noise that turned to cries of exasperation. Full of bitter disappointment after so much buoyant expectation.

Make no mistake, the scars from this extraordinary evening will take some time to heal. A goal and a man up on the night, Rangers contrived to blow their £30 million Champions League chance in front of a first capacity crowd for 17 months.

It became bewildering viewing for supporters whose commitment, both financial and emotional, never wavered throughout the pandemic.

The title secured last season was supposed to be the foundation stone of a bigger, brighter future. And a pathway towards an elite group stage last graced in 2010.

No-one ever said getting there would be easy. But neither did anyone predict Steven Gerrard’s side would collapse at the first hurdle in quite this dismal manner.

Control of the tie was in their hands after 45 minutes. Put level on aggregate by an Alfredo Morelos goal, they saw Malmo diminished when midfielder Bonke Innocent belied his name by collecting two yellow cards in the closing stages of the first half.

It should have opened the door wide to the play-off round. Instead, Rangers replicated the feeble defending that cost them so dearly in Sweden. In fact, it was worse. Leaking goals in the 53rd and 58th minutes to ten-man opposition – the second which came from a throw-in – was a scarcely believable way for their ambitions in this tournament to come an abrupt end.

Malmo would figure somewhere around the average mark in the big European picture. Rangers have beaten better than them in the Europa League during recent seasons. But the Swedes had the clinical touch, the organisation and the sheer heart to record a result that outstrip even their 2011 defeat of Rangers in this same competition. They were outstanding in the second period.

For Gerrard, though, a third successive defeat brings searching questions about just where their championship-winning form has gone. And why preparation for this tie didn’t work.

One of the primary goals of this campaign has already vanished. Regrouping in the Europa League play-offs against either Kairat Almaty or Alashkert is essential but no-one can pretend that’s what where they wanted to be.

Malmo coach Jon Dahl Tomasson sought to crank up the pressure pre-match by claiming Rangers needed the Champions League money. That may just have been mind-games, but the remaining weeks of the transfer window could yet be interesting if big offers arrive. Transformative income will not be arriving from European football.

The Ibrox side pushed to try and get back into it as the minutes ticked down but it was clear well before the end it wouldn’t happen. Malmo repelled everything that came their way.

Gerrard had spoken of needing one good performance to ‘light the fire’ again. He brought in Morelos and Joe Aribo from the first leg – and made a more eye-catching alteration in defence.

Out went Filip Helander and in came Leon Balogun. The Nigerian did not have a good evening.

The Ibrox outfit wore their new purple third kit ahead of schedule, insisting UEFA rules and ‘the limited options made available’ by Malmo had forced the move.

Previously part of the rotation in season 1994-95, the colours conjured up memories of Brian Laudrup, Richard Gough, Mark Hateley and more.

Mind you, it wasn’t a particularly good omen in European terms. As Laudrup recalled in Sportsmail yesterday, Rangers lost to AEK Athens in that year’s Champions League qualifiers.

There were no lack of initial urgency invested in trying to avoid a re-run. Morelos tried to set the tone after just two minutes. His upper body strength was too much for Lasse Nielsen as they fought for possession near the byeline. The striker’s cross broke back for Aribo and his shot was blocked behind by Anel Ahmedhodzic. 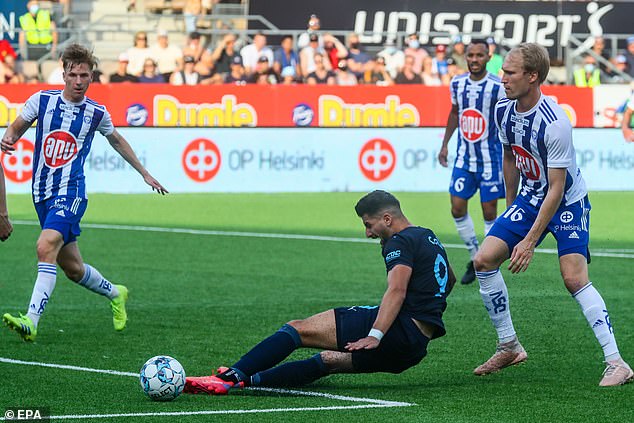 Aribo’s forward runs were giving Rangers additional options. He stretched to try and meet a Borna Barisic as the host continue to turn the screw. You sensed something was coming. It arrived on 18 minutes.

Barisic won a free-kick inside the Malmo half, enabling the ball to be worked left to Kent. His inswinging cross was a peach and Morelos bundled it over the line at the far post.

He went with his head but the final touch may have been off his shoulder or back. No-one cared.

The noise inside Ibrox would have endangered a decibel meter. Bedlam. As if 17 months of waiting, all that pent-up emotion, had burst forth at the sight of the ball in the net.

There is always a danger immediately after such moments. Rangers had to refocus and keep Malmo on the back foot. Initially they did.

Aribo robbed Innocent to let Scott Arfield feed Morelos. He drifted in from the right to get a strike away, but all the pace on it was removed by Nielsen’s block.

Tomasson was irate figure in his technical area, veering between venting at the fourth official and urging more from his players. Malmo badly needed a foothold.

They gained one through an unlikely source. Allan McGregor’s lengthy European record is littered with pristine saves but he misjudged the flight of the ball as he sought to gather ahead of first leg scorer Veljko Birmancevic. Slovenian Referee Slavko Vincic deemed he handled outside his area and produced a yellow card.

The direct free-kick was wasted into the wall, but it did signal a little period of Swedish pressure. Balogun got in a great clearing header to thwart Antonio Colak before the Croatian forward was off target from a Jo Inge Berget cross. Birmancevic then failed to get enough oomph behind an angled effort as the Ibrox defence wobbled.

It seemed as though a release valve had been activated just before half-time when Innocent became guilty. Already booked on 41 minutes for a foul on Morelos, the midfielder went into a challenge against Connor Goldson inside the Rangers half.

The Ibrox centre-back was hurt but it looked a 50-50. A second yellow card seemed harsh. Vincic thought differently. Ibrox roared again as Tomasson looked on aghast.

The Dane had picked the same starting line-up as the first leg but now had a mammoth task on his hands. Gerrard would have spent half-time demanding Rangers made it even tougher.

Morelos smashed too high after Malmo goalkeeper Johan Dahlin got in a mess. A booking for a foul on Anders Christiansen left the Colombian walking a tightrope.

Alarmingly for Gerrard, so were Rangers. Despite the man advantage, they were pegged back to level on the night – and behind on aggregate – in the 53rd minute.

Birmancevic played a lovely reverse pass in behind Balogun and Colak thumped a laser-guided finish into the far corner of the net.

That was bad enough for the Ibrox men but worse followed within five minutes. They were crumbling.

A simple throw-in went straight to Colak, who took a touch away from Balogun before reversing a finish beyond McGregor. It was an astonishing way to concede a dominant position.

Rangers desperately needed a rapid response. Arfield saw a cute header deflected over the top before Morelos was denied by a terrific sliding challenge from Soren Rieks.

Chances came. And substitutes were made. One of those, Fashion Sakala, was denied by a brilliant Dahlin save before Ibrox echoed to boos.