Rangers supporters gave their team a heroes’ welcome to Ibrox on Saturday, as fans appeared in their thousands on the day Steven Gerrard’s side lift the Scottish Premier League trophy.

The Gers will receive their 55th Scottish top-flight title after their match with Aberdeen on Saturday lunchtime, which is the final game of the Premier League season.

Both Rangers Football Club and the Scottish Government asked fans to adhere to social distancing rules on Saturday but fans ignored those pleas when the home side’s team bus arrived at Ibrox. 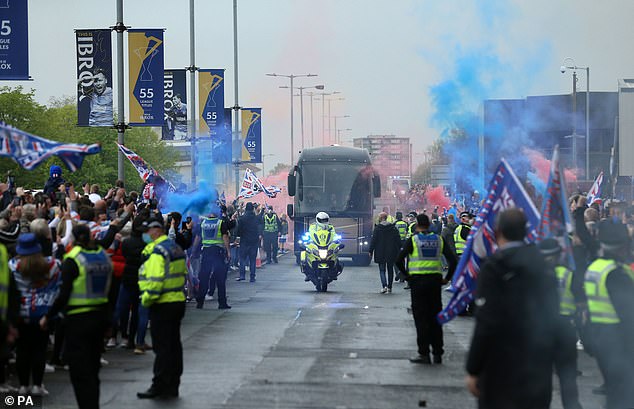 The celebrations come a day after Scottish First Minister Nicola Sturgeon announced that Glasgow would be increasing restrictions into level 2 due to concerns from the Indian coronavirus variant.

Rangers themselves published a statement on Friday, calling for fans to respect the restrictions put in place.

It read: ‘It’s a day to enjoy and to celebrate the achievements of our club, and the title win by Steven Gerrard and his team. However, we are cognisant that the battle against Covid-19 is far from over and that the virus is still live. It hasn’t gone away.

‘Please celebrate this historic day for our club in a safe and sensible manner, respecting public safety – adhering to the current government guidelines and restrictions which are still in place. 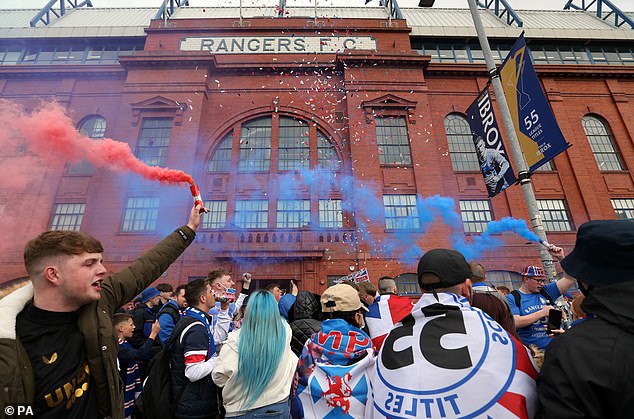 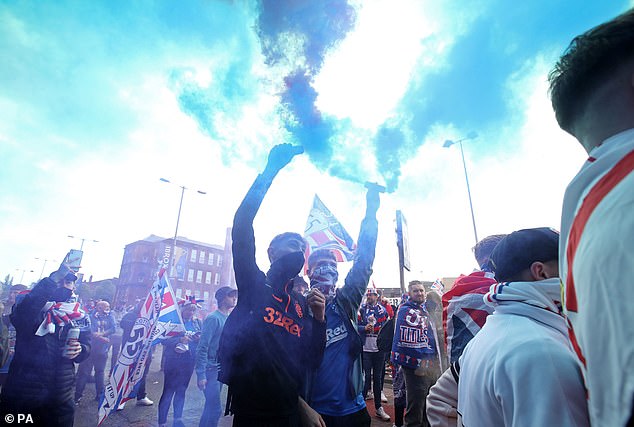 ‘In particular, please be mindful of the government guidelines regarding gathering in large numbers. If possible, please celebrate within your own community.’

Rangers supporters, who are still not allowed inside stadiums due to coronavirus rules, let off flares and sang club chants when the side arrived in the stadium, with stewards in place to keep fans away from the team when they stepped off the bus.

Manager Gerrard was greeted by supporters after leading Rangers to their first league title since 2011 after perennial success by fierce Glasgow rivals Celtic over the past decade.

Earlier this week, the Rangers boss spoke about the bond between the players and the fans. 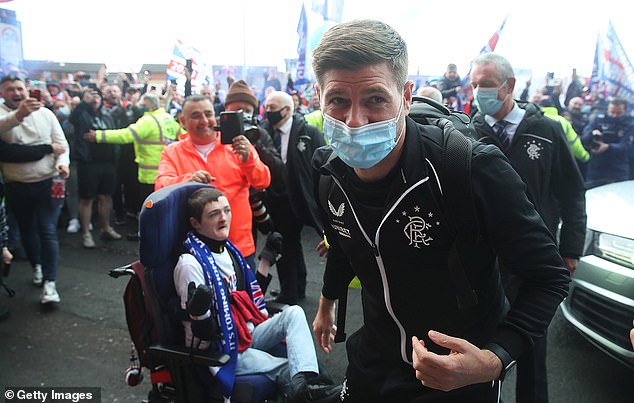 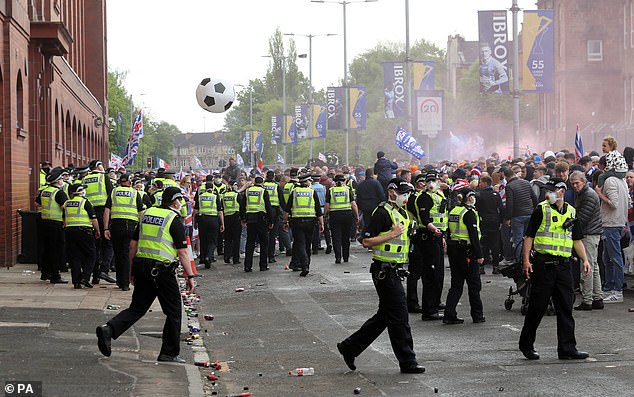 Gerrard told a press conference: ‘The players have seen it with their own eyes, the support that the team have been given.

‘I think there’s been a real understanding from the players and we’ve made it abundantly clear what the fans have had to do to support from afar this year.

‘The players are family men, a lot of them – they understand what the fans have gone through. The players want to share (Saturday) with the supporters, even though they can’t be in the stadium, they want to raise that cup for them because they are the most important people here.’

In winning the Scottish Premier League title, Rangers managed to stop arch-rivals Celtic from winning ten top-flight titles in a row, as well extending their all-time league record to 55, over the Bhoys’ total of 51. 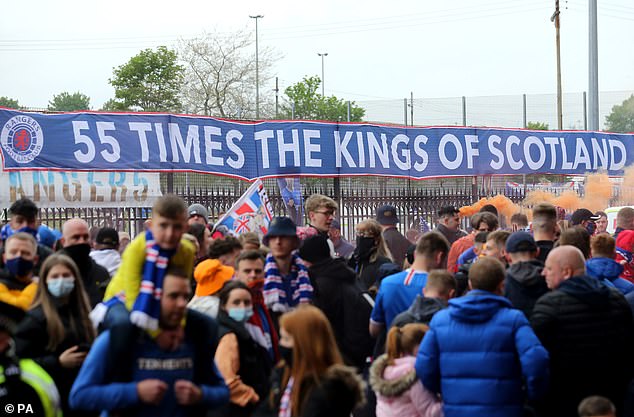 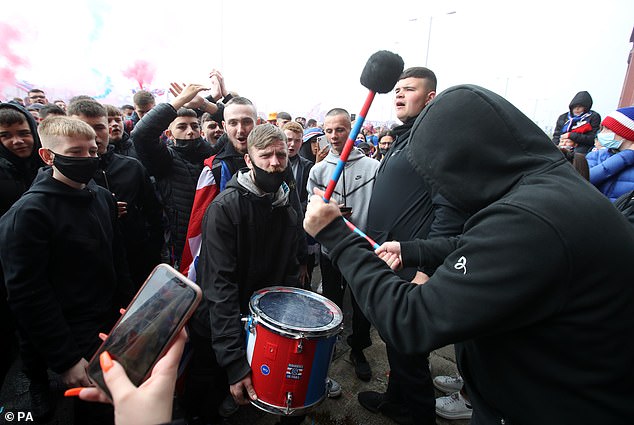 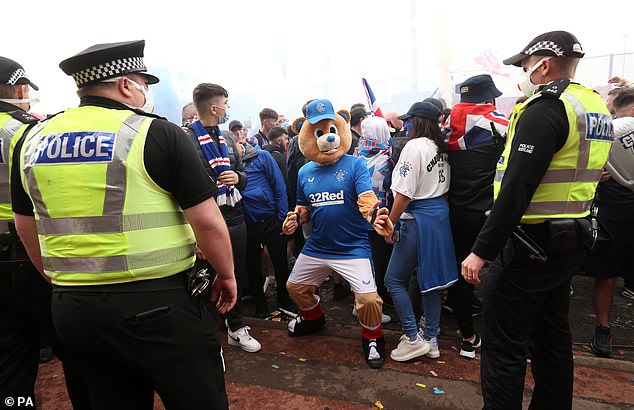 Rangers can amass 102 points if they beat Aberdeen on Saturday lunchtime at 12.30pm 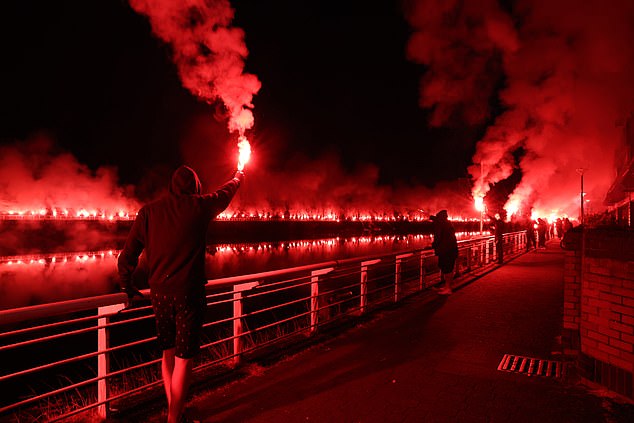 On Friday night, Rangers fans lit up red flares on the banks of the River Clyde at around 9pm

The title was won by Gerrard’s men on March 7 after Celtic drew 0-0 against Dundee United, with Rangers building up a 20-point lead with six games remaining.

The Gers amassed 99 points before Saturday’s clash with Aberdeen and boasted a 23-point lead over Celtic at the Scottish Premier League summit. Gerrard’s side are yet to lose a league match this season, the first time it has been done since Celtic managed it in 2017.

Avoiding defeat against Aberdeen would see Rangers break the 100-point barrier for the first time in the club in their history and only the second time ever, after Brendan Rodgers’ Celtic in their unbeaten campaign.

Rangers are also looking to complete a 100 per cent winning record in league home games, the first time it has been done since Martin O’Neill managed it with Celtic in the early 2000s.

The title celebrations among Rangers supporters continued on Friday night when thousands of fans from the Union Bears supporters group lit up the banks of Glasgow’s River Clyde with red flares.

Police Scotland confirmed that officers were called to the river at around 10.15pm on Friday night but no arrests were made and the group was dispersed shortly afterwards.