There has been a feeling of inevitability about Steven Gerrard’s Rangers departure since long before Aston Villa sacked Dean Smith on Sunday and made their move.

The writing was on the wall after a summer in which the Ibrox club spent a grand total of nothing on new players for the man who had just delivered their first title for 10 years. Just three Bosman free transfers arrived in the shape of Juninho Bacuna, John Lundstram and Fashion Sakala.

As a result, Gerrard has cut a moody figure since the start of the season, with his team’s below-par displays mirroring that. The first time he openly voiced his concerns was after consecutive Europa League defeats by Lyon and Sparta Prague at the start of October.

‘If we want to keep growing and go to the extra level we need to spend big money in the transfer windows. It is as simple as that,’ he said. ‘To compete with the teams we are playing against, we have to spend big money. In the last two windows we haven’t spent a penny.’

So Gerrard was always likely to jump ship as soon as the right Premier League project came along this season – Newcastle’s represented too much of a risk but Villa’s fits perfectly – and a gushing statement from Rangers and the reaction of their fans when the move was confirmed suggests they all knew it too.

The statement proudly read: ‘Gerrard moves to the Midlands club having played a key role in the significant growth of the Light Blues in numerous areas during his three-and-a-half years at Ibrox.’

Adding to the feeling that Gerrard had gone as far as he could with Rangers, sporting director Ross Wilson added: ‘Personally, I am proud of the work that we have done together along with all of the players and staff, and I know Steven shares that pride. We wish Steven nothing but success for his next chapter.’

Over on the Bear Pit forum, the overriding feeling was of a desire to move on, alongside many messages of thanks for their recent title win.

And JW1988 wrote: ‘Finally. We move on. Good luck to Gerrard in his future endeavours. Over time the feeling of ill will should most likely dissipate, especially should we go on to secure the league title again. Get it right Rangers. This team we have are capable of so much more than we’ve seen this season.’

Albertz85 posted: ‘Thanks for 55 and he really did restore our name on the European stage. Onwards we go. I look forward to seeing who replaces him.’

Chablue1 posted: ‘Move on, we have lost better managers than Gerrard, a new focus was required, we might actually improve on the park now.’ 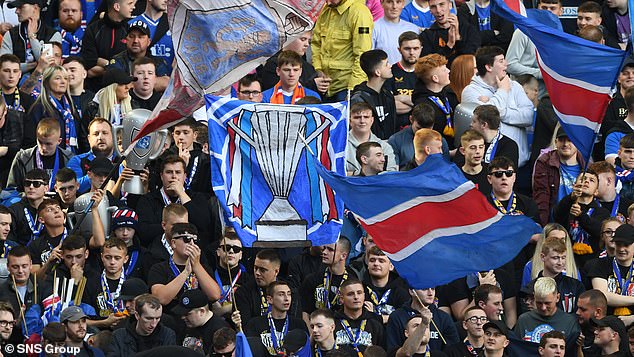 Celtic legend John Hartson was unequivocal in his verdict on Gerrard’s move. He said: ‘People down south are saying that Aston Villa is a bigger club than Rangers… Rangers would fit Aston Villa in their back pocket. No disrespect. Aston Villa have won a European Cup, but Rangers and Celtic are massive clubs.’ And there was some bitterness aimed towards Gerrard and Villa in line with that sentiment.

StuGers wrote: ‘I wouldn’t have stood in his way, but the timing is atrocious and the fact it is to such a s*** club like Villa really does stick in my throat a bit.’

The timing of Gerrard’s departure, with just a third of the season gone, Celtic only four points behind and Europa League progress still a possibility, is a clear point of grievance for some Rangers fans – and draws parallels with Brendan Rodgers’ departure from Celtic in February 2019.

Bouncebackability wrote: ‘Absolutely fine – if it was at the end of the this season.’

The bearman posted: ‘Was always going to leave but the timing (maybe never a good time) just doesn’t sit right. All the best, and thanks for 55! The memories of last year will be with us forever.’ 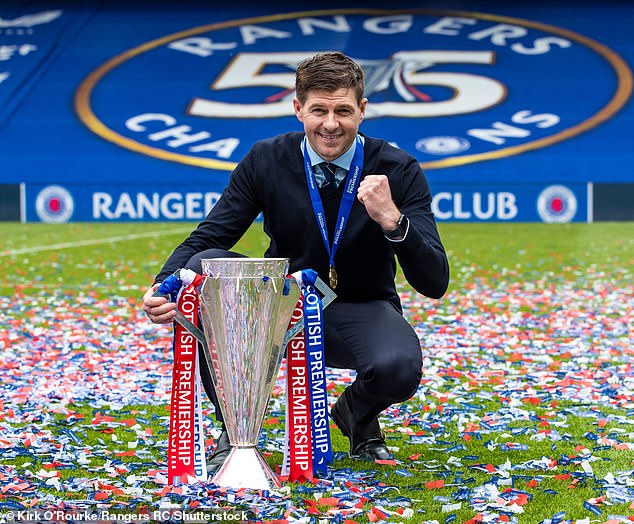 Over on the Rangers media forum, tm91 was a little more forthright: ‘Right then. Gerrard is ancient history and another finished chapter. He’s a snake but ultimately he’s just one manager who wasn’t the guy he said he was. It happens. Rangers keep going. Thanks for 55. Time for Gio.’

Gio, of course, is odds-on favourite the Rangers job and former Ibrox star Giovanni van Bronckhorst, who would cost nothing after leaving Guangzhuo City last year. He has four years’ experience of managing Feyenoord on his c.v., which included winning the Dutch title in 2017, so he has a decent pedigree. Winning two titles with Rangers as a player will also give him a headstart with the fanbase, players and staff.

But back to Gerrard, and that sense of inevitability about his departure. While Hartson is right, Rangers and Celtic are huge clubs with enormous fanbases, the reality of their modern day teams is that they just do not have the money to compete with even the smallest Premier League clubs – and this has only been accentuated by Covid.

Rangers recorded losses of £23.5m and £15.9m in the last two seasons, so while Gerrard may feel aggrieved that his board stopped backing him in the year he finally delivered them glory, they simply could not afford to continue spending at the rate they had over his first three seasons – which, incidentally, saw around £40m forked out on players and no trophies won other than that elusive 55th title. 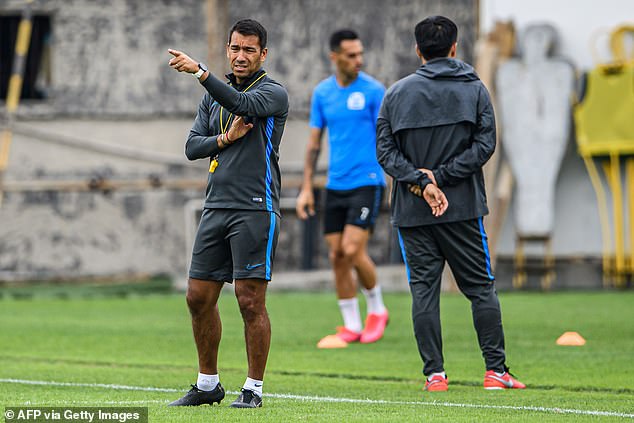 Celtic found themselves in the same scenario when Rodgers left for Leicester, who are a far smaller than Villa in terms of fanbase and history but are well-financed by their Thai owners. Gerrard, like Rodgers before him, wanted to challenge for European trophies while managing in Glasgow and, rightly or wrongly, put his failure to do so down to a lack of transfer funds over anything else.

So the door is ajar for Celtic to try and stop what looked as recently as few months ago like being the beginning of an era of Rangers dominance. Ange Postecoglou’s side are just clicking into gear after a slow start to the season and will welcome any unrest at Ibrox.

In truth though, there has been unrest at Ibrox for a while with Gerrard clearly unhappy, so the hope for Rangers fans is that the swift appoint of Van Bronckhorst – who appears to have pipped other candidates Russell Martin and Derek McInnes – will not only prevent a downturn in form, but actually see performances improve after a stodgy start to the season.

Gerrard will rightly be remembered as the man who stopped Celtic winning 10 in a row, but it is time for Rangers to move on.