Rangers will not be subject to UEFA disciplinary hearings following the playing of the national anthem before their Champions League game at Ibrox on Wednesday night.

Following the death of Queen Elizabeth II, Manchester City, Chelsea and Rangers made pleas to UEFA to play God Save The King at their home matches this week as the UK is still in a period of mourning.

But Sportsmail exclusively revealed that the governing body refused ‘on the basis of maintaining a consistent pre-match ceremony with a subdued atmosphere and without any celebratory activities across all UK venues to show respect’.

Nonetheless, the Scottish club defied the decision as the anthem was played through speakers at Ibrox before kick-off in their fixture against Napoli.

A vast silhouette of the Queen amid the colours of the Union Jack could be seen behind one of the goals, while the crowd also participated in a minute’s silence in remembrance of Her Majesty.

Rangers went on to lose the game 3-0, conceding three second half goals against their Italian opponents.

Gers legend Ally McCoist claimed it would be ’embarrassing’ if UEFA decided to punish the club for playing the anthem.

Rangers will not be punished by UEFA after playing the national anthem before kick-off against Napoli at Ibrox on Wednesday night.

‘If that’s breaking the rules, I would actively encourage it,’ McCoist said on talkSPORT. ‘It was fantastic.

‘It wasn’t even good, it wasn’t even brilliant, what a show of unity for the country – it was amazing. The Rangers supporters, a group of lads called the Union Bears, put on a Union Jack.

‘I’ve got to say, the Napoli players were fantastic round the centre circle and the national anthem was sung by everybody in the stadium. It was actually heart-warming, honestly, to see all the unity from supporters and players alike.

‘I don’t know if there’s going to be any action taken. How would I find it? I would find it a little bit embarrassing if UEFA punished a team for singing their national anthem. 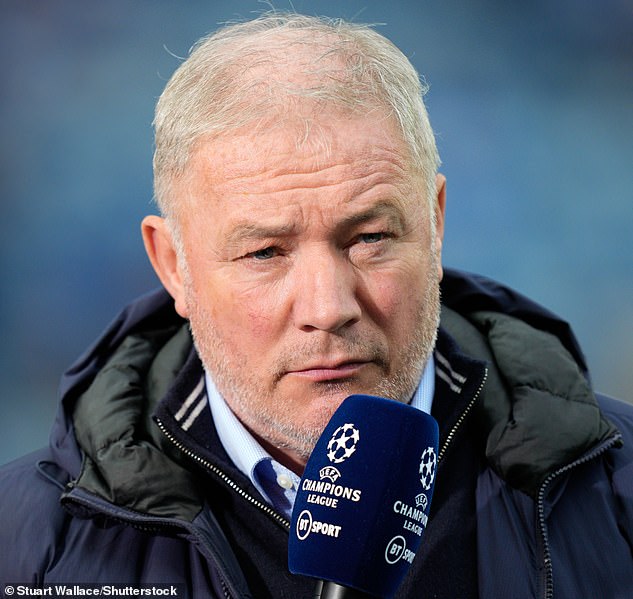 ‘You’d have to say, as well, if that’s not special circumstances, I don’t know what is. Maybe UEFA have misread the audience to a certain degree.

‘On an occasion like that, you’re maybe better saying ‘of course’ and, to a certain degree, let the club do what they want to do. I mean, they’ve sang the national anthem four or five days after the loss of the monarch who reigned for 70 years.

‘I certainly don’t have a problem with it. It was a privilege to be there, honestly. It was fantastic. It was a great show of unity for people who wanted to pay their respects to the Queen and those who wanted to show support to the new King.’

The supporters of Rangers’ Old Firm rivals Celtic adopted a very different tone for their 1-1 draw with Shakhtar Donetsk in Poland.

Both sets of players wore black armbands but the off the pitch some visiting fans made their anti-monarchy views known.

‘A banner in the Celtic end stated ‘F*** the Crown’ while another one said ‘Sorry for your loss Michael Fagan’, a reference to the intruder who broke into the Queen’s Buckingham Palace bedroom in 1982.