Raphael Varane insists he’s ‘very happy’ with the start he’s made to life at Manchester United despite their mixed results.

The defender has made seven appearances in the Premier League and Champions League since being signed for £42million from Real Madrid.

United have won four games, lost to Young Boys and Aston Villa and were held by Everton on Saturday before the international break.

Raphael Varane has made seven appearances for Manchester United this season

The France defender is currently preparing for the UEFA Nations League finals.

And he was asked about his start at Old Trafford.

According to L’Equipe, Varane said: ‘I’m very happy with the start of this adventure. The Premier League is a league known for its intensity. 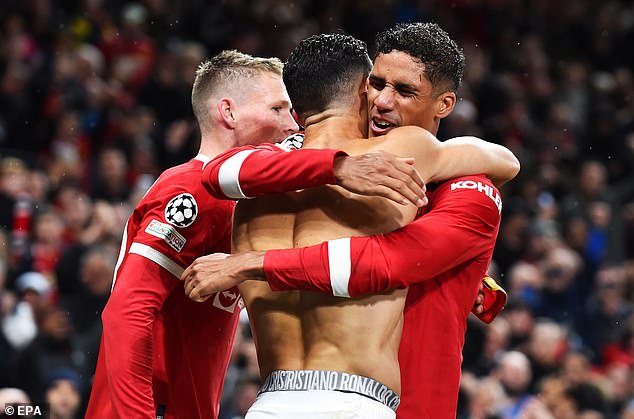 Varane celebrates with Cristiano Ronaldo after his late winner against Villarreal

‘I’m taking pleasure in playing, going out of my comfort zone, finding new bearing with my teammates.

‘It’s a different way of defending and it’s super interesting for me’.

France face Belgium in the semi-finals in Turin on Thursday, while Italy take on Spain in Milan on Wednesday.