Some 146,000 Americans are tested for the coronavirus everyday, but the current process can take several days or even weeks to get results.

Now, a team at Michigan State University has developed a test that produces an answer in just five to seven minutes and allows staff to analyze 22 samples at once.

Unlike the current process, the new test does not require an invasive nasal swab, but instead pulls a sample by swabbing the mouth – making the collection process faster and less uncomfortable.

Researchers still have ‘many regulatory hoops to jump through, but are hopeful the test could be approved by the FDA in a matter of weeks.’

A team at Michigan State University has developed a coronavirus test that produces an answer in just five to seven minutes and allows staff to analyze 22 samples at once. The procedure uses a real-time polymerase chain reaction machine, which produces results in just minutes

The Centers for Disease Control and Prevention (CDC) announced the approval for the RT-PCR test in February for patients who meet specific criteria for coronavirus testing.

This test requires the use of a long swab that enters the nose in order to collect a sample from the uppermost part of the throat.

Although this is the standard testing, it takes just five minutes to complete, then the sample has to be transported to a lab and may sit until staff is able to get through the line of other tests.

However, the test from Michigan State University’s College of Osteopathic Medicine could change that, Lansing State Journal reported. 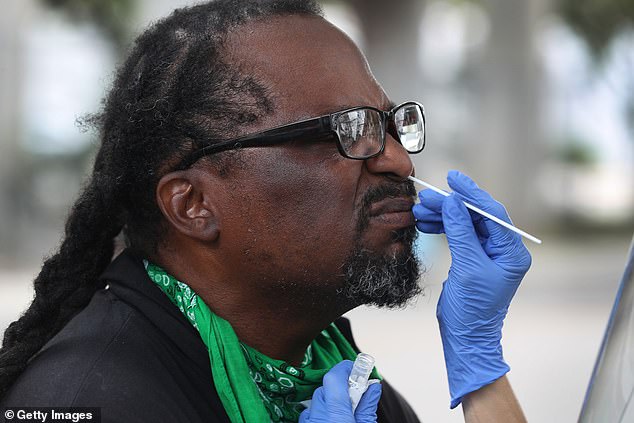 Developed by Brett Etchebarne, an emergency medicine physician and assistant professor at the university has created the new test with the sole purpose of helping emergency room doctors test numerous patients in a short time.

Etchebarne’s test can deliver results in five to seven minutes with the possibility of running higher numbers of tests at once – he said 22 samples can be tested at a time.

And because the new process does not require healthcare workers to use a nose swab, the time it takes to collect a sample is shortened.

The test can be completed by using a real-time polymerase chain reaction machine, which produces results in just minutes. 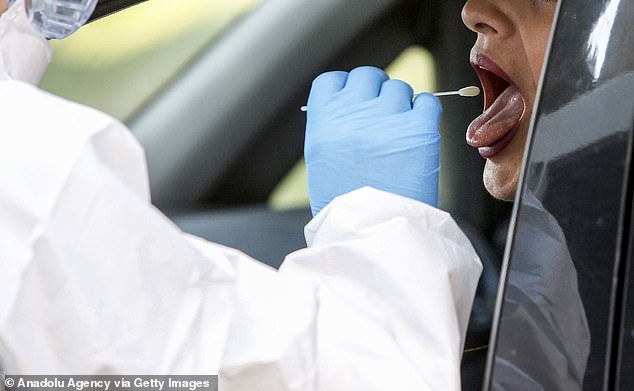 Because the new process does not require healthcare workers to use a nose swab, the time it takes to collect a sample is shortened

However, another method requires heating up the sample and using a color change process that helps identify the virus in even low levels – this process takes up to 30 minutes

‘I used what the CDC provided and made up my own primer sets, which are fragments of the target DNA or RNA that you can use to amplify a region of that genetic element,’ Etchebarne said.

From there, determining the test result is simple. ‘It’s either there, or it’s not there,’ he added.

At the moment, the timeline for when Etchebarne’s test will be available is uncertain.

The next step is to get it validated in a Clinical Laboratory Improvement Amendments lab, a process which is currently underway.

Then, the test needs to be submitted to the FDA for approval.

Etchebarne said that while there are many regulatory hoops to jump through, approval could happen in a matter of weeks, so he’s hopeful.

‘We already know what to do, because we’ve been working on this kind of testing for a long time,’ he said.

Infected people can spread a contagion to others via direct or indirect exposure.

An outbreak will continue to expand if the average number of people infected by each carrier is greater than one.

Prohibiting group gatherings, closing borders, advising people keep 1.5 metres apart, and confining people to their homes has been shown to halt the spread of coronavirus.

In this method the public does not gain immunity in large numbers and the virus could re-surge dramatically if controls are lifted.

People who recover from COVID-19 develop antibodies and immunity.

As the virus spreads through the population and more people develop immunity there are less people the virus can infect.

If enough people have immunity the outbreak will die away.

It is estimated about 30 per cent of people who catch the virus will not show symptoms and for many more the symptoms will not be serious.

This method produces a spike in infections which can overwhelm the healthcare system resulting in large numbers of fatalities.

A COVID-19 vaccine would be the safest and most effective way of controlling the outbreak.

There are several vaccines currently in development though they need to be tested which can take many months.

If a vaccine is rushed without proper testing there may be side-effects and complications.