An alleged child rapist who fell asleep for a whole year on the day of his arrest due to a bizarre medical syndrome has woken up in hospital and been sent immediately to jail.

Ahmad Ali, 28, was arrested at Fiumicino airport near Rome, Italy, in July 2021 after the sex attack on a minor.

The only time he spoke after his arrest was to immediately profess his innocence but then he stopped eating and drinking and soon fell asleep and did not respond to any noises or movements, and was fed via a drip.

The attacker was wheeled in on a gurney to a video conference room at the Regina Coeli prison in Rome for every stage of his criminal proceedings but he never awoke or answered a question.

The attacker was wheeled in on a gurney to a video conference room at the Regina Coeli prison (pictured, file image) in Rome for every stage of his criminal proceedings

Judges had ruled that Ali, who is originally from Pakistan, was able to appear in court despite his apparent unconscious state because they believed he was lying, even as he was ferried between prison and hospital.

But he never woke up during his multiple hearings which his attorney argued he was not fit to attend.

All of a sudden, Ali woke up in hospital on December 9 after a year of being asleep and was immediately sent to prison.

His attorney Donato Vertone told Repubblica: ‘Ahmed woke up and it seems to me a miracle.’

‘Credit to the Cardarelli doctors in Naples. Don’t ask me how they did it, I only know that yesterday he was talking and walking but twenty days ago, due to the conditions in which I had seen him, I thought he would die.’

Ali says he hardly remembers anything from his year of sleep, with his mind blank from his arrest at Fiumicino airport and a few glimpses of his time in Pertini hospital in Rome before he finally awoke in Naples with a needle in his arm and his groin. 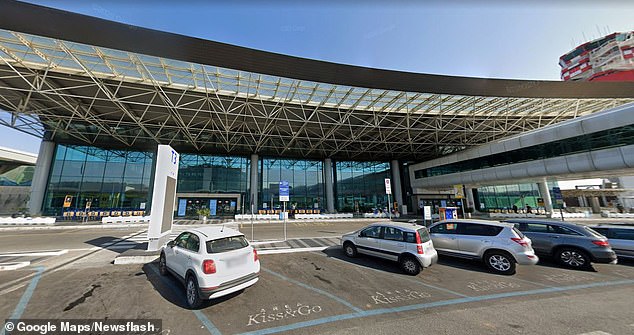 Ahmad Ali, 28, was arrested at Fiumicino airport near Rome (pictured), Italy, in July 2021 after the sex attack on a minor

Ganser syndrome, also known as ‘prison psychosis’ because it usually affects inmates to win leniency from judges and prosecutors, is a controversial disorder with doubts over its legitimacy.

Sufferers appear to mimic physical or mental illnesses when this may benefit them, but then they can actually experience genuine symptoms.

The syndrome is a response to extreme stress and common symptoms include hallucinations, confusion, amnesia and paralysis.

Neuroscience researchers at University College London looked into Ali’s case after it was brought to their attention by Italian justice organisation Antigone.

Susanna Marietti, national coordinator of the group, said: ‘I met young Ahmed last June 1 in the clinical centre of Regina Coeli prison, he was asleep and had been in that state for several months.

‘I bent over his face, I screamed at him and he didn’t move in the slightest, he was in a state of deep sleep.

‘I spoke to the cellmate and he told me that he had never woken up, nor had he ever moved, neither during the day nor at night.’

UCL then advised a psychologist, psychiatrist and physiotherapist work on Ali in tandem for his motor rehabilitation, and soon after he awoke.

Lawyer Vertone said: ‘I know they will continue to study his case.

‘Now I’m trying to get him back in touch with his family in Pakistan because he hasn’t heard from them for more than a year.’

The next hearing will now be held in January where hopefully Ali will be able to address the court for the first time.