Rapper King Krus’s YouTube boasts of supplying crack, heroin and cannabis before he was jailed

A rapper jailed for ‘county lines’ drug dealing had brazenly bragged about his antics in YouTube videos.

Reuben Rose, who sings under the name King Krus, was jailed for eight years for supplying crack, heroin and cannabis across Wiltshire and Essex.

After his conviction it emerged Rose had openly boasted about his crimes on YouTube.

Rapper Reuben Rose, who rapped under the name King Krus, brazenly boasted on YouTube of supplying crack, heroin and cannabis. He was jailed for eight years for supplying the drug across Wiltshire and Essex

In one track ‘On My Mind’, which has more than 15,000 views, he raps: ‘Building up new trap lines, Gotta get them stacks in, Five lines at one time, What you know about trap king?

‘No whip [car], no driver? I’ll hop the train, nothing stops this pay.’ 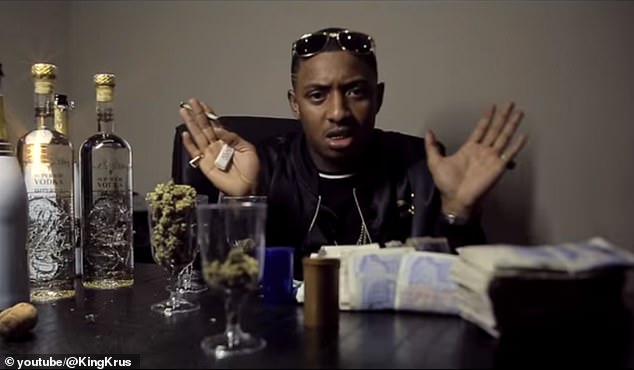 In one video, Oh My Gawd (above), Rose is filmed sitting at a table with two £249 bottles of Royal Dragon vodka, cups full of cannabis and wads of cash while smoking a joint

The glossy video, which opens with Rose popping open a bottle of Lanson champagne, shows him smoking joints and using weighing scales.

The lyrics, some of which attributed to fellow rapper Sean Murdz who features on the track, continue: ‘Smoke hella weed this a lemon pack, Drop 28/27 back.

‘The personnel kings in the trap, And now their phones aren’t ringing fam, You think I give a damn? They never when I never had a cat I could give a gram.

‘Now I’m moving box like you getting spam, You can’t walk with me Lieutenant Dan

Forrest Gump you should have never ran, Fat ting in the car like a wedding plan. 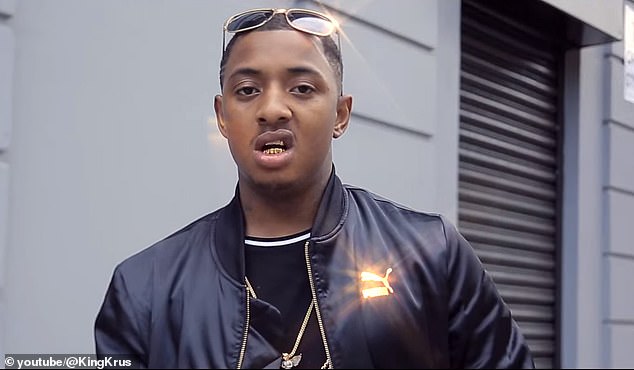 Reuben Rose  in the same video walking down a street holding a joint. Rose first came to the attention of Wiltshire police in July 2015 when he was suspected of driving around the area delivering drugs to users

‘Money, money on my mind, I’ve been out there trapping all my life.

County lines sees dealers in big cities being contacted via mobile phone – then using youngsters to deliver the drugs to outlying areas.

In another video, titled Oh My Gawd, Rose is filmed sitting at a table with two £249 bottles of Royal Dragon vodka, cups full of cannabis and wads of cash while smoking a joint

He raps: ‘I got a runner that be smashing out them hard tax.’

Rose was jailed in December 2018 at Swindon Crown Court following a three-year investigation by Wiltshire Police.

He first came to the force’s attention in July 2015 when he was suspected of driving around the area delivering drugs to users.

Police stopped him several times during the summer after intelligence from the public showed he was travelling to Swindon on almost a daily basis.

He was found to have phones suspected of being linked to drug deals along with a large amount of cash.

Police later identified an address he was using in London and executed a drug warrant, seizing almost seven-and-a-half ounces of crack cocaine and heroin and four ounces of cannabis with a total estimated street value of £20,000.

They also seized a live firearm.

While on bail Rose was stopped in Essex found in possession of approximately 60 street deals of crack cocaine and heroin – and a phone suspected to be involved in drug supply. 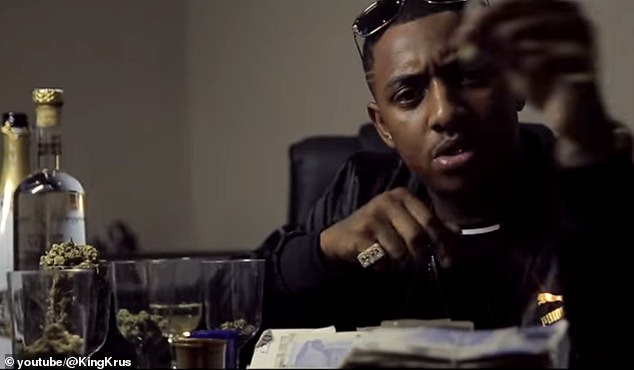 Police later identified an address he was using in London and executed a drug warrant, seizing almost seven-and-a-half ounces of crack cocaine and heroin and four ounces of cannabis with a total estimated street value of £20,000

He pleaded not guilty to this offence but was later found guilty at crown court.

In the video for another of his songs, Studio or Road, which has almost 10,000 views, Rose is seen answering a cheap trap-line phone as he drives a convertible BMW.

He raps: ‘It’s either the studio or the trap house, but both of them feel like home’.

He is suspected of conspiring to supply heroin and crack cocaine in Swindon.

Williams remains on the run after fleeing to Dubai.

In one of his most recent songs, No Complaints, Williams offers what appears to be a direct message to UK police: ‘No face, no case.’

One commenter writes ‘Mans on the run been chilling In Dubai for time’. Another writes: ‘He must be bare rich to be on the run in Dubai for months.*’

Another county lines dealer, Connor McGovern, 26, was jailed for four years and ten months in July 2018 after rapping about his network on Youtube.

McGovern, who raps under the name Wishwoodz, sang: ‘Cause I be rolling around yeah I be up and down of that strip. I got a Swindon line I got a Bournemouth line, chillin’ up in my crib.’

Youngsters from Swindon have been found peddling class As for London county lines gangs.

Det Insp Franklin said: ‘Rather than just banning the videos, we should be a bit smarter.

‘Only education will get through to some of these kids that this isn’t the way to go.’ 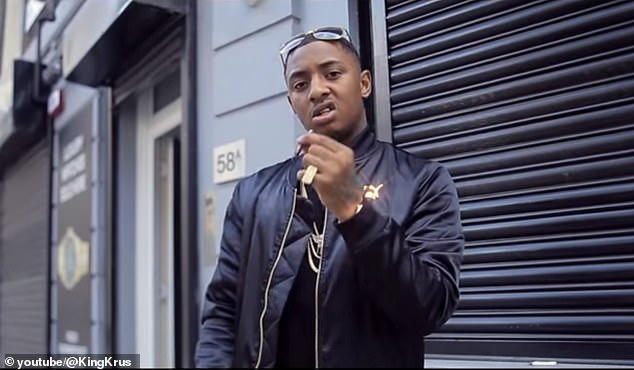 While on bail Rose was stopped in Essex found in possession of approximately 60 street deals of crack cocaine and heroin – and a phone suspected to be involved in drug supply. He pleaded not guilty but was later found guilty at Swindon Crown Court

Angus Macpherson, Wiltshire’s police and crime commissioner, said: ‘Videos like these are classed as musical entertainment for young people but they are also obviously a blatant promotion for knife and drug crime and some youngsters are influenced by the glamour portrayed in these songs.

‘However, the videos are a symptom not the cause of the likes of county lines and serious violent crime.

‘The reasons why young people, in particular, choose to follow this are complex and varied and trying to stop it also requires a whole host of work with a number of agencies – not just the police – to tackle this problem.’