But women’s groups have lashed out at the singer, claiming he is normalising domestic violence with a range of aggressive lyrics detailing gender-based brutality.

Lyrics to other songs include, ‘Here it comes, the uterus punch’, and ‘Dinner’s on the table at six, I’m going out, you’re staying with the kids, and that’s it’.

Lisa Lawrence from the National Council of Women New Zealand told Stuff it was difficult for her to understand how Wife Beater thought the content was acceptable, claiming one-in-three women report physical abuse at the hands of a partner.

‘We do not see anything remotely humorous in these statistics and think that it is deeply offensive.’

But Wife Beater, who did not want to be identified by his real name, hit back claiming his work was ‘dark-humoured satire’ written to provoke in a ‘very sensitive world’.

‘I’d be lying if I didn’t say I wanted a bit of a chaos … I think I’ve done a pretty good job at making people aware domestic violence is still something to be aware about,’ he explained. 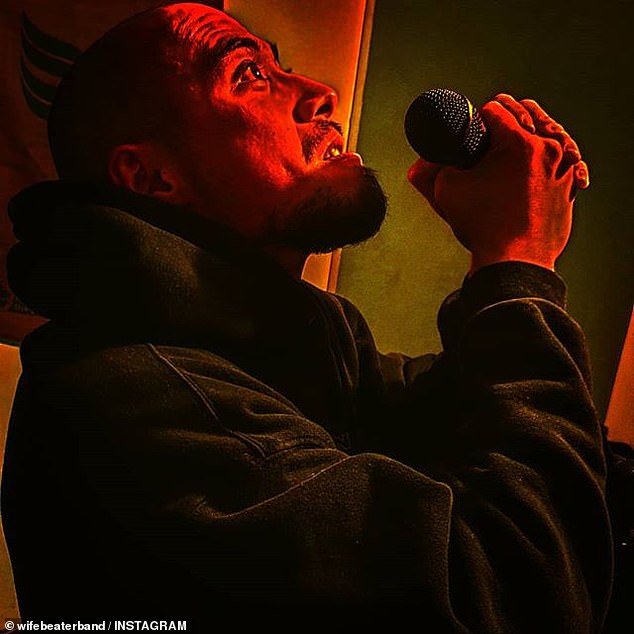 ‘The way the album is presented and the absolutely ridiculous lyrics and song titles would lend itself to people catching on pretty quickly it’s satire.’

But Robb McCann from White Ribbon New Zealand disagreed and said the music works to help ensure the idea that violence against women is acceptable.

He also said the musician was supporting views that promote the idea that men have to be tough, emotionless breadwinners.