While some Toronto Raptors fans could be heard cheering when Golden State Warriors star Kevin Durant went down with an Achilles injury in Game 5 of the NBA Finals on Monday night, one citizen from the famously polite country decided to send flowers instead.

According to NBC Sports, an anonymous Raptors fan sent a floral arrangement to the Warriors offices in downtown Oakland to apologize ‘on behalf of Canada.’

The basket contained an assortment of carnations and a ribbon reading, ‘Canada is sorry KD.’

‘Dear KD and the Warriors: I can’t even believe those dumba** Raptors fans cheered when they saw you were injured,’ the card read, according to NBC Sports. ‘I was watching the game and felt horrible. It was a total disgrace. I hereby apologize on behalf of Canada. Prayers for recovery.’

Kevin Durant went down with an Achilles injury in Game 5 of the NBA Finals on Monday night. Some fans could be heard cheering over the injury, which made Warriors players irate 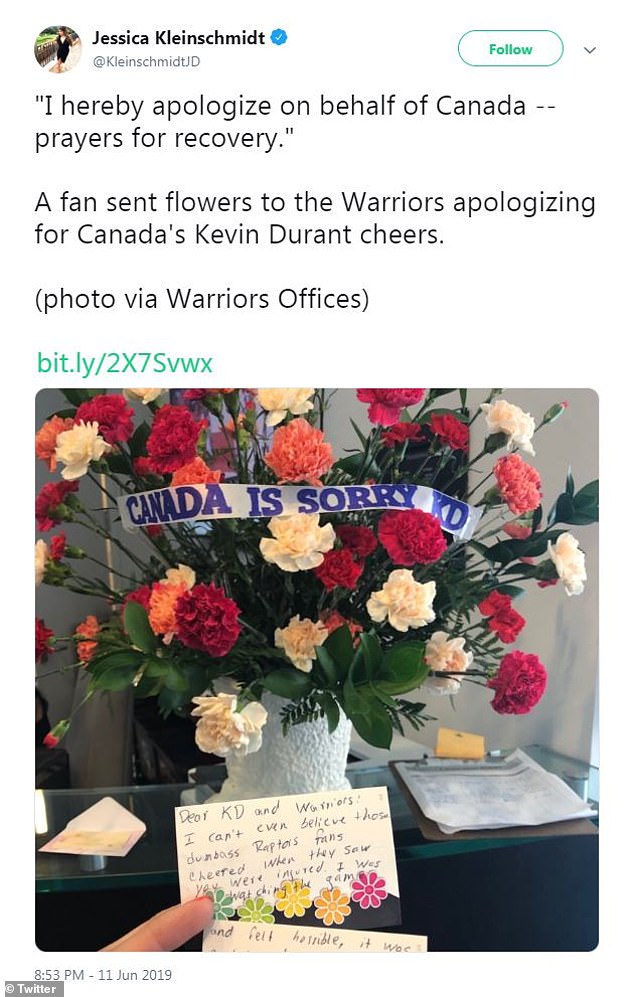 While some Toronto Raptors fans could be heard cheering when Golden State Warriors star Kevin Durant went down with an Achilles injury in Game 5 of the NBA Finals on Monday night, one citizen from the famously polite country decided to send flowers instead

Although the Warriors miraculously won Game 5, staving off elimination and forcing a Game 6 in Oakland on Thursday, the reaction to Durant’s injury left Golden State players incensed.

‘It was bulls***,’ Warriors guard Klay Thompson said. ‘That was freaking ridiculous. I can’t even put into words how mad I was about that.’

Raptors players Kyle Lowry, Serge Ibaka and Pascal Siakam tried to hush fans who were cheering at the sight of an injured Durant.

Durant was making his return from the calf injury he suffered during the Western Conference Finals on May 8, and although he was cleared to return by team doctors, the Warriors still faced criticism for putting him on the court.

‘I blame the Warriors for KD getting hurt and I don’t care what they say about it,’ NBA Hall of Famer Charles Barkley told ESPN, which is reporting that the injury is a torn Achilles.

Warriors general manager Bob Myers anticipated this criticism in the early hours of Tuesday morning while addressing reporters in Toronto.

‘He was cleared to play tonight; that was a collaborative decision,’ Myers said. ‘I don’t believe there’s anybody to blame, but I understand in this world and if you have to, you can blame me. I run our basketball operations department.’

Myers also made it clear that Durant wanted to return, in spite of the fact that he was expected to opt out of his current contract and any potential injury risk could affect his market value this summer. 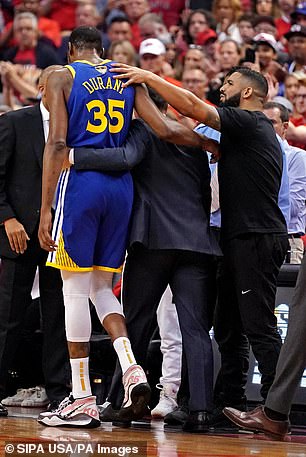 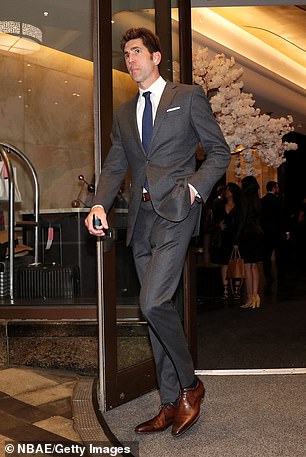 ‘And to tell you something about Kevin Durant, Kevin Durant loves to play basketball, and the people that questioned whether he wanted to get back to this team were wrong,’ Myers said.

There was plenty of grief to go around in the wake Golden State’s miraculous but costly Game 5 win.

In addition to Myers, who was on the verge of tears during his press conference, New Yorkers lamented the loss of the Knicks and Brooklyn Nets’ top-free agent target.

Both teams were expected to pursue the 30-year-old Durant in free agency this summer, according to multiple reports, but now he could feasibly opt in to the final year of his contract with Golden State to stay with the Warriors next season and become a free agent in the summer of 2020.

Prior to the injury, Durant was expected to command well over $30 million a season on a new deal. 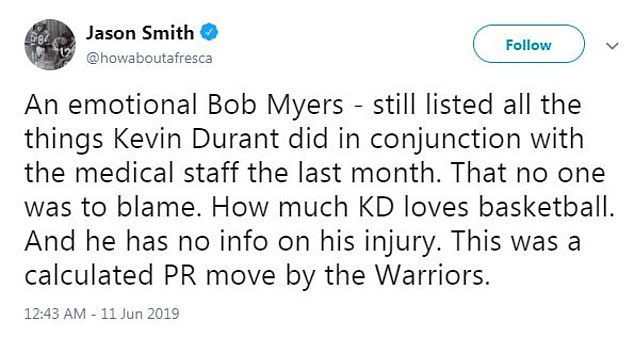 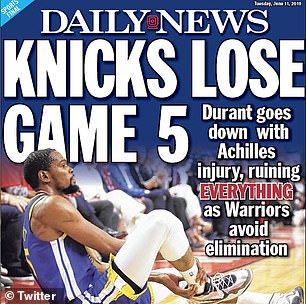 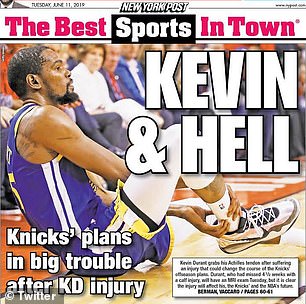 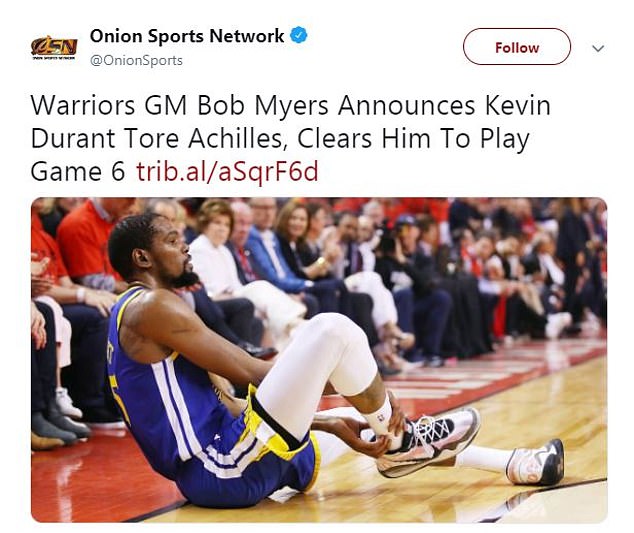 The satirical newspaper, The Onion, poked fun a Myers’s perceived lack of sympathy for Durant

However offering that much to Durant seems imprudent now that he could be looking at a year of rehabilitation, if he did, in fact, tear his Achilles. 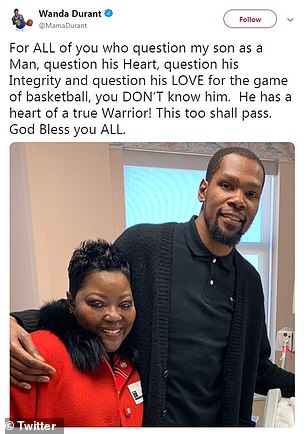 One person with a positive outlook is Durant’s mother Wanda

Whereas former NBA All-Star Dominique Wilkins managed to successfully return from a torn Achilles in the 1990s, legends such as Kobe Bryant and Patrick Ewing both struggled to recover from the same injury in their 30s and were out of the league soon thereafter.

One person with a positive outlook is Durant’s mother Wanda, whom he dedicated his NBA MVP award to during an emotional speech in 2014.

‘For ALL of you who question my son as a Man, question his Heart, question his Integrity and question his LOVE for the game of basketball, you DON’T know him,’ Wanda Durant wrote on Twitter. ‘He has a heart of a true Warrior! This too shall pass. God Bless you ALL.’

Durant has yet to speak publicly since injuring his calf on May 8. He would have spoken to reporters after Game 5, but was no longer required to do so after suffering his injury.