Up to seven more Australians have been diagnosed with rare blood clots after getting the AstraZeneca Covid-19 vaccine – as the government ramps up its vaccination rollout amid the fresh outbreaks.

The Therapeutic Goods Administration confirmed on Thursday that two men, aged 67 and 71, from NSW and Western Australia have the blood clotting disorder.

Two women, age 67 and 70, from Victoria are also confirmed cases.

One patient is in a critical condition in intensive care.

The condition, known technically as thrombosis with thrombocytopenia syndrome, is ‘very rare’, according to the TGA, with the rates in Australia consistent with other countries.

Of the 5.4 million doses of the vaccine given to Australians, there have been 51 confirmed cases and 32 probable cases – with a total of 83 cases overall.

On Tuesday it was confirmed that a 72-year-old woman from South Australia died almost three weeks after receiving her AstraZeneca jab.

Health officials said on Monday the South Australian woman’s death is ‘likely’ linked to her consumption of the vaccine.

She is the fourth person to die of complications relating to the shot, and is believed to have developed thrombosis with thrombocytopenia syndrome some time between having the jab on June 24 and becoming unwell 11 days later on July 5. 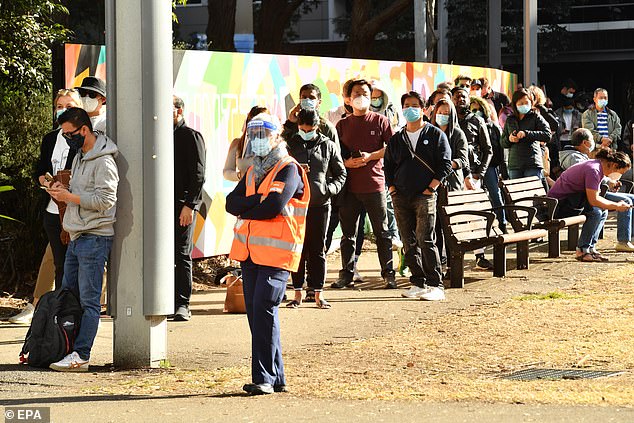 Current statistics suggest just one in 65,000 people will develop a clot – while the death rate is sitting at the one in every two million mark.

A TGA spokesman said on Tuesday that 21 patients aged between 70 and 79 had developed ‘serious blood clots with a low blood platelet count’.

Clotting is triggered by the immune system’s response to the vaccine and is not associated with other clotting conditions.

Seven of those patients have developed clots in an unusual location, like the brain or abdomen.

The AstraZeneca vaccine was initially restricted to patients over 60, but that age was dropped to 50 in an attempt to boost vaccination rates.

More recently, Prime Minister Scott Morrison has opened the floodgates to allow any adult to receive the vaccine – so long as they sign an indemnity waiver and seek medical advice from their healthcare professionals.