A 13-inch-long copper spearhead found by a metal detectorist on a beach in Jersey is more than 3,000 years old, experts say.

The ‘rare and complete’ spearhead, which still has remnants of the wooden shaft still attached, dates back to the late Bronze Age, somewhere between 1207 and 1004 BC.

It was found near Gorey Harbour in Jersey’s east last August – but archaeologists have only now confirmed its age with the results of radio carbon dating.

It is ‘completely different’ due to its size and the fact that it’s so well preserved – likely due to protection from the air by the black sand from which it was pulled.

It was found on the beach at Gorey by Jay Cornick, a Jersey-based metal detectorist and electrical engineer.

Cornick brought it to independent trust Jersey Heritage to be recorded, in line with recommended best practice for non-treasure finds there.

It’s thought to be unique to the Channel Islands and a rare find in Britain.

‘This spearhead is completely different from everything else we have,’ said Olga Finch, curator of archaeology at Jersey Heritage.

‘The spearhead is a really exciting find for Jersey – it is unique and very rare in terms of its large size and the fact that it is intact. 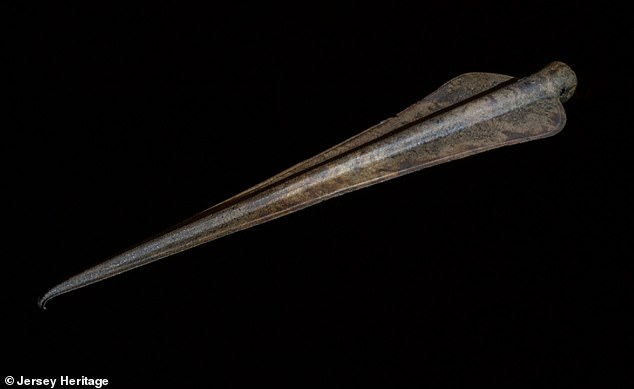 ‘The Bronze Age items we already have in our collection are mainly from hoards, which are usually great deposits of metal tools and weapons but mostly broken up and used.

‘It also doesn’t fit with what we already know about this period of time so we’re wondering if it was deposited as part of a ritual or an offering.

‘Our next step is to work with experts elsewhere and look at the location of the find to discover what new stories we can find out about the Bronze Age in Jersey.’

Paul Driscoll, Archaeology and Historic Environment Record Officer at South Gloucestershire Council, has studied and researched the Bronze Age collections at Jersey Heritage and more widely in the Channel Islands.

‘The spearhead is in such good condition,’ Driscoll said.

‘Many of the spears in the Jersey Heritage collection are broken – I think deliberately in prehistory as they are uniform in their breakage and thus unlikely to be random.

‘There are, however, a few intact examples but none that parallel this one.’

Conservation work on the spearhead was carried out by Jersey Heritage’s Museum Conservator Neil Mahrer, who said he had never seen anything like it in his career. 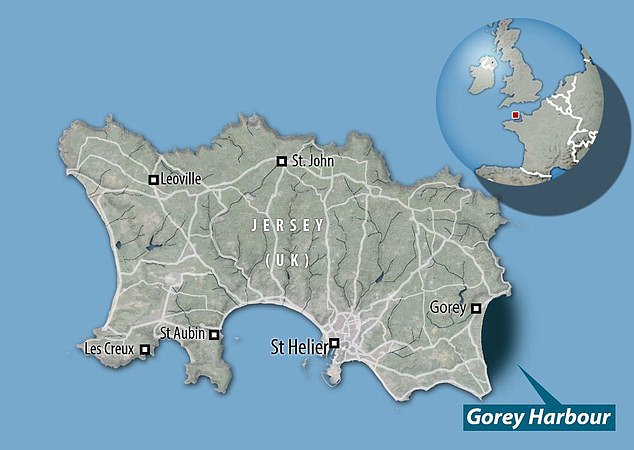 The Bronze Age spearhead was found at Gorey Harbour and is now on display in a new finds case at Jersey Museum & Art Gallery, which is in Saint Helier in the island’s south

‘To see this spearhead in one piece was incredible and the wood inside the spear shaft was so well preserved that we were able to use it to discover that it dated back to over 3,000 years ago,’ he said.

Mahrer sent the wood to York Archaeological Trust, who used carbon dating to approximate the date of the wood and therefore the artefact as a whole.

When Cornick found the artefact last summer it was buried point-down one of the lowest tides of the year when his metal detector went over it.

‘It was at a 45-degree angle and when I dug it I saw the end of it and just pulled it out. 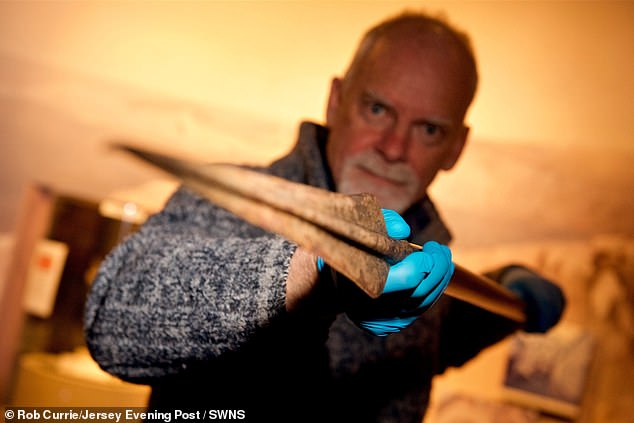 Neil Mahrer, Jersey Museum conservator, with the spear. He said: ‘To see this spearhead in one piece was incredible’

‘It came out with a sucking sound. It was deep enough into the black, clayey sand that doesn’t move with the tide that it may have been there since it went in.

‘When I found the spear I didn’t think it was that important or that old.

‘My initial thought when I dug it out was that it was a modern fishing spear and probably less than 100 years old so it was just thrown in my bag until I got back to the car.

‘Then I looked again and thought it might have a little bit of age to it.’

The Bronze Age spearhead is now on display in a new finds case at Jersey Museum & Art Gallery, which is in Saint Helier in the island’s south.

It was a time when sophisticated bronze tools, pots and weapons were brought over from continental Europe.

Skulls uncovered from this period are vastly different from Stone Age skulls, which suggests this period of migration brought new ideas and new blood from overseas.

Bronze is made from 10 per cent tin and 90 per cent copper, both of which were in abundance at the time.

Crete appears to be a centre of expansion for the bronze trade in Europe and weapons first came over from the Mycenaeans in southern Russia.

It is widely believed bronze first came to Britain with the Beaker people who lived about 4,500 years ago in the temperate zones of Europe.

They received their name from their distinctive bell-shaped beakers, decorated in horizontal zones by finely toothed stamps.

Textile production was also under way at the time and people wore wrap-around skirts, tunics and cloaks. Men were generally clean-shaven and had long hair.

The dead were cremated or buried in small cemeteries near settlements.

This period was followed by the Iron Age which started around 650 BC and finished around 43 AD.