Rare color footage has been found of the World’s Tallest Man.

Home movie footage that was thought lost for decades has now reemerged and appears to have been taken during one of Wadlow’s personal appearances in the late 1930s. 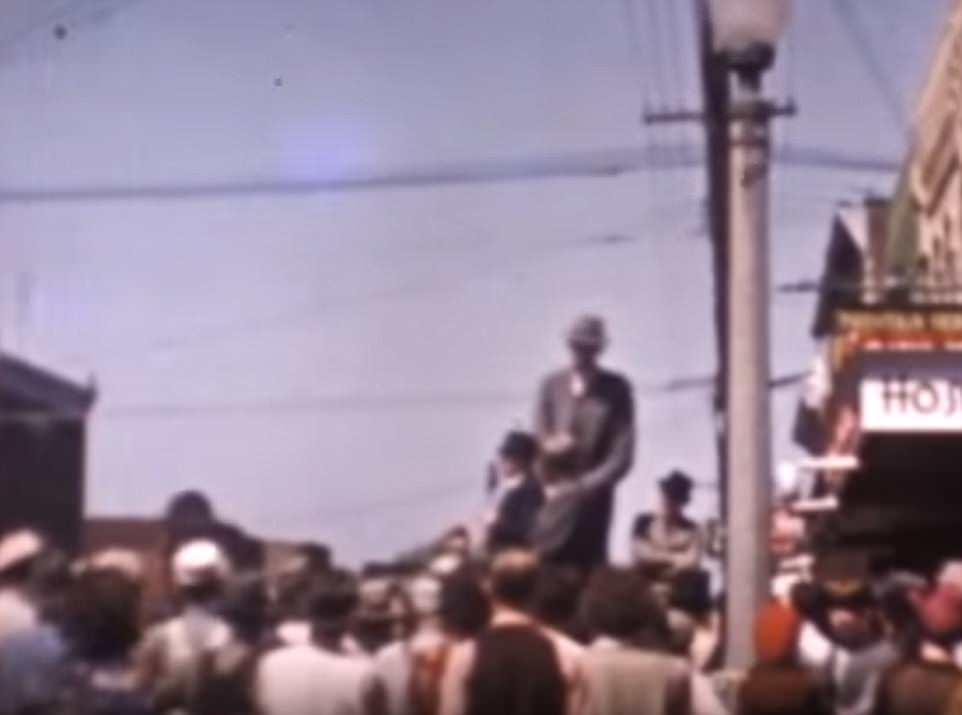 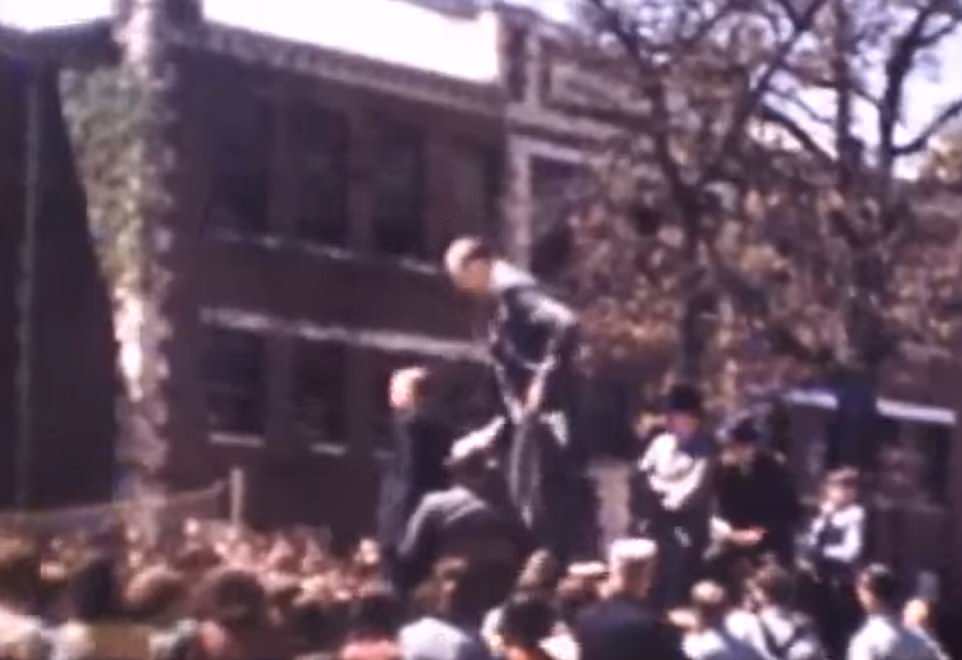 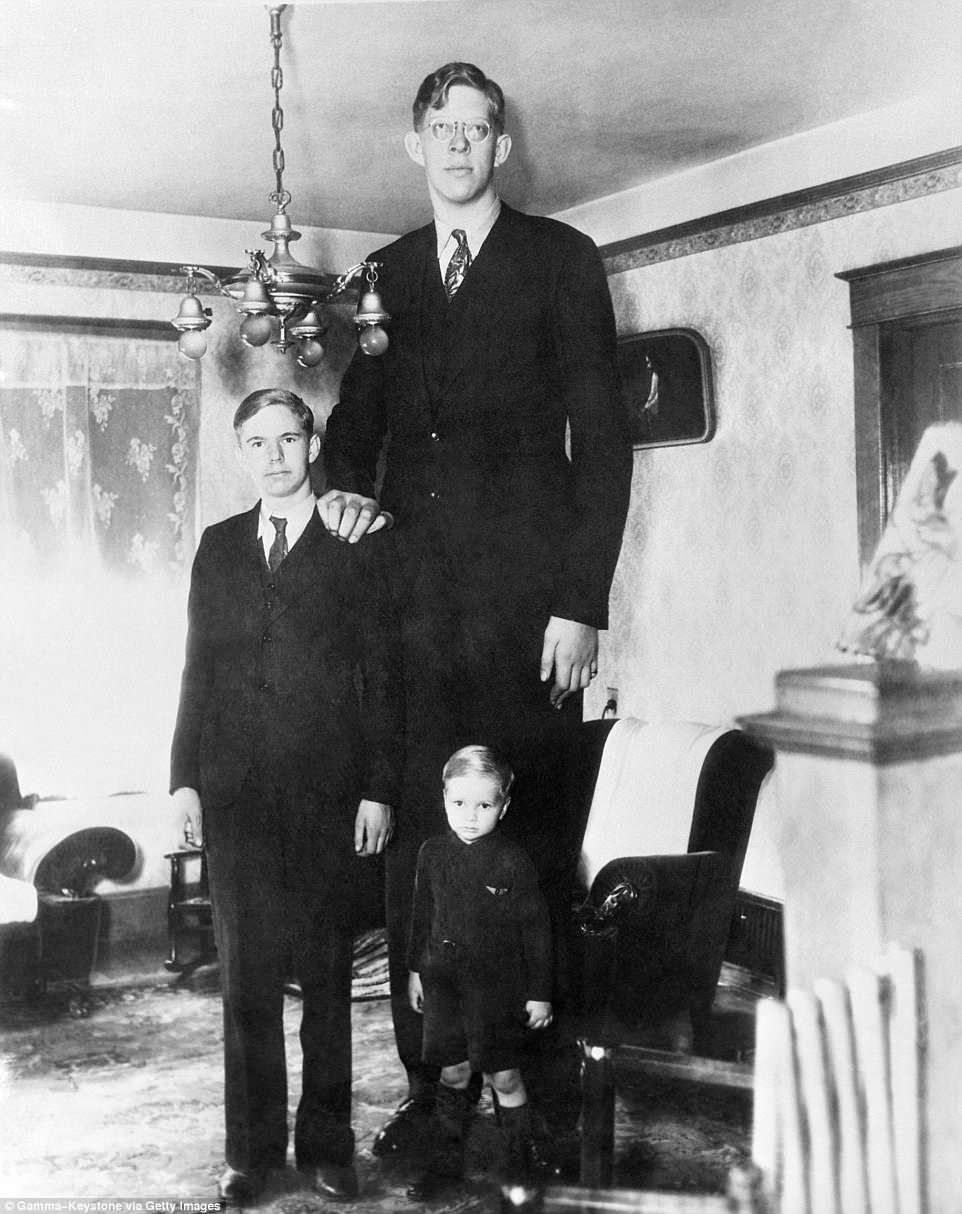 Wadlow was the oldest of five children. Here’s Wadlow on his 17th birthday with his two younger brothers 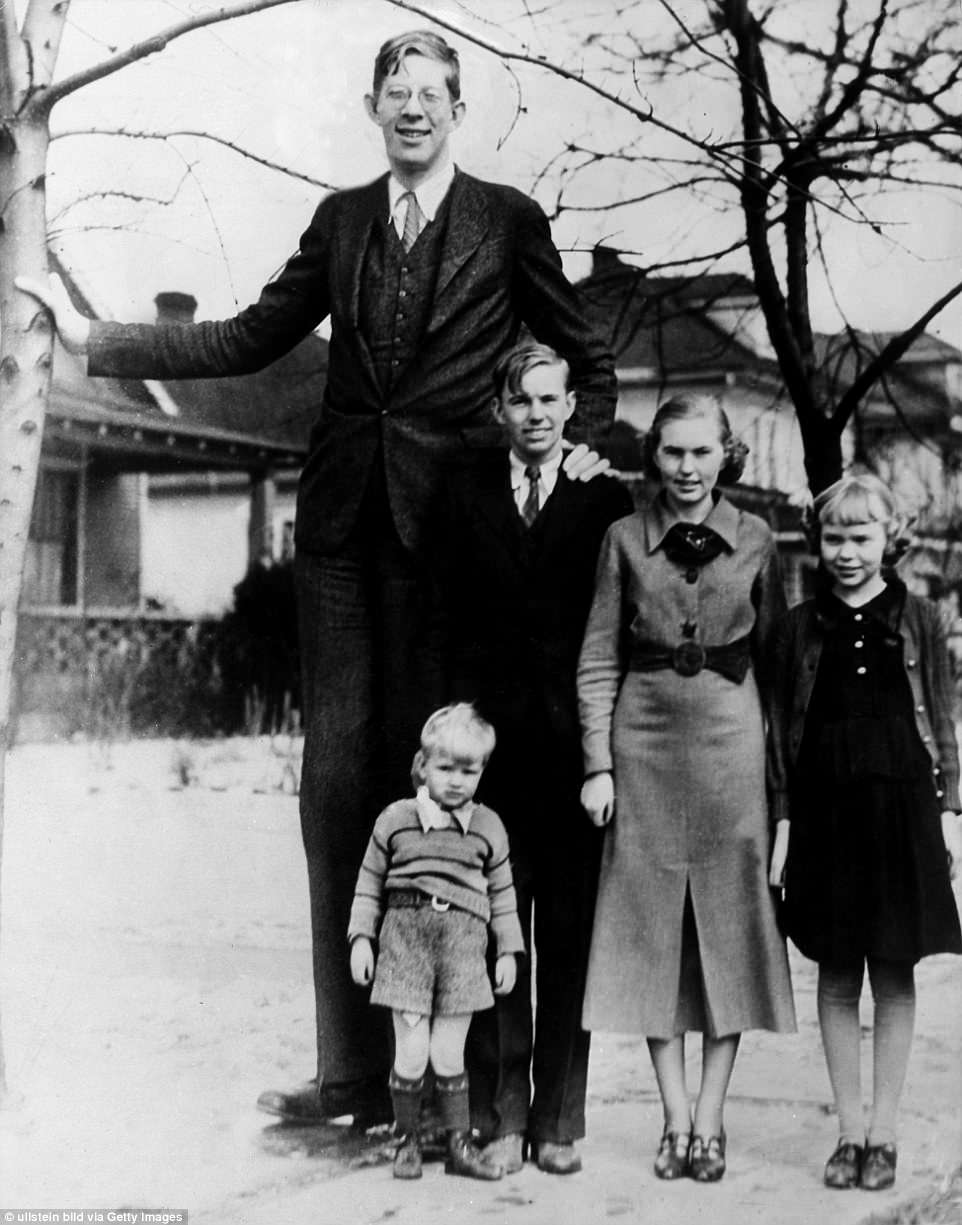 Robert Wadlow, at 2.80m tall in Illinois With his brothers and sisters in 1936 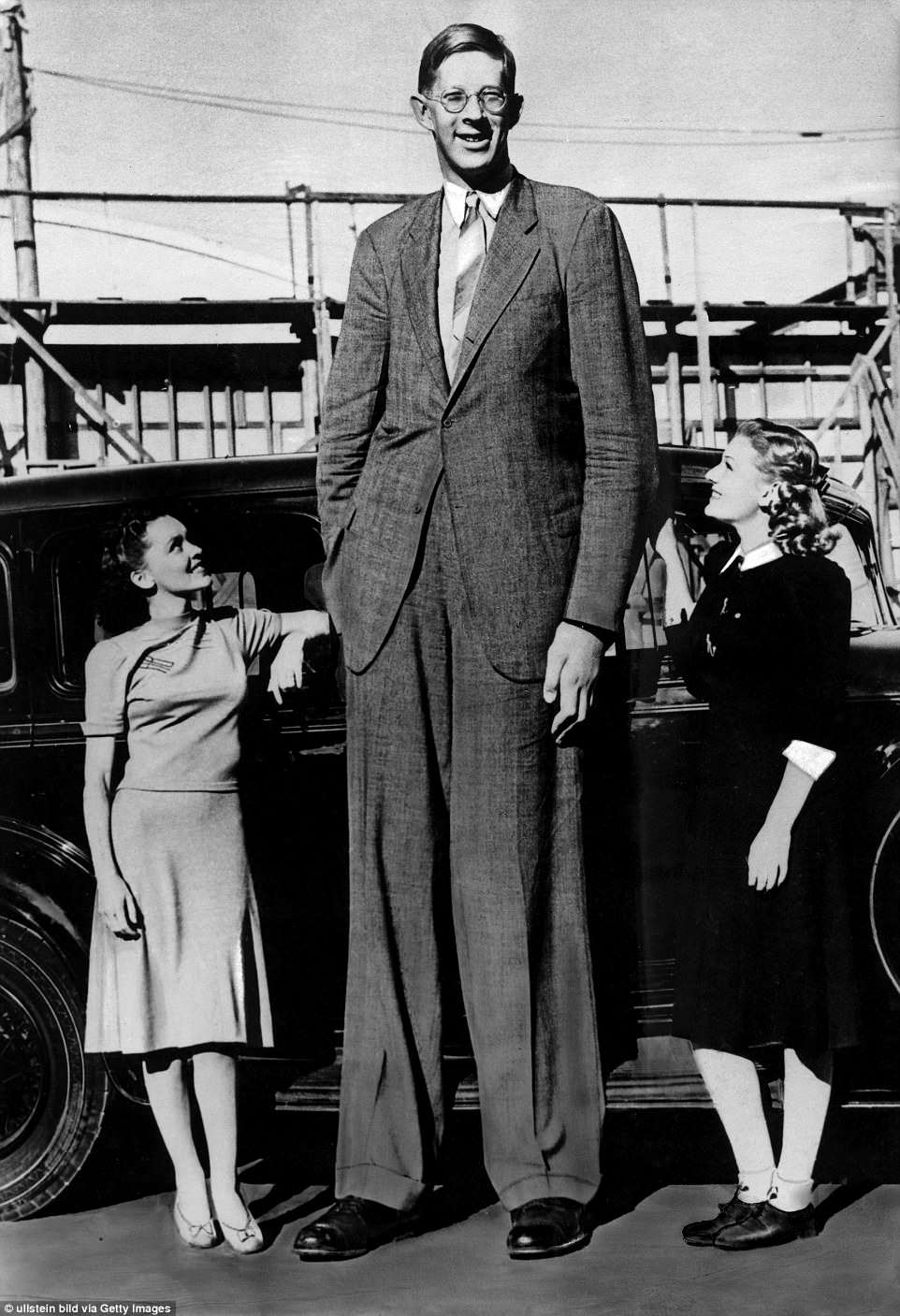 Robert would often pose for pictures with people during personal appearances. His nickname was ‘Skycraper’ 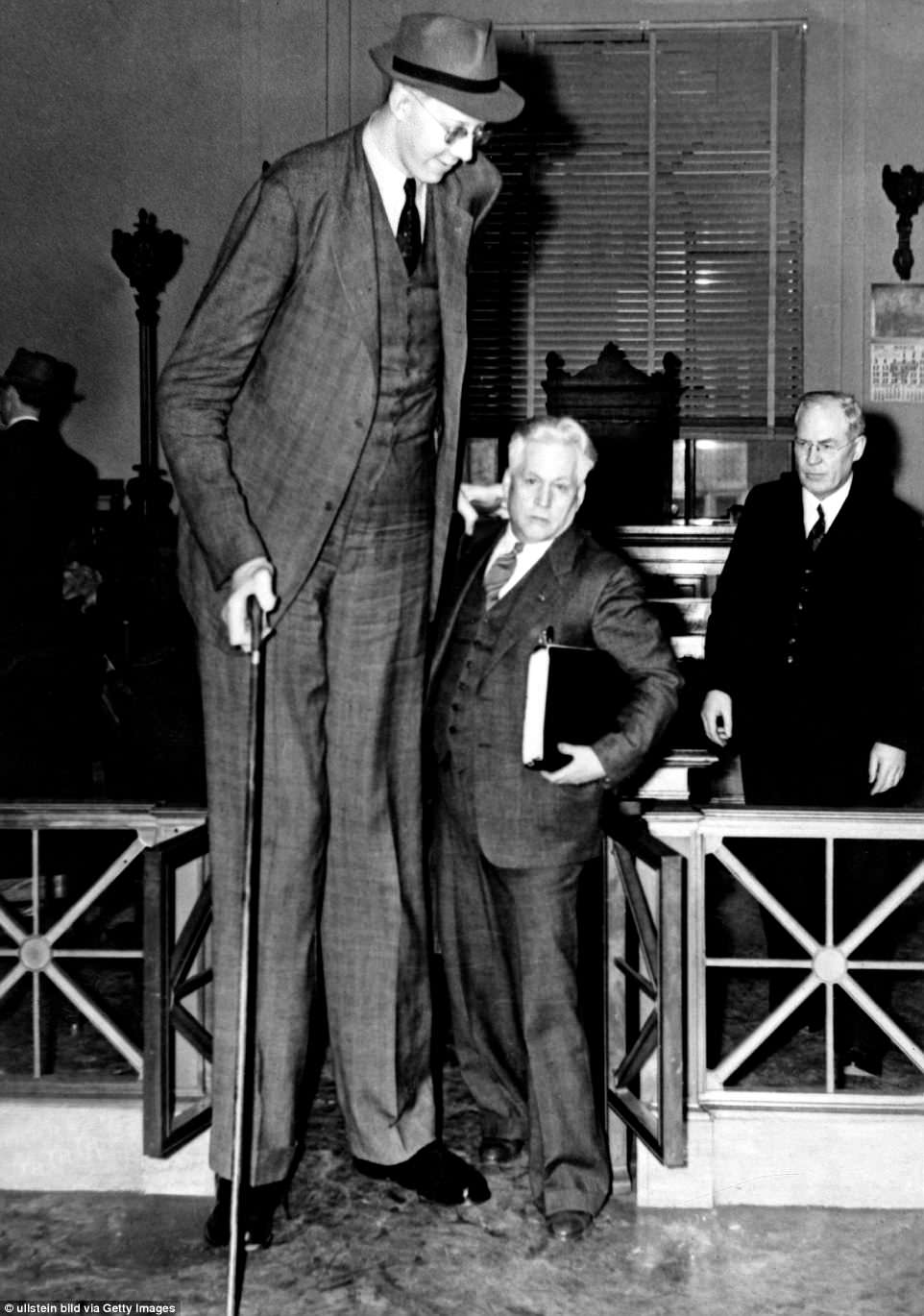 Homes, public spaces, and general household items weren’t exactly equipped for a man of his height, and he often had to make adjustments to be able to perform simple tasks

Born on February 22, 1918, Robert Pershing Wadlow was born at 8lb 7oz and from there began to grow exceptionally fast and exceptionally tall.

By his first birthday, he was 45 pounds, and 3 feet, 3.5 inches tall. At his eighth birthday, he had exceeded his father’s height of 5 feet, 11 inches. At 13, he became the world’s tallest Boy Scout, at 7 feet, 4 inches and by the time he graduated high school, he was 8 feet, 4 inches tall according to Guinness World Records.

Robert was diagnosed with hyperplasia of the pituitary gland which caused him to grow rapidly due to an abnormally high level of human growth hormones in his body.

Despite his size, Robert’s parents tried to make his life as normal as possible. At school a special desk was made for him and as the oldest of his four brothers and sisters, he was expected to play take part in the same activities they did according to AllThatsInteresting.com. 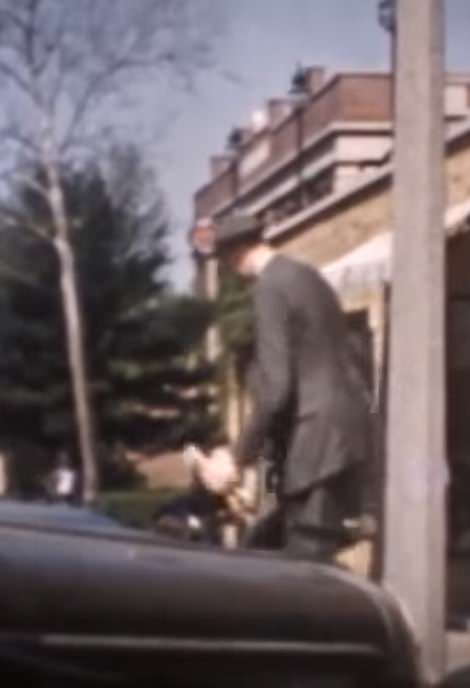 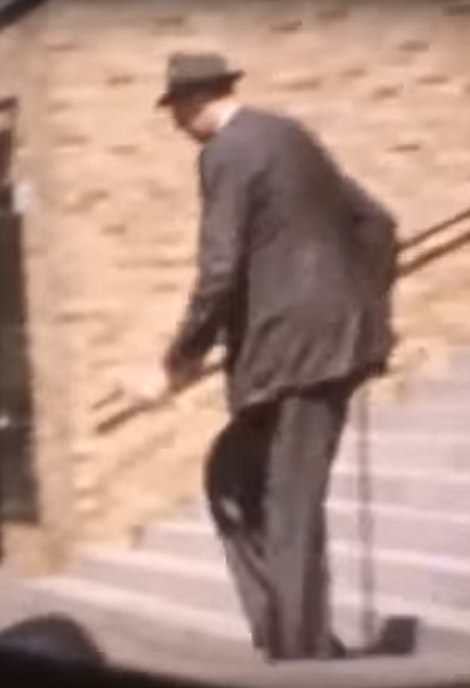 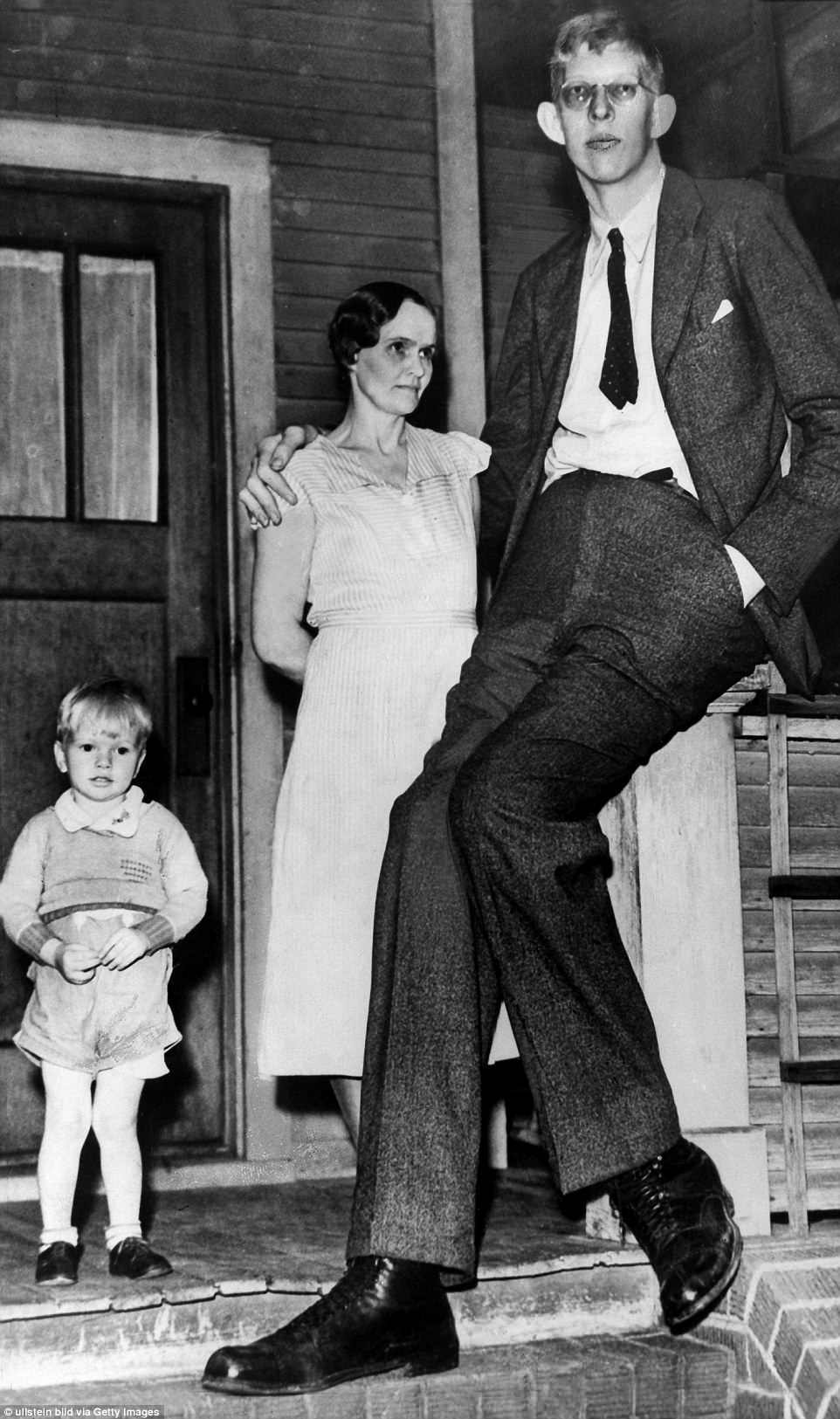 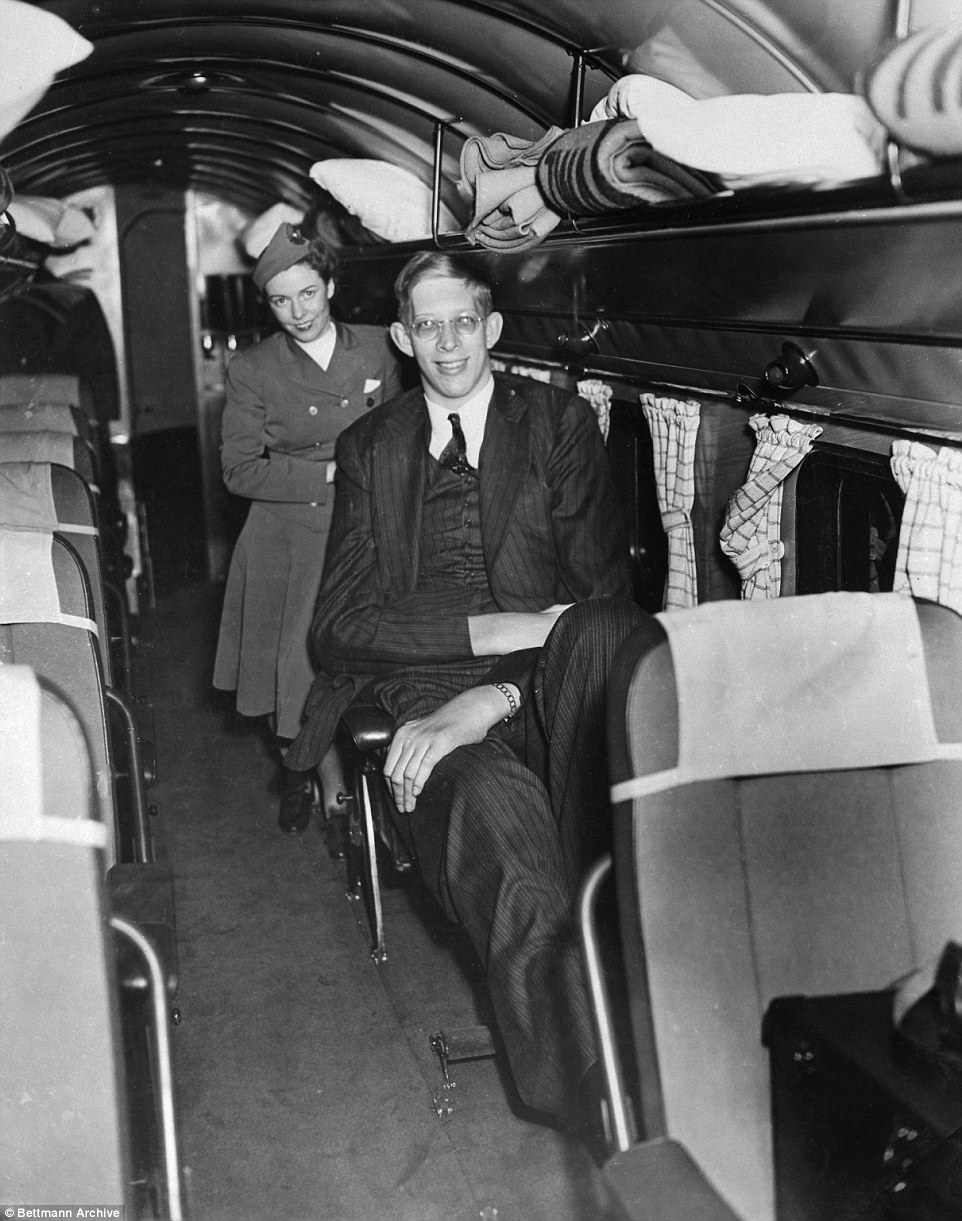 On one occasion he traveled by plane from New York from St. Louis to appear on a radio program. To accommodate his big frame, a row of seats had to be removed to make leg room 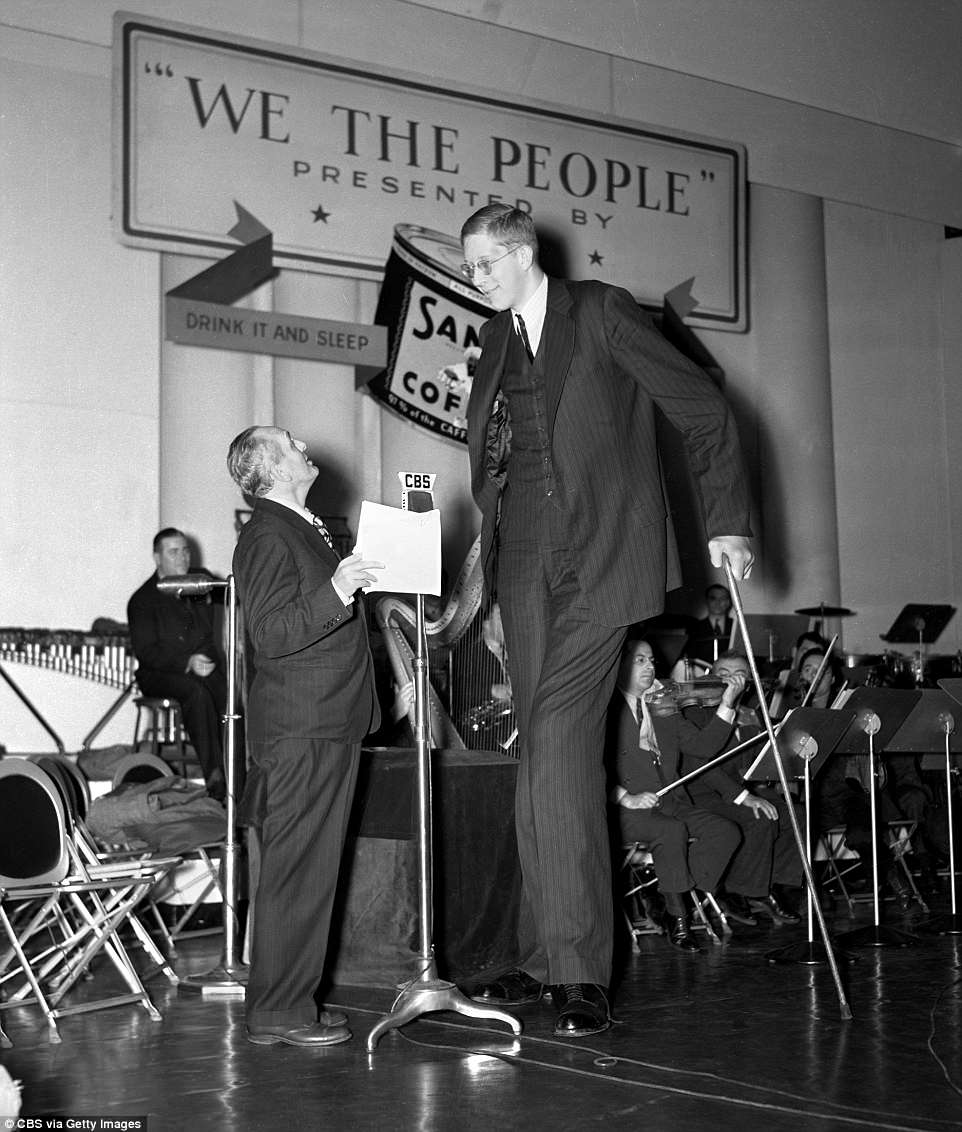 Wadlow was a quiet and mild-mannered young man, which led to him be called a ‘gentle giant.’ He enjoyed photography and playing guitar — until his hands grew too large to do either 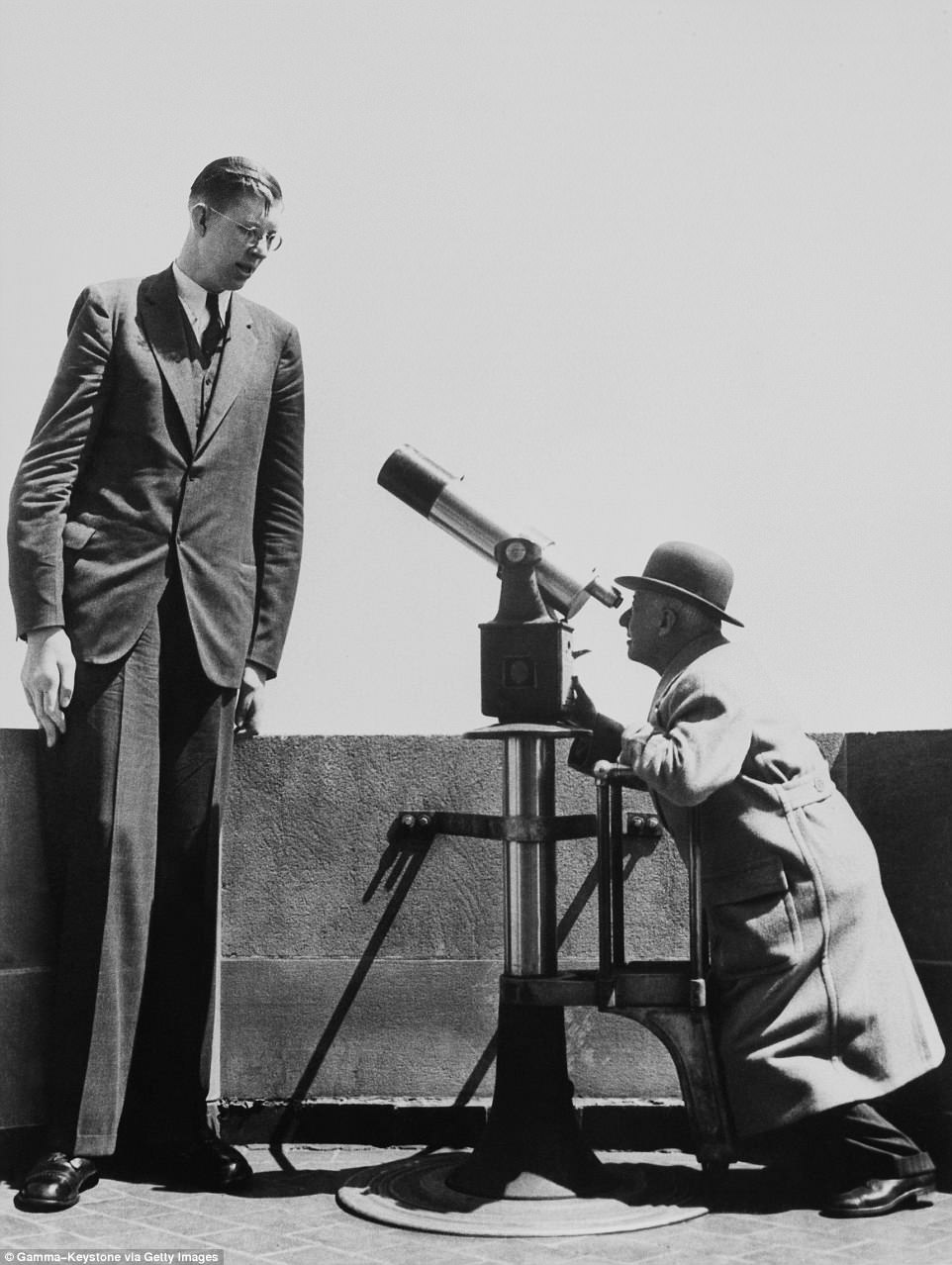 Because of his extreme height he suffered from a lack of feeling in his legs and feet but opted never to use a wheelchair instead preferring to walk on his own.

In 1936, Ringling Brothers spotted Robert and recruited him for their traveling circus. Hie presence drew a huge crowd, turning him into quite a celebrity.

A couple of years later, in 1938, the International Shoe Company contacted him, offering him a job and becoming the face of the brand. He received all of his specially-made, size 37AA shoes free of charge according Mashable.

When he wasn’t taking part in circuses or travelling the world promoting shoes, Robert lived a quiet life. Friends and family describe him as a ‘gentle giant.’

Day-to-day life to Robert wasn’t easy with houses, public spaces, and everyday household items which were not designed for a man of his height. 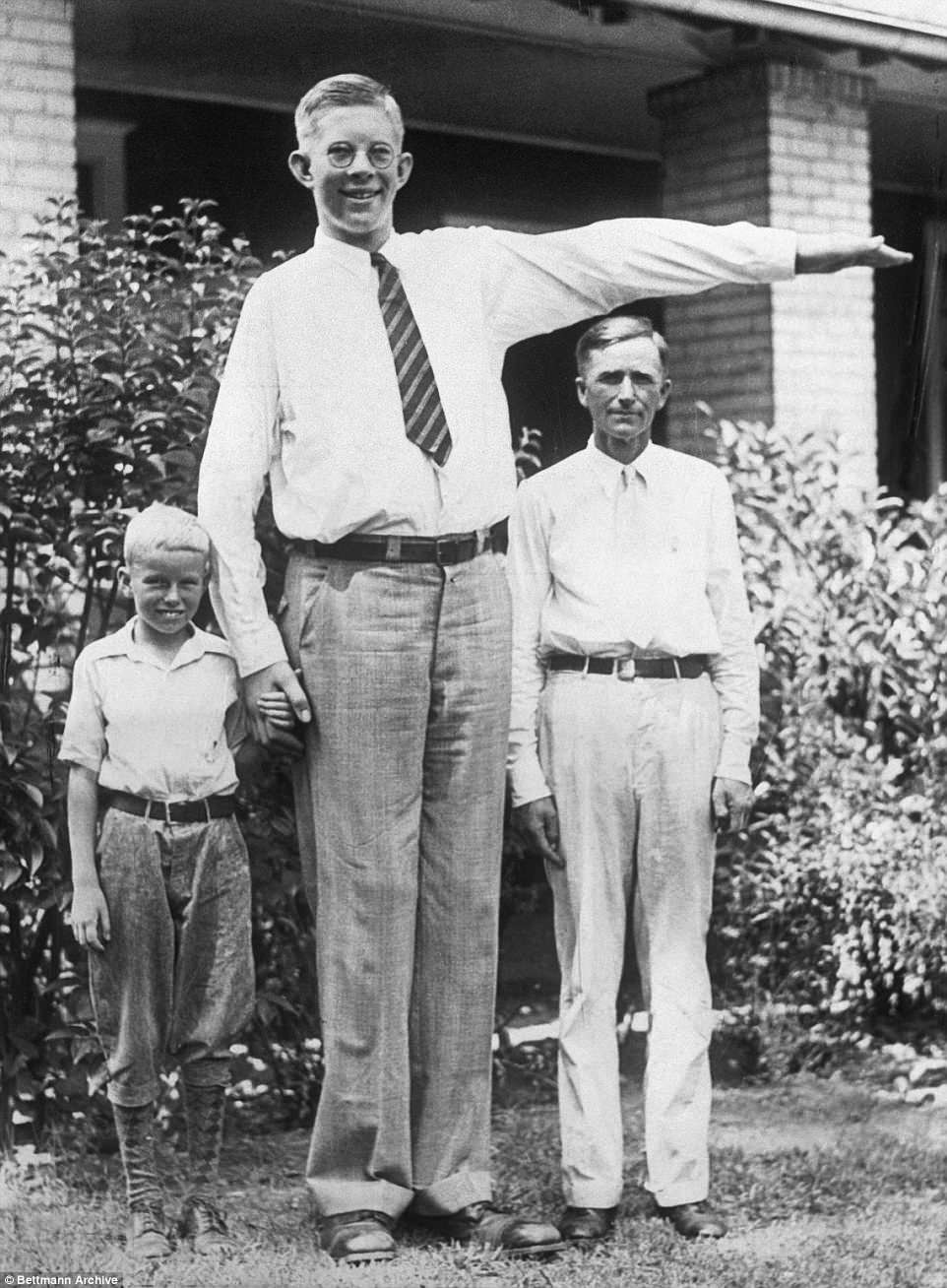 Robert was 7 feet 4 inches tall and weighed 290 pounds at the age of 13. He is shown here with his father, Harold and brother, Eugene, 9 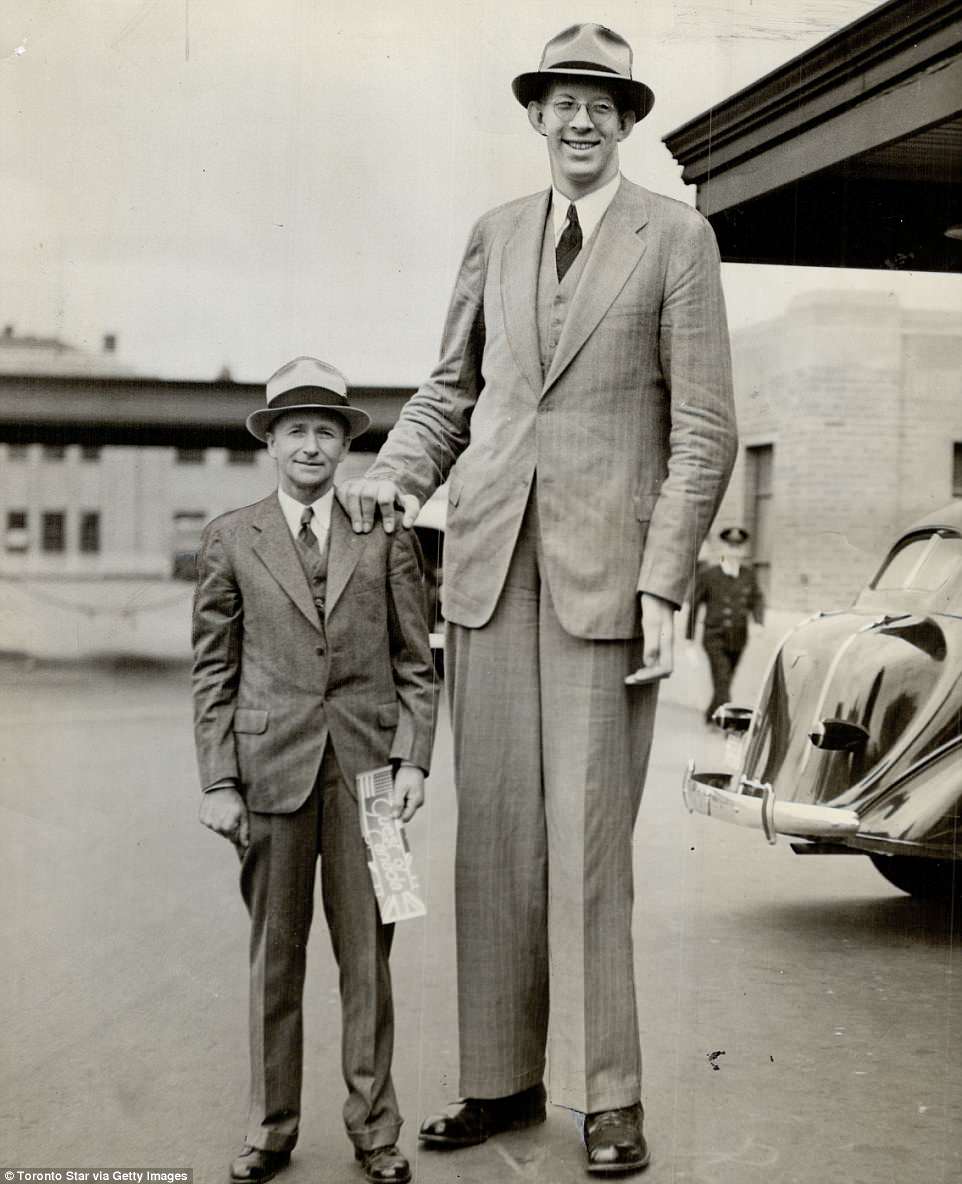 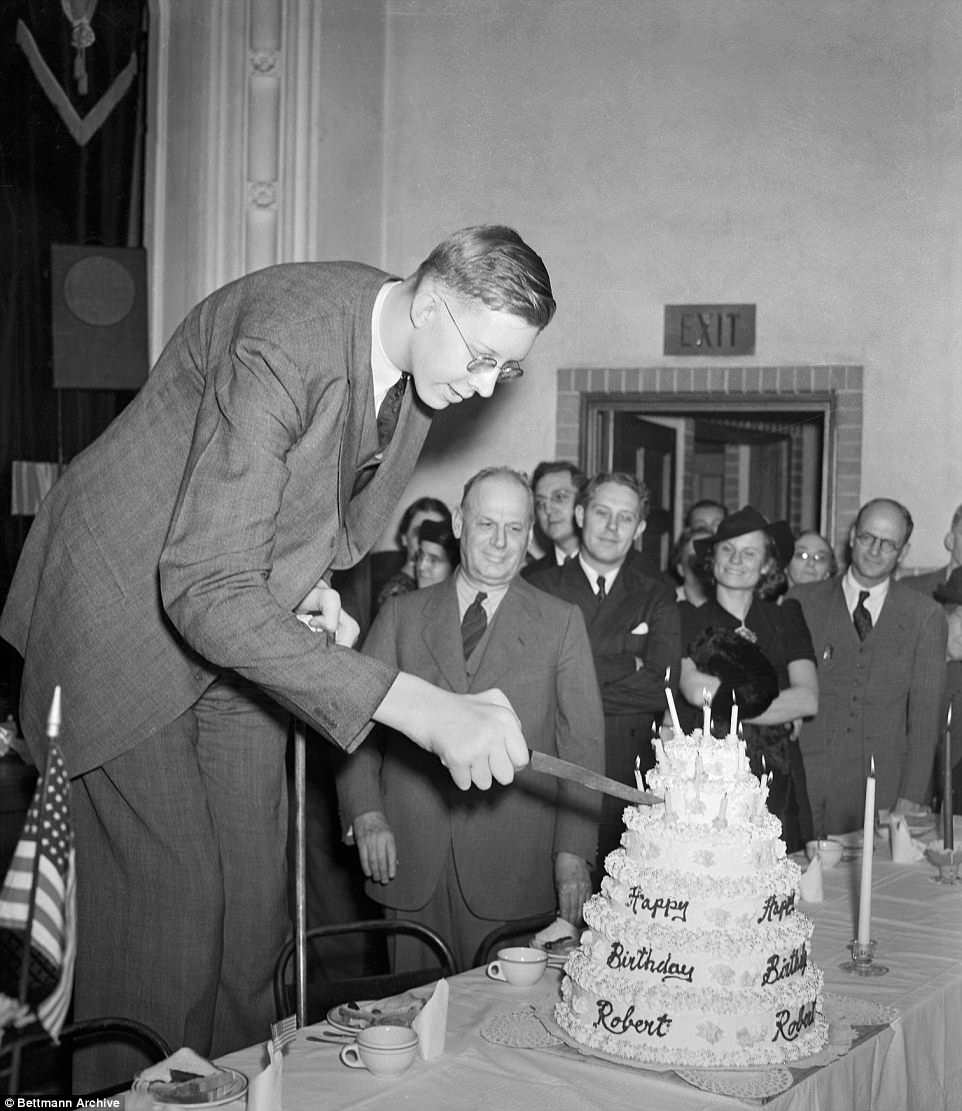 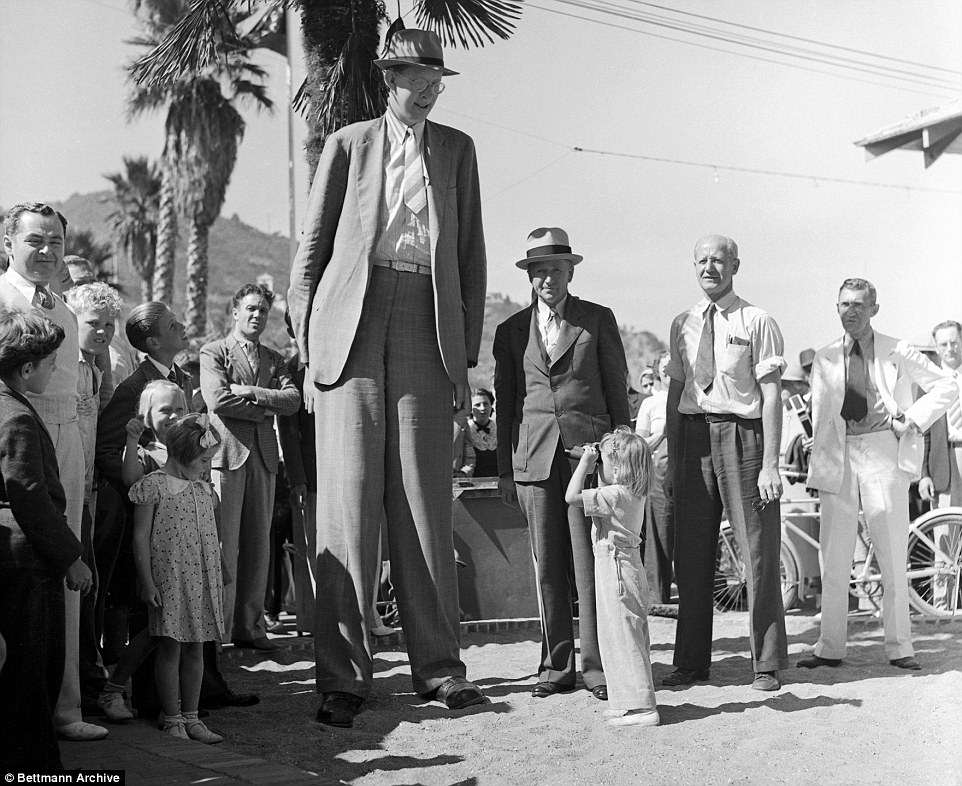 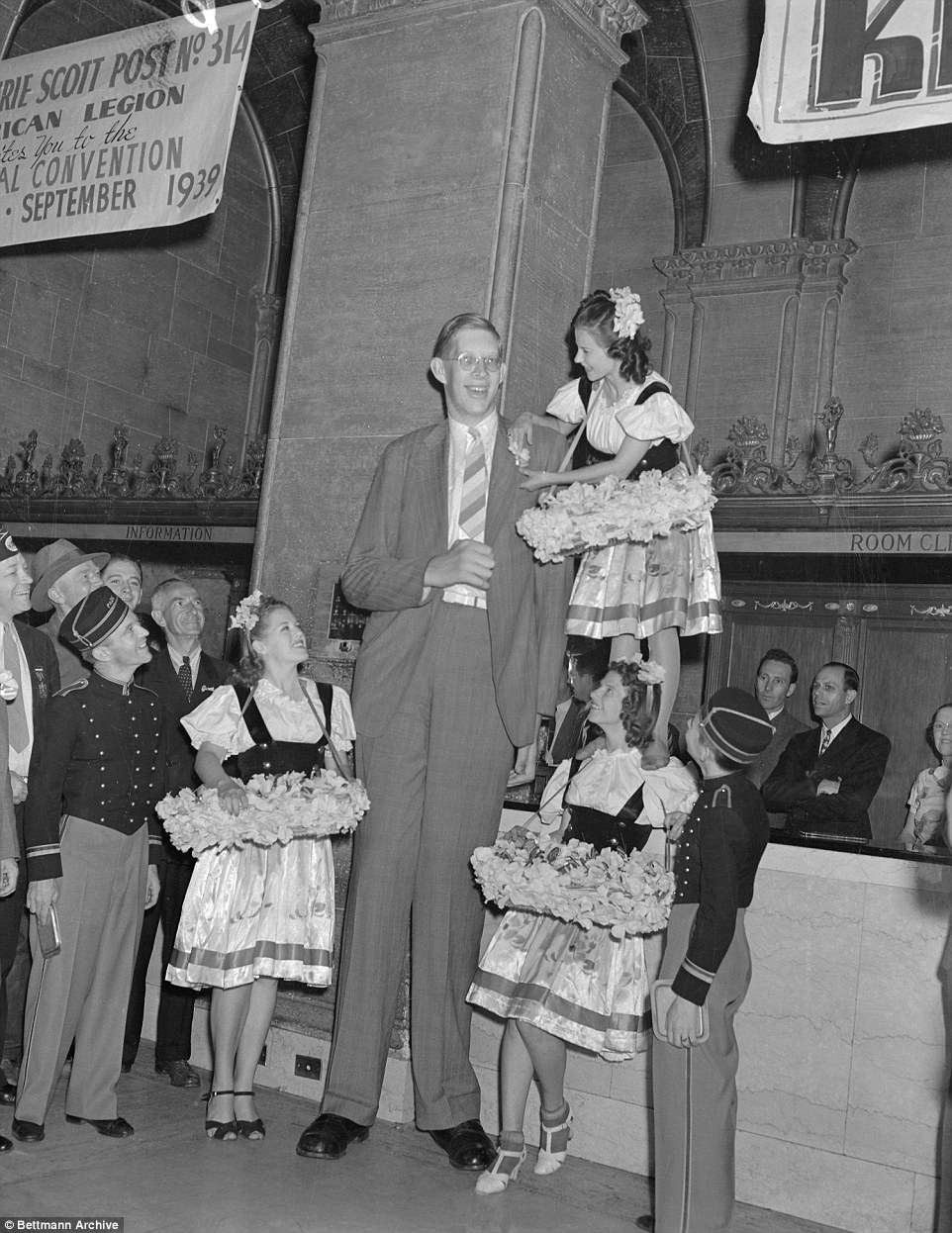 Pearl Tolson, standing on the shoulders of another poppy girl, pins a poppy on the lapel of Robert Wadlow who had the distinction of being the tallest man in the world

In order to walk properly, special braces had to be fitted to his legs – however because he had very little feeling in his legs he was unaware that the braces were rubbing against his ankle.

In 1940, a blister formed that became infected, causing doctors to resort to a blood transfusion and emergency surgery.

Unfortunately, his great height also left him with a weakened immune system, and he eventually succumbed to the infection.

A life-size bronze statue of him stands in his hometown of Alton, Illinois, while three others stand in Guinness Museums around North America with several wax models of him in Ripley’s Believe It or Not Museums for people stand alongside and pose next to him. 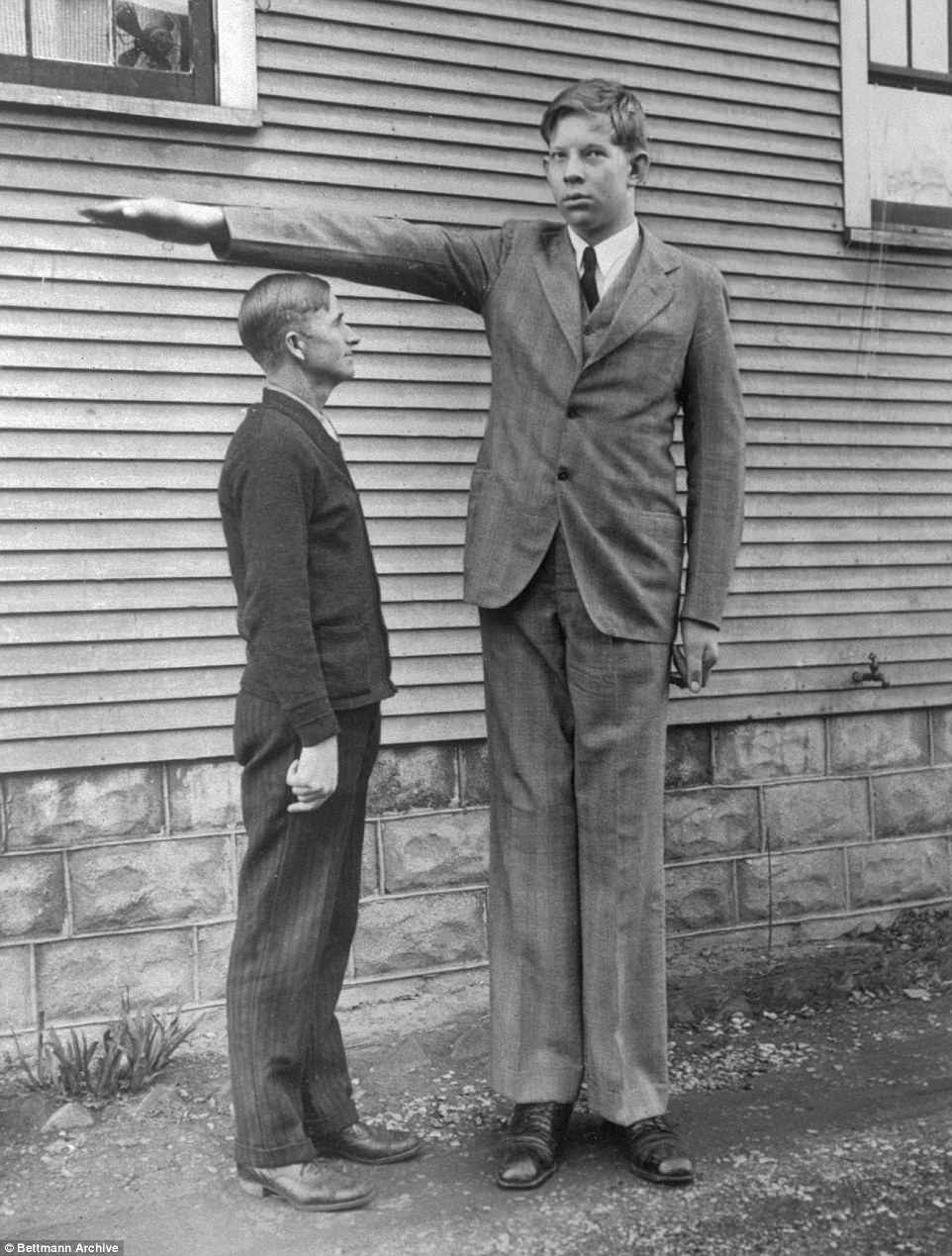 Robert is shown at age 13 with his father, Harold. His father was 5ft 11in while he was 7ft 4in 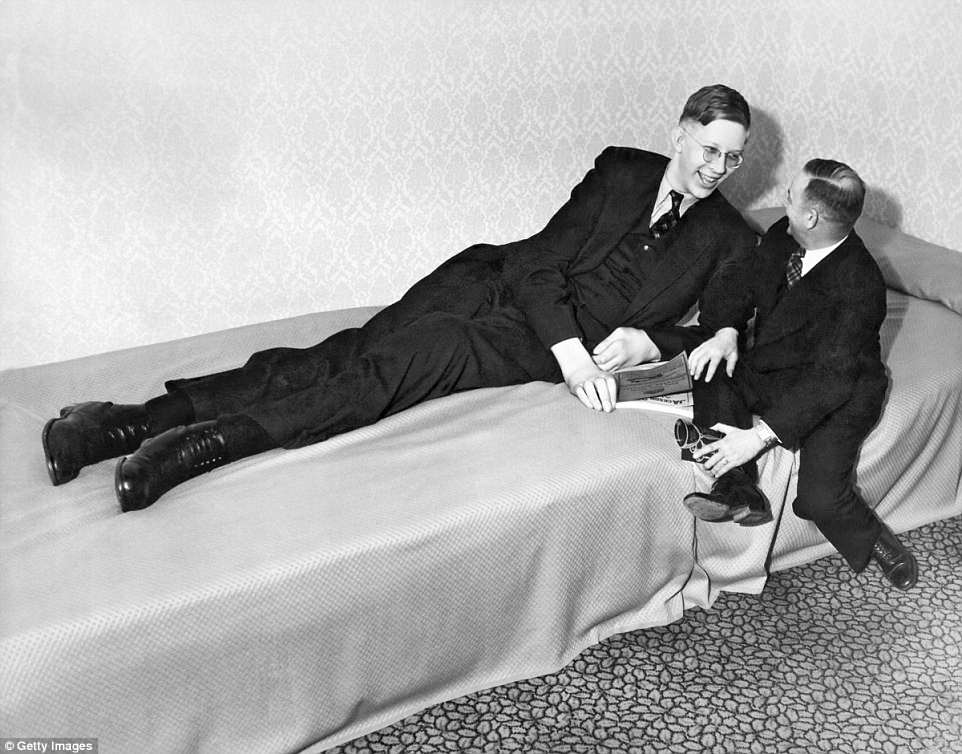 Nineteen year old Robert Wadlow of Alton, Illinois, chatting with a friend after appearing at a charity event, Omaha, Nebraska in 1937. He was eight feet, seven inches tall at the time. 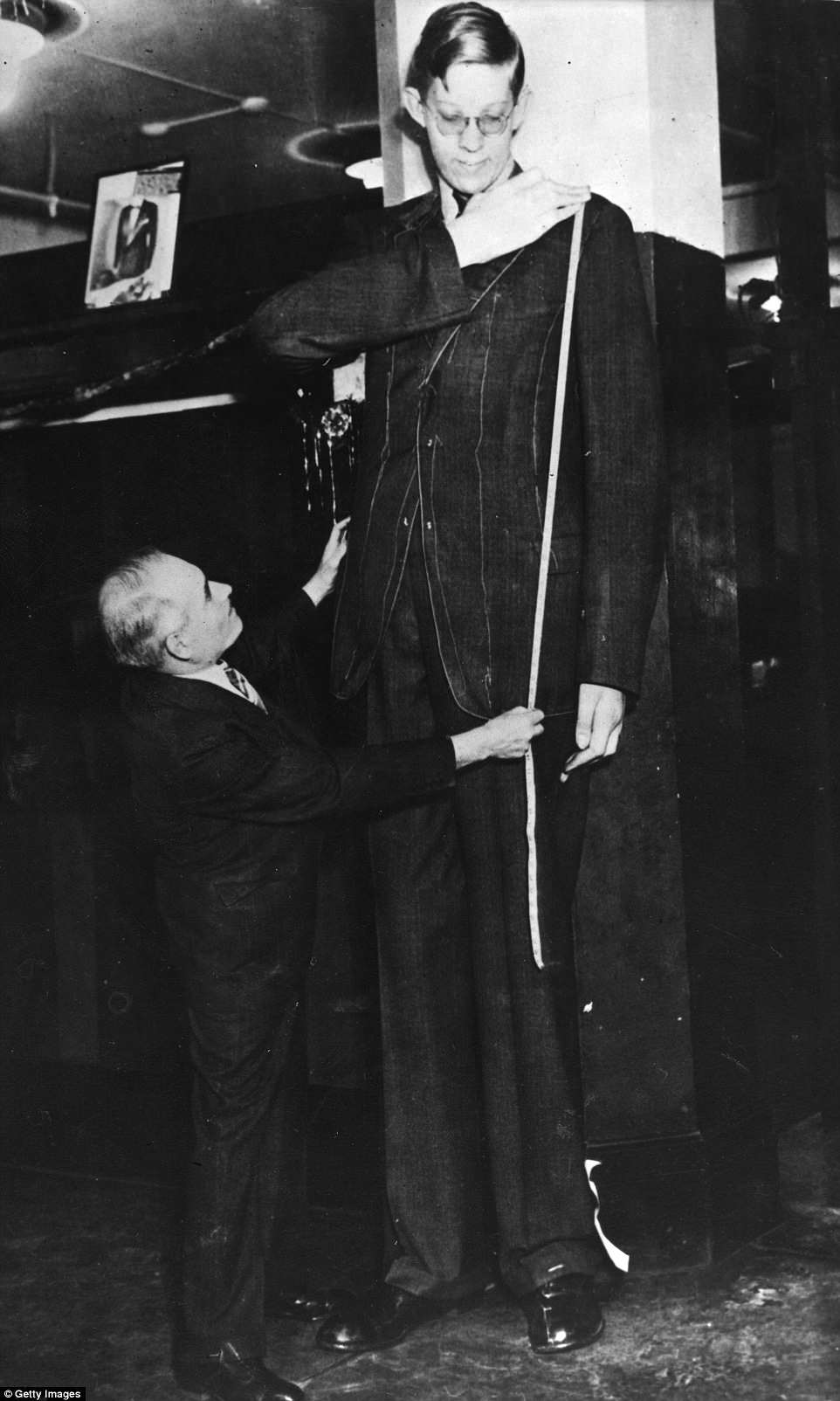 As a young man, Wadlow’s custom-made clothes required three times the amount of cloth. Here’s Wadlow being measured for a suit jacket for his 8-foot-3-inch stature 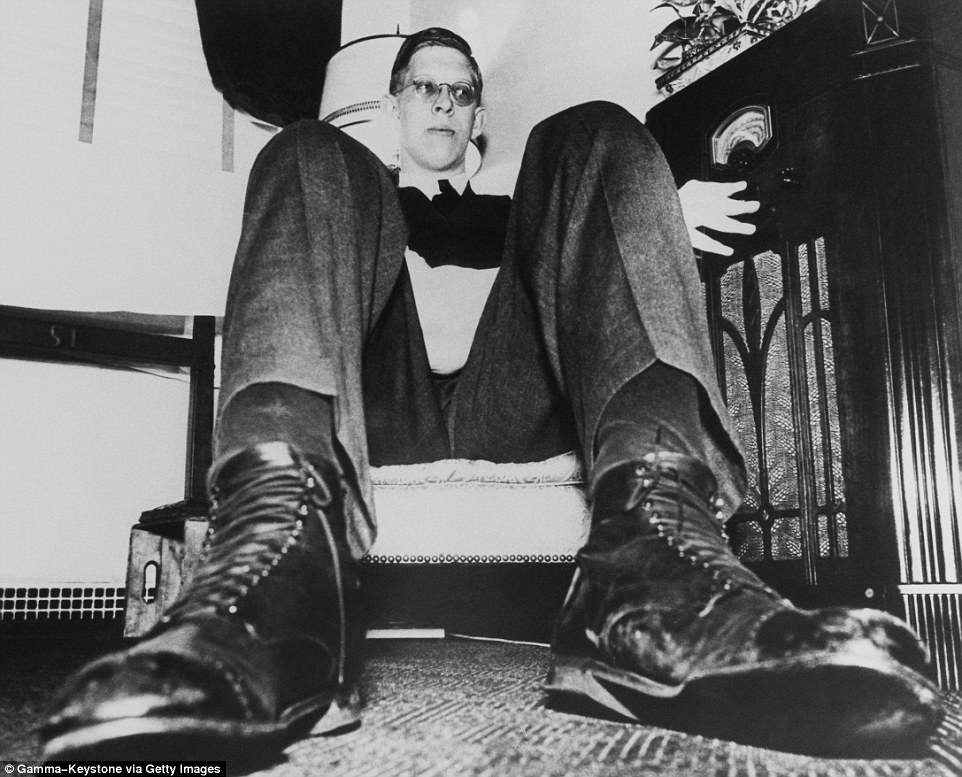 You know what they say about men with big feet? Big shoes!