Residents of the southeastern U.S. witnessed a galactic light show this week when a ‘earthgrazer’ meteor flew across the night sky, NASA said.

The luminescent fireball became visible on November 9 at 6:39 p.m., NASA Meteor Watch said in a Facebook post, adding it was captured by three NASA meteor cameras.

It first appeared over Taylorsville, Georgia at an altitude of 55 miles, just below the Kármán line – the boundary between Earth’s atmosphere and outer space – moving at a speed of 38,500 mph.

It next appeared 44 miles above above Owens Cross Roads, southeast of Huntsville, Alabama.

An ‘earthgrazer’ meteor flew across the night sky earlier this week, NASA said 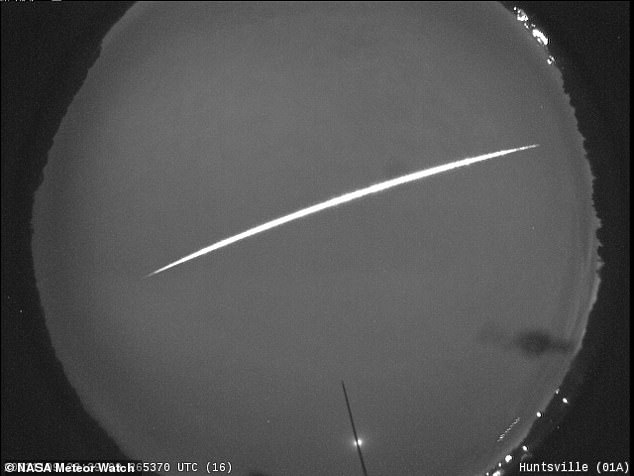 The fireball became visible on November 9 and was first spotted over Georgia, then Alabama and finally Tennessee 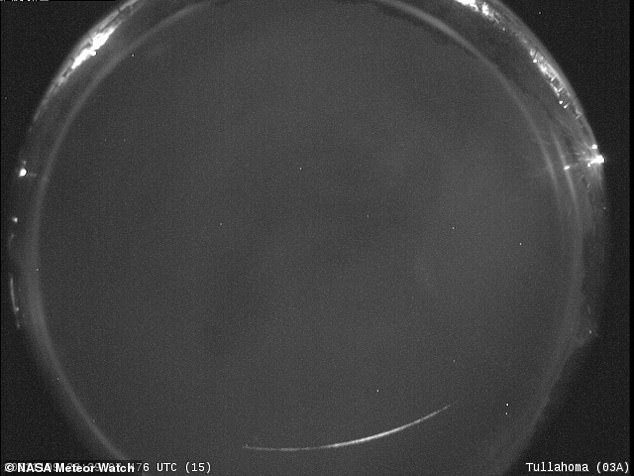 It was last spotted was 34 miles above Lutts, Tennessee, before disintegrating 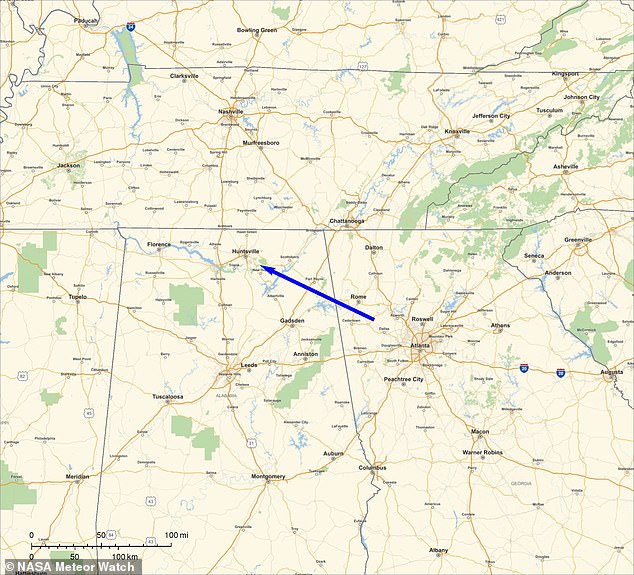 It hit a speed of 38,500mph while over Georgia, eventually traveling 186 miles in total

These meteors enter the planet’s atmosphere at a very shallow trajectory and will often ‘skim’ across the upper atmosphere, bounce and head back to space

The last place it was spotted was 34 miles above Lutts, Tennessee, putting its total journey at a whopping 186 miles.

It was able to complete the three-state journey as it entered at a ‘very shallow angle’ of only five degrees from the horizontal.

The space agency was unable to determine the size of the fireball as its light was dimmed by overcast skies.

Often times, they will ‘skim’ across the upper atmosphere for a long distance, ‘bounce off’ the atmosphere and head back into space.

‘A rare meteor for those fortunate enough to see it,’ NASA Meteor Watch added.

This class of meteors ‘can travel a considerable distance before getting low enough to completely burn up,’ NASA has said previously.

In May 2014, a basketball-sized meteoroid entered the atmosphere 63 miles above Columbia, South Carolina.

This earthgrazer was flying at speeds of 78,000 mph, before it burned up 52 miles above Tennessee, traveling a total distance of 290 miles, ‘quite rare for a meteor,’ NASA wrote at the time.

When meteoroids – small pieces of asteroids or comets – enter the Earth’s atmosphere, they become meteors or fireballs.

If it makes it to Earth, it becomes a meteorite, which can become valuable to collectors.

In August, NASA released a new map that showed where fireball meteors have hit Earth’s atmosphere, dating back to 1988.