Rare footage of an ultra-elusive endangered antelope species around Kilimanjaro

Tanzania is home to a very elusive antelope species that cannot be found anywhere else in the world.

According to the IUCN Red List of Threatened Species, it can be classified as endangered because there are so few – and yet a team of researchers have recorded footage of the previously-undocumented animal on Mt. Kilimanjaro.

The first sighting of these antelopes – named Abbott’s duiker – hails back to 2003, but now a team from Germany’s Julius-Maximilians University have captured them on camera.

Footage shows them amid the vegetation alongside a number of other animals, and provides fresh insight into the area’s biodiversity.

In context: The first sighting of these antelopes – named Abbott’s duiker – hails back to 2003, but now a team from Germany’s Julius-Maximilians University have captured them on camera

WHAT IS THE ABBOTT’S DUIKER ANTELOPE?

Abbott’s duiker is active by both day and night and can weigh up to 130 lbs (60kg). Its diet includes fruits, flowers, green shoots and leaves (especially balsams).

It is also know to raid crops such as sweet potatoes, bananas, beans, cassava and cowpeas. The main non-human predator of Abbott’s duiker is the leopard although young are hunted by African crowned eagles and pythons. In the Udzungwa Mountains, the lion and spotted hyena are also predators.

It is a montane forest-dependent species, so it is only found in important, remnant patches of high biodiversity – disturbed and secondary montane forest and bamboo forest in the Southern Highlands, forests, swamps and moorland in Mt. Kilimanjaro and semi-deciduous and evergreen forests in the Udzungwa Mountains.

‘We recorded the Abbott’s Duiker with our video traps at eleven locations at altitudes between 1920 and 3849 meters for a total of 105 times,’ says doctoral student Friederike Gebert from the JMU Biocenter.

‘There’s even a video of a mating attempt,’ says the scientist.

And that’s not the only special feature that has now been captured on film.

The team, led by JMU Professor Ingolf Steffan-Dewenter and Dr. Marcell Peters, installed a total of five camera traps each on 66 study plots at Kilimanjaro – from the savannah in the lowlands to the forest regions at medium altitudes to the bush landscape at altitudes of up to 4550 metres.

The cameras remained on site for two weeks, after which they were collected and evaluated.

Friederike Gebert had 80,000 film snippets to go through, of which 1,600 were actually showing mammals.

Among them were a total of 33 wild mammal species – in addition to the Abbott’s duiker, species like bush pig and porcupine, lesser kudu and yellow baboon were documented.

‘All in all, we were able to show that the species richness of large mammals is greatest at mid-elevations of the mountain, i.e. in the forest regions,’ says study co-author Friederike Gebert 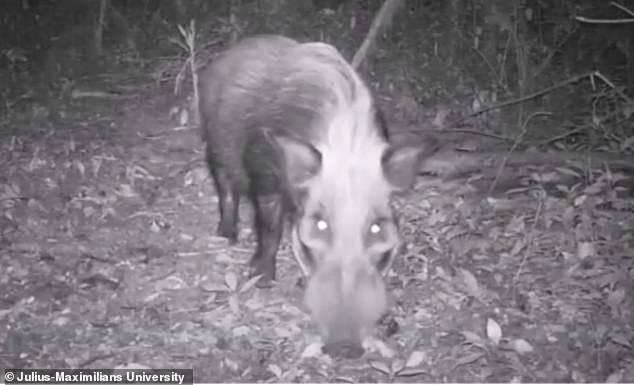 Serval cats were also recorded. These yellow-black patterned predators are about the size of lynxes, but more daintily built. The videos also show a very special kind of serval: an animal whose coat is completely black.

‘All in all, we were able to show that the species richness of large mammals is greatest at mid-elevations of the mountain, i.e. in the forest regions,’ says Friederike Gebert.

The more plant biomass and potential prey there are, the greater the biodiversity.

‘In the case of large mammals, biodiversity is particularly high in nature reserves, while it falls by 53 percent in unprotected areas – even though many of the unprotected areas still have natural vegetation,’ adds Professor Steffan-Dewenter.

‘Our study thus underscores the importance of protected areas for maintaining species diversity of large mammals in tropical mountain regions.

‘To preserve the existing protected areas at Kilimanjaro and to designate further ones is a very desirable goal from the scientific point of view.’

The results of the JMU research group will be published in the Journal of Animal Ecology.