Fisherman gets the shock of his life as he hooks a three-metre, 280kg great white shark and captures it in ‘rare’ piece of footage

A festive fishing trip took an unexpected turn when a boatie accidentally hooked a three-metre great white shark that jumped out of the water.

Jason Bragg, 26, his partner, and his nephew Andre were on a Boxing Day fishing trip in Kaipara Harbour, New Zealand, when they encountered the shark.

He knew the small crew were in for a big catch when his fish finder showed ‘a sea of red’.

Jason Bragg, 26, his partner, and nephew Andre were on a Boxing Day fishing trip in Kaipara Harbour, New Zealand, when they encountered the large shark

Knowing they were in for a big day, Jason set up the GoPro he got for Christmas on the front of the boat.

Just four-and-a-half minutes later, Andre hooked what they thought was going to be the fish of a lifetime.

Andre struggled with the large ‘fish’ before the catch jumped out of the water and revealed itself to be a massive great white shark.

Jason said the crew was shocked by how the shark launched itself out of the water and showed off its impressive features. 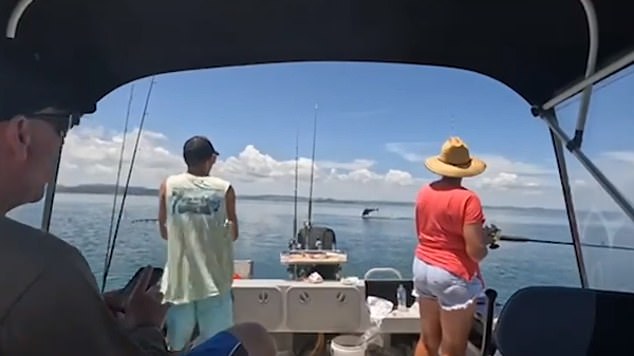 Andre had thought he’d caught a large fish before the shark launched out of the water, revealing its impressive size

‘Far out! We all saw it just come out, teeth and everything,’ Jason told the New Zealand Herald.

‘I’ve fished hundreds of times and this has never happened to me for. It was huge! It came way out of the water.’

Jason wasn’t alone in thinking the encounter was special. 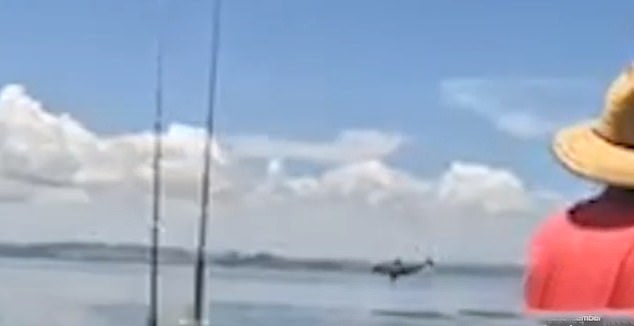 Marine Scientist Clinton Duffy confirmed not only was the shark larger than average but though great whites are very common in Kaipara it is rare to catch one breaching the surface on film.

‘I’ve seen the sharks do it quite a lot but we’ve never been able to get it on camera. This type of footage is very rare. The camera is always pointing the wrong way,’ Mr Duffy said.

Jason confirmed the shark was unharmed and swam away freely.