The landmark warship Changzheng-1 tested the water nearly 50 years ago witnessed by passionate crowds as they applauded and hailed to the leadership of the Communist Party, which had by then ruled China for just over a decade.

The vessel was completed during the Chairman Mao era and when China was going through the turbulent decade known as the Cultural Revolution. 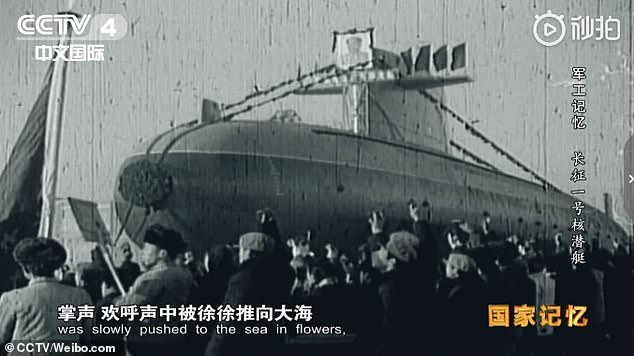 The video was released by China’s state broadcaster CCTV on its Twitter-like Weibo after U.S. media last week reported that Beijing had tested a new submarine nuclear missile that could reach North America.

The clip was a part of a programme to mark the memorable achievements in China’s military and industry since the founding of the People’s Republic of China in 1949.

It was originally broadcast in April last year and was published on Wednesday again to celebrate the 48th anniversary of the launch of Changzheng-1, which was also known as the Type 091 submarine. 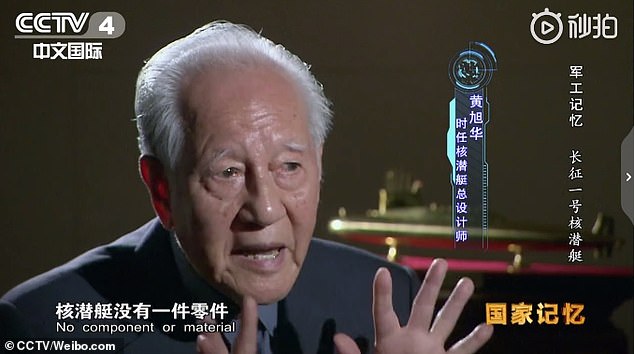 Changzheng-1’s chief designer Huang Xuhua (pictured) said in the CCTV programme: ‘No component or material of the nuclear submarine was imported from a foreign country’

A conventional submarine is equipped with diesel engines which generate electricity. The electricity then propels and powers the vessel.

In a nuclear submarine, the heat of the nuclear reactor generates steam to drive the engines which provides the warship with power.

The construction of nuclear-powered submarines became possible after compact, safe, and reliable pressurised water reactors was developed for naval use in the early 1950s, according to National Museum of American History.

The plan of the Changzheng-1 was first proposed in early 1960s. Its construction began in 1966 and Chinese engineers reportedly constructed the warship while designing it at the same time.

It was launched on December 26, 1970, and officially commissioned to the Chinese Navy on August 1, 1974 after completing several test runs. 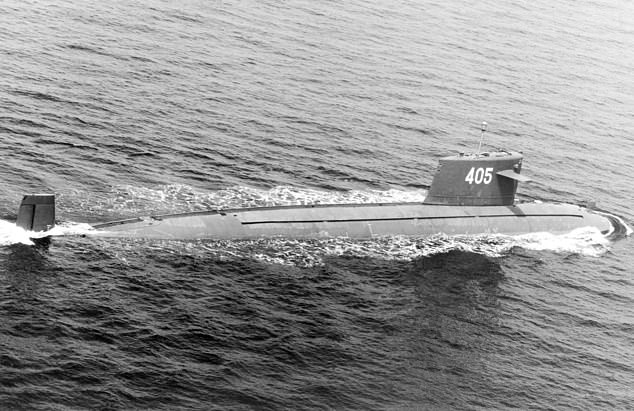 Changzheng-1, also known as the Type 091 submarine, was said to be armed with six torpedo tubes, one anti-submarine torpedo and one anti-ship torpedo. It was 322ft long and 33ft wide

The submarine measured 98 metres (322 feet) long and 10 metres (33 feet) wide with a draught of 7.5 metres (24.6 feet), reported Sohu.com. It was said to be armed with six torpedo tubes, one anti-submarine torpedo and one anti-ship torpedo.

The vessel could sail at a top speed of 12 knots on the surface of the water and 25 knots underwater.

With a displacement of 4,500 tonnes in surfaced condition or 5,500 tonnes submerged, it could reach a maximum depth of 300 metres (984 feet) under the sea.

Speaking to CCTV, Changzheng-1’s chief designer Huang Xuhua said: ‘No component or material of the nuclear submarine was imported from a foreign country. [We] manufactured all of them independently.’

He added: ‘Certainly, we paid a huge cost.’ 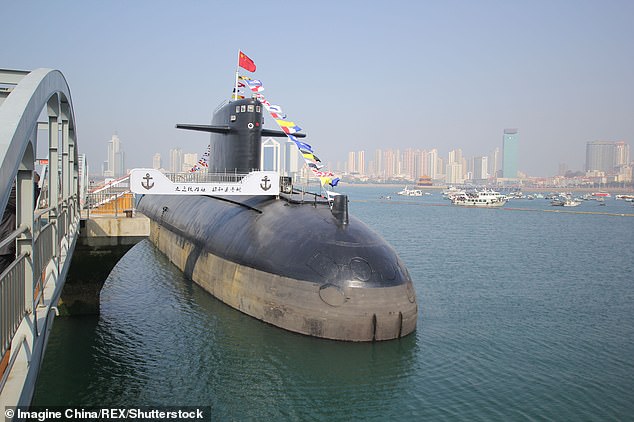 The nuclear submarine, which was de-commissioned in 2013, is now a navy museum (pictured)

The programme claimed that China spent 10 years developing and building a nuclear submarine while ‘foreign countries had spent decades’ doing the same thing.

Changzheng-1 was de-commissioned from the Chinese Navy in 2013 and it was turned into a museum, Qingdao Navy Museum, in April last year.

China’s president Xi Jinping has vowed to build a leading navy since he took the office in 2012.

In April, China held its largest-ever naval parade on the South China Sea which involved 48 warships, 76 warplanes and more than 10,000 soldiers, according to Xinhua News Agency.

While reviewing the parade, President Xi said the mission for China to build a strong naval force had never been more pressing.

The missile is said to have a full operational range of between 7,456 miles and 8,700 miles and was designed to be fired from Type 096 nuclear ballistic missile submarine, China’s next nuclear submarine.

China has never openly confirmed the development of JL-3. Chinese media have blasted the reports, calling it untruthful.