The six video clips, filmed by an infrared camera on two days, capture the baby animals following their mother through rough terrain 12,467 feet above sea level.

Experts said it was extremely rare for a hidden camera to spot four of these endangered animals at the same time.

A family of four snow leopards have been caught on camera scavenging in a snow-covered mountain. The footage was filmed in China’s Wolong National Nature Reserve last December 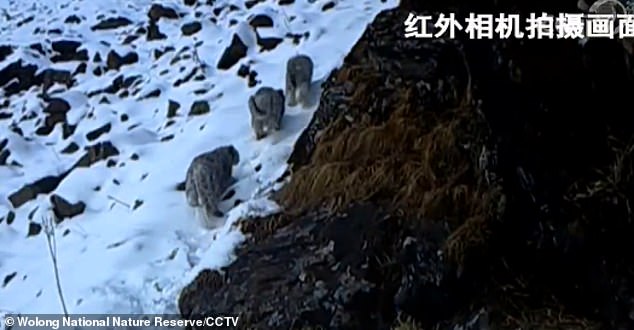 The clips show three leopard cubs learning survival skills from their mother. Experts said it was extremely rare for a hidden camera to spot four of these endangered animals at the same time

Sporting thick fur with a unique pattern of rosettes and spots, snow leopards live in cold high mountains of central and eastern Asia.

There are about 4,000 of them remaining in the wild.

Their population is shrinking due to habitat loss, poaching and the impact of climate change, according WWF which ranks the species ‘endangered’.

It was shot in the park in Sichuan Province on December 21 and 24 last year. 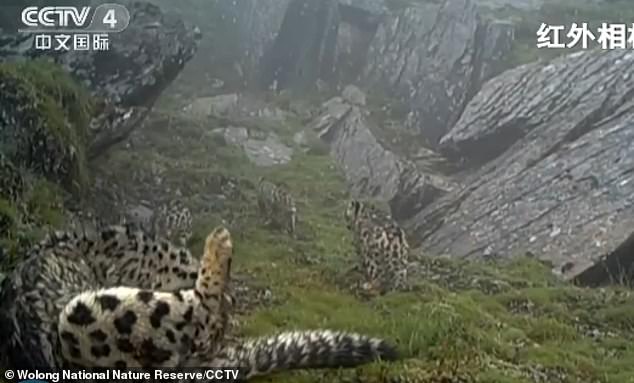 An expert from Peking University told Xinhua News Agency the cubs appeared to be one year old or so and were in an ideal stage to learn survival skills.

According to the expert, snow leopards usually give birth in a litter of two or four, therefore it is rare to see a mother leopard with three cubs.

This is the second time Wolong National Nature Reserve has caught four snow leopards in one frame.

In August 2017, another mother snow leopard was seen roaming in the area with three cubs. 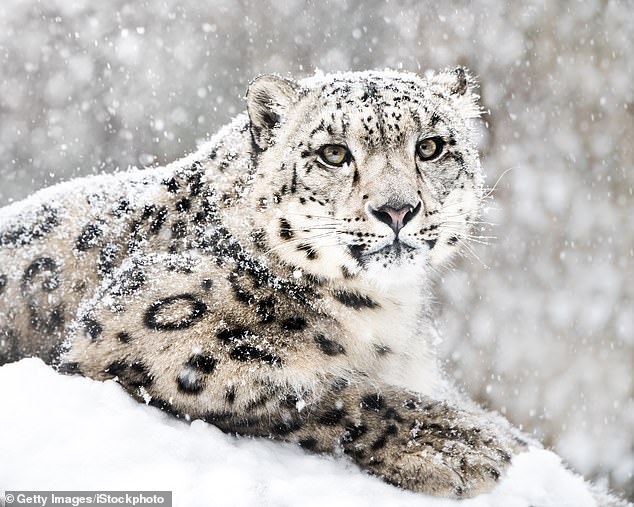 The population of wild snow leopards is shrinking due to habitat loss, poaching and the impact of climate change, according to WWF. There are currently 4,000 of them living in Asia

Snow leopards are crafty and powerful predators and can hunt without being noticed easily.

They are capable of killing animals three times their weight.

On average, an adult male snow leopard measures four to five feet in length and weighs 100 to 120 pounds.