Their skulls and blood vessels were fused together, meaning the girls shared blood supply and operating would carry huge risks.

It took painstaking planning by a team of experts including scientists and engineers using advanced technology such as virtual reality to practice the surgery.

Safa and Marwa were flown over from their home of Charsadda in Pakistan by a private donor to undergo three major operations.

They are now adjusting to life as individuals after four months recovering in hospital following their final major surgery in February.

Safa and Marwa Ullah, born craniopagus twins, have finally been separated after 50 hours of surgery at Great Ormond Street Hospital. They were discharged in July. Pictured with their mother Zainab Bibi and grandfather Mohammed Sadat 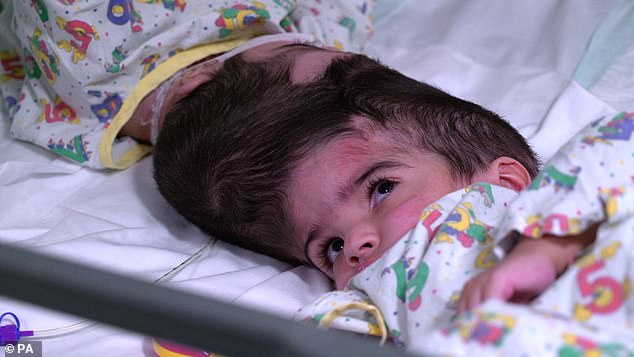 Safa and Marwa Ullah were born craniopagus twins. Their skulls and blood vessels were fused together (pictured) needing three operations 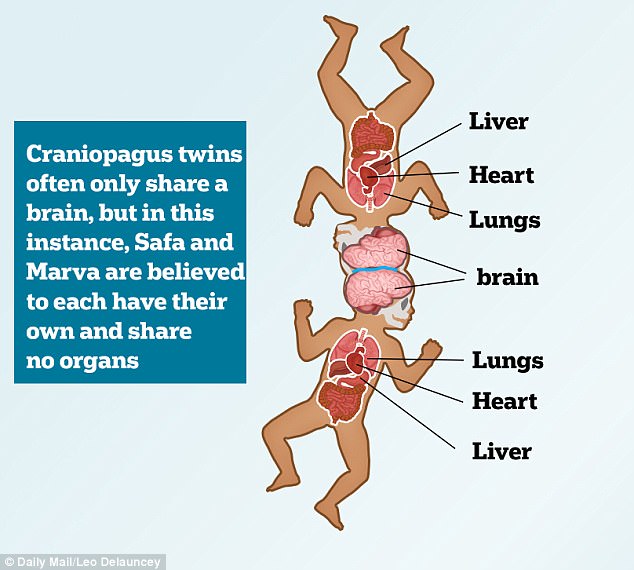 Safa and Marva are known as ‘craniopagus twins’ – a phenomenon that occurs just once in every 2.5 million births

Noor ul Owase Jeelani, a neurosurgeon at Gosh, and craniofacial surgeon Professor David Dunaway, head of the hospital’s craniofacial unit, led the team that operated on the girls.

They said in a statement: ‘Gosh really is one of the few hospitals in the world with the infrastructure and expertise to carry out a separation like this successfully.’

Gosh has previously successfully separated craniopagus twins in 2006 and 2011.

In order to ensure the operations went smoothly, experts used virtual reality to create an exact replica of the girls’ anatomy.

This enabled surgeons to visualise the complex structure of their skulls as well as the positioning of their brains and blood vessels.

HOW RARE ARE CRANIOPAGUS CONJOINED TWINS?

Craniopagus conjoined twins are babies who are connected at the top of the cranium.

This condition occurs in about 10 to 20 babies in every million births in the United States.

An estimated two to six per cent of conjoined twins are attached at the top of the head, making it the rarest form of the condition.

Overall, conjoined twins are more likely to be female.

With craniopagus twins, they are always genetically identical and share the same sex.

Few craniopagus twins survive the birth because of how they are attached.

About 40 percent are stillborn and an additional 33 percent die after birth, normally due to organ failure or abnormalities.

But 25 percent have been known to survive and even have the option to be separated depending on where they are attached at the skull.

Advances in brain imaging and neurosurgical techniques have made these separation surgeries more possible.

A team also used 3D printing to create plastic models of the structures that could be used for practice.

Cutting guides were created so that surgeons could work more precisely.

The first operation took place in October 2018, when the girls were 19 months old.

During the surgery, doctors first worked to separate the girls’ blood vessels and then inserted a piece of plastic into their heads to keep the brains and blood vessels apart.

The final major operation, which saw them finally separated, was carried out on February 11 this year, and involved medics building new skulls using the girls’ own bone.

They also used tissue expanders, which are temporary implants, to ensure the girls’ own skin would stretch over the top of each of their heads.

The surgery has been followed by several smaller procedures to enable the girls to live independent lives.

Cecelia Carney, team leader of Gosh’s neurosurgery theatre, said: ‘The intricacies of the series of surgical procedures were planned meticulously as a team.’

The operations involved 100 members of staff from Great Ormond Street.

Mother, Zainab Bibi, 34, gave birth to the conjoined twins via C-section, which affects only about one in every 2.5 million births.

She said: ‘We are indebted to the hospital and to the staff and we would like to thank them for everything they have done.

‘We are extremely excited about the future.’ 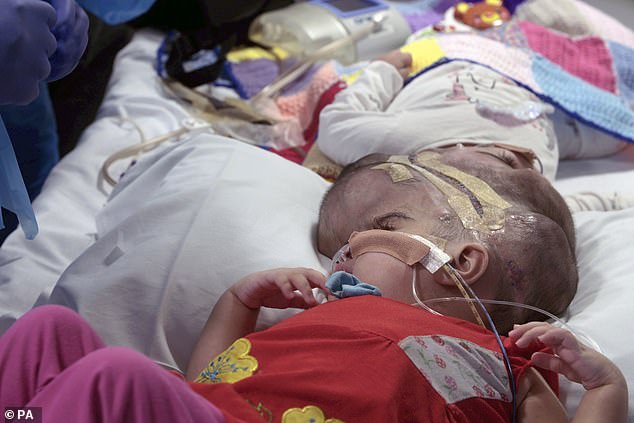 The separation took tedious planning by a team of experts including scientists and engineers using advanced technology such as virtual reality to practice because it was such a high-risk operation. Pictured in hospital after starting their surgery in October 2018 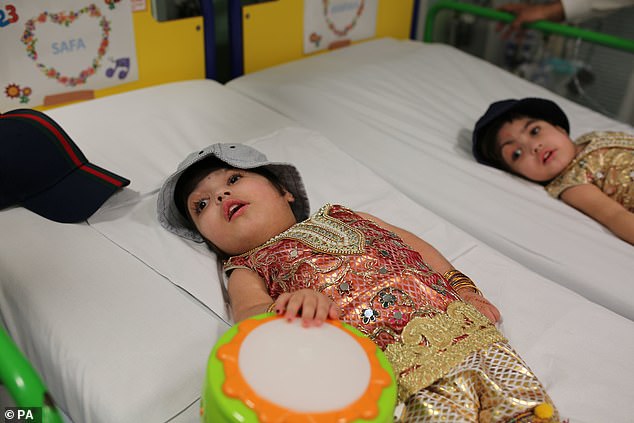 The surgery was paid for by a private donor. Mother Zainab Bibi, 34, said the family is ‘extremely excited about the future’. Pictured, the girls recovering at Gosh after separation

The girls, whose father has died, were discharged from Gosh on July 1 and moved to a London address with their mother, grandfather Mohammad Sadat, 57, and an uncle.

The twins are now undergoing daily physiotherapy as part of their ongoing rehabilitation, and it is believed they will return to Pakistan in roughly one year.

Dr Jeelani and Professor Dunaway said: ‘We are delighted we have been able to help Safa and Marwa and their family.

‘It has been a long and complex journey for them, and for the clinical team looking after them.

‘From our personal point of view, it has been great to get to know the girls and their family.

‘Their faith and determination have been so important in getting them through the challenges they have faced. We are incredibly proud of them.

‘We are also incredibly proud of the Gosh team responsible for their treatment and care over the past 10 months.

‘From the surgical teams, scientists and engineers who helped us plan and perform the operations to the paediatricians, nursing staff, physiotherapists and occupational therapists, it has been a huge team effort and every single person has played a key part in helping Safa and Marwa.’