The 1940 Helsinki Olympic Games and Pan Am flights to Rio: Rare vintage posters spanning 100 years go up for sale, with some expected to fetch £2,500

What do muscular Olympic athletes, scantily-clad holidaymakers and sketches of far-flung destinations have in common?

They are all themes highlighted in an upcoming sale of vintage posters, which will take place on August 7 at the Swann Auction Galleries in New York.

There are more than 500 lot items spanning 100 years, with categories including travel, sport, airlines and automobiles.

One of the earliest travel-orientated posters is one dated to 1898, promoting the golden sands at Plage de Westende on the Belgium coast as an ideal family spot. It is estimated to fetch up to $2,000 (£1,645).

Another intriguing poster shows a muscular discus thrower. The flyer, created to celebrate the 1938 Bolivarian Games in the Colombian city of Bogota, is tipped to go for as much as $3,000 (£2,468).

Scroll down for a taste of tourism back in the day… 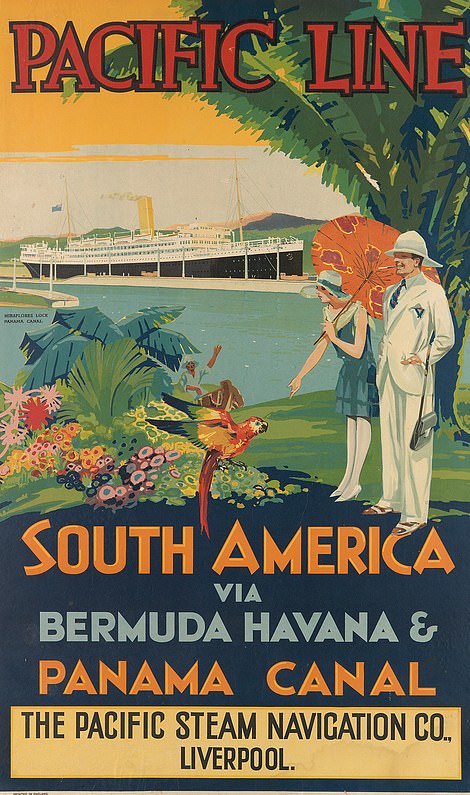 A 1954 Pan American poster promotes the Caribbean islands as a holiday destination, left, and right, a 1930s advert for steam boat rides touring around South America via Bermuda, Havana and the Panama Canal 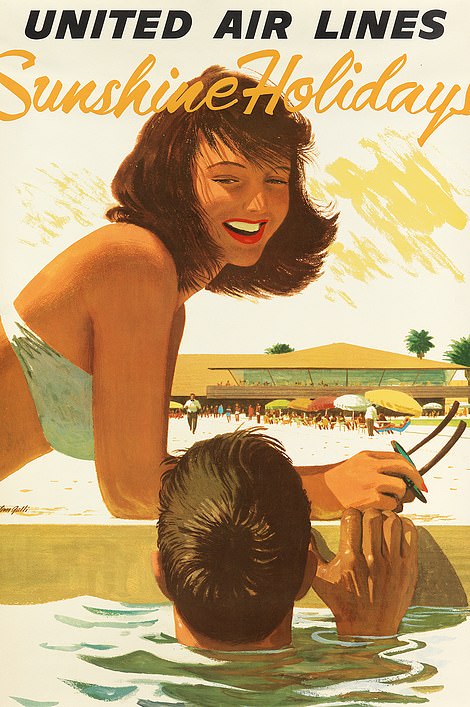 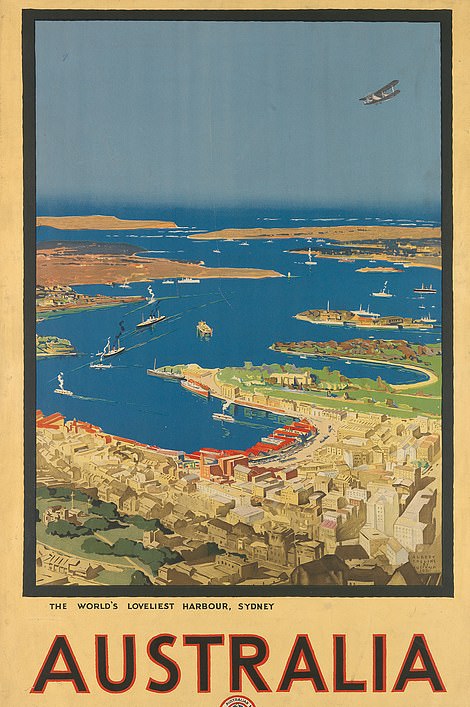 An advert for United Airlines from the 1960s shows a couple having fun in the sun, left, and right, Sydney is described as having the ‘world’s loveliest harbour’ in this poster dated to 1930 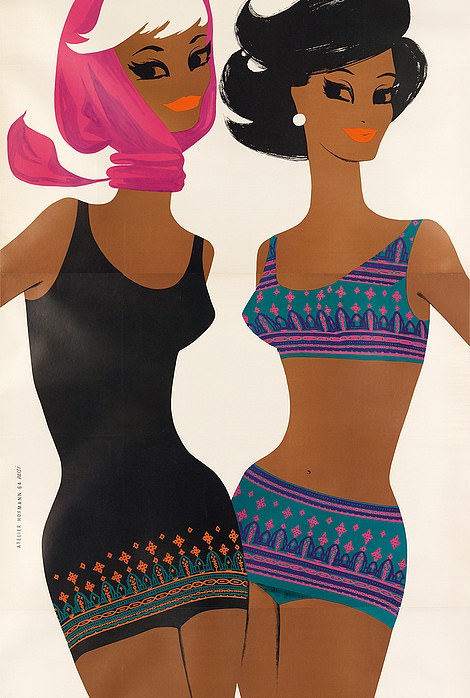 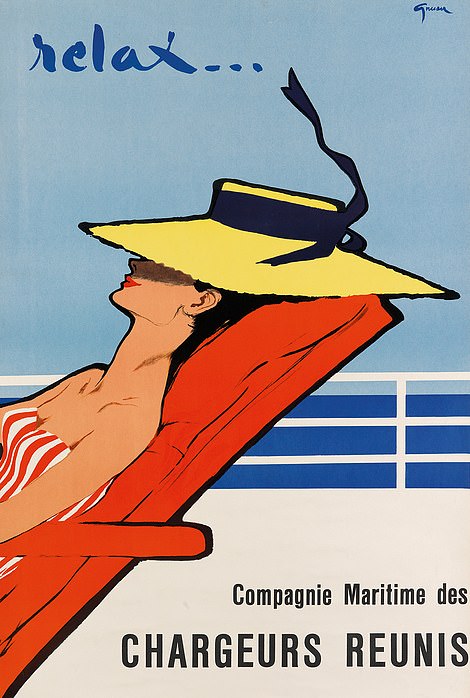 An advert for Atelier Hofmann showcasing the bathing suits that were in vogue in 1964, left, and right, a poster for the Maritime Company of United Shippers from the 1950s 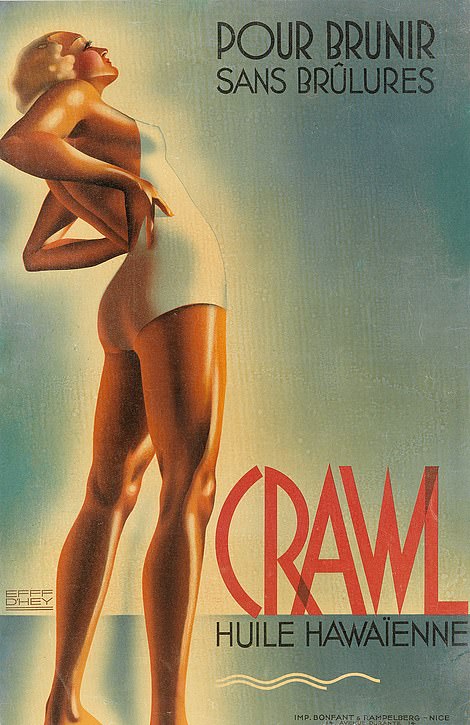 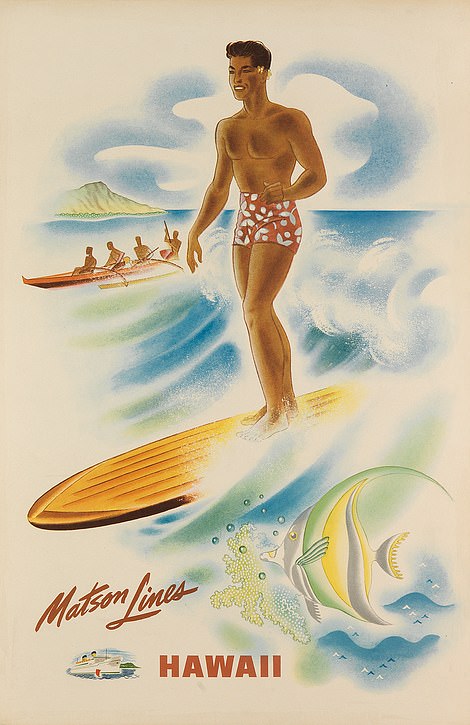 Hawaii, with its surfing and Hula girls, proved another rich seam for invention. Left, a poster advertising suncream and right, the Matson Lines shipping company 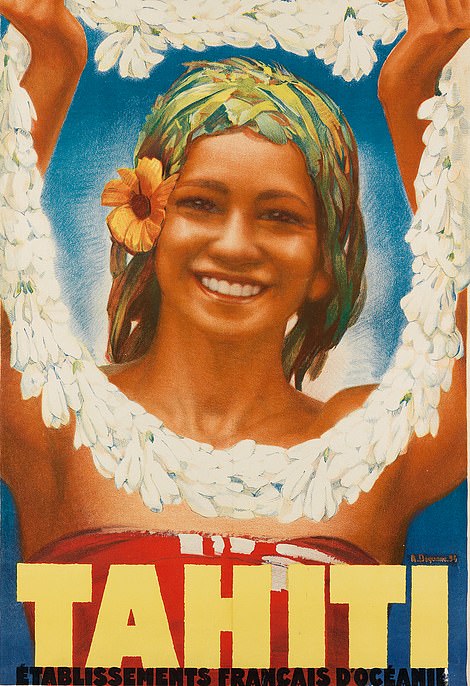 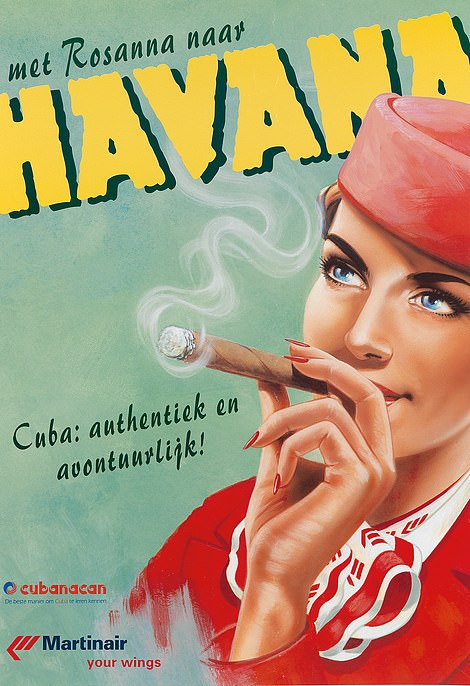 A 1934 advert intended to lure tourists to Tahiti, left, and right, a Cuban cigar-smoking flight attendant of the 2000s 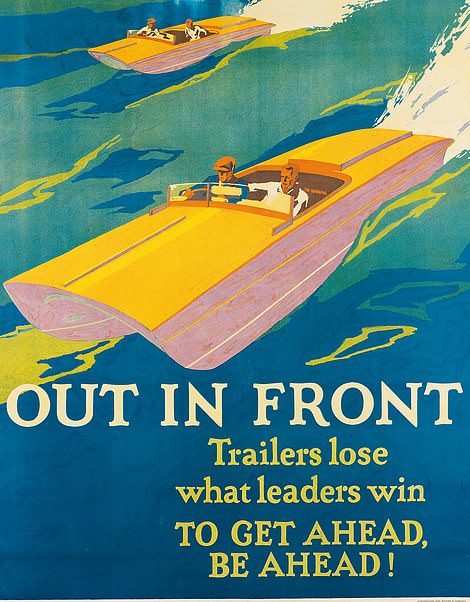 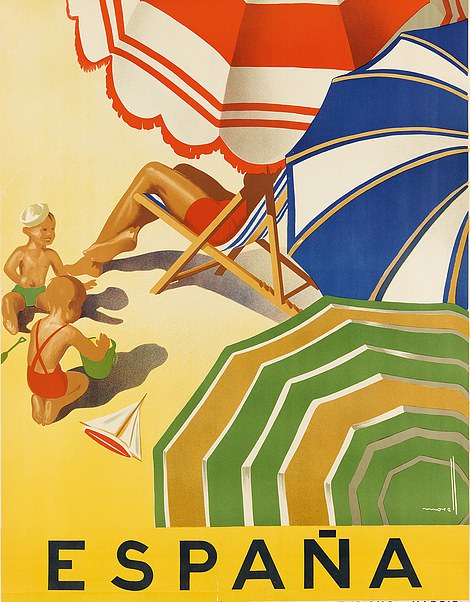 A sporting poster by an unknown artist for Mather & Company of Chicago in 1929 shows a pair of racing speedboats, left, and right, a poster circa 1939 promoting Spain as a destination 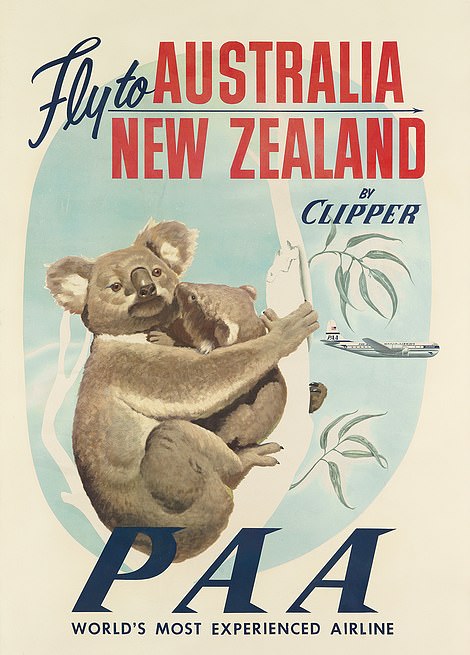 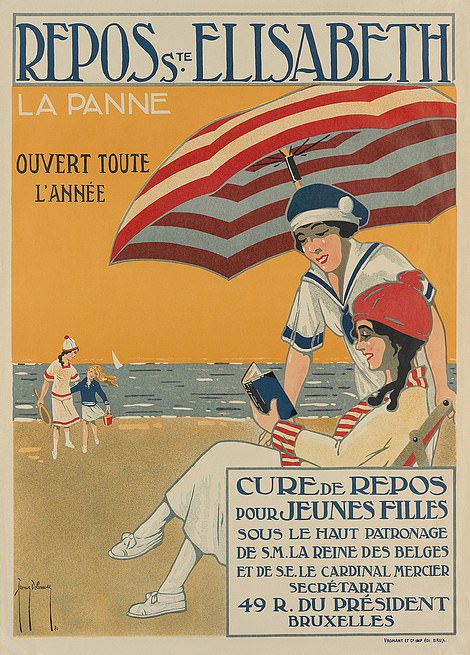 A Pan Am poster circa 1950 promoting Australia and New Zealand as flight destinations, left, and right, a poster from 1920 titled Repos Ste Elisabeth by Francis Delamare 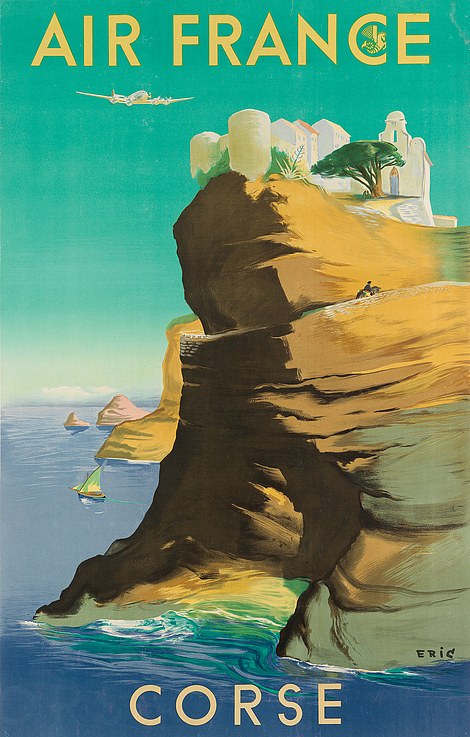 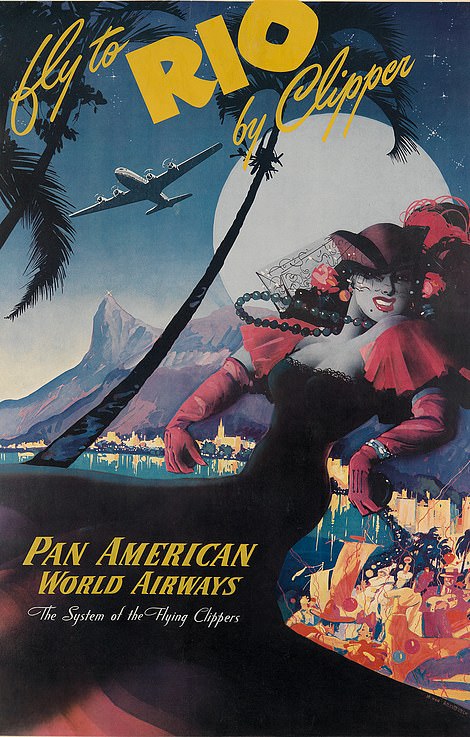 An Air France poster from 1949 highlighting the beauty of Corsica, left,  and right, a circa 1947 design by the mysterious Mark von Arenburg for Pan American World Airways 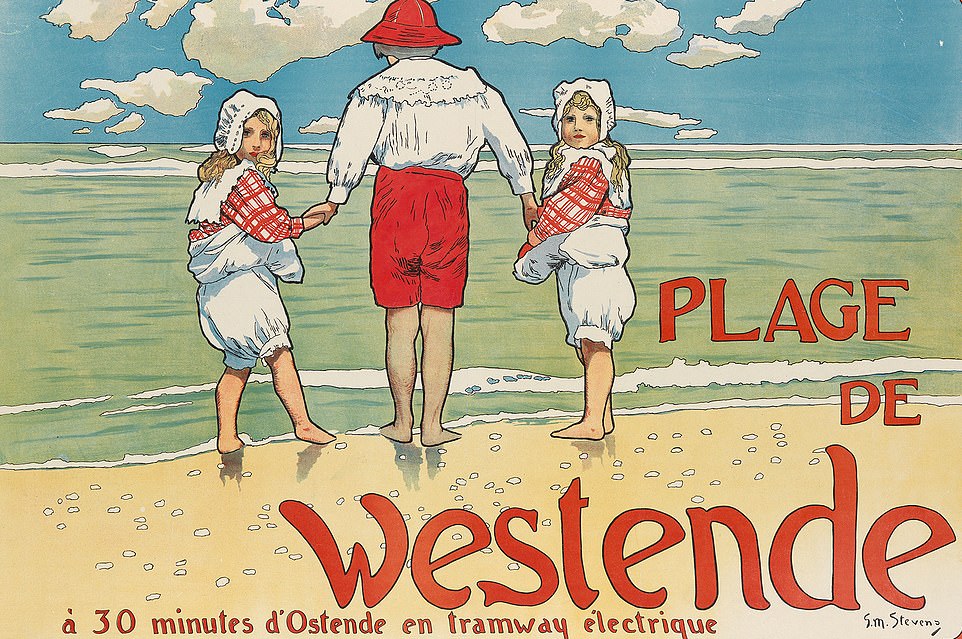 Among the more scarce and valuable examples at $1,500 to $2,000 is one of the earliest, Plage de Westende, 1898, by Gustave-Max Stevens, an artist who made his mark with Art Nouveau works, but here displays his talent for graphic design with a view of twins holding their older brother’s hand as they paddle in the waters of Westende on the Belgian coast 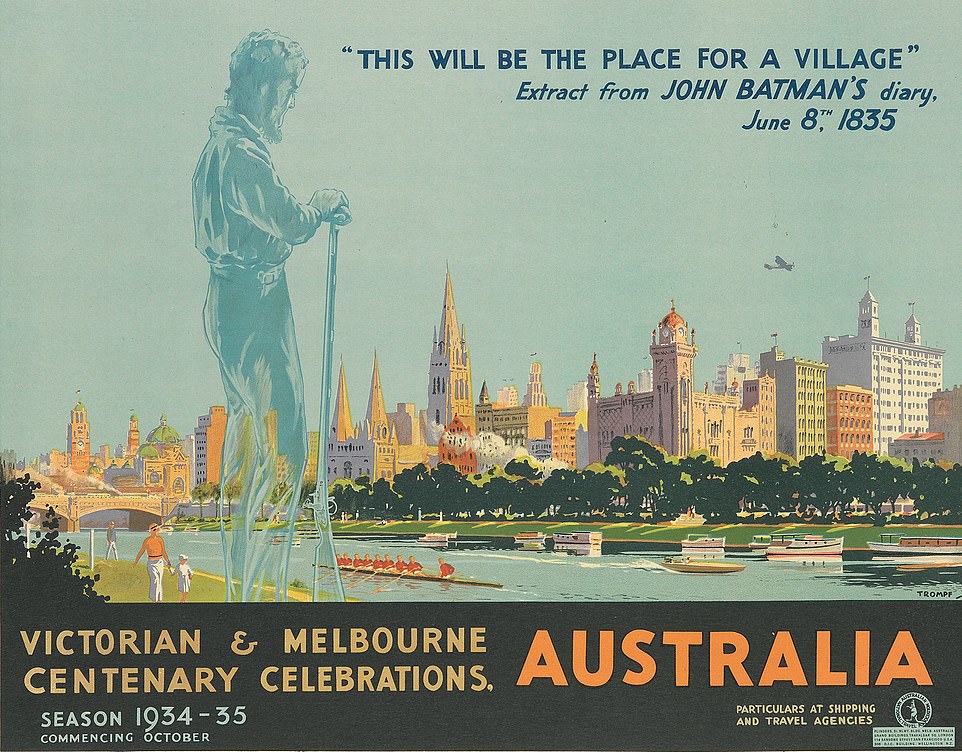 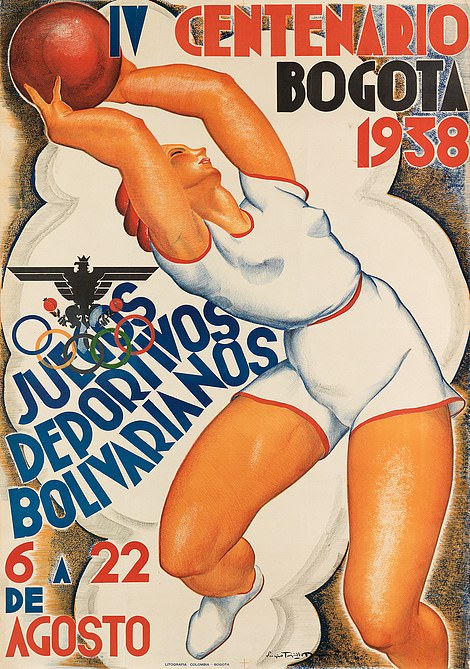 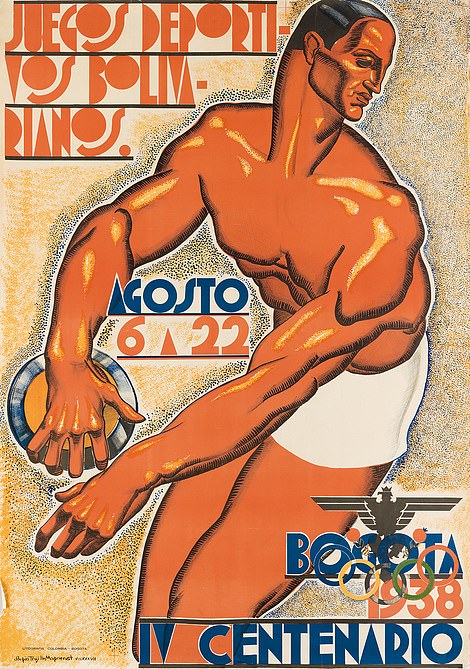 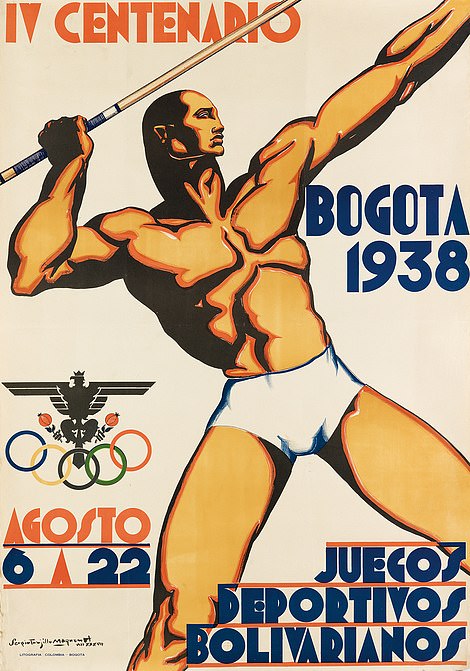 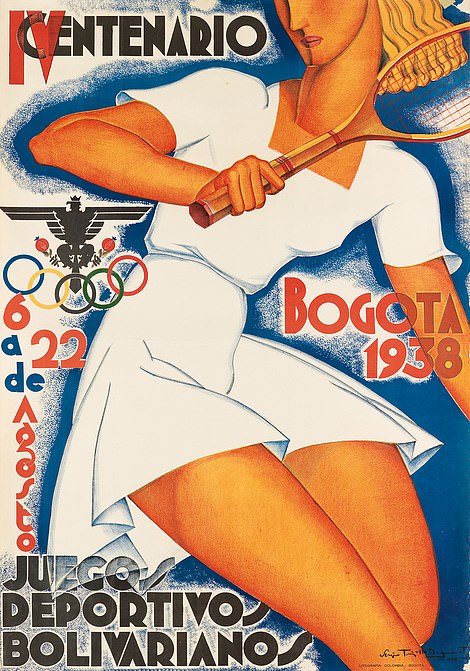 These posters provide rare, colourful and dynamic views of sportsmen and women at the time. Artist Sergio Trujillo Magnenat went on to be one of the most important figures to emerge in Latin American art during the 20th century 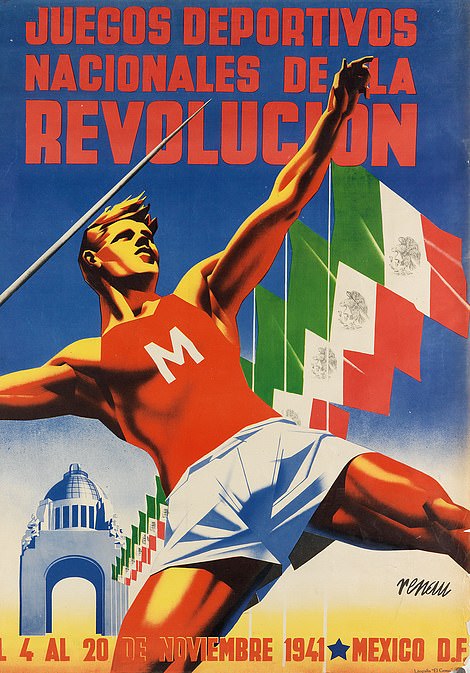 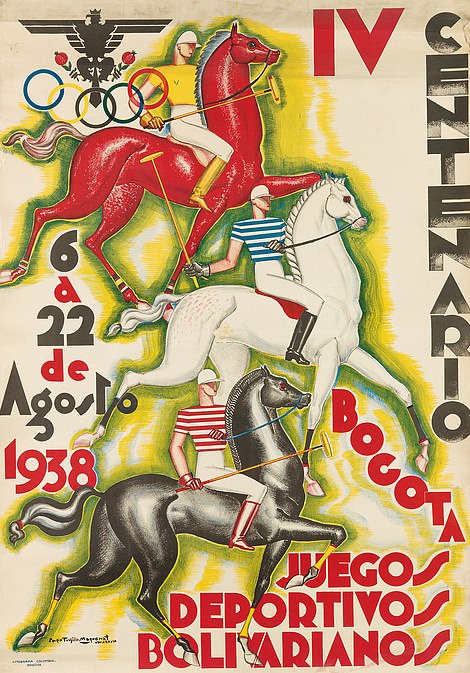 A major sporting tournament influenced by politics, the 1941 Revolutionary Games in Mexico is advertised on the left. Right, Trujillo Magnenat’s bold designs from the 1938 Bolivarian Games drew from Italian Futurism