Alia Scott, who initially mistook the symptoms for hayfever, is carpeted in hives so severe they scar and bruise and she has been unable to have hot showers over the last year.

The 21-year-old, from Waikato, New Zealand, first woke covered in a the eruption of painful and itchy bumps in March last year.

One of her neighbours had just mown their grass, so the hayfever sufferer assumed she had experienced a flare-up. 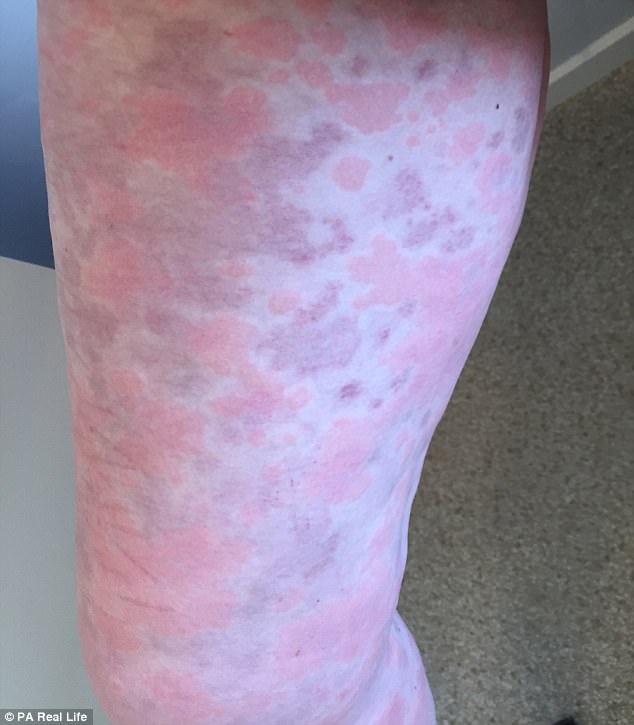 The rash initially disappeared when she took antihistamines, but returned with a vengeance.

Ms Scott said: ‘I’ve been left bruised and scarred by my hives.

‘I haven’t had a hot shower since last year, because it’s such a constant battle to keep my body temperature down.

‘People see a skin condition like this and assume it’s a simple, itchy, allergic reaction – but it’s so much more than that.

‘I can only wash in freezing water. My skin feels permanently sunburnt.’

She was diagnosed with chronic idiopathic urticaria (CIU) – a condition where hives appear daily, sometimes for months or years, with no known cause. 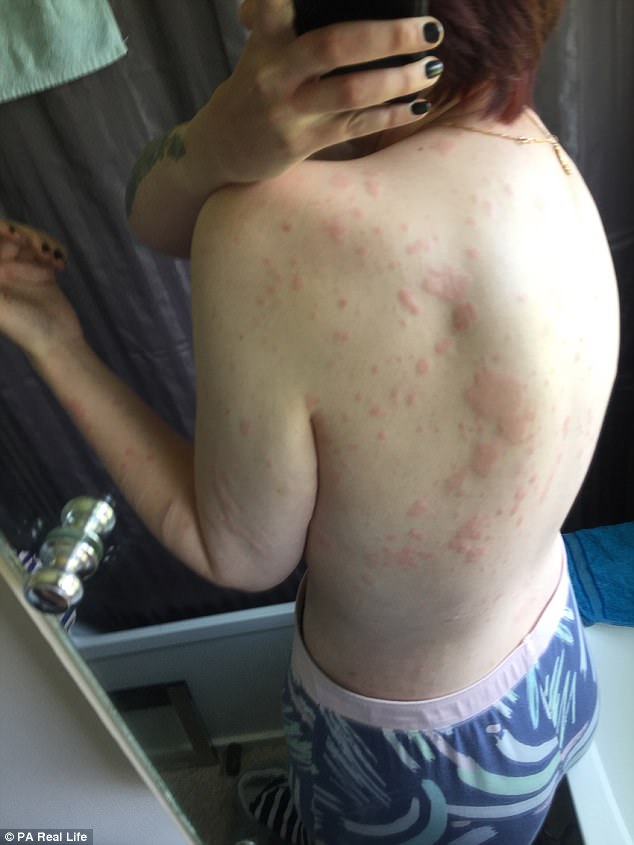 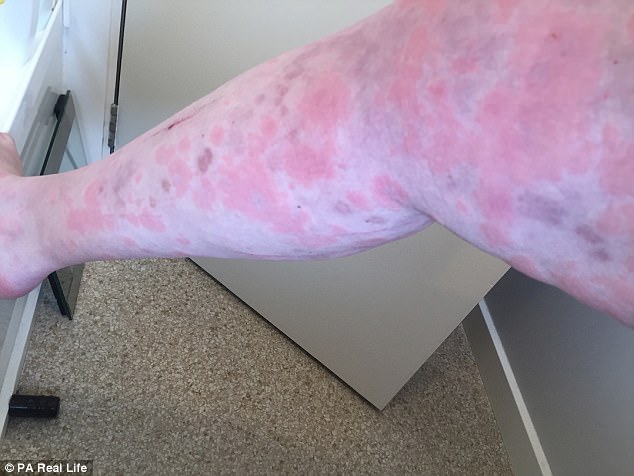 WHAT IS CHRONIC IDIOPATHIC URTICARIA?

The welts vary in size and appear and fade repeatedly as the reaction runs its course.

Chronic hives are a condition in which the welts last more than six weeks or recur over months or years.

But the condition can be very uncomfortable and interfere with sleep and daily activities.

For many people, antihistamines and anti-itch medications provide relief – but others like Miss Scott find it difficult to control the symptoms.

Often, the cause of chronic hives is not clear.

In some cases, chronic hives are a sign of an underlying health problem, such as thyroid disease or lupus.

Within days of her first outbreak – still under the misapprehension that it was hayfever – her lips and eyelids began to swell, and she struggled to breathe.

Rushing to a doctor, she was prescribed antihistamines, which initially worked.

Then, in September 2017, the rash returned worse than ever.

‘It just wouldn’t go away. It was everywhere – from my scalp to my toes. It sprang up so quickly I could literally see it happening before my eyes,’ she said.

Since then, Miss Scott has tried various different anti-allergy drugs – but nothing seems to stave off the hives for long.

Now, as she waits for a referral to see a dermatologist and immunologist, it is worse than ever– sometimes leaving her physically bruised.

‘It’s so itchy that I used to scratch it in my sleep, which would then make it bleed. Once, it even got infected and the rash began to weep pus,’ she said.

‘I’ve had to cut my nails really short, to make sure that doesn’t happen again. I used to love manicures and nail art, but I can’t do that anymore.’ 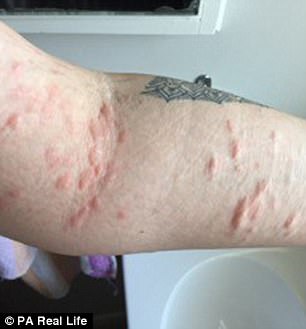 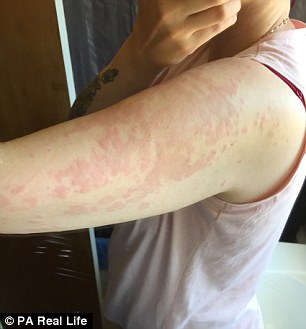 Miss Scott is covered by the unsightly, agonising rash from scalp to toe

Despite being classed as ‘idiopathic,’ meaning the cause is spontaneous or unknown, Miss Scott finds hot temperatures a huge trigger.

As a result, she has to wear loose fitting clothing and makes sure she does not stay in the sun for long.

‘Last year, I was looking forward to summer so much, but when it finally came, I spent most of it bedbound.

‘My condition also causes huge swelling in my feet, which gets so bad I can’t walk ,so any tight shoes, like heels, are also out.’ 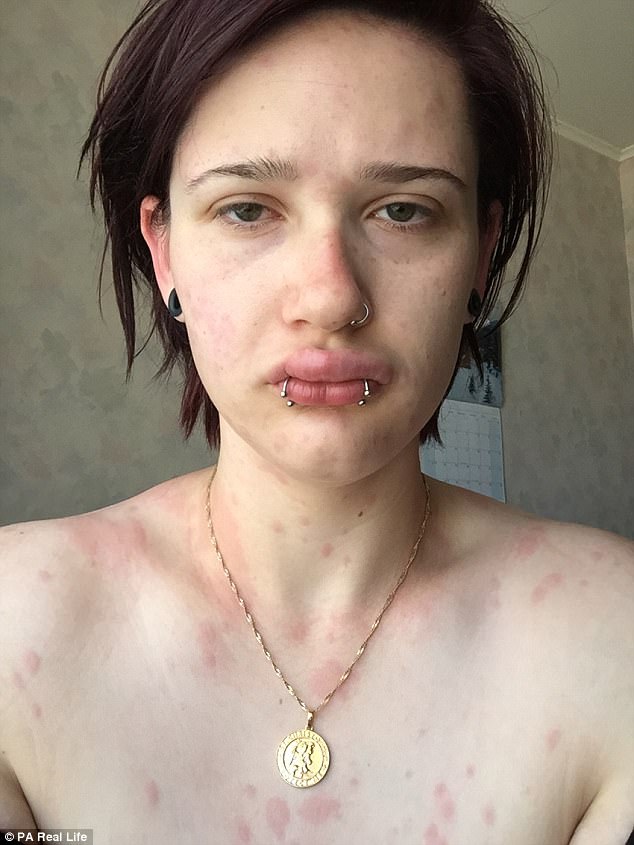 At its most severest, her skin can get infected and the rash began to weep pus

Miss Scott admitted that CIU has not only left her physically scarred, but mentally, too.

She continued: ‘When it’s at its worst, I don’t leave the house. It spreads all over my face and makes me very self-conscious.

‘It’s incredibly isolating. I used to be a really social person, but I’m just so sick of how constant this is.

‘The worry of it all has affected my sleep hugely, so I often feel fatigued.

‘I fret that it’ll never go away and I’ll be like this for life, or that I’ll find something that does work, but isn’t covered by the government, so I won’t be able to afford it.’

Currently on a double dosage of antihistamines while she waits for more tests, Miss Scott hopes that by sharing her story she will help others understand what it is like to live with a chronic condition.

She added: ‘People struggle to believe that this kind of thing can come on out of the blue and it’s not due to something I’ve done.