The rate of coronavirus infection in England was significantly reduced before lockdown restrictions were lifted, a government study has found.

More than 120,000 volunteers were tested across England in the month of May as part of the country’s largest coronavirus surveillance study.

Every infected person was passing the virus on to 0.57 people during May, just before schools and shops re-opened, the results show.

The finding is significantly lower than what was estimated by the Government at the time — between 0.7 and one — and proves the lockdown was effective at curbing the spread of the virus.

The reproduction rate — the average number of people each Covid-19 patient infects — was expected to be 2.4 before lockdown started.

The research, run by Imperial College London, also gives an insight into who was more likely to catch the coronavirus in May.

Young adults aged between 18 and 24, people of Asian ethnicity, and care home workers were most likely to test positive for Covid-19.

The study swabbed 120,610 people over the age of five from a ‘a nationally representative sample of the population’. Some 159 were positive meaning 0.13 per cent of the population were infected in May. The variances over England are pictured 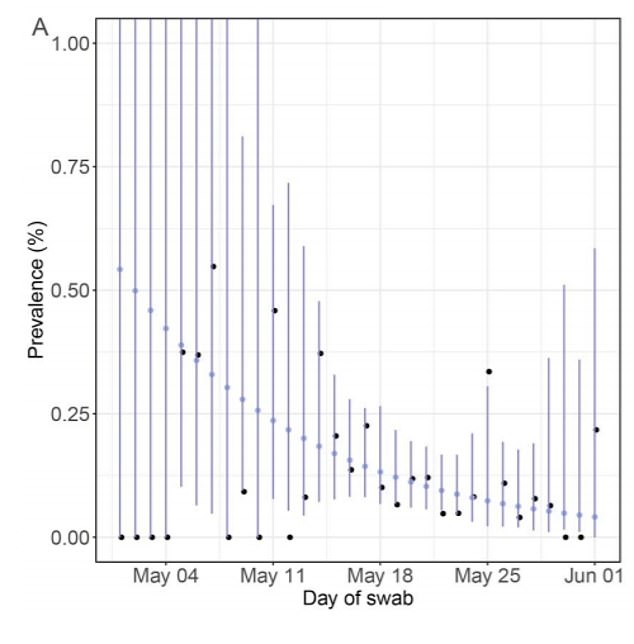 Health Secretary Matt Hancock said the study, which has been repeated in June, is crucial to the country’s ongoing battle with coronavirus.

‘This ambitious testing programme will help us better understand the spread of the virus to date, predict how it may spread in the future and inform our response to the pandemic,’ he said.

‘It shows the impact our national lockdown efforts have had and demonstrates that we have taken the right actions at the right time.’

A number lower than one means the outbreak will run out of steam and be forced to an end.

This is because the infectious disease will quickly run out of new victims to strike.

HOW DOES A LOCKDOWN BRING DOWN THE R0?

Scientists at the London School of Hygiene and Tropical Medicine last month analysed the virus in the UK.

They estimated each infected patient may now only be passing COVID-19 on to 0.62 others, down from 2.6.

The team said the virus was struggling to spread because people were having less contact with others.

They used a survey of 1,300 people who were asked to list what human contact they had in the past 24 hours.

This was compared to a similar survey done in 2005 to give an idea of how it had changed because of lockdown.

Although he noted the country had taken ‘great strides towards beating this virus’, we ‘mustn’t take our foot off the pedal’.

The study swabbed 120,610 people over the age of five from a ‘a nationally representative sample of the population’.

Some 159 were positive meaning 0.13 per cent of the population were infected in May.

Prevalence of the infection was highest in London, up to 0.2 per cent of the population, followed by the West Midlands. It was lowest in the South West at 0.06 per cent, evident by the regions drastically lower cases and deaths.

Imperial’s research showed infections decreased over May, with the infection rate halving every eight to nine days.

The estimates are different to those made by the Office for National Statistics, which swabbed a lower number of 14,599 people in 7,054 households across the country.

It also estimated the reproduction rate of the virus between 0.7 and 1, meaning every infected person passes the disease on to seven and 10 others, on average.

Calculations can vary between scientific groups depending on how many people they swab and when.

Imperial College London showed about 69 per cent of those who tested positive reported no symptoms on the day of the test or the previous week, though they may have developed symptoms later.

The report provides an insight into who was infected with the virus between May 1 and June 1, comparing geography, age, sex, ethnicity, key worker status and symptoms.

Beyond the diminished rate of infection, the research found young adults aged 18 to 24 were more likely to test positive than other age groups.

‘Young adults appear to have maintained higher levels of social contact than other age groups during the lockdown period in England, while older age groups may have effectively shielded,’ the authors wrote in their pre-print paper.

This reinforced the need for this age group to adhere to social distancing measures to protect vulnerable friends and family, the press release from the Department of Health said.

Those who were over 65 years were the least likely to test positive. But the risks to them if they do are far greater, with a higher likelihood of severe illness and potentially death.

People of Asian ethnicity, predominantly South Asian in this study cohort, were almost twice as likely to test positive than those of white ethnicity.

The finding is in line with mounting evidence that Black, Asian and minority ethnic groups (BAME) are being hit hardest by Covid-19.

South Asians are 20 per cent more likely to die of after being admitted to hospital than white people, according to findings from University of Edinburgh last month.

The prevalence of infection across in England was highest among care home workers, 0.71 per cent, followed by health care workers 0.47 per cent.

Both types of roles involve high exposure to the coronavirus. And studies suggest healthcare workers from BAME backgrounds are twice as likely to catch coronavirus.

The report also showed anyone who had recent contact with a known Covid-19 case was 24 times more likely to test positive than those with no such contact.

It emphasises the importance of contact tracing — seeking anyone who has been in close proximity to a positive Covid-19 case — in keeping the spread of the virus under control.

The study will now undergo peer review before a final report is published, according to the Department of Health.

Plans are currently underway for a second large-scale study, which will use antibody tests to determine how much of the general public has been infected with Covid-19 in the past.

Professor Paul Elliott, FMedSci, director of the programme at Imperial College London, said: ‘Community testing is a vital step in ongoing efforts to mitigate the pandemic, but to be successful this must be based on robust scientific evidence and sound statistics. T

‘Through this surveillance programme with DHSC and Ipsos MORI we’re gathering the critical knowledge base necessary to underpin community testing and facilitate a greater understanding of the prevalence of Covid-19 in every corner of England.’