Rates of ER visits for fevers among infants dropped dramatically during the COVID-19 pandemic, a new study finds.

Montreal-based researchers conducted a study on rates of fever among babies 90 days or younger.

Their goal was to find whether the overall drop in cases of the flu across the world last year affected the youngest of society.

While they did find cases than expected, cases that did appear were more serious than in previous years.

The number of babies who were examined by ER doctors for fevers declined by 66 percent last year amid the pandemic.

But among infants who did visit the hospital for high temperatures, doctors found rates of serious bacterial infection (SBI) doubled from previous years.

The research matches a trend across all ages, where people were less likely to contract viruses that were not COVID last year due to masking and distancing reducing transmission.

While cases of fevers among babies fell during the pandemic, twice the amount of babies that did have a fever did so because of a serious bacterial infection

For the study, published in JAMA Network Open, the researchers looked at pediatric data from across Quebec, Canada.

The collected testing data for infants 90 days or younger from March 2018 to March 2020.

The first two years of the study were to be used as a control group, with the third taking place during the pandemic.

In previous years, over 950 babies went to an emergency department with a fever – a 63 percent drop.

Cases of the fever that did cause emergency visits were more likely to be caused by SBI, though.

Only 10 percent of cases from the previous two years were an SBI, compared to 20 percent positive fever cases during the pandemic.

Researchers, who published their findings in JAMA on Tuesday, are not exactly sure what the reason for this jump is. 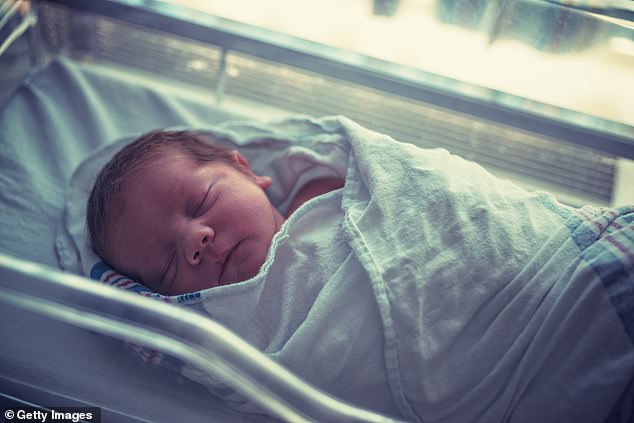 Babies, like people of all ages, were less likely to get sick during the pandemic last year

They also believe that the relatively limited sample size, only using data from one part of Canada, means this data may not be totally representative.

The most common cause of fevers in people of all ages is the flu, but the common respiratory condition all but disappeared last year.

Cases of the flu across all age groups fell dramatically during the COVID-19 pandemic, as masking and social distancing guidelines made it hard for the virus to spread.

Data from a hospital in Detroit finds that cases of Influenza A and B among both children and adults fell to near zero last year.

Researchers from the University of Wisconsin also found that cases of the flu in their hospital system fell by 99 percent.

Now with masking and social distancing being dropped, though, some experts fear that the flu may storm back this year, as people have not built immunities to the virus in over a year.