The rate of serious injuries suffered by factory workers at Amazon warehouses is more than double the national average, a devastating new report shows.

Records from 23 of the online retail giant’s 110 fulfillment centers across the United States show that there were 9.6 serious injuries per 100 full-time workers in 2018.

That’s more than double the warehouse industry average of four in 100.

Workers report urinary tract infections from ‘holding their pee’ to avoid taking time to go to the bathroom, severe back problems and chronic pain from packing at such fast rates, according to The Atlantic.

The body of one employee was even left for two hours after he was crushed by machinery in 2017, the website reports.

Records from 23 of the online retail giant’s 110 fulfillment centers across the United States show that there were 9.6 serious injuries per 100 full-time workers in 2018. That’s more than double the industry average of four in 100 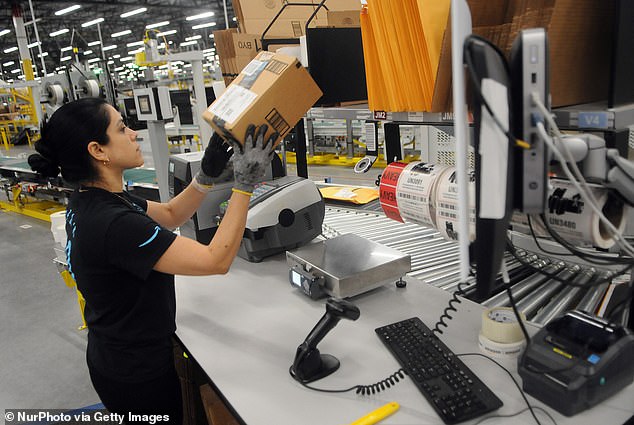 Workers report urinary tract infections from ‘holding their pee’, severe back problems and chronic pain from packing at such fast rates. Stock image of a worker in Orlando, Florida

Athena says they are ‘joining together to stop its [Amazon] growing, powerful grip over our society and economy’. Coalition member Barry Lynn said: ‘This is grass-roots democracy. There’s no money in it. Just people.’

Open Society Foundations, founded by Soros, is said to be giving some of the seed funding for Athena, The New York Times reports.

Professor David Michaels, the former head of the federal Occupational Safety and Health Administration, said: ‘According to Amazon’s own records, the risk of work injuries at fulfillment centers is alarmingly, unacceptably high.

‘Amazon needs to take a hard look at the facilities where so many workers are being hurt and either redesign the work processes, replace the top managers, or both, because serious-injury rates this high should not be acceptable to any employer.’ 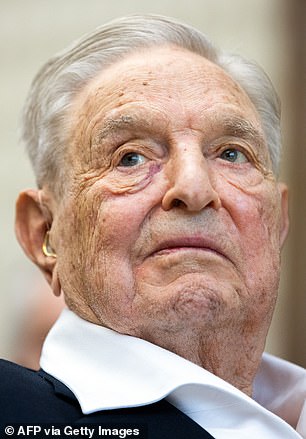 Amazon said: ‘We know that by making a conservative choice to not place an injured associate back into a job, we are elevating restricted and lost time rates as a company, but with the intent to benefit the associate.

‘Amazon took the decision to shift to a fully transparent reporting model as we would rather over-report and lead in this space for our associates’ safety than optimize for optics.’

They say injuries go up during peak times because the company employs more people during those periods.

But after a gas leak on New Year’s Day 2019 in the Eastvale, California factory workers claim they were told it would count as personal time off if they wanted to leave, despite many suffering from dizziness and vomiting.

Employee Christina Van Vorce said: ‘It was all about numbers. They didn’t want to stop production.’

Worker Kristi Shrum said: ‘You have to hold your pee or not make your rate. Which one you want to do? I had to make my rate.’

In Indiana, one employee, maintenance worker 59-year-old Phillip Lee Terry, was crushed to death by a forklift. His body was not found for two hours, The Atlantic reports.

An official report found Amazon had met the requirements of an ‘unpreventable employee misconduct defense’ but his son Zach said it ‘wasn’t an accident’ and there is a suggestion Terry was not properly trained.

Disabled veteran Parker Knight says he received a written warning for hitting 98.45 percent of his quota.

An Amazon spokesman said: ‘We measure actual performance against those expectations. Associate performance is measured and evaluated over a long period of time—at least six weeks—as we know a variety of things could impact the ability to meet expectations in any given day or hour.’ 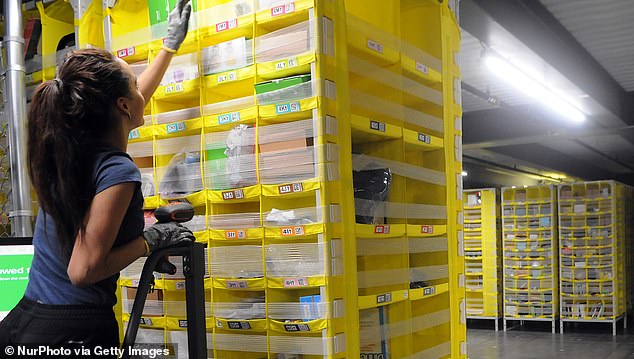 A worker picks items from a mobile shelving unit called a pod at the newest Amazon Robotics fulfillment center in Orlando in April. A report by Economic Roundtable looks at the cost to the ‘struggling working class’ communities living near and working at its warehouses

Their center in Kent, Washington recorded a rate of about 13 serious injuries per 100 workers in 2016.

The speed at which workers are forced to package goods, often at hundreds of items an hour, also means they suffer with chronic pain.

Candice Dixon, 54, told The Atlantic working at the center in Eastvale, California left her with severe back problems.

She said: ‘I’m still too young to feel like I’m 90 years old. I don’t even know how I’m going to make it in a couple of months.

‘For Amazon, all they care about is getting the job done and getting it out fast and not realizing how it’s affecting us and our own bodies.’

Reported rates of injury at the Eastvale factory, where Dixon worked, is said to be more than four times the industry average.

Now a report by research group Economic Roundtable looks at the cost to the ‘struggling working class’ communities living near and working at its warehouses.

It finds ‘public infrastructure and local communities bear the financial and environmental costs of trucking goods from ports to warehouses to consumers’.

The report adds: ‘Truck routes from ports to warehouses traverse low-income communities of color, adversely affecting air quality and health in those communities.’

It says Amazon’s ‘intense, demanding corporate culture’ has benefited those at the top – but argues it has not helped those ‘who do the heavy lifting’. 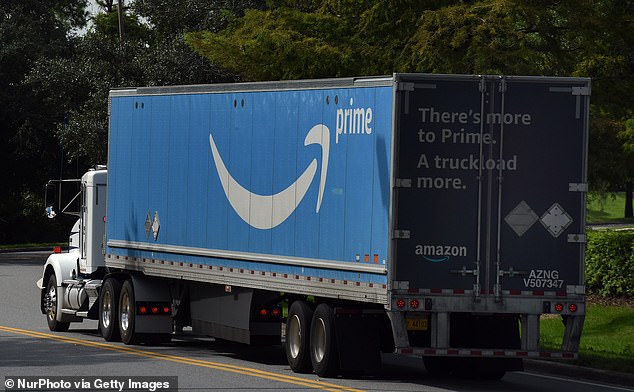 ‘It is time for Amazon to come of age and pay its own way. This means paying its full costs to the communities that host it and the workers who create its profits.’