Experts have found rates of the memory-robbing disorder are up to 11 times lower among the indigenous Tsimane community, compared to westerners.

The Tsimane, said to have the healthiest hearts ever studied, live deep in the Bolivian jungle and traditionally hunt and forage for food, using poisonous vines and bow and arrows. Their diets are low in levels of fat and sugar.

The hunter-gatherer Tsimane and Moseten communities in the Bolivian Amazon have dementia rates that are 11 times lower than in the US, a study claimed today 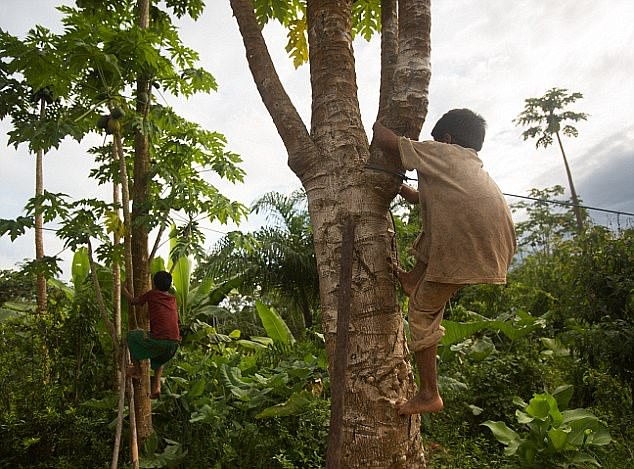 The tribe of more than 16,000 are extremely active in their day-to-day lives with hunting and fishing, and eat a diet low in fats and sugars. Pictured: A Tsimane child climbs a tree in search of a coconut 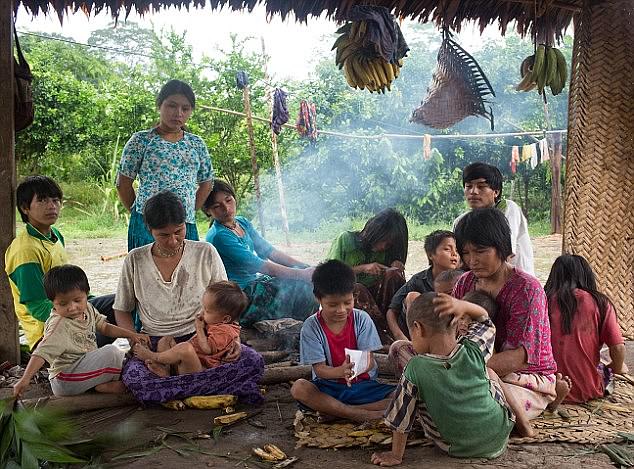 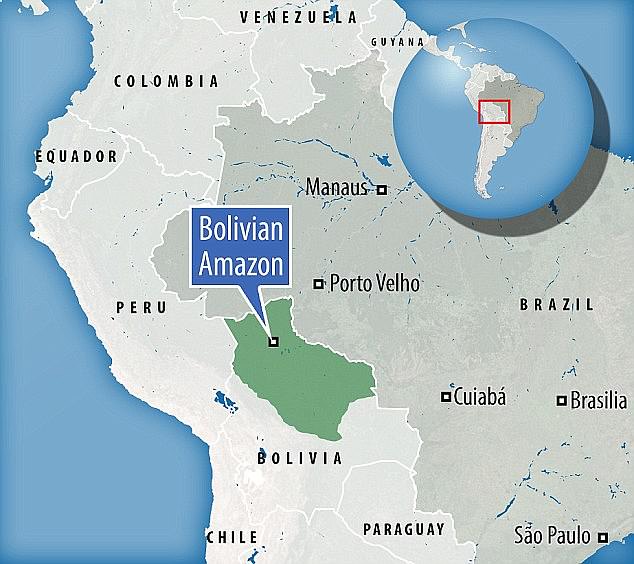 The Tsimane is a tribe of around 16,000 people living along the banks of the Maniqui River in the Bolivian Amazon

WHY DO THE TSIMANE PEOPLE HAVE THE ‘HEALTHIEST HEARTS’?

The University of New Mexico, which conducted a 2017 study, reported that the Tsimane had better cardiovascular health than ever has been measured in any other population.

More than 700 people aged over 40 from the Tsimane population were involved in the study.

Scientists found that almost nine out of ten participants had clear arteries showing no risk of heart disease.

Almost two thirds of people aged over 75 were nearly risk free and just eight per cent had a moderate-to-high risk level.

One 80-year-old had arteries resembling those of Americans in their mid-fifties.

The people have extremely healthy arteries thanks to their active lifestyle.

Professor Hillard Kaplan, who led the study, said: ‘Their lifestyle suggests that a diet low in saturated fats and high in non-processed fibre-rich carbohydrates, along with wild game and fish, not smoking and being active throughout the day could help prevent hardening in the arteries of the heart.’

‘Our prior work showed that the Tsimane have the healthiest hearts ever studied,’ senior author Professor Michael Gurven, said.

Scientists analysed dementia rates in over-60s in the Tsimane community and neighbouring Moseten tribe — located just along the Maniqui river.

They used CT brain scans and neurological tests to see if any of the volunteers had dementia or any other sign of brain decline.

Researchers also gave tribe members questionnaires, facilitated by translators, to determine how cognitive impairment might be affecting their lives.

Just five out of 435 Tsimane people and one of the 169 Moseten group had dementia.

This equated to a rate of around one per cent, the team wrote in Alzheimer’s & Dementia: The Journal of the Alzheimer’s Association.

For comparison, as many as 11 per cent of over-65s have the syndrome in the US. Rates are slightly lower in the UK at around seven per cent.

Lead author Professor Margaret Gatz, an ageing and preventative medicine expert at USC, said: ‘Something about the pre-industrial subsistence lifestyle appears to protect older Tsimane and Moseten from dementia.’

But the team also found up to 10 per cent of Tsimane and Moseten people had mild cognitive impairment — with some memory, language or spatial awareness loss.

These were similar rates to those found in the West, the authors said.

They could not explain why MCI rates were normal while dementia was so low, but found those who had either condition were more likely to have calcium deposits in the arteries supplying the front part of the brain.

Calcification can occur because of rare genetic disorders or inflammation and are different from plaque build-ups that are caused by high cholesterol diets common in the West.

While they were higher in those with MCI, calcification remained high across the whole Tsimane tribe, with the experts saying further research would be needed to investigate the levels.

More than 70 per cent of the Tsimane diet consists of high-fibre carbs including rice, plantain, yuca, corn, nuts and fruits.

The tribespeople eat an average of just 38g of fat a day, 11g of saturated fat and no trans fats.

Co-author Professor Hillard Kaplan, an anthropologist who has studied the Tsimane for 20 years, said the findings could help with strategies to deal with the growing problem of dementia.

Rates are expected to triple by 2050, with 150million predicted to be living with the condition by then.

Experts have blamed ageing populations, air pollution and sedentary lifetyles for the increase.

Professor Kaplan said: ‘We’re in a race for solutions to the growing prevalence of Alzheimer’s disease and related dementias.

‘Looking at these diverse populations augments and accelerates our understanding of these diseases and generate new insights.’

He said: ‘By working with populations like the Tsimane, we can get a better understanding of what human health was like in different environments before industrialisation.

‘What we do know is the sedentary, urban, industrial life is quite novel when compared with how our ancestors lived for more than 99 per cent of humanity’s existence.’

Dementia is one of the leading causes of death in the UK, contributing to 17 per cent of fatalities from 2011 to 2018, with the proportion expected to continue to rise in the coming years.

Exercising and eating a healthy diet can help prevent its onset by slowing shrinkage in the hippocampus — the part of the brain that deals with memory.

WHO ARE THE TSIMANE TRIBE?

The Tsimane is a tribe of around 16,000 people living along the banks of the Maniqui River in the Bolivian Amazon.

Unlike other Amazon tribes, the group has remained isolated from modern society since rejecting the advances of Jesuit missionaries in the late 17th century.

The tribe, comprised of 80 small villages, spread throughout the rainforest, is one of the last groups in the world which survives through foraging, fishing and hunting alone.

They fish using bow and arrow and poisonous vines, hunting with machetes and tracking dogs.

Despite their rugged lifestyle, Tsimane men have a third less testosterone than Western men, but the Bolivian forager-farmers’ testosterone level does not decline with age.

Their stable testosterone levels mean the tribesman rarely suffer from obesity, heart disease and other illnesses linked with older age.

More than 70 per cent of the Tsimane diet consists of high-fibre carbohydrate including rice, plantain, manioc, corn, nuts and fruits.

The tribespeople eat just 38g of fat a day, 11g of saturated fat and no trans fats.

The Tsiname are traditionally animists, and believe supernatural creatures who live in the forest control their fortunes.

They brew manioc beer in huge vats, a crucial part of social events which bring together families and villages.

They speak Tsimane as their primary language – a language completely distinct from other indigenous groups even a few miles away. But many speak Spanish as well due to recent bilingual education efforts.

The small number of Tsimane living around the town of San Borja own motorcycles and use mobile phones, but further up the Maniqui River the tribes people’s lives are far more traditional.