Drone delivery of coffees, medicine and food comes to a halt as aggressive RAVENS attack the sky-high tech over an Australian suburb

Aggressive ravens have forced a drone delivery service to pause flights altogether after bizarre footage emerged of the birds attacking them in the skies above Australia’s capital.

The service Wing, run in collaboration with Google, offers Canberra residents the option to buy essential items like coffee, food, medicine and hardware supplies through a drone which drops off each package to their homes.

But lately in the northern suburb of Harrison those eagerly awaiting their morning lattes have instead been greeted by vicious ravens swooping and pecking the aircraft.

Wing has now temporarily halted flights in parts of the suburb as local bird experts investigate the behaviour of the territorial animals. Ben Roberts was waiting for his daily coffee this week when he suddenly noticed that his drone was under attack.

He managed to film the raven hanging onto the back of the aircraft and furiously pecking it with its beak.

The drone struggled to fly under the weight of the large bird but fortunately for Mr Roberts was able to deliver his breakfast before flying back into the sky.

‘They are certainly very territorial at the moment,’ he told the ABC.

‘From their point of view, they’re very intelligent birds, what must a drone look like to them? It would be like a flying saucer landing in our front yard to us.’

Ornithologist Neil Hermes, who studies birds, advised Wing to pause the flights for the time being, adding the fact it was nesting season is likely playing a part in their aggression. 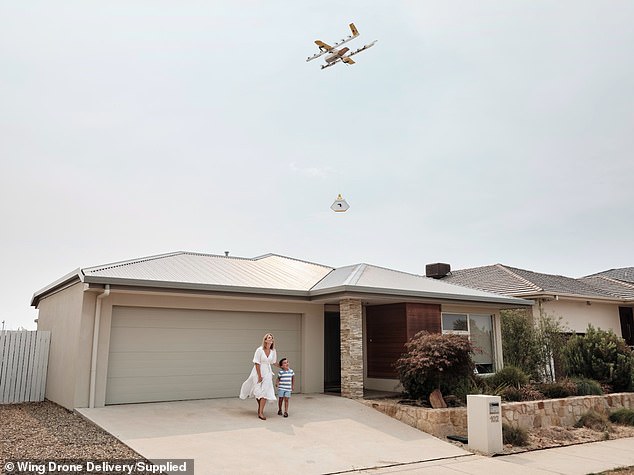 Wing, which operates the drones, has been forced to temporarily pause flights in parts of the Canberra suburb of Harrison due to vicious ravens attacking the aircraft (pictured is one Wing drone delivering a package to a family)

‘The bird appears to be perfectly unharmed by the fact it’s attacked this drone, and given that Wing are not currently flying in the area, the bird probably feels it has been successful in driving it away,’ he said.

A spokesperson for Wing told Daily Mail Australia the drones are operating as normal in other suburbs and they were yet to learn of any birds being injured from the aircraft.

‘As is common during nesting season, certain bird species demonstrate territorial behaviour and swoop at moving objects,’ the spokesperson said.

‘In the unlikely event that a bird makes direct contact with our drone, we have multiple levels of redundancy built into our operations to ensure we can continue to fly safely.

‘Consistent with those procedures, the drone completes its delivery safely, including delivery of food and drink that remains untouched in our delivery package, and then returns to our facility.’

The spokesperson added that there’d also been recent reports of ravens attacking garbage trucks, cars and even pedestrians. 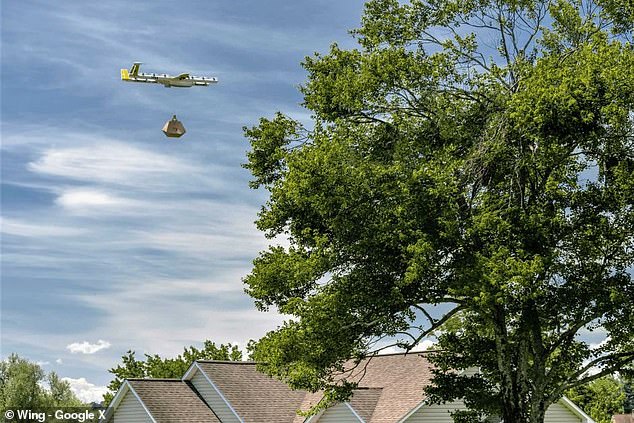 Wing was first launched in the ACT in 2019 and has become widely popular during the recent Covid-19 lockdown with 10,000 deliveries carried out

‘We have identified some birds demonstrating territorial behaviour in a small part of our delivery area in the suburb of Harrison, and we’ve asked local ornithological experts to investigate this further to ensure we continue to have minimal impact on birdlife in our service locations,’ they said.

Wing was first launched in the ACT in 2019 and has become widely popular during the recent Covid-19 lockdown with 10,000 deliveries carried out.

The service is available for those in Canberra suburbs Crace, Palmerston, Franklin, Harrison and Mitchell with food, medicine, office supplies and hardware tools all on offer.