A young student who helped his doting parents recreate the same picture they captured 28 years ago has melted hearts around the world.

Raymon ‘Ray’ Michael Puzon, 21, shared two photographs on Twitter, which were taken nearly three decades apart of his parents standing at a memorial at Lingayen Beach in the Philippines.

The old picture, taken in 1992, shows his mother wearing a red shirt with white pants, while his father opted for a brown top with a white neckline and beige trousers.

The other snap, taken on January 11, 2020 shows the married couple reenacting their old pose by standing in the same spot wearing nearly identical clothes.

‘So my parents asked me to take their picture so that they could recreate their picture in the same spot from the year 1992,’ Ray said in his tweet, which has since been ‘liked’ more than 100,000 times.

Speaking to Daily Mail Australia, the family shared their heartwarming story behind their pictures – and it all started after his parents met at college in 1992. 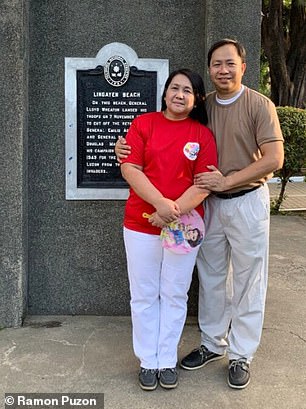 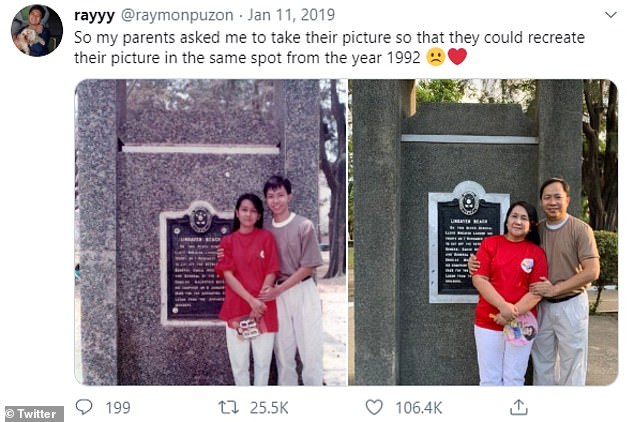 Raymon ‘Ray’ Michael Puzon, 21, shared two photographs on Twitter taken nearly three decades apart of his parents standing at a memorial at Lingayen Beach in the Philippines. His post quickly went viral, with more than 100,000 people ‘liking’ his tweet

Ramon Puzon met his then-girlfriend Nela, both aged 20 at the time, when they were studying computer engineering in college nearly three decades ago.

During their break in December 1991, Nela returned home to Lingayen, Pangasinan, about 200km north of Manila, to spend time with her family over Christmas.

But she never returned to college to start her semester in early January 1992.

‘She didn’t show up during enrollment day. Then I found out from her cousin that she got very sick and needed to stop for a semester to get better,’ Mr Puzon said.

‘I didn’t know what to do back then. They had no phone (landline) in their house in Lingayen and I needed to know what was happening to her or how sick she was.’

Concerned about her condition, Mr Puzon said he decided to travel to her hometown to check whether she was okay.

‘My dad accompanied me to the bus station and gave me instructions. It was a five-hour bus ride,’ he said.

‘I was on my own going somewhere I’ve never been to before and determined to find Nela’s house using the address that I got from her cousin.

‘Eventually, I found her house and had an idea of her health status. She just needed to rest and be on medication for at least three months. So taking a break from college was mandatory. That visit gave me the peace of mind that I needed.’ 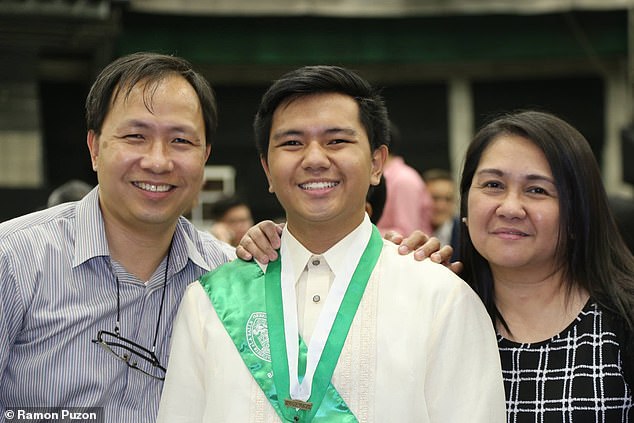 Happy family! Mr Puzon with his loving wife Nela and their 21-year-old son Ray, who set the internet alight after sharing side-by-side pictures of his parents recreating their memories 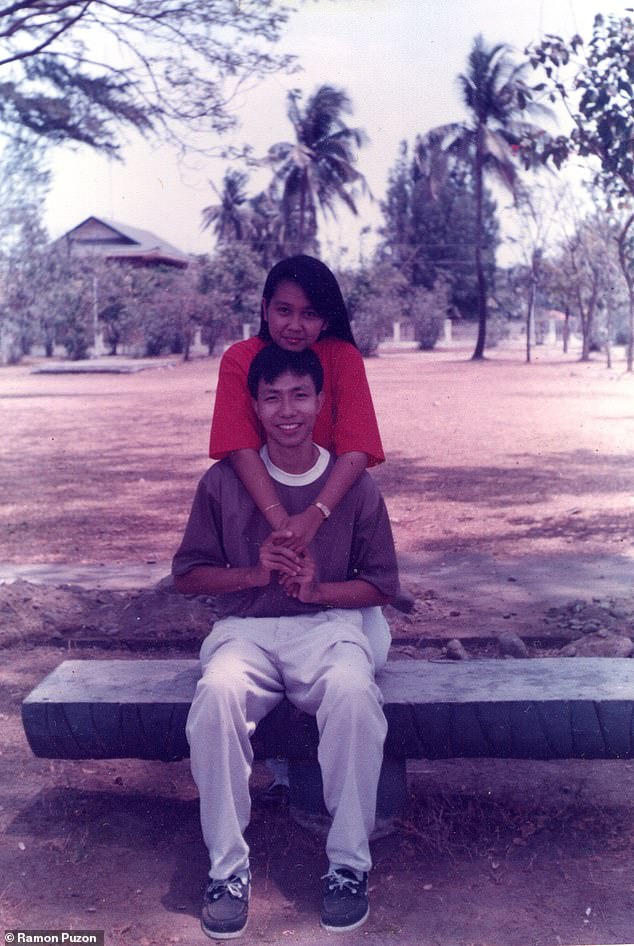 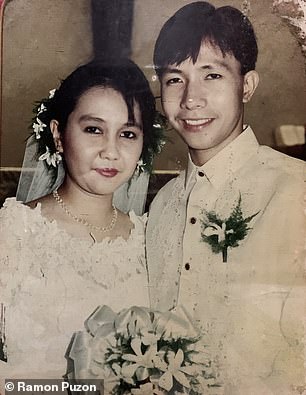 The couple got married in June 1995

During his visit, the couple decided to go for a stroll along Lingayen Beach that afternoon.

‘It was the first time I saw Lingayen Beach and it was beautiful. The sand and ocean facing the South China Sea was so serene and majestic,’ he recalled.

The next morning, Mr Puzon travelled back to Manila where he started to ‘imagine how lonely college life would be without her’.

‘I thought “I’m going to miss her so much”. So I wrote her a letter every day and sent them to her,’ he said.

Just weeks later on Valentine’s Day, he returned to Lingayen with a camera.

‘I made sure I had a camera with me so I could take pictures of her and us. It was my way of having something to keep when I was not with her,’ he said.

‘During that visit, I asked her to go on a stroll with me again at Lingayen Beach. We were with her younger sister Belle who took the pictures. Those set of photos were our very first picture together.’ 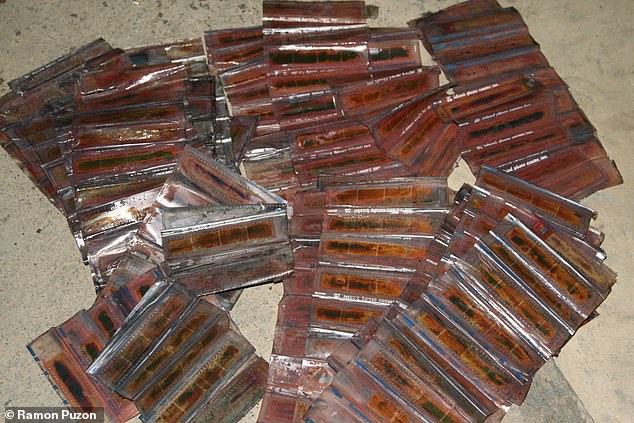 After their city was hit by a powerful typhoon in 2009, most of their films were destroyed

The pair both graduated from college in 1993 before they got married in June, 1995.

‘Fast forward to 2009, our city was hit very badly by typhoon “Ondoy” which destroyed 99 per cent of all our developed photographs and photo albums,’ he said.

The couple lost most of their memorable photographs, including their wedding and honeymoon albums – except the very first pictures they took together in 1992.

‘Every year, we try to visit Lingayen as often as we can. We’ve witnessed the developmental progress of the buildings and Lingayen Beach as years passed by,’ he said.

‘All the landmarks where we took our photos back in 1992 were all gone after the typhoon except for the Lingayen Beach Memorial.’

And so Mr Puzon decided to surprise his wife by organising another picture to be taken at the same spot without her knowledge. 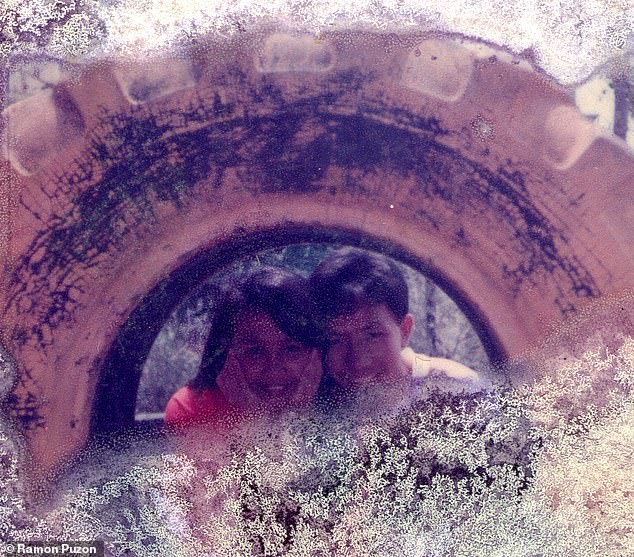 Mr Puzon said he found the ‘dried up’ films after the typhoon, and he managed to save some of the pictures from 1992, including this one

He went to extreme lengths to track down the same clothes they wore 28 years earlier so he could pack for their trip to Lingayen.

‘My plan was to wear the same shade of clothes from the old picture,’ he said.

‘My wife already owns a similar red t-shirt so that helped. My first challenge was to look for my wife’s white pants. I texted her saying that my mum wanted to borrow her white pants so I asked her where it was – problem solved.

‘The second challenge was finding the same colour shirt that I was wearing. I went to a department store but I couldn’t find the same brown top with a white neckline.

‘So I just bought a brown coloured shirt and then I just wore a white t-shirt inside it. My last challenge was to look for a plastic Betty Boop fan but I didn’t find any, so Snow White will have to do.

‘I packed all the clothes, pants and shoes myself so she had no clue about my plans.’ 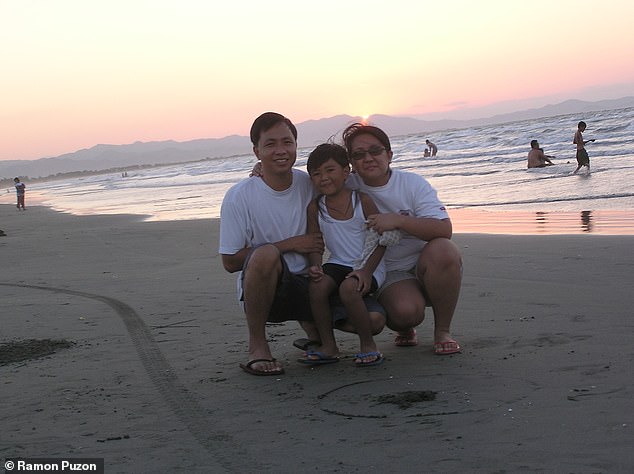 When the family visited the area on January 11 this year, Mr Puzon said he reminded his wife about the first picture they ever took together.

‘And then I gave her the clothes to wear so we could recreate the picture,’ he said.

‘She was giggling in laughter as she was looking at them. She was amazed that I really prepared for that photoshoot. We wore those clothes and I got our son to take the picture.’

Mr Puzon, a senior telecom engineer, and his wife Nela, a payroll manager for a bank, have been married for more than 24 years.

But what’s the secret to their long-lasting love?

‘It just came naturally. It will be our Silver Anniversary [25 years] this year. I guess the two contributing factors for me are – one, my wife who I love very much is my also my best friend and two, we are a strong tight-knit family.’