It’s the most tantalising of questions: is there life after death?

After we featured a thought-provoking piece by a Cambridge academic who is convinced there is, many of you wrote in to agree.

Here, we share some of your most compelling experiences…

After we featured a thought-provoking piece by a Cambridge academic who is convinced there is, many of you wrote in to agree

Dad’s energy was there as my son was born

I had a very profound other-worldly experience during the traumatic birth of my youngest son that completely changed the course of my life.

My father, Jim, who’d died of lung cancer three months before at 69, ‘showed up’ during the final moments of labour. It was all the more powerful for the fact that the last time I saw him, two hours before he passed away, I told him I was having a boy and said: ‘Please always look after my son.’

The labour had been dragging on for hours and I was reaching what they call ‘transition’, just before the pushing stage of childbirth. All of a sudden my dad’s energy filled the room. It’s hard to explain but I recognised his spirit, if you like, his essence; I just knew he was there with me. I gasped: ‘Oh my God, my dad’s here!’ The midwives looked around as if I meant he’d walked into the room. 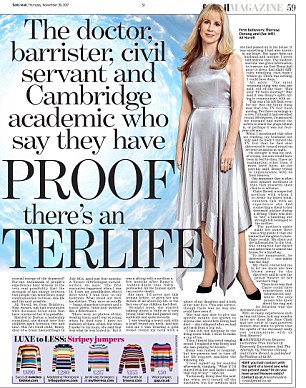 Moments later, my son was born. It made me think that my dad must have ‘heard’ my deathbed request to him on some level, despite having been unconscious. He had chosen to respond by supporting us through my baby’s most difficult journey — that of entering the world.

Back home, a medium told me my dad was still there with us. I noticed signs that he was there: coins kept appearing in my shoes. On one occasion I was alone in the house with my baby when I put him in his car seat on the table, went into the kitchen to get something and came back to see the seat had been turned round, as if someone had wanted to take a look. I knew straight away it was Dad.

These experiences totally changed my belief system. I went from never having thought about it to suddenly believing some form of existence continues after you die.

Messages from my mother-in-law

My mother-in-law, Edith, always used to say that if there was anything ‘on the other side’ she’d tell us when she got there. She was a very straight, no-nonsense type of person so it was entirely in character, though my husband and I didn’t take much notice at the time.

She died of a heart attack at 68. After the funeral in August 1964, friends and family returned to Edith’s home. Everyone was chatting away and I was handing out sandwiches.

At one point I was walking towards my husband when I felt an ice-cold draught. Suddenly the small picture on the wall opposite me ‘leapt’ a metre or so and fell at my feet.

The look on my sceptical husband’s face said it all: ‘My mother!’ he gasped. The three-inch nail used to hold the picture on the wall was still very much in place and had been put in at an upward angle to prevent a picture slipping — let alone jumping — off the wall. Coincidence? We think not.

The lamp that switched on by itself

Sonia Mackett, 64, from Gorleston, Norfolk, has a 30-year-old daughter and 29-year-old son. She is a part-time adult education tutor. She says:

My late husband, Tony, didn’t believe in life after death, but he always jokingly said if he died before me he would let me know whether there was.

We’d been married for 37 years when he was diagnosed with a terminal brain tumour. It was very difficult for both of us. He became afraid of the shadows in our bedroom and I bought him a touch control bedside light, which he was absurdly pleased with — it was his safety lamp. 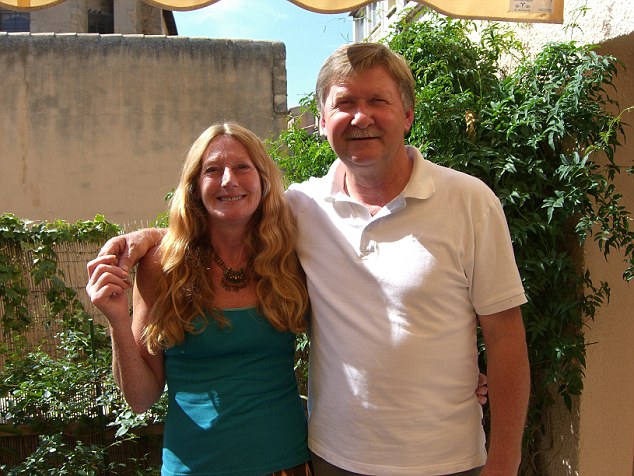 Sonia Mackett’s husband, Tony, (pictured together) died in December 2010 and some months later when she was lying in bed, his lamp flicked on

He died in December 2010 and some months later, I was lying in bed and his lamp flicked on. You had to touch it three times to achieve full illumination but it had come on full without anyone touching it at all.

I said aloud: ‘OK, I know what you are trying to tell me but I’m a bit frightened now.’ It never malfunctioned again.

If I’d been asked to name one way that he would contact me, it would’ve been through this light that made him so secure. He wanted me to know he was still here and to feel safe too.

A ticking off — from beyond the grave

I have believed there’s life after death since I was a child. My mum often spoke of spirits and when I was eight, feeling cocky, I said to ‘them upstairs’: ‘OK, if you’re real, show yourselves.’ All of a sudden, a hazy mist appeared and from it the image of a young man. I pulled the covers over my head and shouted: ‘Go away, go away!’

Afterwards, I realised the mysterious face looked similar to my older brother. I was aware my mother had given birth to a stillborn son before we’d been born — was this his spirit I’d seen?

Perhaps a more persuasive example was when I was in hospital, having given birth to my youngest daughter. My blood pressure was sky-high and I’d haemorrhaged badly. I asked the nurse whether I was going to die and she ran out of the room (very reassuring!). All hell broke loose with emergency bells going off, but just before I fell unconscious I saw an orb in the top left hand corner of the room and my dead mum’s voice said: ‘It’s not your time.’

My mum appeared again after my marriage broke down. I had sunk into a deep depression and was barely eating or sleeping. At my lowest ebb, I felt a breeze at my left ear and my late mother’s voice screamed at me in the exact tone she’d reserve for telling me off as a child. She said: ‘Come on now, you’ve had long enough to weep: get out of bed and be a mother!’ It was enough to turn me around, to get help, and get my life back on track.

Beam of sunlight from my son

Patricia Copsey, 74, a retired personal secretary from Cambridgeshire, is married to retired engineer Terry, 73. They’ve had four sons. She says:

Seventeen years ago my third son took his own life aged 25. He’d made numerous attempts beforehand, having battled depression on and off since being bullied at school. When an industrial accident stopped him from doing the forestry job he loved, he sank down into the darkness again.

We were very close and I’d done everything I could to stop him committing suicide. I pleaded with him and eventually he told me that one day I would regain my happiness and that if there was any way he could get in touch with me after his death he would.

Words cannot express my devastation at his loss. He left me with instructions to place his ashes on Table Mountain in South Africa, where he had been born. We had lived there until he was 13 before moving back to the UK.

My husband and I respected his wishes and eventually took him back two years later. After three years we returned along with his younger brother.

That particular day the mountain was shrouded in thick mist and we were advised not to go up in the cable car as there was no view. We had not travelled 7,000 miles for the view, so went up anyway. The three of us wandered around the pathways until we thought we were close to the place where we’d scattered his ashes. We just stood looking in silence.

Suddenly the mist cleared and a shaft of brilliant sunshine beamed down on to the exact spot.

The three of us just looked at each other open-mouthed, and my son remarked that if you didn’t believe, you had to believe now. The sun remained for a couple of minutes before the clouds closed over once more. From that moment we were at peace.

My husband saw his own funeral

I felt very alone when my husband died last September. We’d been happily married for 40 years, a second marriage for us both so we didn’t have any children together. Everyone rallied around but one lady in particular took me under her wing and persuaded me to go to the Spiritualist Church in Bath with a view to making contact with my husband.

I must admit I went along thinking it was all a con. But the medium gave me a shock when he pointed to me and said: ‘Now we must come to Mary.’

I’d never told anyone I’d been christened Mary — I always used my middle name, Elizabeth. On that particular occasion he only told me general things but, intrigued, I returned the following month.

This time a medium said she had my husband with her. She described him accurately and told me he’d attended his own funeral.

She then proceeded to describe the music (the fact his grandson Edward had played the violin so well they’d forgotten to play the naval march when we processed out), the flowers (a white cross with a single red rose from me) and the fact it had been held in Bath Abbey.

She told me my husband wanted to apologise for passing so quickly, saying one minute he was with me and the next he was there watching me calling for help. He was sorry that I’d been in a state of shock and had to deal with everything.

He said I must be careful going up the stairs — very specifically up not down. At the time I’d been having to carry sacks of linen from my rental properties up to the attic for storage and twice I’d lost my balance going up, nearly falling down the stairs.

He then told me, via the medium, I had something wrong with my right ear. I had being having earache for almost two weeks but hadn’t told anyone. He thought I might go deaf so insisted I went to sort it.

The next day I went to Boots for an examination and yes, I did have a problem and they gave me a letter for my doctor. I was given drops and had to return for treatment.

Perhaps some will dismiss these as mere coincidence but it was enough for me to believe. Now I attend the church weekly and take great comfort from the thought my husband is looking out for me.