Reading festival begins as thousands of people set up their tents

Thousands of people have pitched their tents up in fields for the Reading and Leeds Festival.

Incredible aerial photos provide a bird’s eye view of colourful tents set up in fields and along the river in Reading for the four-day music event this weekend.

Among the many attendees are excited teenagers who received their GCSE results earlier in the day.

Many took to Twitter to share their excitement for the event, including one who tweeted: ‘GCSE results done, Reading festival here we come’.

Parents also took to Twitter proudly speaking of their child’s achievement – and their trepidation as they set off for their weekend at the festival.

One tweeted: ‘And they are off – post-GCSE results Reading Festival xx’.

This year’s line-up on the two sites – on Richfield Avenue in Reading and in Bramham Park, near Leeds – includes Foo Fighters, Billie Eilish, The 1975, Charli XCX and Chvrches.

Incredible aerial photos show thousands of people who pitched their tents up in fields for the Reading and Leeds Festival, which will take place over four days this weekend. (Pictured: Thousands of tents at the Reading Festival site today) 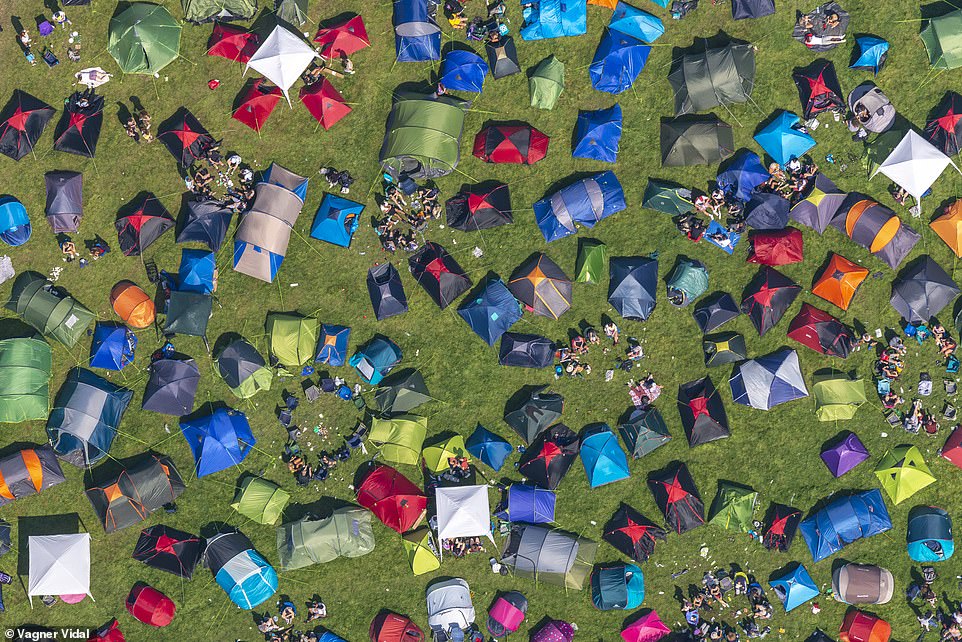 Reading festival goers pitched their colourful tents in the field. Groups of friends sat around in circles outside their tents. Some are celebrating the GCSE results that they received earlier today 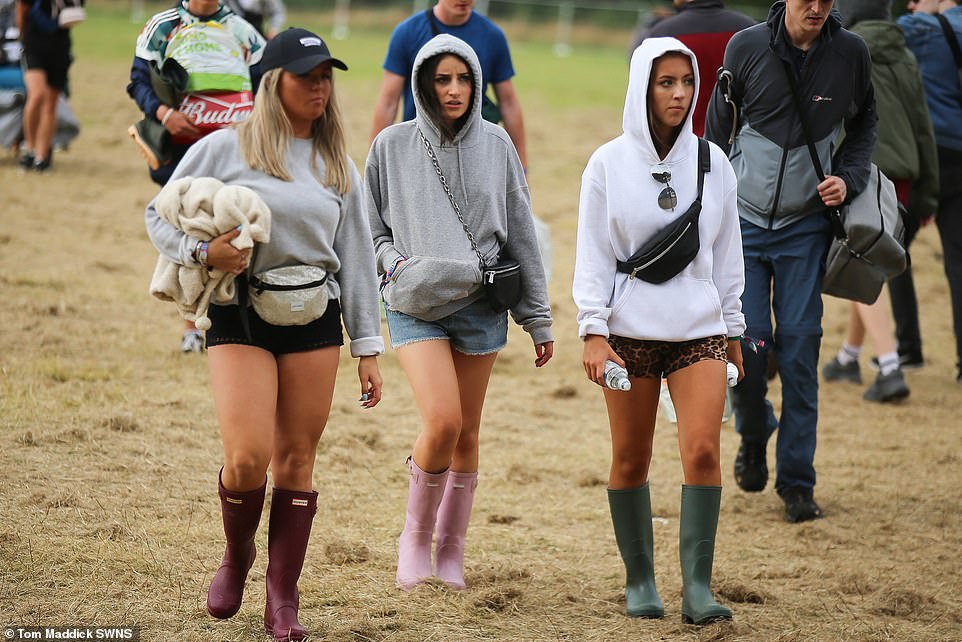 After rain dampened the Leeds Festival in Bramham Park today, revellers were forced to don jumpers, coats and wellies

Festival goers were also seen carrying packages containing drinks, as well as sleeping bags and a change of clothes, as they made their way onto the Leeds festival site ahead of the launch tomorrow 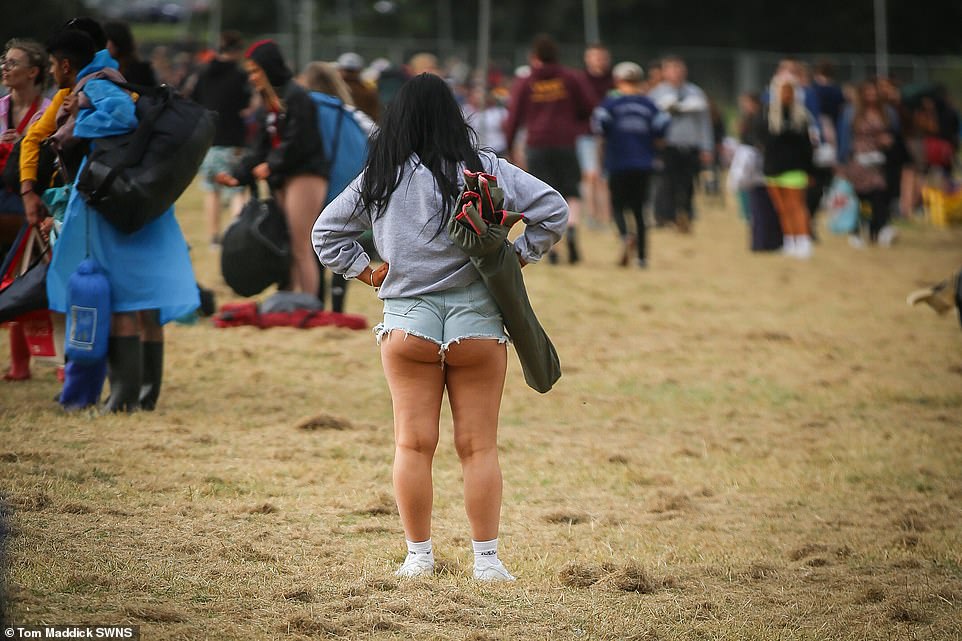 One young woman did not seem to fear the cold, dressed in hotpants as she waited for her pals to catch up with her at Leeds Festival 2019, in Bramham Park today 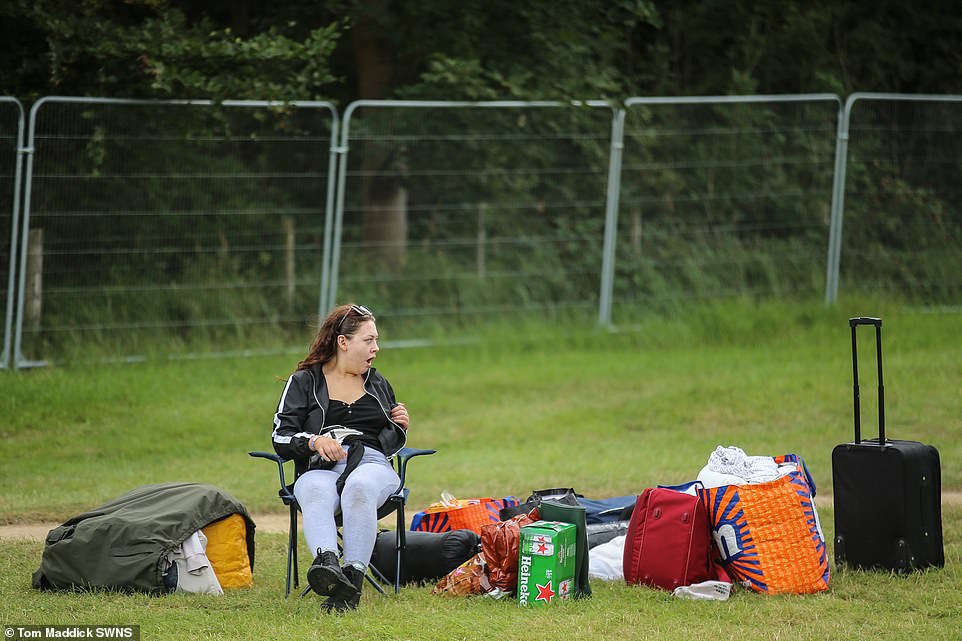 A tired reveller yawns as she sits among suitcases and sleeping bags at Bramham Park, Leeds, today. She may have been exhausted after staying up all night waiting for her GCSE results 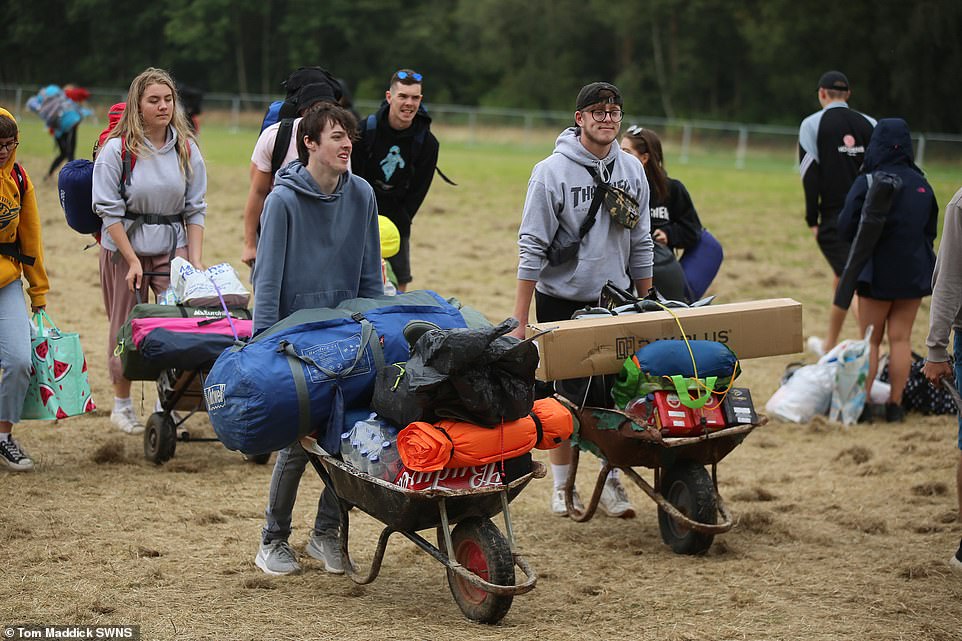 Festival goers used ingenious methods to get all their cans, tents and clothes into the site at Leeds today. This group of excited party animals brought them in using wheelbarrows 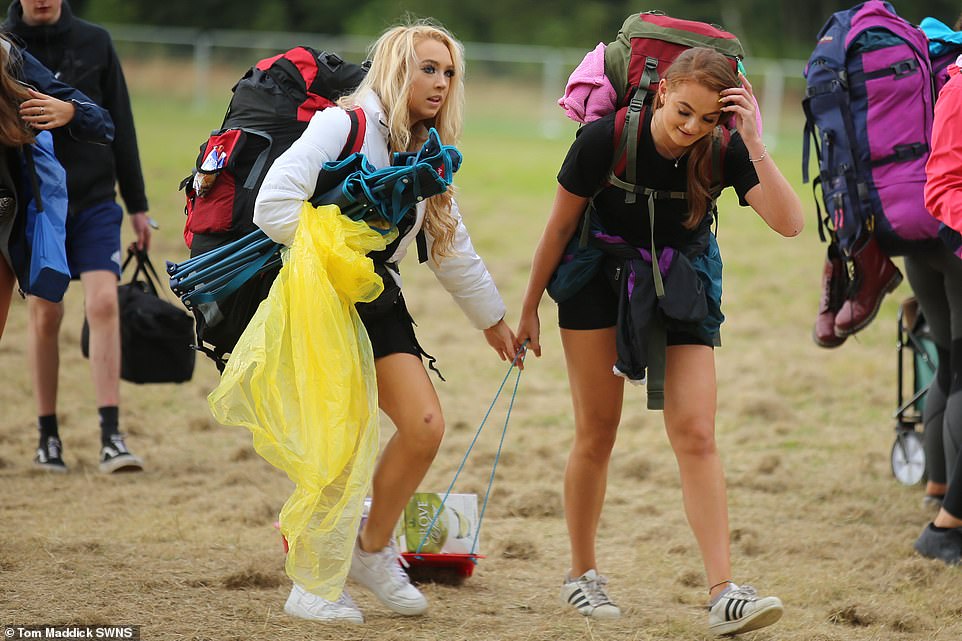 These two girls found an alternative use for a sledge today at Leeds festival, which they used to bring in some drinks 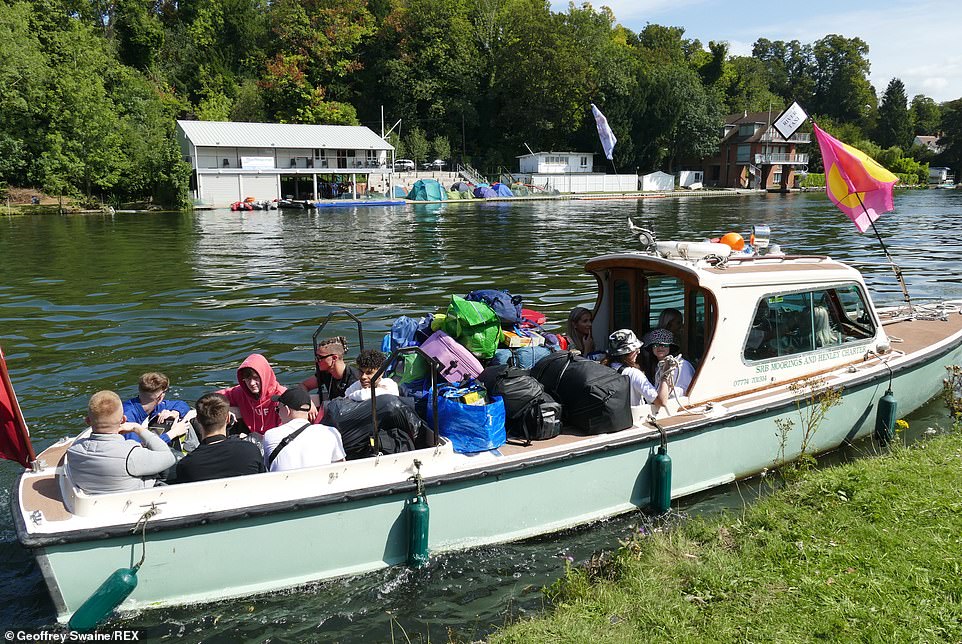 One group decided it would be best to arrive at the Reading festival in style yesterday, so they pulled up in a boat that was heavily laden with their suitcases 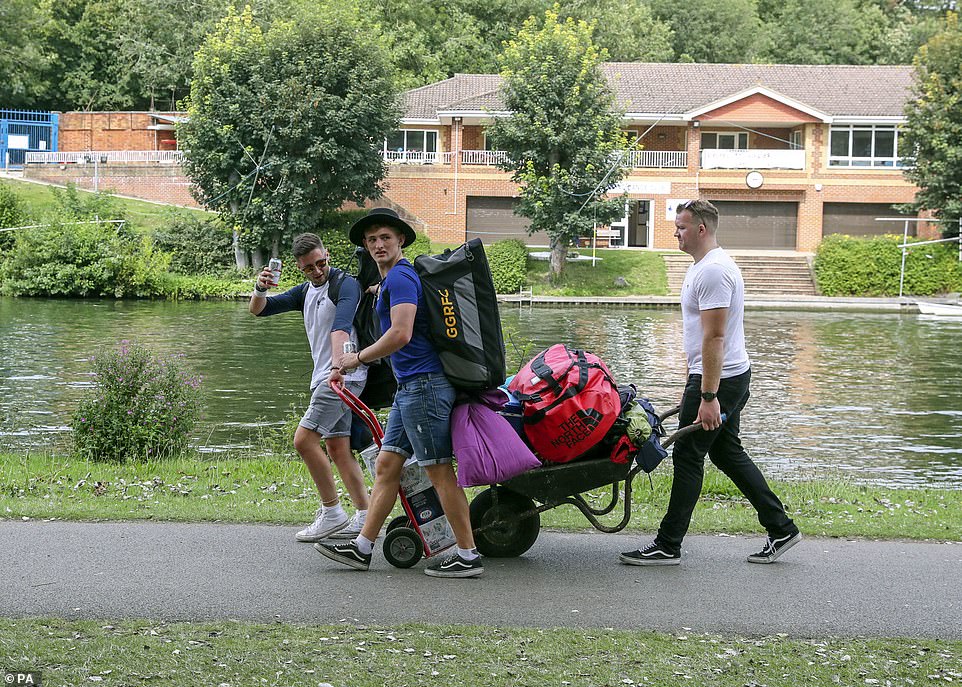 This group also thought it would be best to use a wheelbarrow to get all their bags into Reading Festival. They are pictured walking along the side of the River Thames on Richfield Avenue 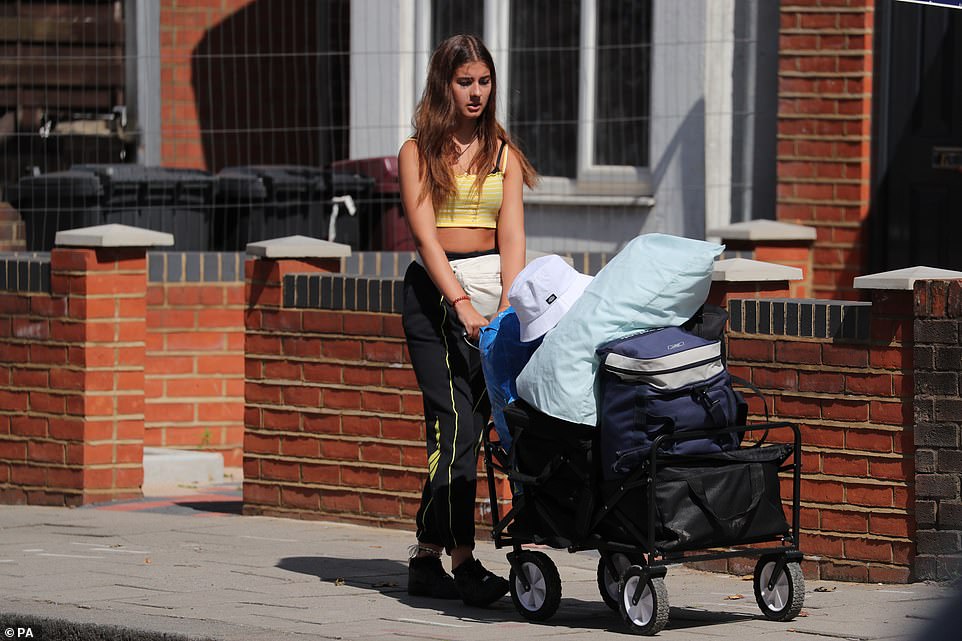 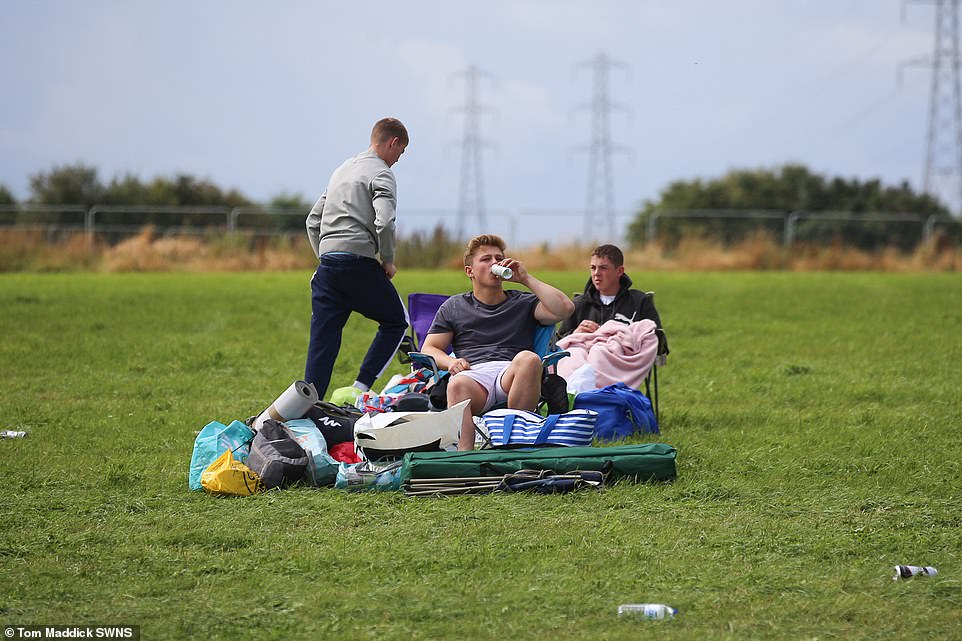 After arriving, these boys put up deckchairs and sat down for a drink. It appeared their tent was still in its bag in front of them 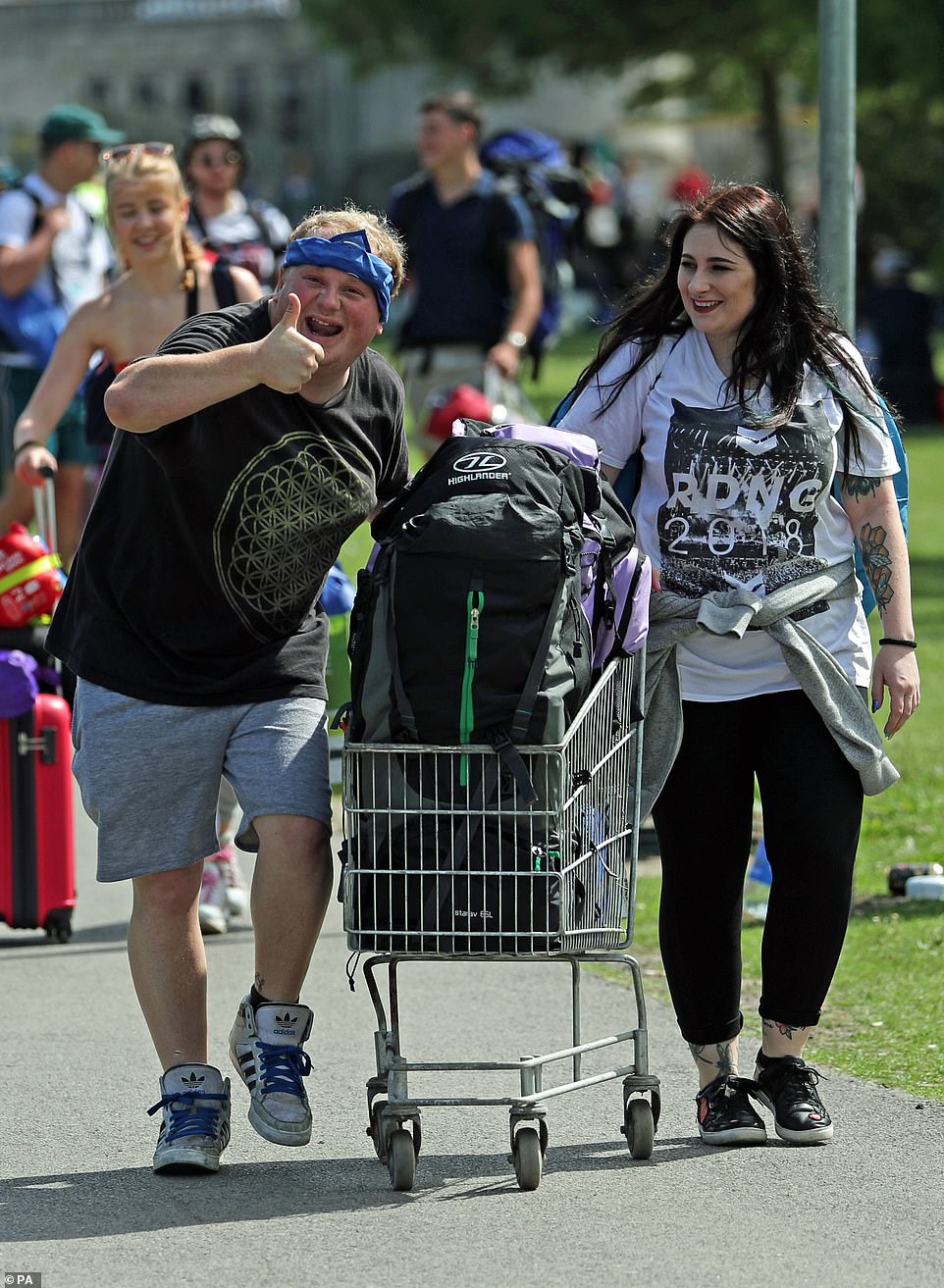 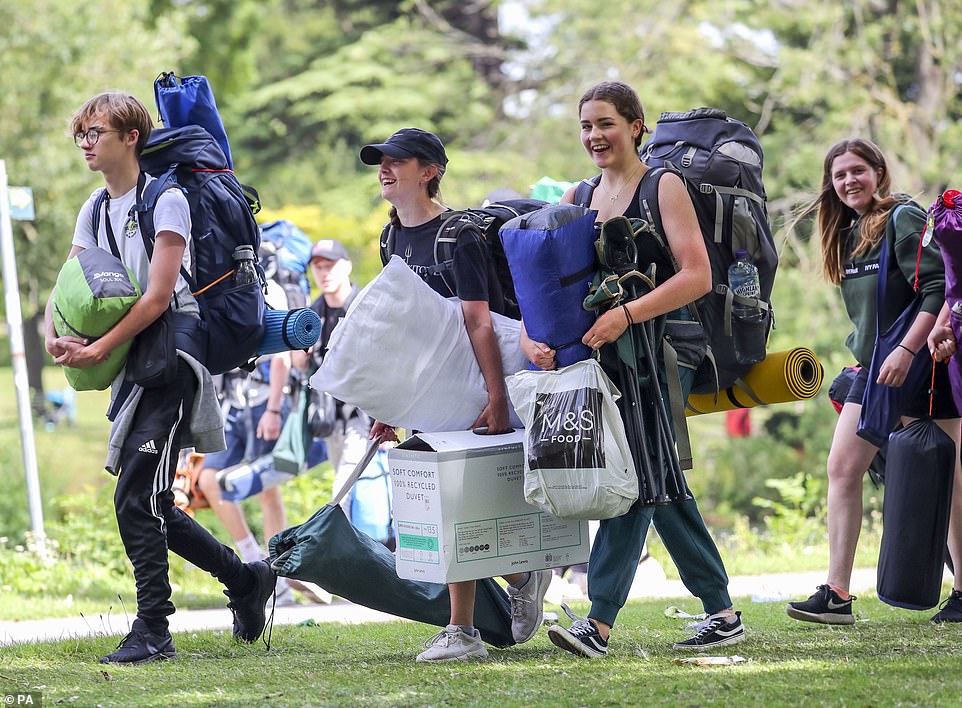 This group of four opted for comfort, bringing in a duvet and pillow along with sleeping bags and tents at Reading Festival 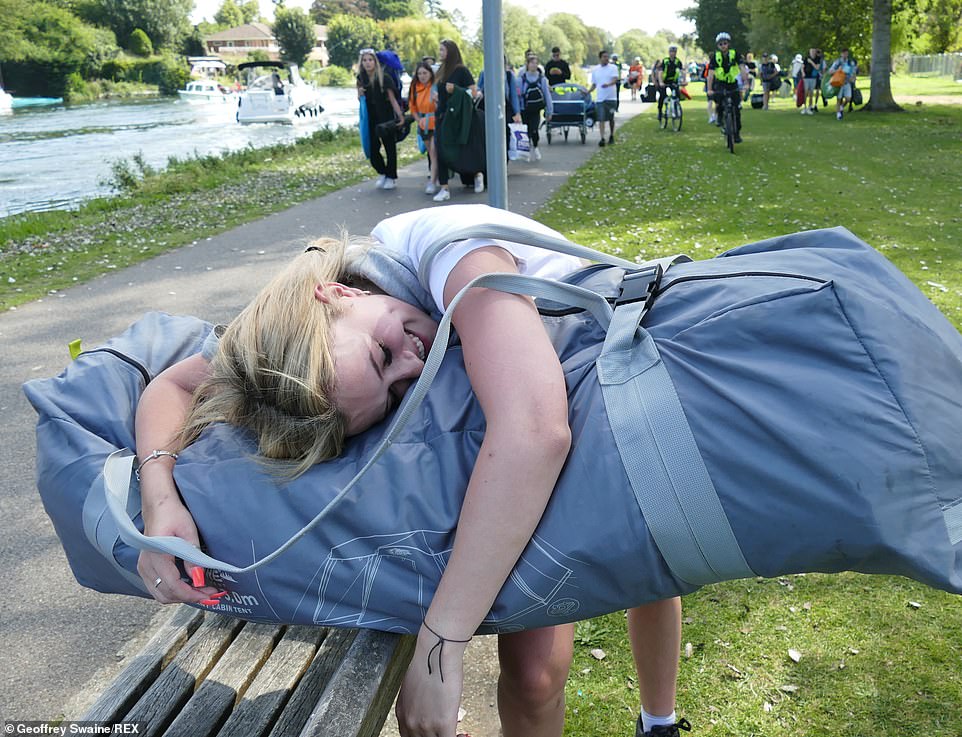 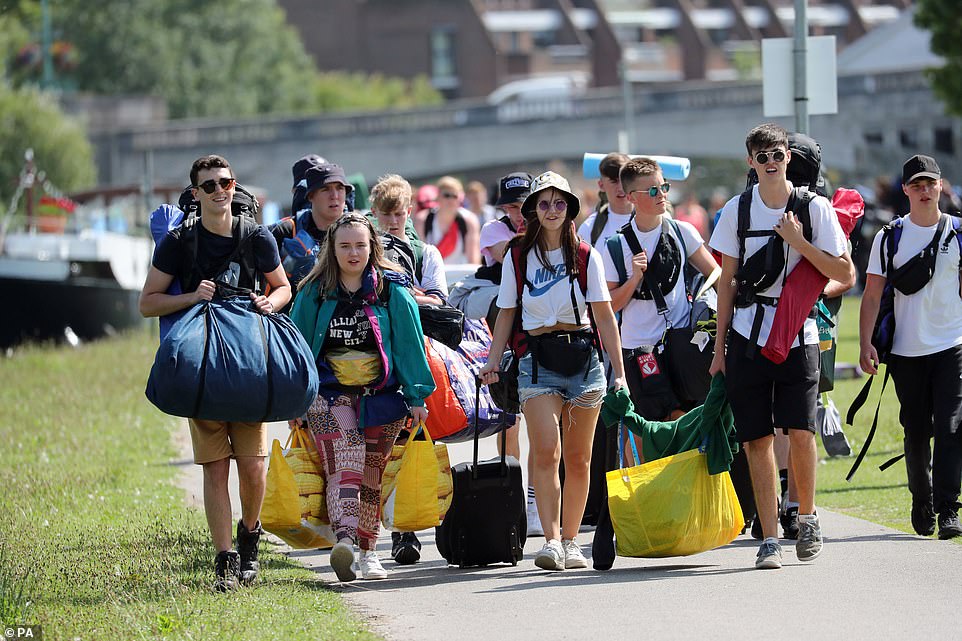 This team arrived laden with heavy bags, suitcases on wheels, tents, and sleeping bags ahead of Reading Festival 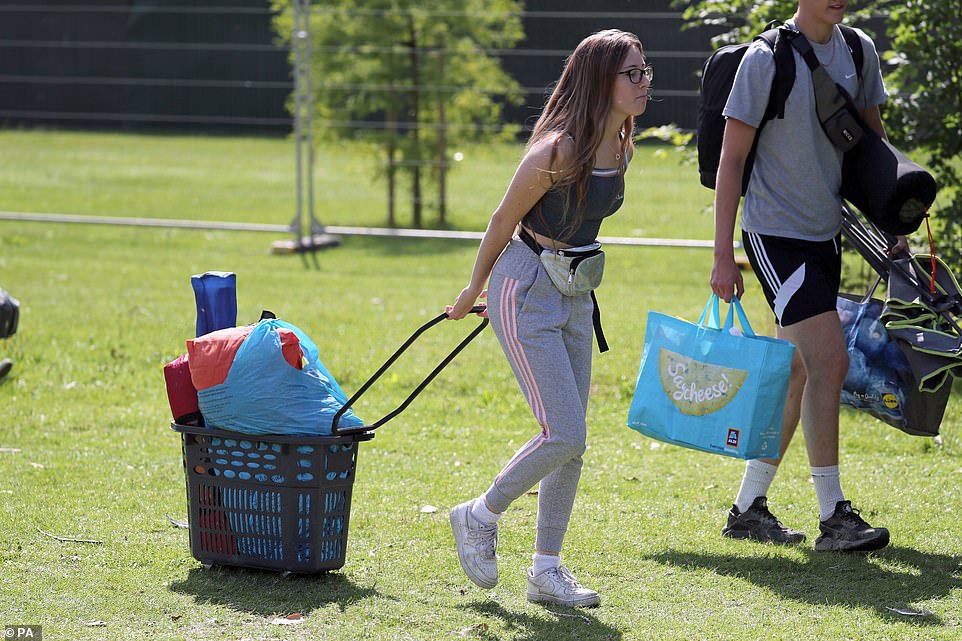 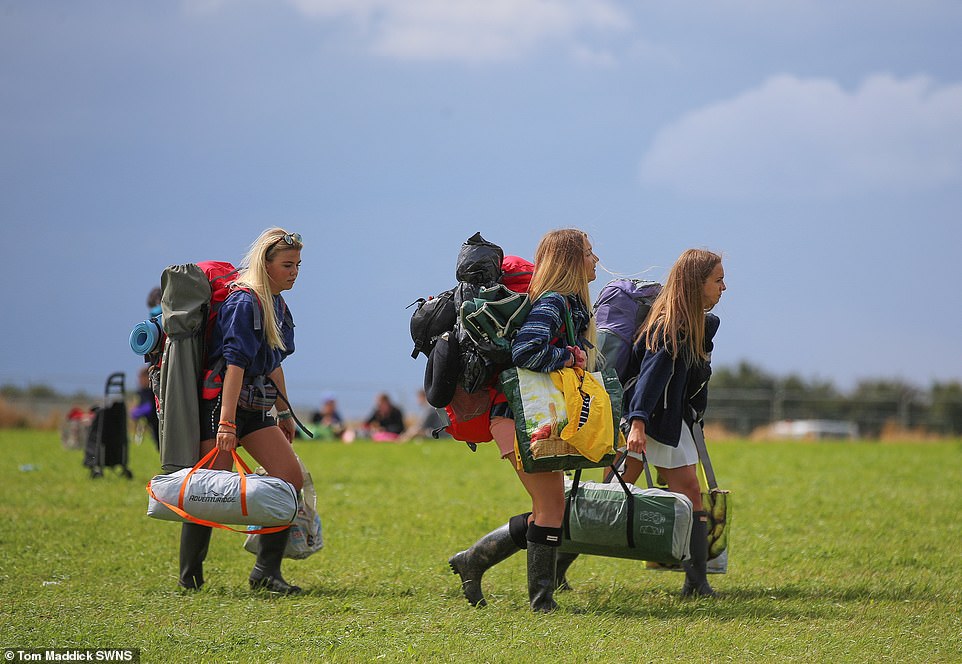 These three girls were seen carrying in all their gear as well as tents for the Leeds Festival. It officially kicks off on Friday, at the same time as the Reading Festival 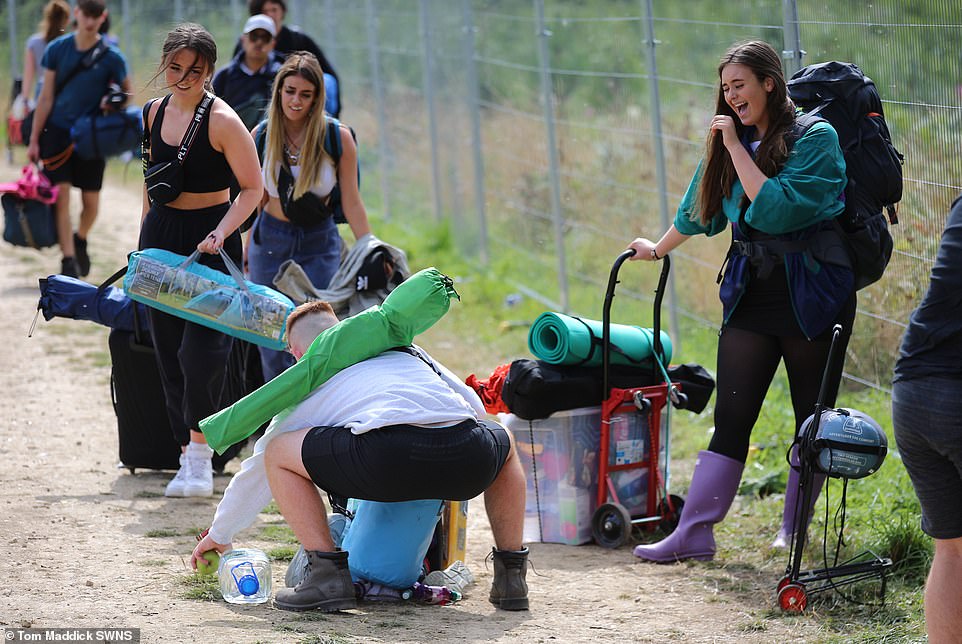 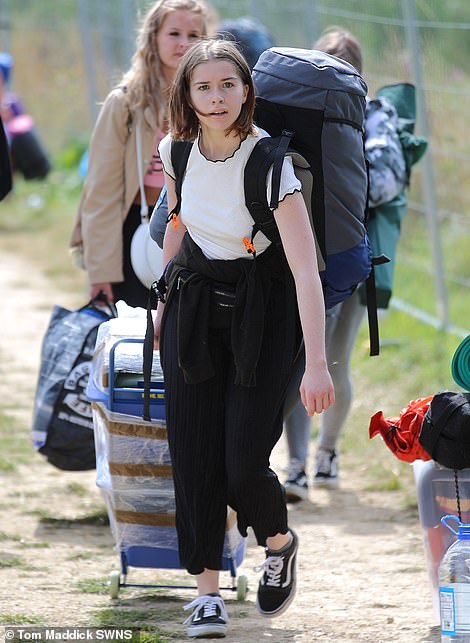 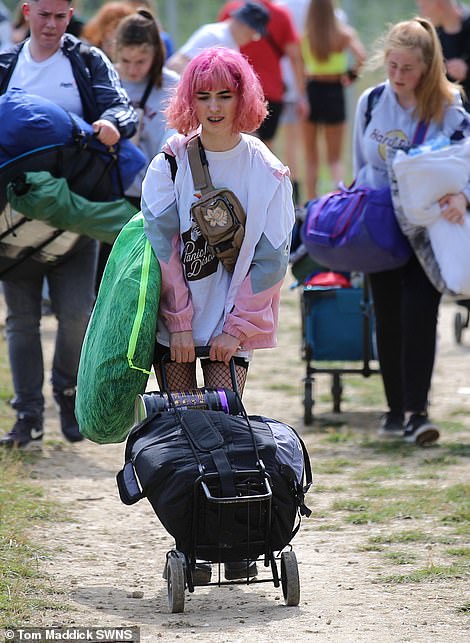 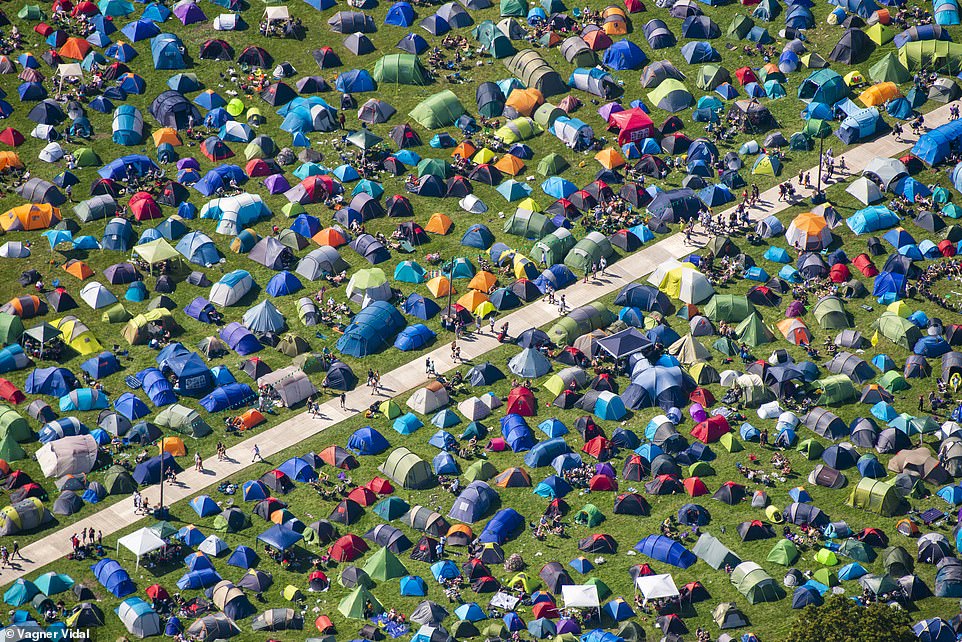 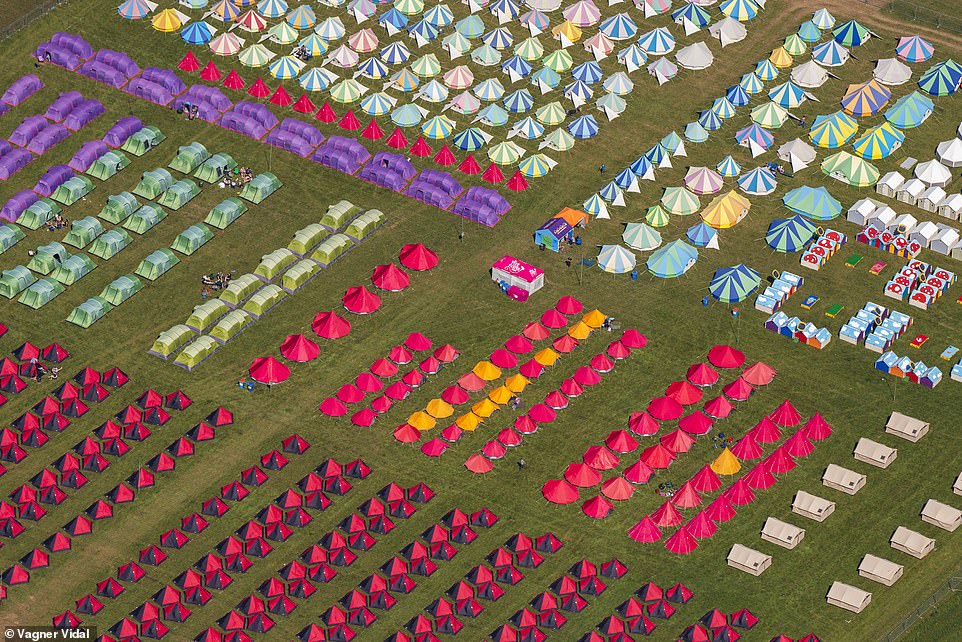 In more controlled areas of the Reading Festival, the tent city took on a more organised appearance. Tens of thousands are expected to descend on the Thames Valley town 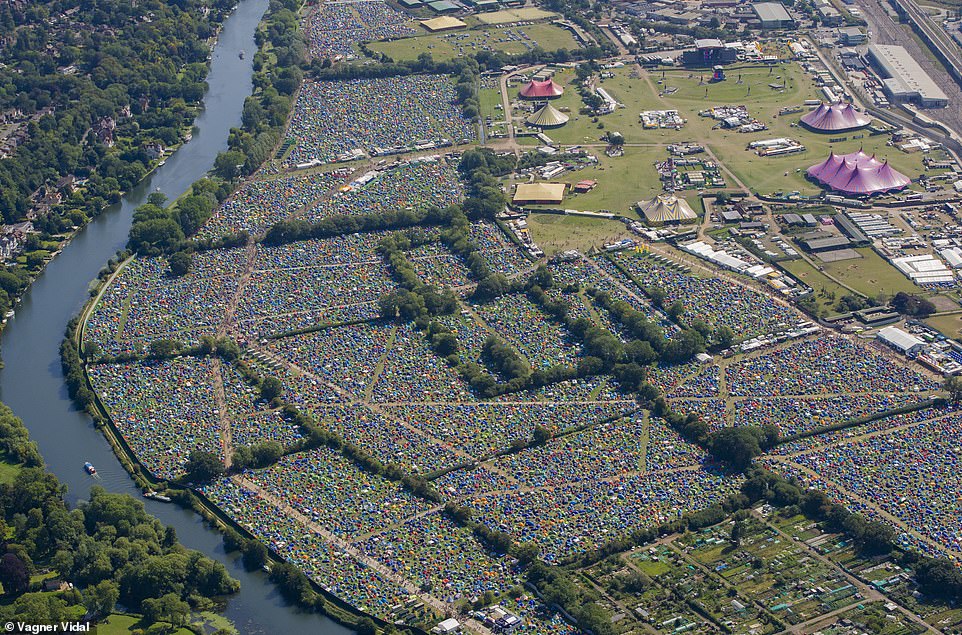 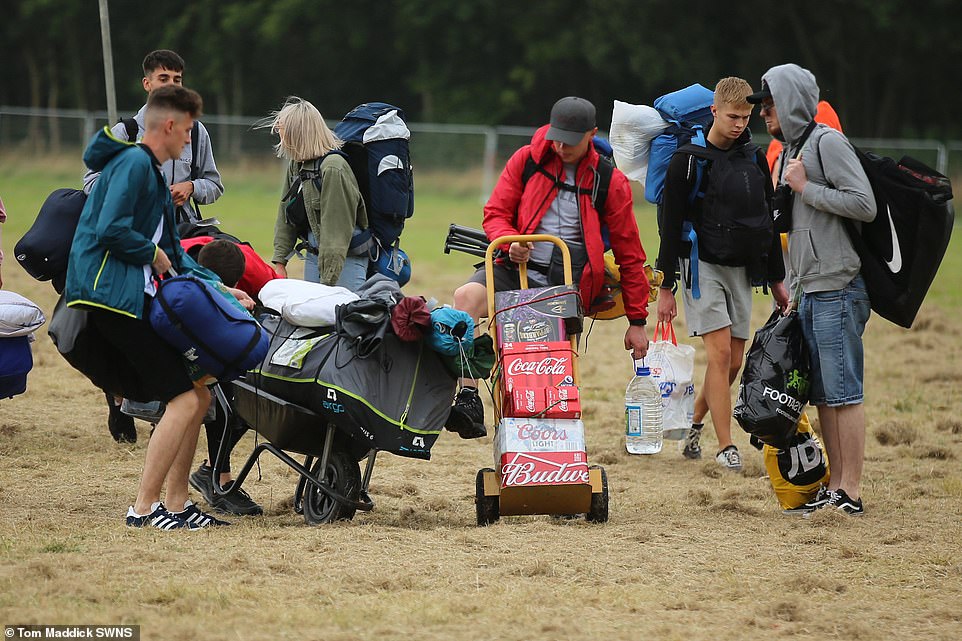 A group of thrill seekers were pictured dragging a large number of cans onto the festival ground before pitching their tent in Bramham Park, Leeds today 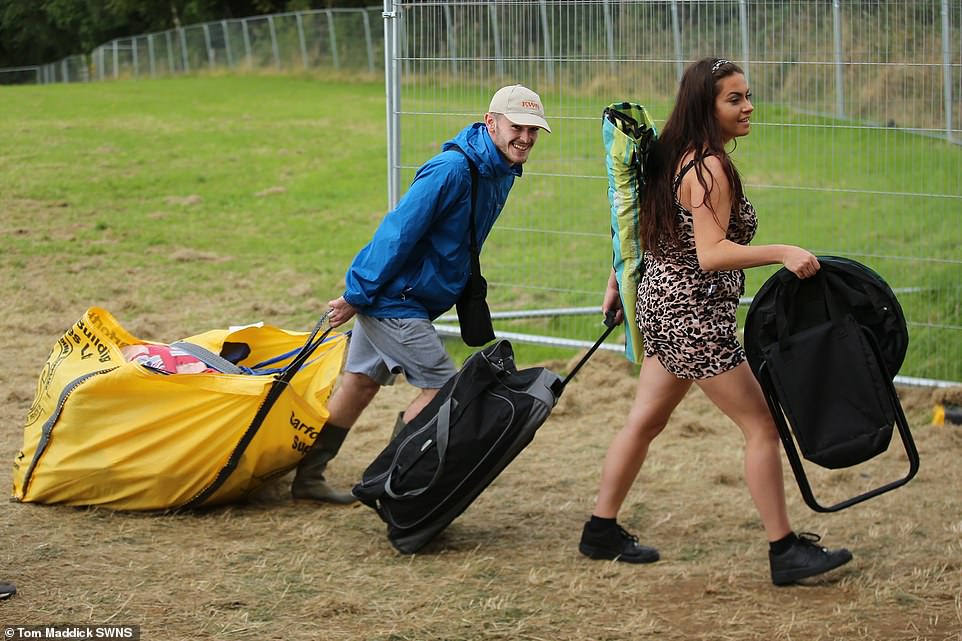 A young lady wearing an animal print item of clothing was seen dragging her suitcase into the festival in Leeds today, followed by a man dragging a huge yellow sack 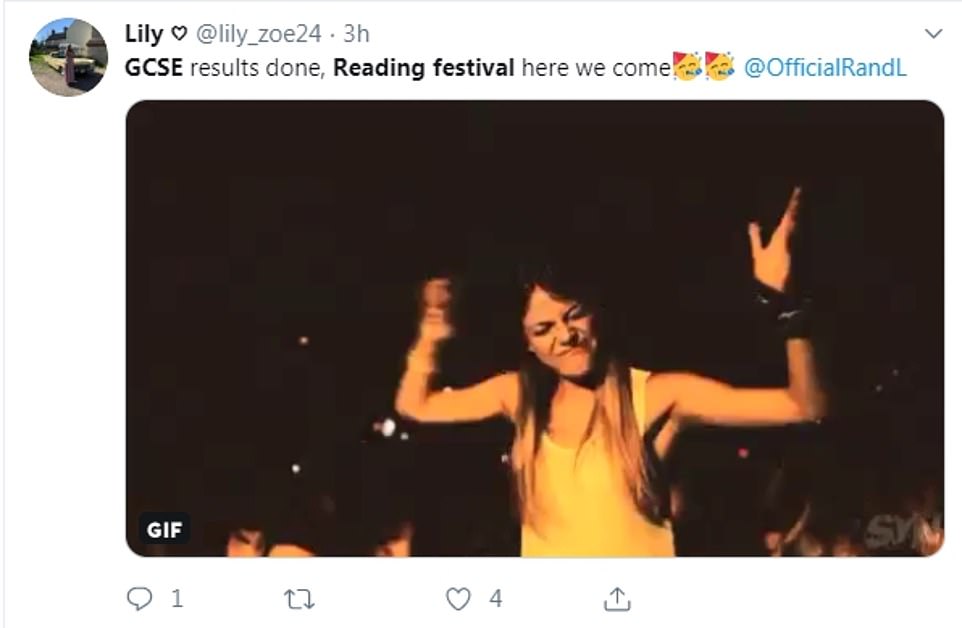 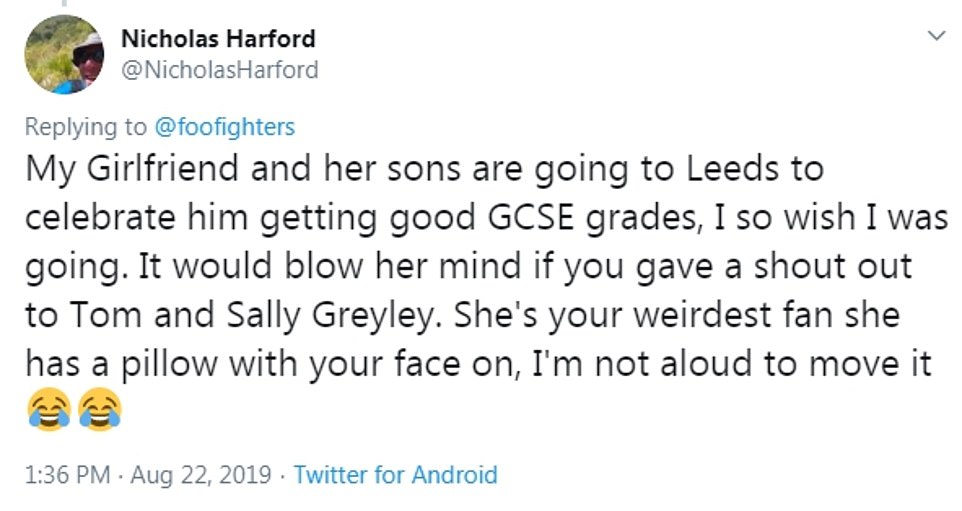