Whether we are talking early-era Steven Spielberg such as ET or Close Encounters Of The Third Kind, or more recent offerings such as War Horse or The BFG, the best Spielberg films, especially when they’re aimed at a younger audience, have one thing in common: oodles and oodles of heart.

And that, disappointingly, is exactly what’s missing from his newest production, Ready Player One. Visually it looks fabulous, and it’s enjoyably packed full of modern cultural references that take in music, film (ooh, look, isn’t that The Iron Giant) and video gaming (wow – an Atari 2600) from the past 40 years.

But emotionally it’s completely flat – the main characters struggle to make it out of two dimensions, the linear storyline is a far-from-thrilling treasure hunt, and any potential romance feels formulaic, forced and rather feeble. That’s definitely not what you expect from the director of Raiders Of The Lost Ark. 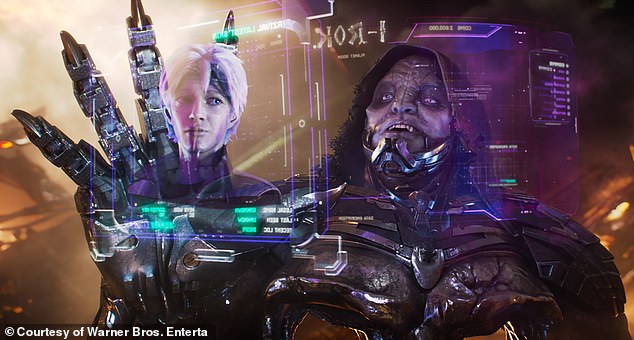 But then this doesn’t always feel like a Spielberg picture. He’s usually been at his best when breaking new ground, as with Jaws and ET – or, failing that, covering old ground in a new way, as in Saving Private Ryan and Schindler’s List – but here, in a film that exists somewhere between Tron, The Matrix and David Cronenberg’s Existenz, he seems to be covering familiar territory in a way we’ve definitely seen before. After all, it’s only three months since the not wholly dissimilar Jumanji: Welcome To The Jungle was released, and that was a lot more fun than this.

Based on a novel by Ernest Cline and co-adapted by him too, the story unfolds in the inevitably dystopian future of 2045, where rubbish-strewn trailer parks are now arranged vertically and where our young hero, Wade Watts (Tye Sheridan) – like so many others who live in ‘the Stacks’ – prefers to spend his days immersed in the Oasis rather than confronting the misery of real life.

And what is the Oasis? It’s a huge virtual world, an alternative online reality where players can do anything, go anywhere and, thanks to the magic of avatars, be anyone they like. Wade likes to be a rather cooler version of himself, Parzival, as in the Arthurian hunter of the Holy Grail. 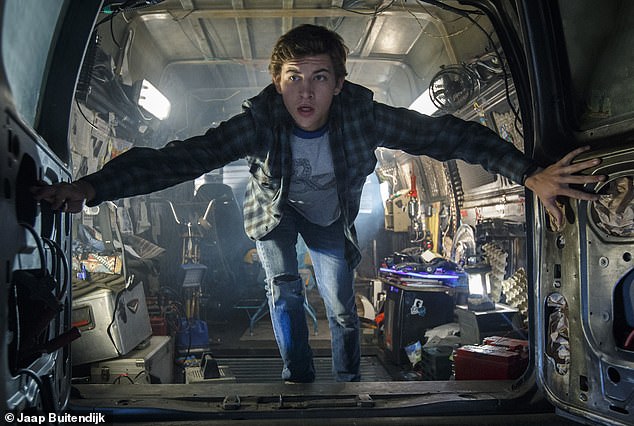 Which is handy, as the mega-wealthy founder of the Oasis, James Halliday (Mark Rylance, gracing his third Spielberg movie in as many years), has just died. Speaking via video message from beyond the grave, Halliday announces that he has hidden a hugely valuable ‘Easter Egg’ – a gamer term for hidden extra – somewhere in his online universe. Not only is it worth more than half a trillion dollars but it will give its finder ultimate control of the Oasis.

So it’s not just the likes of Wade and his new online friends – particularly the feisty, sexy Art3mis (Olivia Cooke) – who are after Halliday’s prize; it’s evil corporations with battalions of cultural researchers and specialist game-players too. The online race is on. And storywise that’s pretty much it. Hannah John-Kamen as F’Nale Zandor. Based on a novel by Ernest Cline and co-adapted by him too, the story unfolds in the inevitably dystopian future of 2045

So what are the problems? More than half the story unfolds in the Oasis, where key characters are represented by stylised avatars that owe their visual origins to fantasy comics and Japanese anime and are definitely not realistic. In other words, at least half the acting is done by glorified cartoons, which doesn’t give Spielberg’s young cast much of a chance to shine.

Amid a welter of nostalgic references to the Seventies and Eighties, one special device of the Oasis is known as a Zemeckis cube. Like the DeLorean car that floats by a little later, this, I’m sure, is meant to be an affectionate tribute to Robert Zemeckis, who directed the classic Eighties sci-fi fantasy Back To The Future, which Spielberg produced. 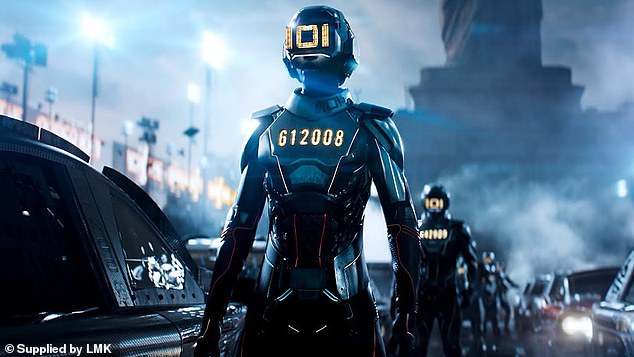 An avatar known as a Sixer. At least half the acting is done by glorified cartoons, which doesn’t give Spielberg’s young cast much of a chance to shine

But it’s another Zemeckis film, The Polar Express, that provides a clue as to what’s going wrong here. It also used state-of-the-art animation based on motion capture, and it too struggled to inject emotional life into its story. In Zemeckis’s film, the animated eyes looked dead; in Spielberg’s, the flat-feeling end result is not dissimilar.

But even back in the real world things are little better. Neither Sheridan nor Cooke sets the world alight, and when even the likes of Ben Mendelsohn are having an off day, you know a film is in some trouble. 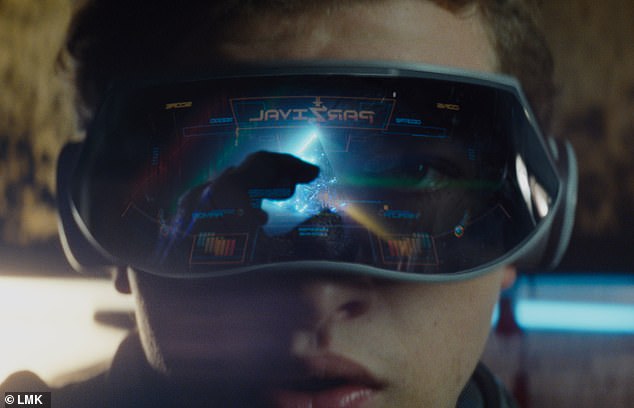 Tye Sheridan in the Warner Bros new film: Ready Player One. Wade Watts finds the first clue and starts a race for the Egg

Yes, there is still fun spotting the cultural references that take in everything from Godzilla to Teenage Mutant Ninja Turtles, from Star Wars to The Breakfast Club. But extended sequences riffing off The Shining and Saturday Night Fever seem both too familiar and too long.

Committed gamers may enjoy it more than I did, but if anyone asks me the question Ready Player One? I’d have to say, not really.

Ah, the pretty girl next door with the incurable illness… you wouldn’t think there was much mileage left in such an overcrowded genre. Then along comes Midnight Sun (12A), the movie magic slowly starts to happen, the tissues come out and it’s floods of tears all over again.

Bella Thorne is Katie, a pretty, guitar-playing teenager with a potentially fatal allergy to sunlight, who’s been kept at home by her protective father for years.

But hormones will out and love will take its course. 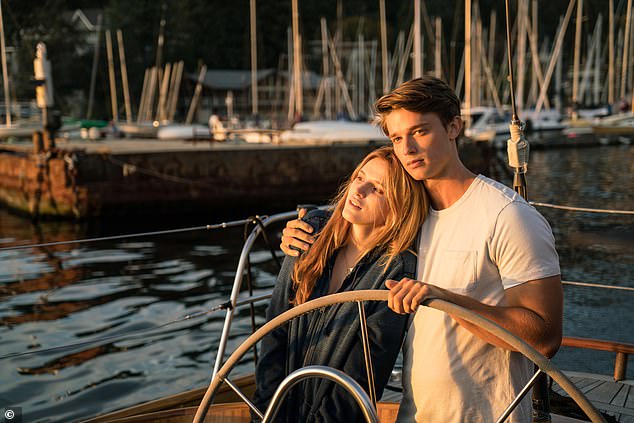 Bella Thorne and Patrick Schwarzenegger in Midnight Sun. It takes a while to get going – and to end – but is unexpectedly charming in between

This is based on a Japanese film from 2006 and has Patrick Schwarzenegger (yes, Arnie’s son) lending well-judged support. It takes a while to get going – and to end – but is unexpectedly charming in between.

Wes Anderson has already made one stop-motion classic, Fantastic Mr Fox, and now he comes close again with Isle Of Dogs (PG), set in an overcrowded Japanese near-future where the diseased dog population of Megasaki have been banished to an island. Here an enterprising 12-year-old comes looking for his beloved guard dog, Spots. Witty and with a fabulous percussive score, it’s marred only by a doggedly (sorry) slow-moving story.

Turning the conventions of the boxing movie on their head, Journeyman (15) begins with a successful world-title bout and gets more miserable from there, as veteran fighter Matty Burton (Paddy Considine) sustains a life-changing brain injury.

What ensues doesn’t always convince but definitely has its moments.

Happy End sounds like a soap opera. Four generations of a wealthy French family live in a big house. They have troubles at their construction company and at home – unfaithful midlifers, miserable youngsters, misanthropic oldsters. But a rerun of Dallas this isn’t. Happy End does everything it can to not live up to its title. By the movie’s close, your hands will be over your eyes.

War pictures, seen ’em all. Or so I thought as I sat down to Gabriela Cowperth-waite’s Iraq-set Rex. Wrong! No way is this a standard-issue guns-and-grenades actioner. Kate Mara (below) plays Megan Leavey, a troublesome marine who befriends Rex, a vicious-looking cur who even the most experienced handlers avoid. Megan can’t get enough of him. Deployed to Iraq, they put in sterling service before being injured together.

Don’t miss Otley, a late-Sixties spy send-up starring Tom Courtenay and written by Dick Clement and Ian La Frenais. The plot’s ridiculous, but there are lovely turns from James Bolam and Leonard Rossiter.