Every morning as he leaves his $4.6 million bayside mansion and heads to his $6 million office block, he has the choice of driving either the $550,000 Lamborghini or $350,000 gullwing BMW. If he and his sales team sell less 40 properties, it’s a slow month.

The unabashed self-promoter and internet personality holds a world record for selling a house in the shortest amount of time, has over 500,000 followers on social media and is currently negotiating with the owners of the hit US shows Million Dollar Listing New York and Million Dollar Listing Los Angeles to co-produce a local version.

Arriving in Australia with his family at the age of 12 after fleeing the Taliban in war-torn Afghanistan, Nasheet (pictured) said he was born in poverty 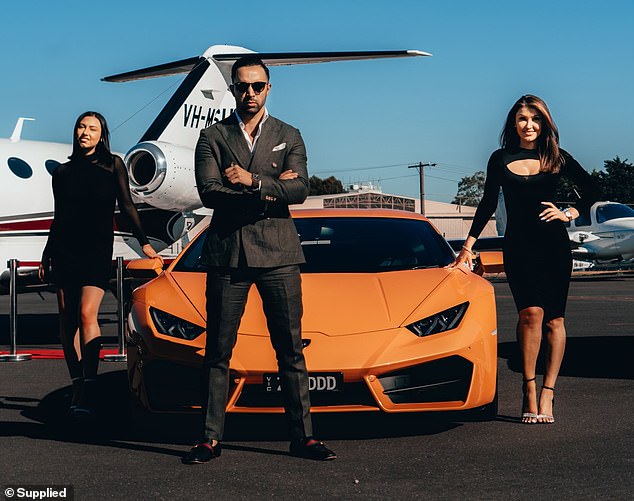 If they turn him down, he’ll just finance it himself.

That’s the way Zed Nasheet operates. Nothing can stop him, because there is another side to this 31-year-old ball of energy and enthusiasm.

One that he says made him who he is and drives him every minute of every day.

When Nasheet was six months old his family fled the Taliban takeover of Afghanistan and crossed into Pakistan. Together with parents, an older brother, grand-parents, uncles, aunts and cousins, they left a comfortable, affluent life for one of poverty and hardship.

‘There were 19 of us living in a two-room house for over 10 years,’ he says. ‘My father had been a successful accountant and financial adviser in Kabul. He had several houses and property. We lost everything.

‘I was too young to remember what Afghanistan was like under the Taliban, but my brother does, and he and my parents have told me. The Taliban took away everything. There was no music, no TV. Women weren’t allowed outside. It was like being in jail. 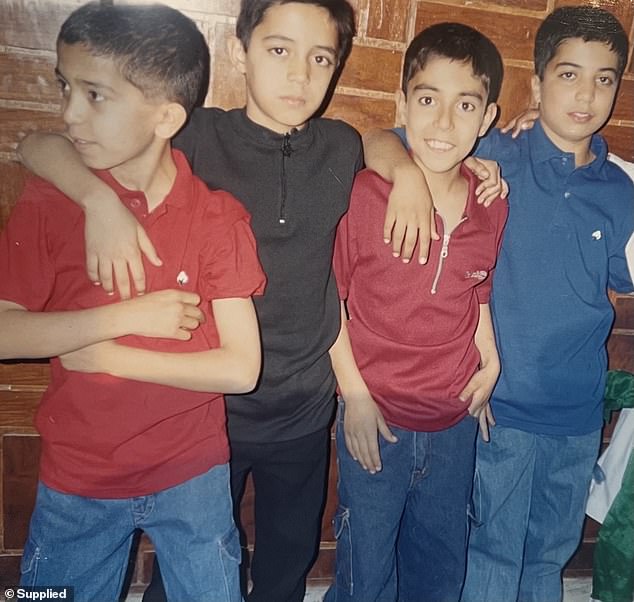 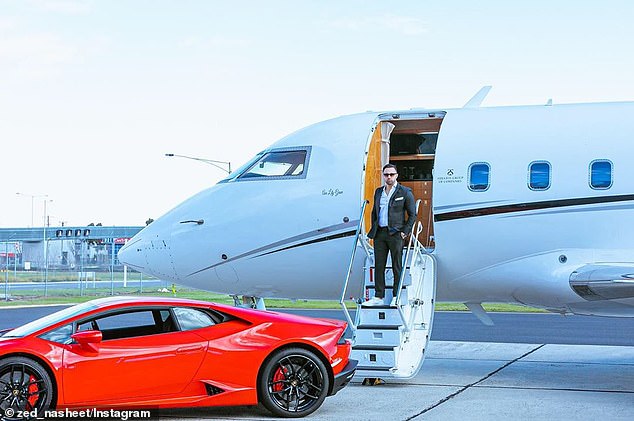 ‘We left Kabul by car and then walked for days to get to the border. When we got to Pakistan we were underprivileged; all of us crowded into this tiny house. I never saw a shower until we came to Australia. Our version of having a bath was pouring a bucket of cold water over our heads.

‘It was very hard, but it was the best thing that could have happened to me. It made me appreciate how blessed we are to live in Australia where if you are prepared to work hard you can make your own future’

‘Where we came from it was all about class and connections. Here you can be whoever you want to be.’

Zed, his parents and by then three brothers, emigrated Australia when he was 13 years old. For the first few years the land of their dreams seemed closer to a nightmare.

‘When I started school I couldn’t speak any English. I was teased and bullied every day,’ he said.

‘They made fun of the way I spoke. They used to ask me, ‘what do you use a toothbrush for?’ because I couldn’t say ‘teeth’.’

‘The way I said it sounded like ‘tits’. I’d say, ‘for cleaning my tits’ and they’d all laugh and push me around.’ 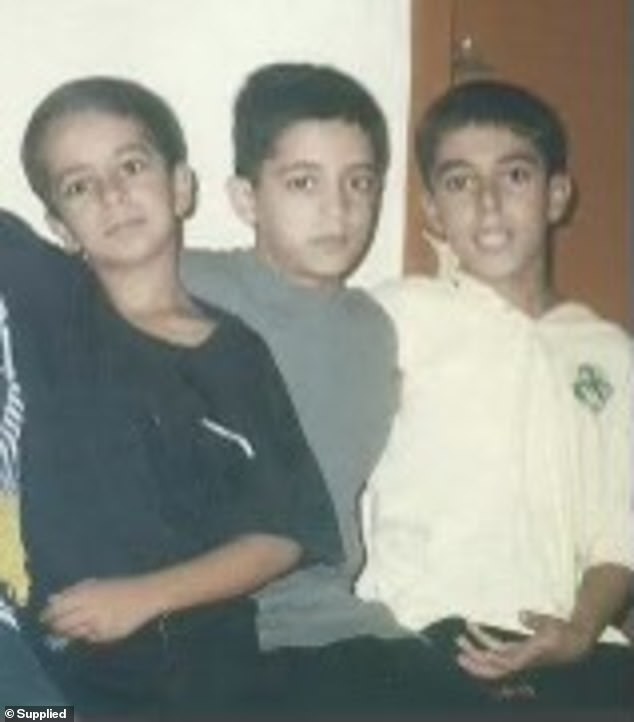 Zed, his parents and by then three brothers, emigrated Australia when he was 13 years old and described the first few years on land were closer to ‘a nightmare’ 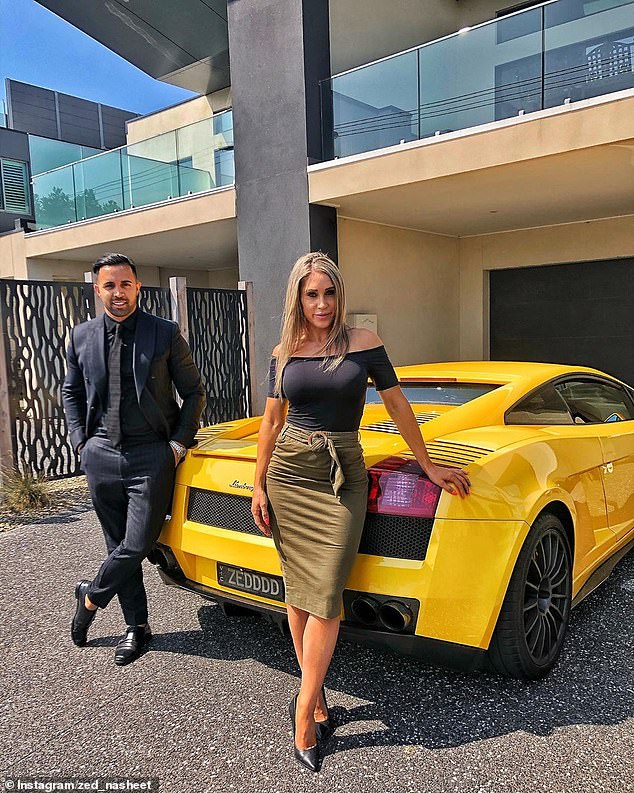 Zed (pictured, left) said he had his first job at 14-years-old selling hotdogs outside a nightclub 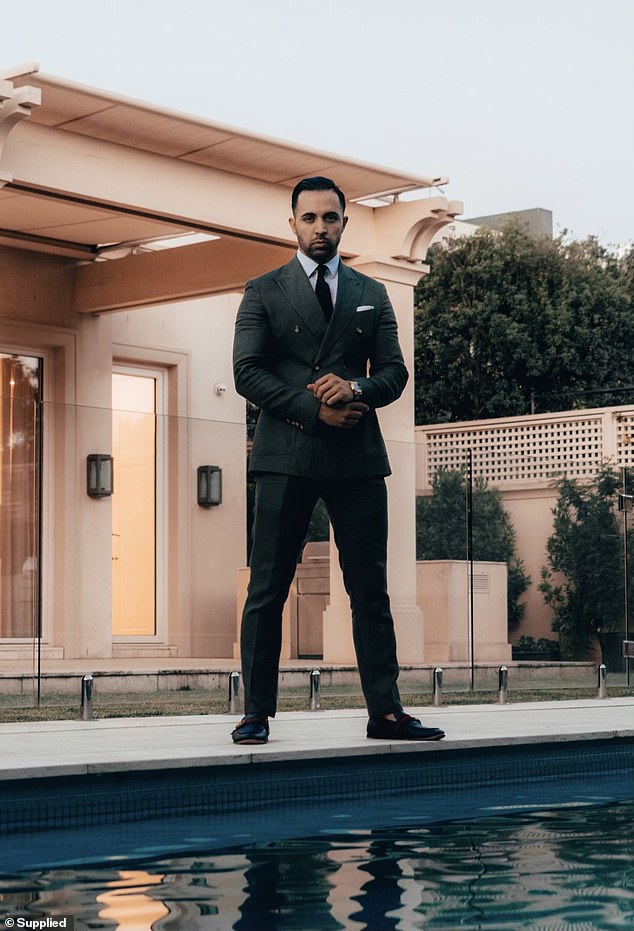 Zed says he never learnt a great deal from school, gaining far more from observing and absorbing the habits of positive role models, such as his father.

‘I’ve never seen anyone work harder than my father and that is what I have modelled my work ethic on.’

‘By the time I was 14 I was selling hotdogs outside nightclubs in Melbourne, three nights a weekend from 9pm to 6am, for $80.’

‘I was supposed to sell them for four dollars, but I learnt to negotiate. I’d talk to people when they came out of the clubs. They’d ask how much a hot dog cost and I ask them how much they were willing to pay. We’d talk and joke and sometimes I’d get an extra dollar or two.

‘That taught me about soft selling and up selling and building a rapport with your customer.’

Together with his boundless energy and enthusiasm, they were all little pillars of salesmanship that would lead to the biggest break of his life.

‘My first real job was selling mobile phones in a Telstra shop when I was 20. One day a lady came in. She was maybe 53 or 54 and she was angry. She wanted to complain about the service she was getting. She said she was leaving Telstra to go to Optus. 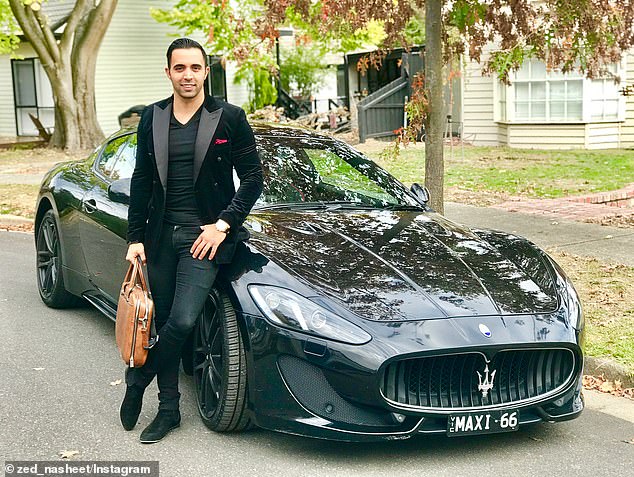 The Melbourne real estate agent (pictured) said he loves cars, and owns a Bentley and a Lamborghini 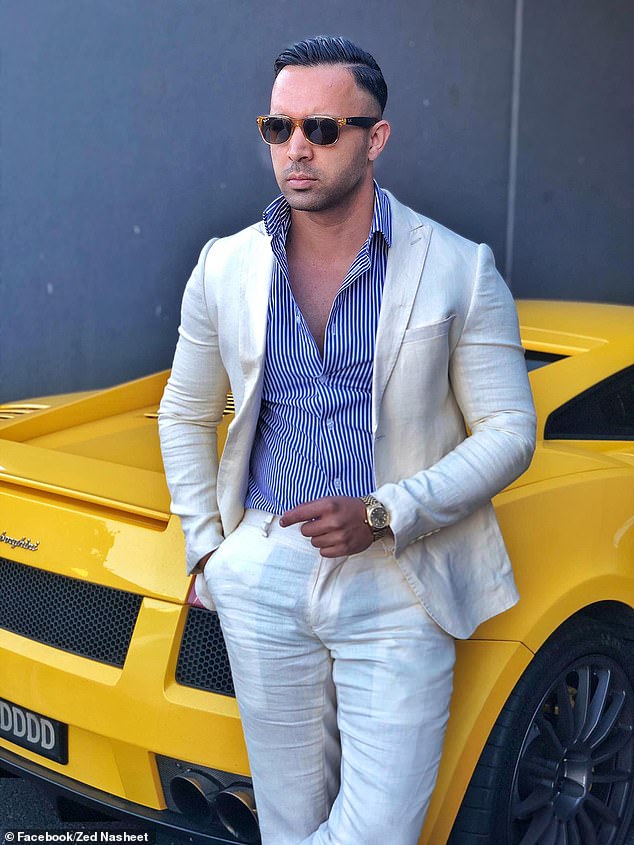 Nasheet’s highly successful company Zed Realestate has sold over $1.4 billion worth of property 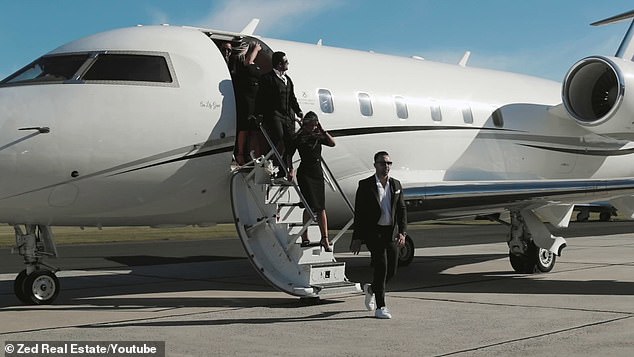 Despite his now lavish lifestyle, Nasheet revealed he only made $7,000 for his first year as a real estate agent

‘I said, ‘hold on, let’s talk about this. What do you do, what do you need your phone to do?’ She told me she worked in real estate. I had no idea what real estate was. She told me that sometimes she had to go to country areas.’

‘I told her that she just had the wrong plan, and that Telstra was the only provider that could give her the coverage she needed. I calmed her down and ended up selling her the right product.’

‘Then she said, ‘I like your energy. I like your hunger. You should work for me. I’m offering you a job.’ People might say that was I was lucky, but I say luck is when preparation meets opportunity. I’d been preparing for that opportunity all my life.’

Even so, it didn’t come easily. For three years Zed struggled as he learned the real estate game.

‘In a boom market like this, anyone can sell a house, but you have to have listings and back then when I was the new kid in the agency no-one was going to give their sale to a 20-year-old who didn’t know anything.

‘I made $7000 my entire first year. I sold just one house. For three years all I did was listen and learn, then I went to the city and sold high-rise apartments off the plan. I learnt to deal with developers and lawyers and clients and when I went back to selling residential, I was unstoppable.’ 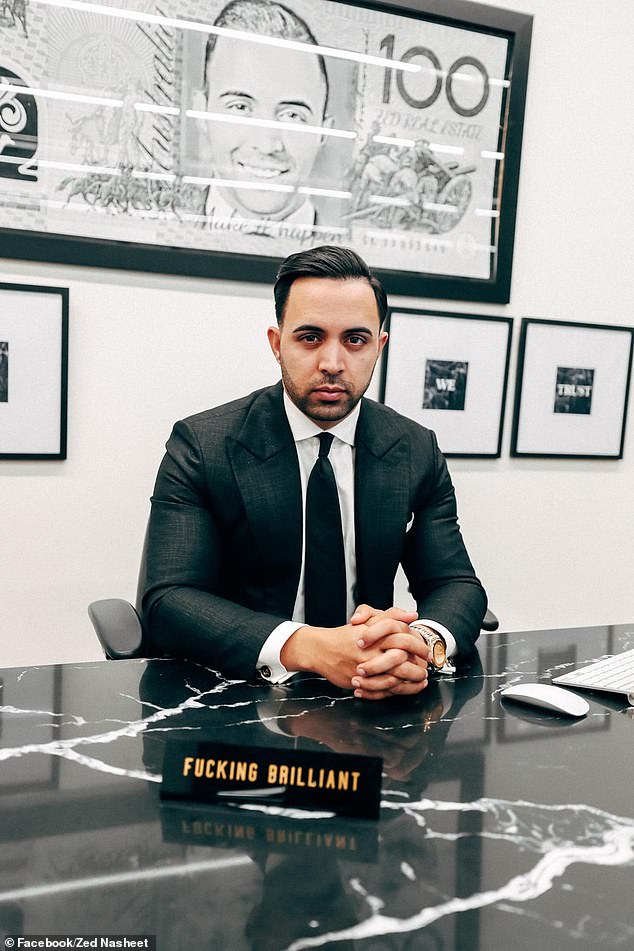 In 2017 Zed (pictured) set an industry benchmark by selling almost $40 million worth of real estate in one month. 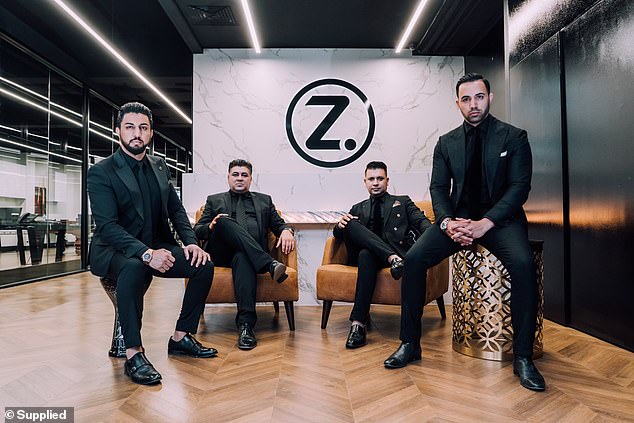 Working for leading agencies, Zed had enormous success. He was the top-selling agent for L.J Hooker in Victoria and Tasmania four years running. In 2017 he set an industry benchmark by selling almost $40 million worth of real estate in one month. He applied to the Guinness Book of Records for the title ‘World’s Fastest Real Estate Agent’ when he put a property on the market and sold it in 15 minutes.

‘I’ve done that a lot of times since then,’ he says.

Two years ago, he went out on his own, starting Zed Real Estate.

With his three brothers Maseeh, Tee and Qaiss, and a staff of 40 working with him, the agency has since sold (or ‘Zold’ as Zed likes to call it) $1.4 billion worth of property.

He recently bought a $6 million office building in the Melbourne suburb of Hampton as company HQ. It’s two storeys tall, but with typical confidence he has named it ‘Zed Tower’.

‘I have an application in for two additional floors already and we’ll grow from that. We’re a one-stop shop. We don’t just sell property, we offer finance, we have conveyancers, financial planners, IT, marketing, media, all under the one roof.’

As he talks about his plans, there is so much enthusiasm and positive energy overflowing that the words almost spill over each other as Zed struggles to control the flow of ideas. 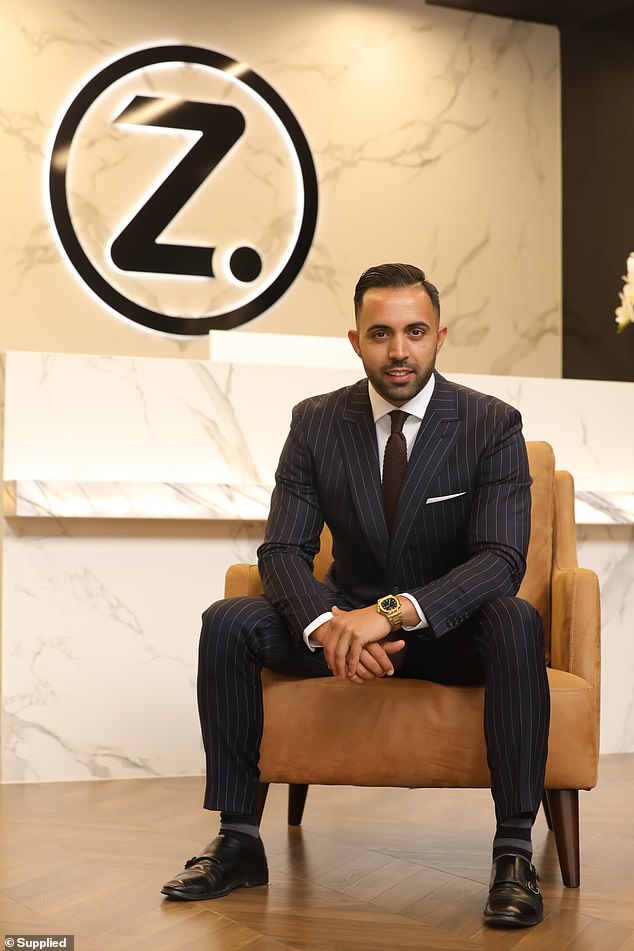 You wonder how he can possibly hope to achieve it all, but just like in that Telstra shop 11 years ago, he is in the right place at the right time.

Ask him what sets him apart from others in his field and he’ll answer with just two words: the internet.

‘It has made everything possible for me. These days 99 per cent of my business is online. At first it was about getting attention. I’d do videos dressed up as Superman or Batman. I’ve done rap-songs and dances. Now as well as getting my name out there, it is about marketing properties.

‘I’ve sold million-dollar properties over Instagram that the buyer has never stepped foot inside. We tell them and show them everything they need to know. It just makes so much sense. I can put an ad online and hope to get a couple of hundred people see it or I can put it on my Facebook page and have 500,000 view it in two days.

‘They are not all genuine buyers. Some just log on to be entertained or educated about what the market is doing, but there could be one buyer who sees the right property for them, and it only takes one. 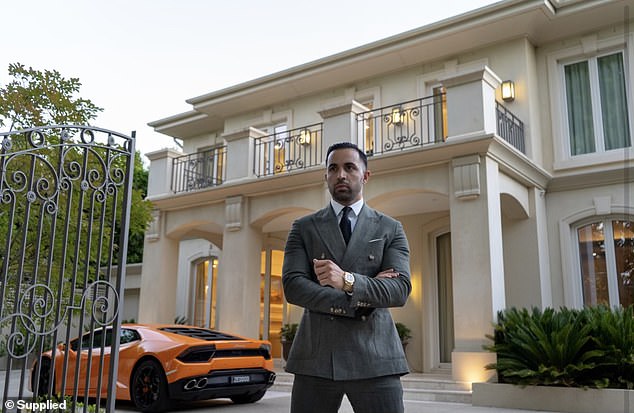 ‘Two weeks ago I sold a property in Caulfield off social media in just one hour. It happens every day.’

When I ask about recent sales, he reels off addresses and sales prices one after another without hesitation, sounding every inch the professional auctioneer he is, ‘5.5 million, 6 million, 9 million, 21 million at Brighton, house on half-an-acre at Brighton’, but one has special significance.

It cost $4.5 million on Beach Road, Black Rock, overlooking Port Phillip Bay. It’s the house he bought for himself and his parents, a lifetime away from Pakistan.

You can see it if you drive past. It’s hard to miss.

It’s the one with the ‘Zold By Zed’ sign permanently out the front.