Real Housewives of New Jersey star accused of running a $1.7m luxury car scam is collared in the UAE

A flamboyant New Jersey businessman accused of running a $1.7million luxury car scam has been captured five years after he was added to the FBI’s Most Wanted list.

Afzal ‘Bobby’ Khan, who appeared on ‘The Real Housewives of New Jersey’, had been on the run since October 2014 before he was arrested in the United Arab Emirates last week.

The 37-year-old, originally from Edinburgh in Scotland, is accused of duping customers and financial firms at a car dealership and faces up to 100 years in prison if convicted.

Khan opened the Emporio Motor Group in 2013 and maintained a high profile, appearing on the reality series alongside stars Joe and Melissa Gorga and Jacqueline Laurita. Members of the show’s cast were also among his clients.

He was added to the FBI’s 10 Most Wanted ‘white collar criminals’ list and a $20,000 reward was put up for him. The poster said: ‘Khan has a scar on his right arm. He has ties to and may travel to the United Arab Emirates, Canada, the United Kingdom, and Pakistan.’

Afzal ‘Bobby’ Khan, who appeared on ‘The Real Housewives of New Jersey’ had been on the run for five years when he was arrested in the United Arab Emirates

Special Agent in Charge Gregory W. Ehrie, of the FBI’s Newark field office, said: ‘Mr Khan came to the sobering reality that he could not outrun the FBI.

‘People who flee to other countries to avoid prosecution only delay the inevitable and live every day with the knowledge that we are still in pursuit. Mr Khan obviously reached the conclusion that it wasn’t worth it.

‘The Newark field office would like to thank the dedicated members of law enforcement whose hard work and determination forced the hand of this fugitive and will now bring him to justice.’

Khan is now being held in Bergen County Jail in New Jersey while he awaits trial.

He has been accused of a massive fraud involving super cars including Lamborghinis, Porsches and Rolls Royces.

He is accused of obtaining loans from a bank for cars that he never delivered, but for which the purchaser was still responsible.

He also said to have obtained loans for cars that were delivered, but for which neither he nor Emporio had title documents.

As a result, the purchasers of these cars were liable for the loan, but could not register the vehicles. 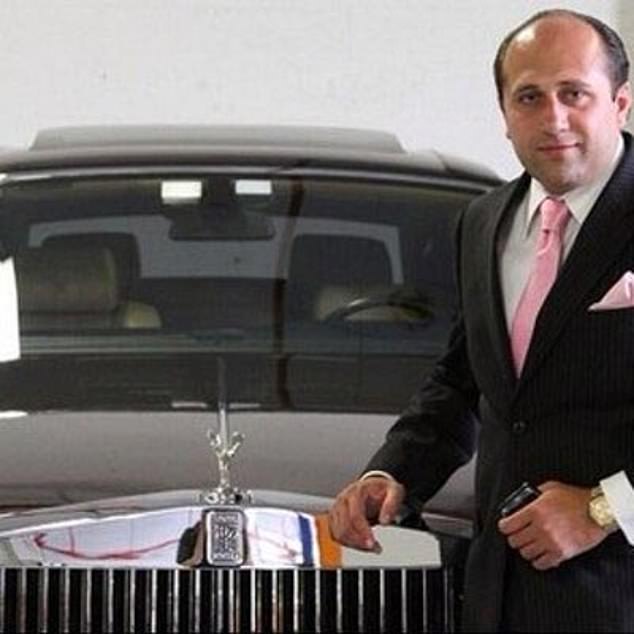 The 37-year-old, originally from Edinburgh in Scotland, is accused of duping customers and financial firms at a car dealership and faces up to 100 years in prison if convicted 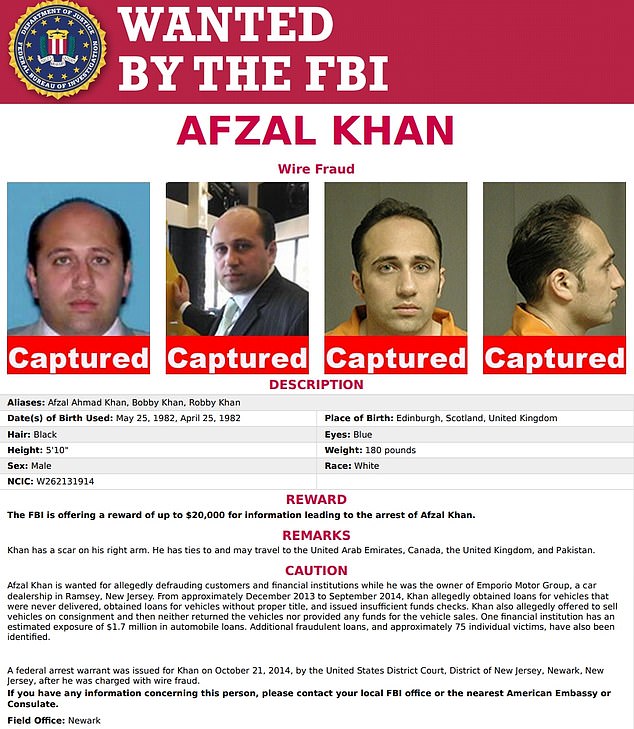 Khan, who was placed on the FBI’s 10 Most Wanted ‘white collar criminals’ list, is now being held in Bergen County Jail in New Jersey while he awaits trial

Khan is also alleged to have offered to sell cars for customers, and then neither returned the cars nor provided any money from car sales.

He has been charged with five counts of wire fraud and is said to have fraudulently obtained 21 loans totaling more than $1.7 million.

Each count of wire fraud is punishable by a maximum potential penalty of 20 years in prison and a fine of $250,000.

Since the charges were brought investigators say they have identified 75 more victims.

Khan appeared on American television in November to say he wanted to surrender, but claimed his offers were being ignored by prosecutors.

In a video phone interview with the Fox News network, Khan said he had been hiding out in a country which has no extradition treaty with the US.

He said he would hand himself in if his wife and two daughters are flown back to America with him – allowing them to avoid fines for overstaying their visas in the country they fled to. 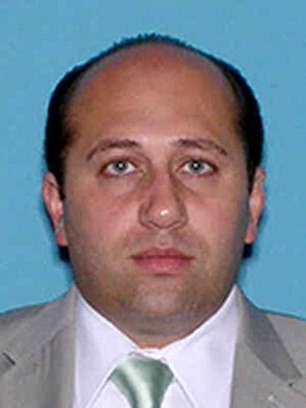 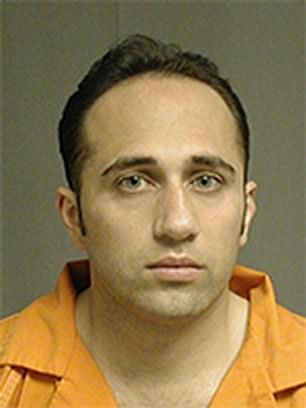 He said: ‘What more do I have to do? I’m basically practically begging you. I’m a fugitive from justice saying ‘arrest me’.

‘Let me walk into an embassy. You’ve got a military jet going home, throw me in with my wife and kids.’

Khan was born in Edinburgh to Pakistani parents and moved to America more than 20 years ago. Police and the FBI attempted to arrest him at his New Jersey home in October, 2014, but could not locate him.